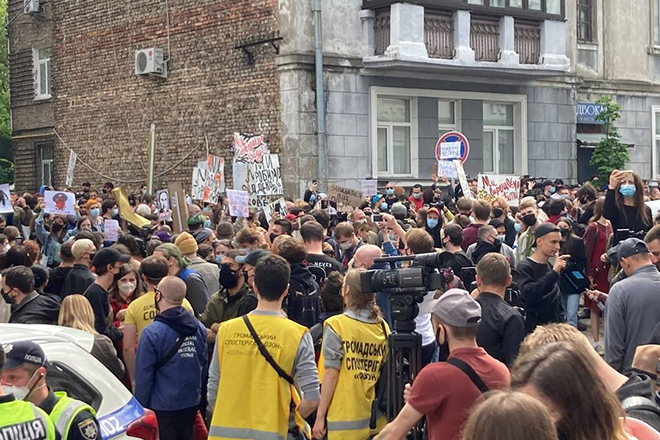 Protesters in Ukraine have taken to the streets of Kyiv to oppose the police’s use of violence and illegal detention of musicians.

On May 21, fifteen organisations in the arts community in Podil, Kyiv, collectively stood against the police attacks.

The area has reported police raids for over six years but the last twelve months have seen an increase in their frequency and brutality.

Nastasia Pustova, one of the organisers of the protest, said: “Creative communities are pressured, their members are discriminated against and police crimes go unnoticed and unpunished for years.

“This protest was the first local initiative of its kind. It unprecedentedly united very different clusters of local culture; activists to both the left and right as well as Podil locals, who want safety for themselves and their friends.”

Local film director Ania Perepelytsia added: “Podil is a vulnerable place in Kyiv because it is the creative cluster of the city.

“There are many venues and clubs where electronic music is played. Such places are easy to stigmatise and break into under the explanation of looking for people selling drugs.”

Illegal detention on May 18/19

The protest was organised following the savage attack on musician Dmytro Bugaichuk at Kyrylivska 47B on the night of May 18/19.

Bugaichuk was beaten to the point of unconsciousness by members of the Municipal Guard.

The Guard are known for their attacks on activists and journalists in the city.

Read this next: How Cxema parties are changing the face of the Ukrainian electronic scene

Members of the arts organisation Kosmos Tabir said: “When Bugaichuk questioned the purpose of this demand, an armed special forces officer punched [him] in the nose, threw him face down on the ground, and was asphyxiating him, pressing him to the ground with their knees.

“This all was happening while he was lying in a puddle of his own blood pouring out of his broken nose. Dmytro lost consciousness.”

Eyewitnesses reported that Bugaichuk was then detained for three hours until a lawyer came to release him from police custody.

The police later released a statement saying Bugaichuk was being charged with drug possession.

Kosmos Tabir added the police had turned off their body cameras, claiming “their batteries died.” 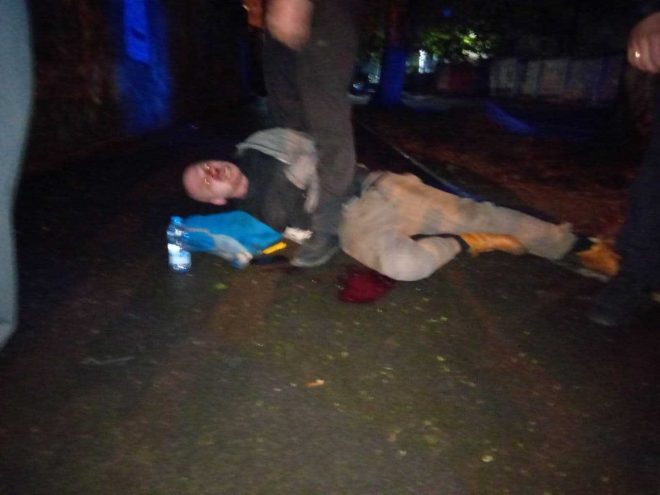 This occurred only days after another police raid at the arts centre at Nyzhnoiurkivska 31.

On May 15, 50 officers broke into the former factory and stopped two concerts, despite the events abiding to COVID-19 regulations.

Events of up to 50 people are allowed in Ukraine as long as they maintain one person per five square metres.

Pavel Plastikk, resident at Closer, said: “Officers broke into the territory, damaged the property, turned off the music and lights, put the barmen in cuffs and threw the visitors to the ground.

“They didn’t answer the questions, didn’t introduce themselves and say why they were there.”

Read this next: "A little magic world": How Strichka turns Closer into a party of endless discovery

Daniel Nevzgliad is the bar manager at 20ft Radio, a venue who were planning a summer opening party.

He said: “They started to act aggressively without any explanations. They came to one of the radio creators, a 55-year-old dad of my friend and grabbed him. He fell to the ground.

“I stayed at the terrace trying to defend our small bar, radio and equipment, but the police tried to push and make us leave the area.

“It’s not the first time such aggressive actions have taken place on the radio and other local music communities. The police act like they own the place and terrify the youth.”

Protesters have reported a number of similar incidents within Podil since the pandemic.

Members of the Municipal Guard and police have allegedly broken into clubs such as 2c1b, Keller Bar Club and HVLV.

Events at HVLV are disrupted almost daily, with the most high profile incident seeing riot police shut down a lecture on police brutality at KyivPride.

HVLV has already won a number of court proceedings against the continued raids.

The bar’s co-founder Andy Yankovskyi explained: “We will not be able to change the whole system at once because this system has been built for years, even decades, on the principles of bribery, violence and abuse.

“What we can do is act locally, influence the policy of our district as a local community and change a lot step by step.”

Friday’s protests saw residents of Podil take to the streets, calling for an end to the ignoring of legal protocols by the authorities.

They also want the dismissal of Pavlo Vasylenko, the Head of Podil National Police department, and the bringing to justice of all law enforcement officers involved in the illegal raids and beatings.

Read this next: Brave! Factory brings a vibrant and free atmosphere to a forbidding industrial location

Ania Perepelytsia finished: “I’m tired of the stigmatisation of everything creative and cultural.

“I’m tired of feeling like a criminal if I just go to a club. I don’t want to meet these guys in uniform and remind them again of my rights.

“We came to this to show that there are many of us and we will not tolerate these actions.”