A massive thunderstorm hit the Ukrainian capital the week before Mixmag arrived. Roads became rivers bobbing with abandoned cars, steps down to subterranean walkways were transformed into gushing waterfalls, and on one street a drainage system collapsed into a sinkhole. The apocalyptic scenes must have been of concern to Brave! Factory festival ticket holders. Heavy rain can be the undoing of any outdoor event, and reports from last year’s debut festival indicated downpours made the experience bittersweet for many. Some organisational issues leading to a lengthy entrance queue and confusing site layout also didn’t help matters.

Mercifully, the skies above Kiev are clear as we land at Boryspil airport. The sun glows a brilliant yellow against the pale blue sky in a fittingly Ukrainian colour scheme. All trace of last week’s watery devastation appears to have vanished from the city, and there’s a relaxed atmosphere punctuated by the clatter of streetside cafes and bars doing bustling business. And as the weekend progresses, Brave! Factory unfolds in similarly spotless fashion.

The festival, a venture from the team behind Kiev’s acclaimed Closer club, has the makings of an intense and industrial session. The music kicks off at 8pm on Saturday and runs non-stop through to the early hours of Monday. The setting is a 50,000 square metre patch of functioning Metro factory on the south-western edge of the capital, characterised by austere structures and dusty walkways. But the pervading mood of the weekend is vibrant and free, helped by interesting musical programming, an easy-going clientele, and colourful decorative touches from the organisers. 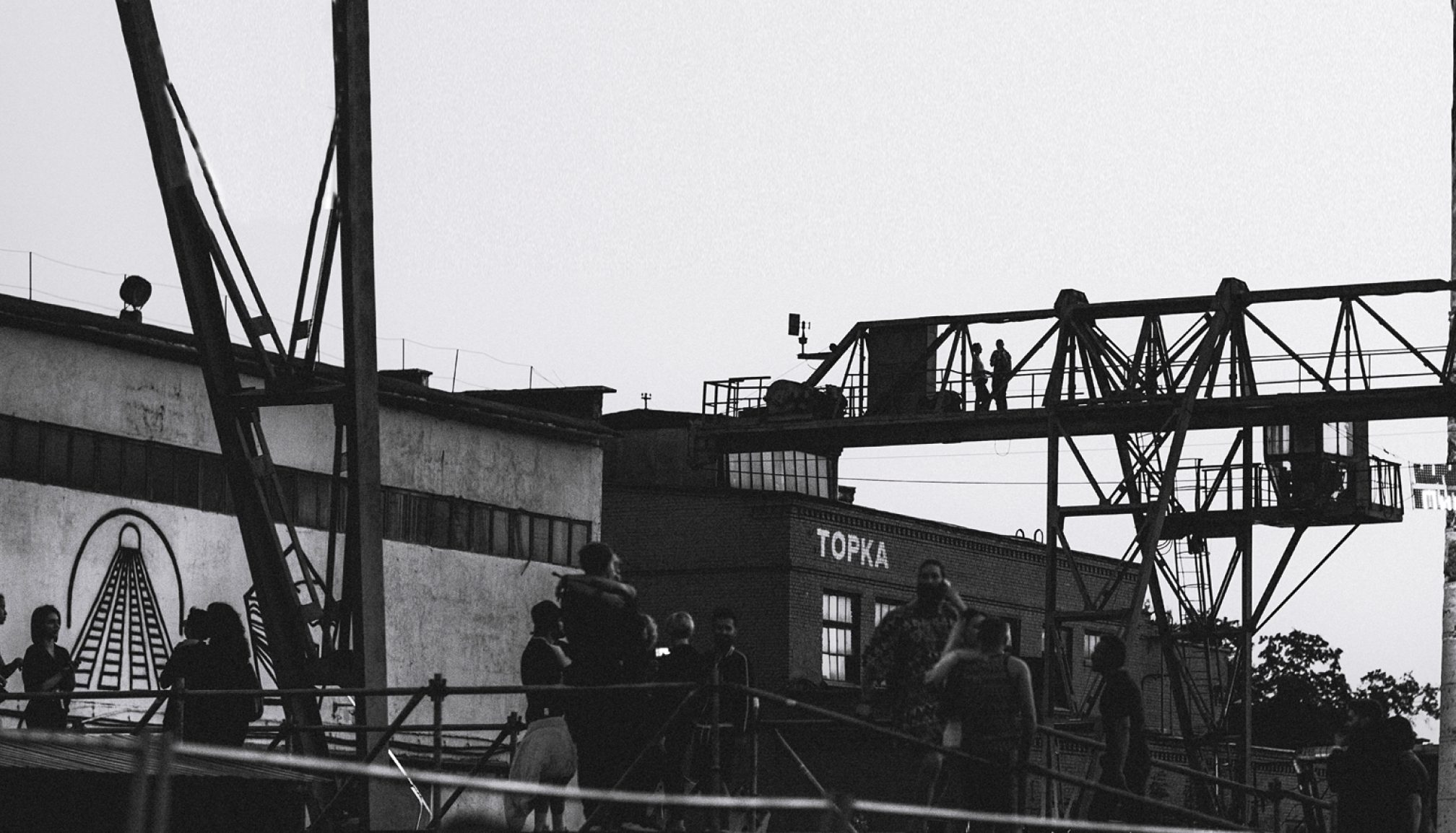 Lessons have clearly been learned from last year. There isn’t a hint of a queue as we breeze through the entrance on Saturday evening. Five of the six stages have been relocated to make the festival easier to navigate, and clear signage directs punters to the various dancefloors along illuminated pathways. Crossing a makeshift bridge formed from the cold steel body of a crane but doused in soft neon hues feels strangely luxurious.

The best dancing space is Topka, the factory’s former furnace and a tall room with an elevated metal platform running along the back wall. Mykki Blanco makes full use of the space in an energetic set that sees him forming circle pits on the floor before clambering across windowsills and gyrating precariously on the room’s upper level, all the while delivering flawless bars and rousing stage chat. At the show’s climax he rips off his green wig and white top, swirls them furiously in the air and screams at the crowd to “Make some fucking noise”. The response surely caused more than a few raw throats on Monday morning.

Yves Tumor follows and is arresting in a wholly more demented way. The Tennessean experimental artist looks possessed throughout the performance, body convulsing, face obscured at points by a black leather mask. The soundtrack is raw and uncompromising, pneumatic beats underpinning harsh floods of white noise. Leaping into the crowd he mirrors the chaos with movement, flinging his body around recklessly while members of the crowd hold out their arms to keep him smashing into the floor. It’s an intense, challenging performance that a less open-minded audience might struggle with, but at Brave! the room is packed until the end. Outside, people take a break from coolly dragging on cigarettes to give us gushing reviews of the show.

The crowd at Brave! is strikingly cool – but friendly. Outfits on display include a man in a skimpy fishnet top, a woman in a flowing emerald green dress fit for a Disney princess, and more than a few people styled like SoundCloud rappers with vests bearing heavy metal logos and forearms covered in sleeve tattoos.

It was Ukraine’s Independence Day the day before Brave! started and a long parade of heavyweight military vehicles and armed soldiers moving through the streets of Kiev provided an intimidating reminder that we’re in a country with an active war zone in the east. At the festival it feels very distant; there isn’t a hint of tension in the air. During the warm daytime people take time out to lounge in shady hammocks, or relax to music in the lush garden area decorated with leafy vegetation and hosting a stall selling green tea and incense. There Melina Serser plays one of the stand-out sets of the weekend, laying a perfect soundtrack of soothing ambient and trippy abstract gems like HoeHLE’s ‘Why Me’. Nicolas Lutz and Binh wander in, fresh from whipping up a storm in Topka with a five-hour afternoon session of bouncing basslines and searing melodies, and sit down to chill with Dyed Soundorom to zero fanfare from the laid-back punters. 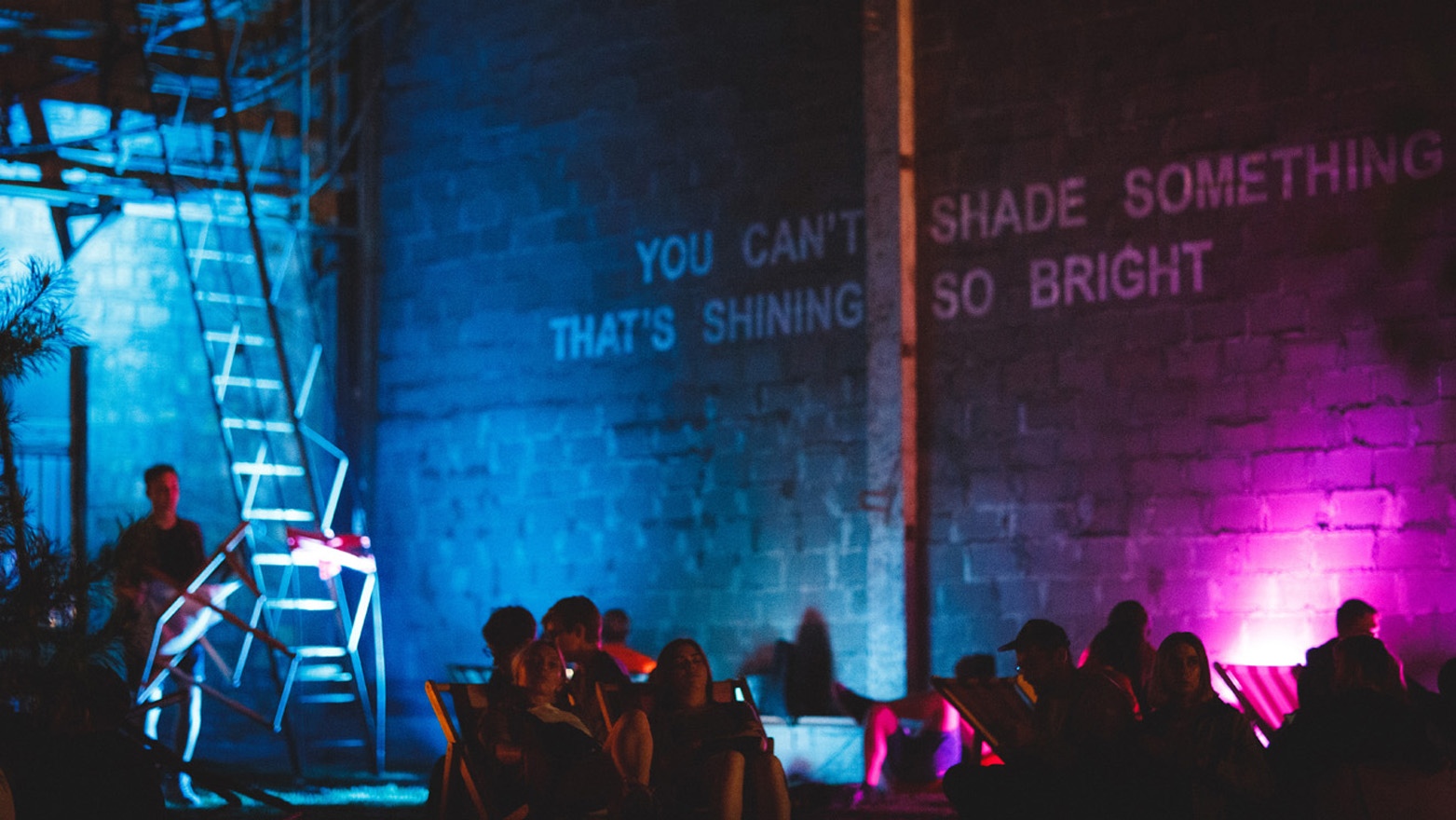 Mykki Blanco is another of many artists who stick around for the long haul after performing. “The festival felt like four different mini Berghains all in a row. I think I danced for about 24 hours entirely,” he tells us. And the sizeable contingent of Berliners present, along with travellers from further afield, proves Brave! is offering something fresh and exciting to the European circuit. “The territory has potential for at least ten stages, perhaps more,” Brave!’s PR director Alisa Mullen tells us. There’s plenty of room for the event to grow.

The nighttime vibe is loose thanks in part to the generous bar measurements where singles aren’t even an option, but never edgy. The starkest stage is the vast Angar, where DJ Bone steps up at 7:30am to a busy dancefloor and chops through pounding techno and ‘Strings Of Life’ in a flurry of mixing wizardry while his wife dances by his side. Later that night, at the more intimate outdoor spot Container, Anna Haleta and Savage fire through a set of odd-ball electro heaters while a dancer in a kimono floats around the crowd with a hand fan wafting cool air into sweaty faces. In the crisp dusk of Monday we see a burly topless man giggle and stoop down to ruffle the fur of a stray dog that has wandered into his path, before it disappears through a gap in a metal fence. 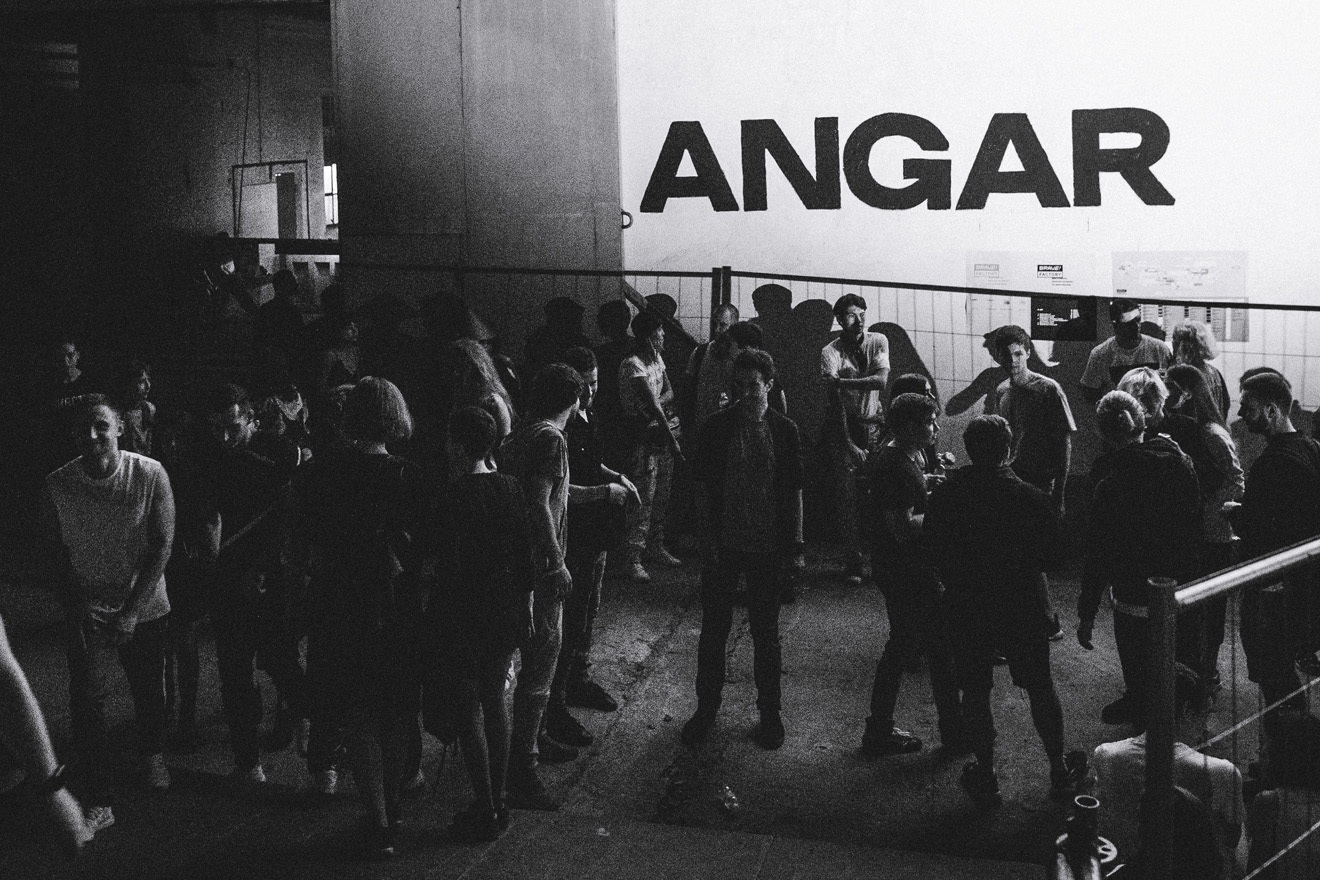 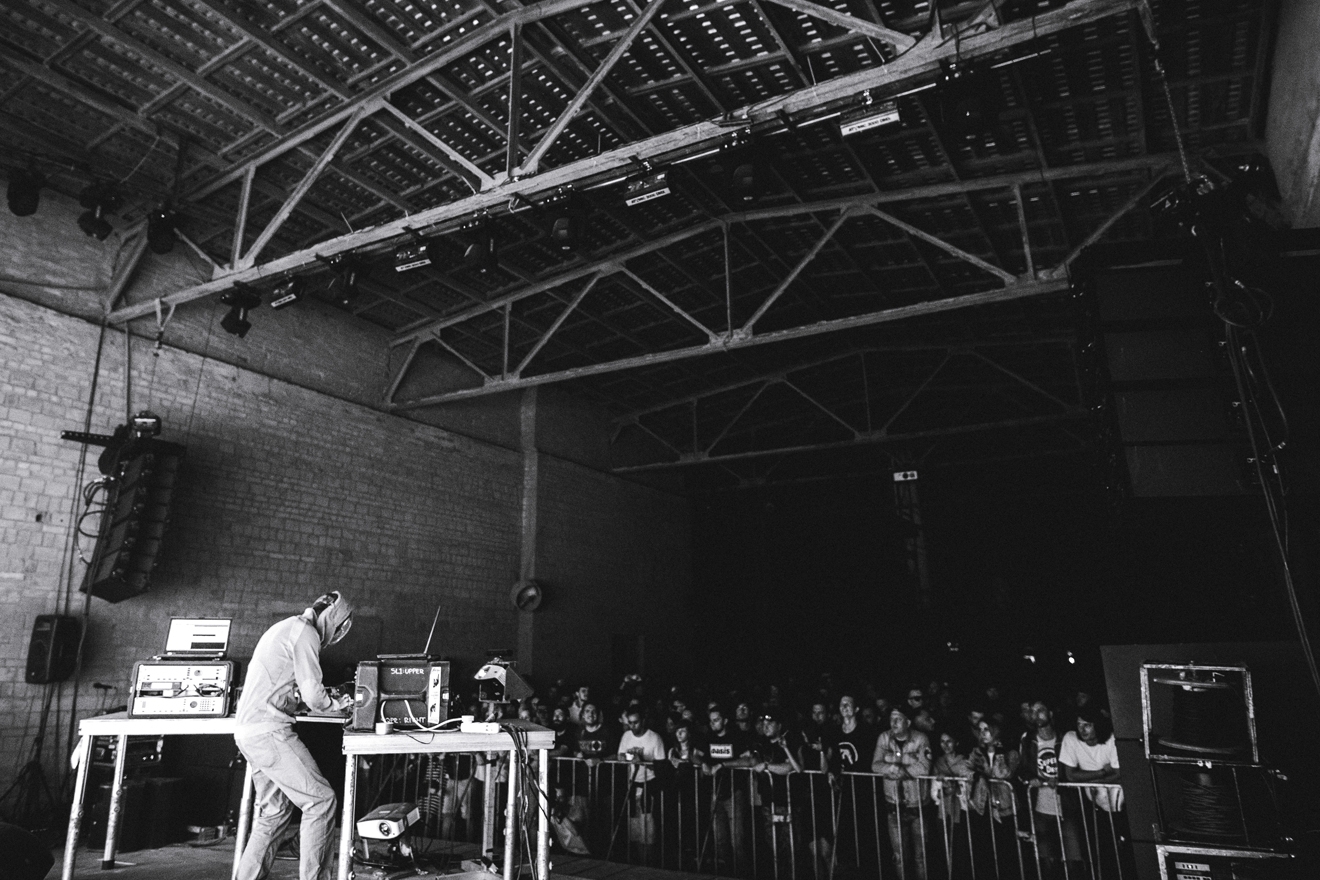 “I really love these kinds of spaces, the kind of run-down and abandoned factory buildings from the Soviet era that can be given new life by parties,” says Closer and Brave! resident Borys. “It’s a special context, being there while listening to your favourite artists with the energy of a thousand music lovers dancing; it’s something that once upon a time we could only dream of.” For many at the festival, Brave! is a dream come true.