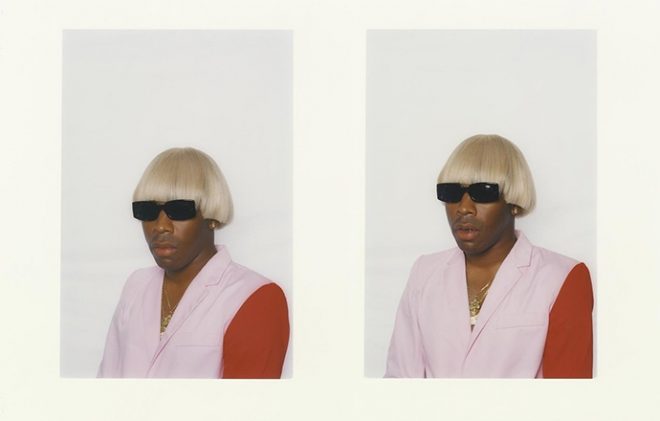 A pop-up gig thrown in Peckham by Tyler, the Creator on Sunday afternoon was cancelled due to 'rowdy' fans.

In 2015, the Home Office barred the rapper from entering the UK for somewhere between three to five years due to offensive language on his first two studio albums, 'Goblin' and 'Wolf'.

However, as revealed by The Guardian, the ban "no longer applies and he is able to enter the UK legally."

On Sunday morning, Tyler tweeted a video (see below) of himself shadowboxing outside Buckingham Palace, clad in a blonde wig and colorful suit.

The tweet also suggested he would perform somewhere in the capital at 3pm, later confirming the venue as Peckham's Copeland Park/Bussey Building complex.


Tyler fans eventually packed out the area to max capacity, though the show was cancelled just before 3.30pm.

This was one of the reasons Tyler got locked off. pic.twitter.com/7MM4O8q4Wr

In a tweet, since deleted, the rapper announced, "too rowdy, cops cancelled it, go home, I tried, the gate climbing nail in the coffin, they got nervous, too bad was a cool idea but hey."

However, as reported by the Guardian, the Metropolitan police claim it was the venue that cancelled the gig.


Tyler later clarified via Twitter, 'sucks it was too wild (out of excitement) but I am coming back trust me) and followed up with an Instagram post, which you can check out below.

Also in attendance was Off-White's Virgil Abloh, who was spotted rocking a new Louis Vuitton jacket..

nobody could get out after Tyler cancelled the gig so virgil abloh and I had to escape under this gate pic.twitter.com/P0aCHH4lnZ

The Odd Future man released his fifth studio album, 'Igor', on May 17, a day before his scheduled London performance.