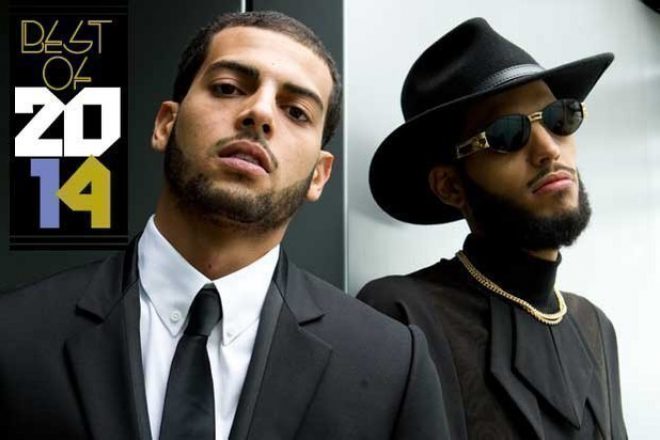 Mixmag's Top 20 DJs of the year are voted for by Mixmag staff and contributors and we feel the list represents the broad spectrum of dance music that we cover day in, day out. So here you'll find marquee names as well as underground heroes

1. The Martinez Brothers
No other DJ or DJ duo encapsulates house music 2014 like the crown princes of DC10.

2. DJ Harvey
Is there anyone who doesn't love him? The veteran disco DJ enjoyed an Indian summer this year: his show at James Lavelle's Meltdown festival was the hottest ticket in dance music, his 'all night long' at Fabric was sublime and his sunset set at Dekmantel can only be described as mesmerising.

3. Skrillex
After a year in which Sonny Moore pretty much repped dance music single-handedly at Glastonbury's big arenas (and blew the doors off the Other Stage), while his music and style evolved across a series of incandescent festival appearances, he gained the recognition as a DJ that he deserves.

4. MK
There were few bigger draws in clubland in 2014 than Mark Kinchen. From his student tour to his festival slots to a roadblocked London show to mark his Mixmag cover, MK's sheer charisma has guaranteed a pop star reception everywhere he's played, while each party more than justified the hype.

Long one of the most well-loved DJs in house, Prosumer's incredible Fabric mix this year showcased his old-skool DJ skills to the widest audience yet – while an unforgettable set at ADE put the seal on the big man's biggest ever year.

Arguably the DJ standout of this year's Burning Man, the Italian techno star smashed it around the world in 2014 – particularly in the US – and her set at our Mixmag party in June in Barcelona was heartbreakingly good.

Now in his fiftieth year (and his 32nd as a DJ) Papa Sven outdid himself in Ibiza and beyond – and invited 15,000 lucky people to his unforgettable birthday party with Timewarp in Mannheim in November.

His planet-straddling Klockwork tour took the lantern-jawed techno star to a worldwide audience, with his sets at Sónar and London's Village Underground a particular highlights. And playing the Grandstand theme in Glasgow, obviously.

UK readers may scratch their heads, as Diplo's only been on our shores this year as a member of Major Lazer. But worldwide he's been DJing his huge Mad Decent block parties, plus stadium-busting shows at Ultra, EDC, Tomorrowland and Stereosonic. And when Hollywood needed a DJ for 22 Jump Street they chose Wes.

This year Daley Padley went global, punctuating headline appearances at Europe's biggest clubs and festivals with three separate tours across North America and Mexico and every date of Stereosonic in Australia. He can justifiably claim to be the UK's biggest DJ export.

Ben Klock's Berghain partner-in-crime made a seamless leap from warehouse to festival main stage at events like Serbia's Exit this year – and released a stunning Fabric comp. He still gets really nervous before every gig, he told us back in September – maybe that's the secret...

Having started 2014 as she meant to go on at Circo Loco's New Year's day party at DC10, Catherine Britton's sophisticated techno has been a highlight of the year's hottest clubs and events – from Robert Johnson in Frankfurt to Exit in Serbia and Circus in Liverpool.

Long the don in his home country of South Africa, in 2015 – thanks in part to an online documentary but mostly because of his incredible Ibiza sets at DC10 – this year Black Coffee went worldwide.

Our August cover stars were yet another mainstay of DC10, the French DJ supergroup of Shonky, Dan Ghenacia and Dyed Soundorom somehow finding time to drop their debut album in between ruling the summer across Europe and beyond.

He may seem like the default drum 'n' bass choice every year, but 2014 has simply been Andy C's biggest to date. His 'Alive' tour was a relentless schedule of sold-out clubs and massive festivals, and along the way, it felt like he became d'n'b's first superstar DJ, cultimating in a sold-out Brixton Academy show.

For sheer, consistent DJing excellence, no-one outdid the Innervisions boss this year. His six-hour b2b with Âme at Fabric's birthday was simply mind-blowing. No wonder his 'Lost In The Moment' parties sell out months in advance.

The most exciting new talent in dance music? The unclassifiable Kaytra brought raw excitement everywhere he played – but his Mixmag Live party in London to launch his November magazine cover was like a glimpse of the future.

Between his festival-slaying Can U Dance b2b project with the equally brilliant Oneman, his BBC Radio 1 Essential Mix, his 13-week XOYO residency series and of course Mixmag's Bugged Out! chalet party, it's been a big one for Jack Revill.

Residencies at Fabric, Output, Trouw and Panoramabar, a US tour, a Mixmag cover, a boat party with Dubfire at WMC, soldout 'Big Tittie Surprise' party at Sónar, Glasto marathon (Beat Hotel, Wow, NYC Downlow and the Arcadia Spider), Unicef's Halloween bash, Kate Moss's birthday party: it was a huge year for the Trox.

The all-action EDM man has his critics, but his parties at Pacha Ibiza this year were by far the most popular regular event on the island – and his 3 Are Legend hook-ups at Tomorrowland, Creamfields and Miami were off the scale.