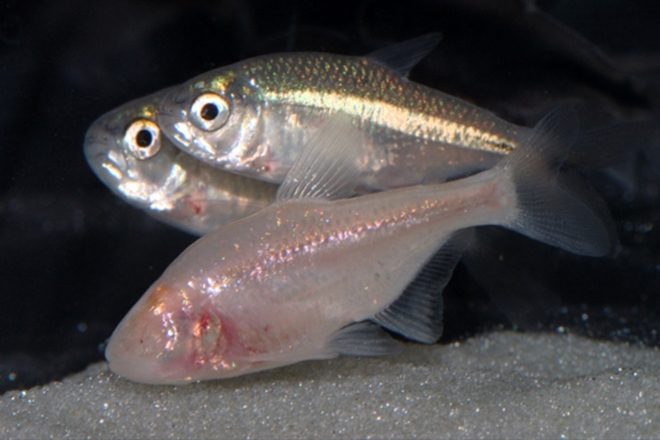 According to a new study published on eLife this past week, a team of neuroscientists at Florida Atlantic University have found “the first evidence of genetic and neuronal changes that contribute to the evolution of sleep loss”.


This new scientific discovery comes thanks to a little fish known as the Mexican tetra. This species of fish exists in two different populations: the surface dwelling genus and its blind, cave-dwelling counterpart. With regular access to sunlight, the surface population requires around eight-hours of sleep (similar to that of humans) while the latter group requires a total of two-hours every 24 hours.

Focusing on a neuropeptide called hypocretin or HCRT, researchers found that the cave-dwelling species of fish contain more HCRT proteins than the species’ close-relatives who favor the sun. By exposing both populations to drugs that block HCRT receptors, it was discovered that the evolution of sleep can be contributed to a species’ neural and genetic difference. On top of this, the discovery proved that these differences in sleep behavior can be altered with the use of drugs.

While the above statement seems like a statement of the obvious (ie. Nyquil and Adderall), this new insight regarding the cavefish’s mechanisms which allow it to endure little sleep - without any physical consequences - may eventually lead humans towards the simulation of a drug that can help us do the same.

In an interview with Popular Science, neuroscientist and lead author of the paper Alex Keene provides some insight into their latest discovery: “There are all sorts of drugs to help induce sleep, or keep people awake. The interesting thing about cavefish is they appear to be healthy despite dramatic sleep loss. If we understand why, it might be possible to develop novel stimulants without the negative consequences that typically accrue with sleep loss.”

Be it at the library or in the club, we may very well see the development of a drug in the future that will keep you swimming all night long without any of the negative consequences to your health.