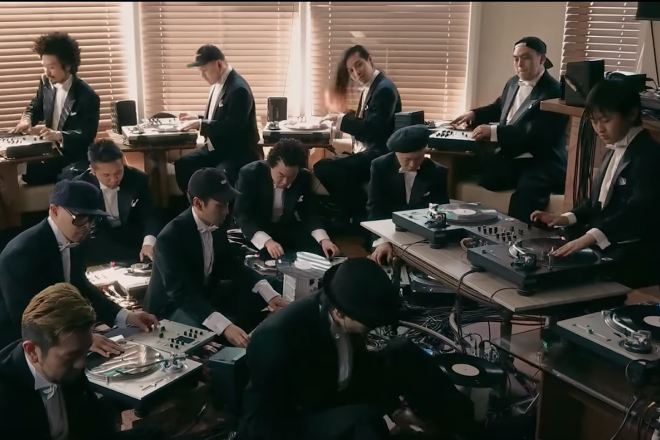 
Record Day in Japan celebrates the moment when LPs were first released in 1968, which Technics soon followed with the released of its SL-1200 turntable in 1972.

The orchestra consists of 30 turntablists, including an esteemed collection of DMC World Champions such as Qbert, Mr.Switch, Swamp, Kentaro, Izoh and Rena, as well as team champion members Yasa and Hi-C. Together they reconstruct classical music by playing vinyl records using a variety of DJ techniques.

Apparently, this is the world's first full orchestra composed only of turntables and mixers as instruments. Each member uses a Technics SL-1200 series turntable with a classical music vinyl. The DJs rebuild and mash up various classical sound sources by scratching, beat juggling, drumming and making use of sophisticated techniques and skills to create an original composition.

The DJs used eight specific records to create the new track including Vivaldi’s ‘Spring’ from ‘The Four Seasons Violin Concerto in E major’, Rossini’s ‘Girls of the Aged’ from ‘The 6th Album’ and the first 12” ever released, Nathan Milstein and the New York Philharmonic Orchestra’s version of ‘Mendelssohn Concerto in E minor’.

Watch the video to see The Philharmonic Turntable Orchestra in action as well as a short documentary about the project below.

Discover the fascinating story behind the evolution of the turntable here