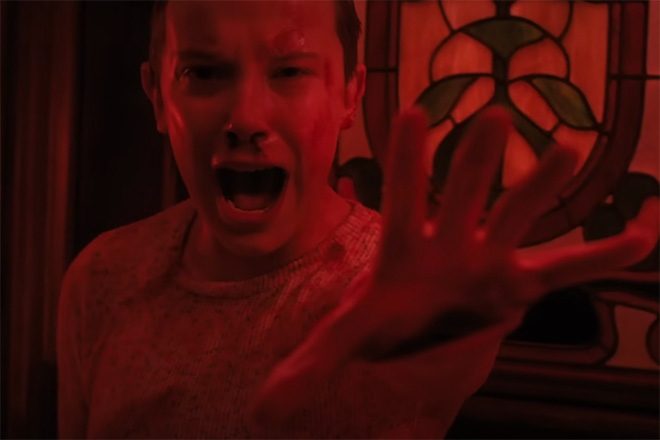 Netflix has just dropped a new Stranger Things trailer for volume two of season four which will air July 1.

The new sneak peek features a remix of Kate Bush's ‘Running Up That Hill’ alongside the iconic Kyle Dixon and Michael Stein Stranger Things theme tune.

Bush’s 1985-released single 'Running Up That Hill' is played throughout the latest volume and hsa now made it to Number 1 in the UK singles charts.

Read this next: Stranger Things' soundtrack really needs you to understand that it's 1985

Bush released an out-of-the-blue statement regarding the rise of her track via her website: "I’m overwhelmed by the scale of affection and support the song is receiving and it’s all happening really fast, as if it’s being driven along by a kind of elemental force."

“I have to admit I feel really moved by it all. Thank you so very much for making the song a No.1 in such an unexpected way.”

This morning, Bush spoke with BBC Radio 4's Woman's Hour and said that the news of topping the charts 37 years after the tracks release was "extraordinary", adding that "It's such a great series. I thought that the track would get some attention. But I just never imagined that it would be anything like this."

She continued: "It's so exciting. But it's quite shocking really, isn't it? I mean, the whole world's gone mad."

Bush has been a fan of the show since it first was released and spoke about how the character of Max has truly embraced her song by saying: "I think they've put it in a really special place.

"The Duffer brothers created the series and actually we watched it from the first series onwards, so I was already familiar with the series. And I thought, what a lovely way for the song to be used in such a positive way.

"You know, as a kind of talisman almost for Max. And yeah, I think it's very touching, actually."

The new action-packed trailer has shots of new villain Vecna, a very much still alive demogorgon as well as a mighty explosion.

Describing itself as an “epic season finale” we also see many dramatic shots including new character and Hellfire club leader, Eddie Mudson playing his guitar in what seems to be the over-side.

Previously a letter was published from brothers and producers of Stranger Things Matt and Ross Duffer to the show’s “nerds”.

Read this next: Here's all the tracks used in Stranger Things season 4

It stated: “With nine scripts, over eight hundred pages, almost two years of filming, thousands of visual effects shots, and a runtime nearly twice the length of any previous season, Stranger Things 4 was the most challenging season yet, but also the most rewarding one.”

They added: “So that's the good news. It's coming soon. And it's bigger than ever. It's also the beginning of the end. Seven years ago, we planned out the complete story arc for Stranger Things. At the time, we predicted the story would last four to five seasons.

"It proved too large to tell in four, but – as you’ll see for yourselves – we are now hurtling towards our finale. Season 4 will be the penultimate season; season 5 will be the last.”