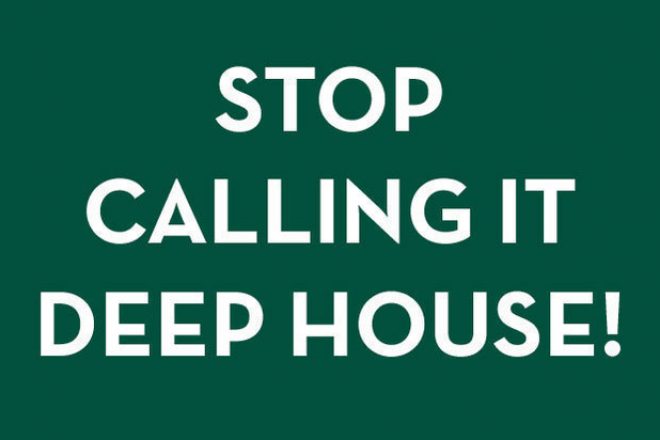 Without getting too pernickety, incorrect genre blanketing is a plague on plenty of new music. Whether it's a bass producer being lumped in with dubstep, a juke producer being categorised as future garage or Burial being heralded as the saviour of night bus, ill informed youngsters, out-of-touch music retailers and wannabe bloggers are bandying signifiers around with infuriating abandon.

Whether it's the result of a lack of historical perspective, laziness or bandwagon jumping does not matter, but it needs to stop. In the case of my beloved deep house, for instance, it's a genre not just defined by a slight sense of atmosphere, lazy jazz motifs, rounded edges or warm bass notes, it's about so much more. Or it should be.

House music was barely a scene by the time Larry Heard saw the genre's potential to be about more than just physical jack trax. As a multi-instrumentalist from a young age, he was one of the first to bring a real sense of musicianship to stripped down, machine-made disco.

By incorporating elements of the soul and jazz he grew up on, Heard unwittingly sophisticated and intellectualised the genre and, even though he probably didn't know at the time, deep house was born. The term was being used in the UK by 1988 and the Deep House Convention at Leicester Square's Empire in February of that year featured a number of seminal Chicago artists like Kym Mazelle, Marshall Jefferson and Frankie Knuckles.

If you add into the mix the gospel influences brought by vocalist Robert Owens when he worked with Heard as Fingers Inc in the 80s, you've a genre that not only sounds and feels warm, but that produced proper songs with painful and poignant lyrics. From there, the likes of Chez Damier, Ron Trent and Prescription Records perfected the deep house style we know today. It's deep musically, but so too emotionally, spiritually, sexually and, to some extent in the early days, religiously. It's deep house.

And it still is - or can be - but often not in the places we are told. And therein lies the problem. As a deep house bore I worry that anyone who fancies dipping their toe in might stumble on some lite, chart-topping house that's been described as 'deep' by some clueless US blog or misguided scene kid and be turned off forever. Just imagine that for a moment. Imagine a life without Chez and Ron's steamy 'Morning Factory' or Dream2Science or Moods Grooves or any of Theo Parrish's intoxicating voodoo sermons... Make it stop! These don't just deal in dope tracks, these make stirring symphonies that shoot straight to your heart.

Of course, deep house is just the start of it. Once you're down here there's a spaghetti network of variations on the theme to explore. It's true they range from terrific to tiring, nostalgic to nauseating, but as well as a spiritual and sexual depth, there's cosmic depth; music from the outer edges of our galaxy that's not so much deep as totally bottomless. Whether it's golden oldies like Abacus or modern mind melters Fred P and Aybee, allow your brain to get lost in their imagery and you'll really know deep. But probably don't do so when driving at night. Or when operating heavy machinery – It really is potent stuff.

If sci-fi ain't your thang, Hamburg crew Smallville excel in a much more earthy and human brand of deep house. Often coming under overcast skies, it's cuddly and romantic, candle lit and cosy-night-in. Take family member Moomin, with his curious daydream melodies, charming sample selection and loveable hip-hop slouch. Or boss Lawrence, with his molten ambient minimalism. And then there's subterranean and even subaquatic deep house. Vester Koza deals in the dusty, murky, spacious former and fellow Londoner Youandewan the rippling, echo drench latter, all married to inviting kick drum pulses that add to the sense of sultry seduction.

So, whether exploring the universe or the self, the known or the unknown, real deep house is something you feel in the blood in your veins rather than in the sweat down your face; it's a feeling not a physical reaction. There's a place in the world for the garage-influenced and direct house taking the world by storm, but please, stop calling it deep house. You are not only doing the genre itself a disservice (which could, ultimately, lead it to become a dirty word (see: dubstep, minimal, tech house) but in terms of the wider picture you are ill informing the next generation, misleading inquisitive ears and tarnishing the deep house canon in way that makes those most passionate about it angry to the point of self harm. Newcomers are welcome – deep house is not a closed off community only for the bearded and stuffy – but it is the reserve of music that speaks to your soul, not just your sole.

Along with the likes of Joe Smooth's 'Promised Land', Jungle Wonz's 'Time Marches On' and Jamie Principle's 'Your Love', this track was a proto deep house cut that laid down the early template that later generations went on to perfect.

Any Larry Heard will do, whether solo, as Mr Fingers, Fingers Inc or whatever: he goes deeeeeeep.

You'll find if you like this, the same Pépé's 'Path Of Most Resistance' will also get you steamy under the collar.

Raw, elongated and roughshod, STL makes shanty rhythms that take you to another world.