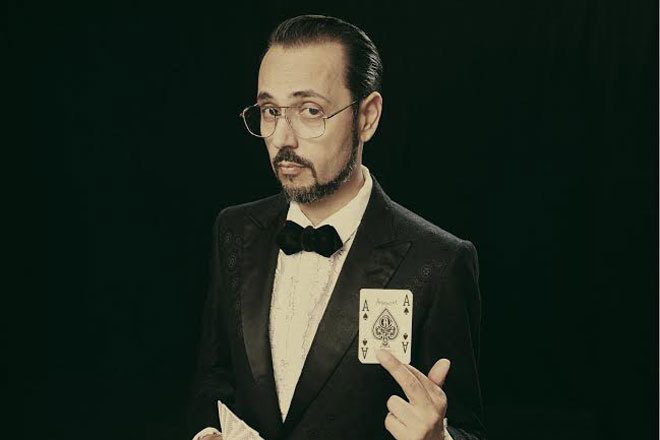 Selects is the playlist series on Apple Music where we ask our favourite DJs to delve into their record bags and curate a playlist that showcases the new ones rocking the dancefloors and the classics that always bang. This week, Dimitri From Paris steps up.

When it comes to disco, Dimitri From Paris is the one. He's an undisputed champion of the genre and his DJ sets, edits and productions are heralded as some of the best out there. He's quite literally, a master of his craft.

Suited and booted for every set and with a record collection that spans decades and decades, anytime you go and see him play, you're in for a disco-infused extravaganza.

That's not to say that's all your going to hear though, far from it. His house and old school garage collection is just as impressive and today we're here to present some of his favourite 90's selections.

He'll be playing at Soul Clap's upcoming residency at XOYO as part of their Day & Night Summer series, taking place every Saturday in June at the Shoreditch hotspot. So what better way to get in the mood for some dancing than with some of Dimitri's ultimate cuts? The day section of the event will roll out at The Magic Roundabout, just over the road from the club, and is the perfect spot for a boogie in the sun

Dimitri From Paris will play at XOYO on June 10, tickets here

The first House music records where charmingly raw and minimal, mostly because they were lacking the muiscianship and budget the Disco records they were trying to imitate had. Frankie Knuckles single handedly brought the lushness into House, by putting together a team of skilled musicians, singers, and engineers. He elevated the genre to a yet unparalled level of sophistication that seems to have gone with him. From his first album as an artist, It's Hard Sometimes has always been my favorite, downtempo yet unmistakably House.

The early sound of Masters At Work, that defined a lot of the second half the 90s.

As opposed to today when a large majority of Dance Music comes out of a laptop computer, those remixes where done in state of the art studios. The results where sonically astounding, and a lot of those creations have stood the test of time. This particular track features India on backing vocals, as well as Salsa legends Tito Puente and Eddie Palmieri

Urbanized feat. Silvano - Helpless (I Don't Know What To Do Without You) (The Kenlou Remix) 1992

Written by House music powerhouse duo Mood II Swing before they penned Free for Ultra Nate, this one hit wonder owes a lot to the Masters At Work beautiful re-orchestration. It was a time when people in clubs could loose themselves into very rich, and intense layers of vocals and chords, driven by what seems like the most intricate beats, if you compare them with today's standards.

Many have praised the Paradise Garage and his DJ Larry Levan which was in located in Manhattan. Across the Hudson river, in the not fancy suburb of Newark New Jersey, was a lesser known legend of a club: Zanzibar. The DJ there was Tony Humphries, and he had a rawer type of sound going on, tougher beats ,over RnB, gospel tinged vocals, with a disctincly lo-fi charm.

Embracing House music very early on, he helped define the New Jersey House from which legends like Blaze, and Kerri Chandler arose from Zanzibar patrons to producers. Here is Kerri producing one of his very early offerings.

Most of you will recognize the very disctinctinve vocal on this. She sounded like no one else back then, and no one has sounded like Bjork so far.

She hadn't gone solo yet, and the House world was discovering the quirkiest voice that ever graced its beats through this cheeky, and very musical remix of her band, The Sugarcubes from Tony Humphries.

This has New York, then budding DJ Roger Sanchez, feeding off the New Jersey House sound, and getting major label bucks to resurrect a forgotten song from British Soulstress Juliet Roberts. The result is an epic piano workout (courtesy of James Preston son of famed motown organist Billy) They used to call this Garage House (or Garidge in the UK) of its most achieved examples.

The Hamburg area in Germany was an unlikely spot for House music, but that's where Peppermint Jam a studio come record label was located, at it's helm Mousse T. Musician, Producer and DJ, with a very strong understanding of Soul, Funk and Disco Mousse T brought an eastern European twist to House music. Well written, and catchy songs, great choice of vocal performers, high production standards made it such that a lot of his creations crossed over from underground clubs to the mainstream. This This Cunnie Williams offers this unique combination

Towards the end of the 90's a lot of dance music producers where aknowledging Disco as the very roots of House. Marshall Jefferson, Masters At Work, and here Mousse T, went to the original musicians and got them to feature on their productions. On this one, Crusaders' vocalist Randy Crawford lays on a bed of beautiful string crafted by Salsoul Orchestra's main man: Vince Montana Jr.

Towards the end of the 80's House music became the mainstay of every underground British club. A few pop acts started to incorporate its sound into their poppier songs. The Pet Shop Fully embraced it, and had pretty much every House Music originator to remix their songs. I always was a fan of their approach, and distinctive song delivery and one of my favorite songs from them is Domino Dancing. While it came out in 1988 while House had crossed over to the pop airwaves it never received the House remix treatment. I couldn't get it to remix the original the way I wanted to hear it, so I got together with my partner DJ Rocca and remade it from scratch in that early 90's, deliciously cheesy, pop House flavor.