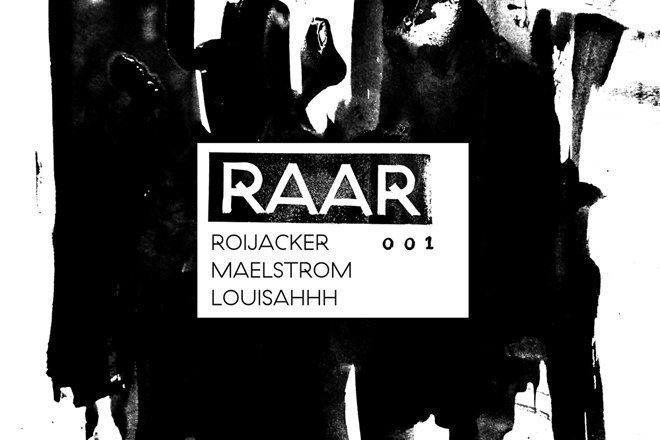 Respectively, Louisahhh!!! and Maelstrom are at boiling point.

Louisahhh!!! has been at the forefront of Bromance's worldwide takeover, fronting their label parties as both an excellent selector and burgeoning producer. Her recent 'Shadow Work' EP gained our electro EP of the month spot and it's some of her most accomplished work to date.

Maelstrom has been around for a little longer, establishing a name for himself with razor-sharp, electro-tinged cuts and mechanical, throbbing techno. He too has experienced success on Bromance but a hop across the French techno pond has seen him carve a name for himself on Zone, the label masterminded by The Hacker and Gesaffelstein.

Together however, the pair have found their sweet spot. Louisahhh!!! has previously described Maelstrom as her "shining light" and their deftly combination of slick, cutthroat productions and seductive, haunting vocal work has made them somewhat of an unstoppable force.

This is why RAAR is so exciting. The new record label helmed by the pair promises to deliver first-rate techno from a mix of both established artists and up-and-coming talent. Their first EP features more fiery tracks from the pair and also a brand new cut from one of the most outrageous techno groups we've seen in a while.

Roijacker is Dave Clarke, Black Asteroid and Mr Jones and together they've created a techno roller so demonic that you may need an exorcism after listening. Colossal kick drums, jagged riffs and zips that fizz in and out of the peripheries. We've got the premiere of 'Out Of The Lights' and you're going to dig it.

Check it out below and read what Louisahhh!!! & Maelstrom had to say about the new imprint.

Both of you have found success on Zone and Bromance, two forward-thinking electro/techno labels. Has this been the basis for RAAR or has it come from a more personal place?

RAAR feels like both a response and a reaction to the work we release (both independently and collaboratively) with Bromance and Zone. Clearly, neither of our careers would be where they are without these labels and we are proud to be part of such powerful and forward thinking imprints. We won't stop releasing work with these families, when appropriate. However, our mutual curiosities and creative ethos drew us to a place that were outside the realm and interest of existing labels, so we had to start our own. It has definitely come from a more personal place - it had to. If no one's gonna scratch the itch for you, you'd better do it yourself.

Can you explain a little more about the "punk-rock" ethos. Is it a statement of rebellion or an imprint that intends to unify?

The goal of RAAR is not so much external success but a place that is truly free to release boundary breaking, rule disapproving work - not being miscreants for the sake of it, but because it is necessary to serve the art and push it forward. This is punk rock. We describe ourselves as a benevolent anarchy not to be 'against' anything, but to do what we feel is both desirable and necessary, free from anyone else's standards or constructed hierarchies of what a record label 'should' be. There is no reason this attitude shouldn't unify, but it's certainly a conscious step away from any type of people-pleasing or commercially-minded release plan. Similarly, because we are entirely self-funded, there is definitely a very DIY-attitude to the whole thing; it is definitely a labor of love. We hope this comes across in the work.

How does it feel getting Roijacker on board for the first release. That must be a dream come true for a brand new techno label and long-time fans?

This is unreal for us. The triple-threat super group that is Roijacker (Dave Clarke, Mr. Jones, Black Asteroid) is really a perfect fit for the label, not only in their respective status' as musical heroes but especially in the fact that they keep pushing forward, they don't rest on their laurels. They are unafraid to try new things and keep it weird and brave, creatively. This is what RAAR is about, and we are super inspired and excited to be able to release this kind of record.

What does the next 12 months hold for the imprint?

We have a big year ahead! We look forward to releasing more music from both our heroes and also undiscovered newcomers (and of course, ourselves), and especially getting to throw parties that showcase these artists and our ethos, the RAAR attitude. We look forward to trying new things, maybe failing - but failing better. Get some people to have a new experience with music, get inspired and excited and hungry for more. It's already happening for us - the ball isn't just rolling. It's rolling down a hill. At a million miles an hour. On fire.