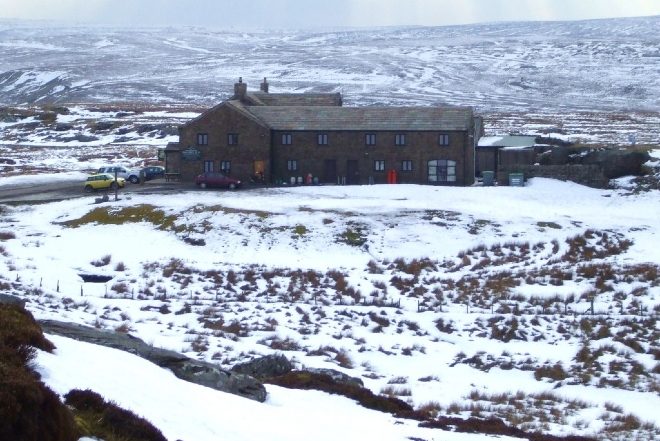 61 visitors, including members of Oasis tribute band Noasis, were stuck inside The Tan Hill Inn for the past three days due to heavy snowfall.

The majority of the 61 visitors who were snowed into the pub in the Yorkshire Dales, the UK's highest pub standing at 1732ft above sea level, have now made it out.

Read this next: Noel Gallagher: “I took an E and then electronic music made sense!"

This Yorkshire Dales pub got snowed in by the recent flurries caused by Storm Arwen, which resulted in customers who had travelled to the venue to watch an Oasis tribute band being unable to return home.

Read this next: Community spirit: how DIY culture is transforming Leeds’ music scene

While staff at the venue have said goodbye to the majority of the visitors today (November 30), two young girls who were "nervous about driving in these conditions” remained at the venue, according to Donna Harrowell, the inn’s duty manager.

Blizzards generated three-metre snowdrifts, requiring the construction of a tunnel from the front door, while the roads remained inaccessible over the weekend due to blown-over power lines.

Most of the guests who were stuck, including four dogs, slept on mattresses on the floor and sofas in the pub.

Read this next: Darlington pubs and venues to trial anti-cocaine spray to deter drug use

The group watched films on a projector, enjoyed the bar at the venue and watched acoustic performances by the tribute band snowed in with them.

The owners of the venue provided all meals for free, or at a low cost to subsidise expenses. They continued to charge as normal for drinks.

As news about the trapped attendees spread, people were quick to comment on the situation on Twitter.

Read this next: Nearly 90 million pints of beer wasted because of pubs being closed

On person said: "If someone isn’t already drafting a comedy based on the 60 drinkers forced into a 72 hour pub lock in with no electricity but an Oasis tribute band by snow in the Yorkshire Dales - provisionally entitled Snow-asis - then I’ll fear for the future of the British film industry"

Someone else tweeted: "I hope their bosses have read this story otherwise 'sorry I’m not able to come in, I’m stuck at the pub' is going to sound like the worst Monday morning excuse ever".

This is not the pub's first, or longest, snow in. In 2013, visitors were stranded at the pub for five days following a heavy snow blizzard.

Read this next: Brits need to drink 124 pints each to save UK pubs