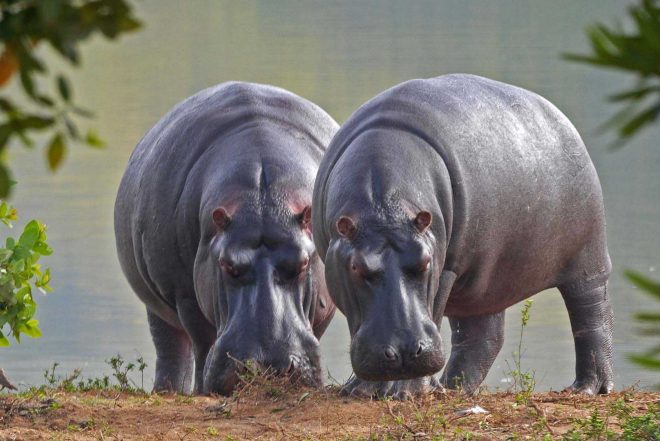 A herd of 80 hippos at the former home of Pablo Escobar are set to be sterilised due to being an invasive species.

The hippopotamuses once resided at the Colombian drug lord's private zoo, after being brought into the country nearly 30 years ago, and are thought to pose a threat to human safety.

Read this next: Legendary cocaine smuggler George Jung dies at 78


Dubbed the 'cocaine hippos', Colombian wildlife services said they had made the decision to sterilise due to the 80-strong herd having doubled in size in the past 10 years. Wildlife teams fear the hippos’ environmental impact could become a 'hazard' for both local wildlife and humans.

The hippos were left to their own devices at Escobar's former home, the Hacienda Naples, after his death due to the fact they were too big to transport and managed to successfully evade capture.

A study conducted by researchers across a number of Colombian and Mexican universities revealed that the hippos have bred so successfully that they had begun to spread across the country, becoming an "invasive species'"

The study also revealed that the hippos had spread from their original home of Medellín, almost 100 miles East of the city, and now roam around the Magdalena river basin.


The plan to neutralise the mammals and chemically castrate them in order to stop them from breeding and spreading further, came after the study revealed that they’re slowly becoming invasive.

Read this next: The 23 best films about cocaine

A biologist at Colombia’s National University, Enrique Zerda Ordóñez, said that sterilising the creatures wouldn’t be an easy task, but is the only option at this point. So far, 24 hippos have been chemically castrated.

As well as posing a threat to human safety, the hippos’ faeces is also said to have a negative effect on oxygen levels in bodies of water.