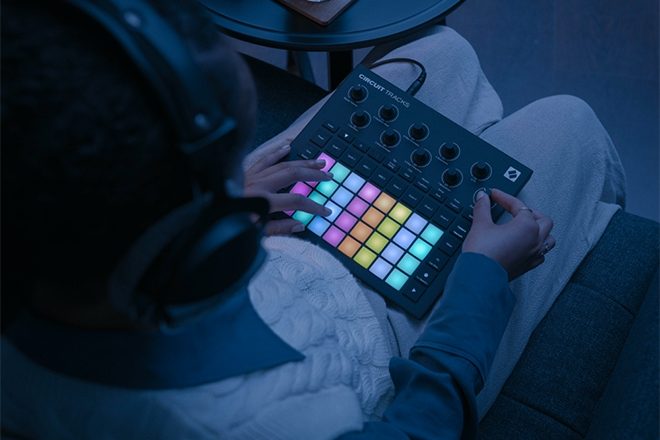 Circuit Tracks is equipped with two polyphonic synth engines, two MIDI tracks and four drum tracks, allowing your production to be as simple as possible.

In total there's 32 velocity-sensitive pads, able to be chained to create sequences up to 256 steps in length, and hundreds of artist-made presets.

Read this next: 5 of the best bass synths and modules

If you've got your own samples and patches, these can be loaded onto Circuit Tracks with a microSD card, while the five-pin MIDI in, out, and thru, and analogue sync out means you can link it up to your studio kit.

For those of you who work best on the move, there's a rechargeable battery that lasts for up to four hours, meaning you can make stuff in transit.

Circuit Tracks also works in conjunction with Novation's Components portal, allowing you to customise your device and giving you direct access to sound packs and more.

Read this next: The 10 best DJ mixers

Novation also recently teased Circuit Rhythm, which arrives in summer this year. This has features such as Grid FX and allows samples to be directly record into it.