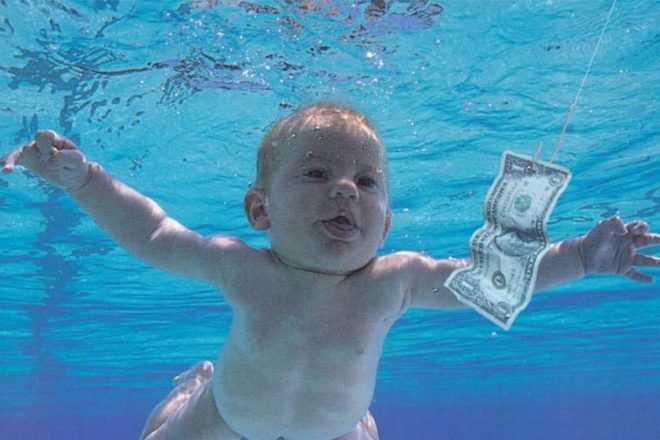 Spencer Elden, who featured on the album artwork for Nirvana’s ‘Nevermind’, is suing the band on the grounds of alleged sexual exploitation.

The renowned cover depicts Elden at four months old, reaching for a dollar bill on a fishing line whilst swimming nude in a pool.

Now 30, Elden has come forward to say that his parents did not sign a release authorising the use of his image on the 1991 record.

He has also alleged that the nude image constitutes child pornography.

The legal papers claim that "the images exposed Spencer's intimate body part and lasciviously displayed Spencer's genitals from the time he was an infant to the present day.”

They add that the band had promised to conceal Elden’s genitals with a sticker, yet they did not follow through.

Whilst non-sexualised images of infants are generally not considered child pornography under US law, Elden’s lawyer Robert Y. Lewis makes the case that the inclusion of a superimposed dollar bill makes the child appear "like a sex worker.”

Elden has shared the longterm impact the LP cover has had on his sense of self. It has been said that his “true identity and legal name are forever tied to the commercial sexual exploitation he experienced as a minor which has been distributed and sold worldwide from the time he was a baby to the present day.”

He also claims that he "has suffered and will continue to suffer lifelong damages" as a result of the artwork, from "extreme and permanent emotional distress" to "interference with his normal development and educational progress" and "medical and psychological treatment.”

He is now asking for damages of at least $150,000 (£109,000) from each of the 15 defendants. These include surviving members of Nirvana Dave Grohl and Krist Novoselic, the manager's of lead singer Kurt Cobain's estate, Cobain's former partner Courtney Love and photographer Kirk Weddle.

Read this next: We turned your favourite album covers into Nike sneakers

Representatives for the band and their record labels are yet to respond.

Across the years since ‘Nevermind’ was released, Elden has recreated the artwork on several occasions to coincide with the album’s anniversaries. Whilst still captured in a pool, he has always worn swimming trunks in these shots.

He has hitherto expressed mixed views towards the cover, which has been distributed across 30 million copies globally.