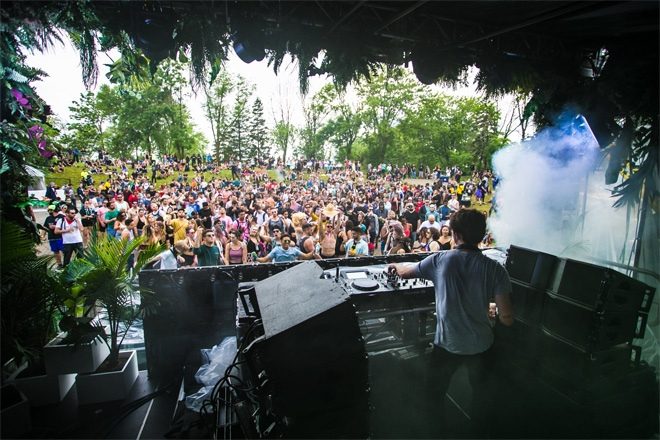 A 1500-person festival has taken place in the Netherlands to test whether a large-scale event can take place safely during the pandemic.

It was run by science research organisation Fieldlab as part of its Back To Live project which has backing from the Dutch government and nightlife industry.

Read this next: Dutch government plans to allow festivals from July

The festival was hosted on a site in the village of Biddinghuizen with attendees taking PCR tests 48 hours before the gates of the event opened. 150 rapid tests were also given out at random at the entrance, with 26 people testing positive and subsequently denied entry.

Attendees had to produce a negative PCR test, festival ticket and have their temparature taken to gain entry.

Read this next: A socially-distanced techno party has taken place in the Netherlands

Once inside, revellers wore motion trackers and downloaded a motion tracking app to trace their movements across the festival site and "contact moments" with other people. Face masks were mandatory but Vice reports they were swiftly removed by many in attendance.

Everyone who went to the festival in mid March was tested again five days after the event. Researchers will collate data on infection rates as well as how people move around a festival site and the ways they interact with each other.

Read this next: Tourists might be banned from Amsterdam's famous coffee shops

Andreas Voss, a professor of infection control who is involved with the project told DW: "All 1500 participants theoretically could have contact with each other. But what we see in other types of events is that it is usually a small group and they stay within that small group.

"Everybody has a PCR test, a coronavirus test, 48 hours upfront, and only with a negative result you can enter the festival. That is the main measure we have."

Read this next: Postponed Dutch festivals will not issue refunds until 2021

This is now the seventh event to be conducted Fieldlab as part of Back To Live, with other events taking place across theatres, nightclubs and other venues involved in the culture space.

Results so far have been encouraging, as Voss says: "Out of more than 6,000 people who attended these events so far, we only found five who might have been infected during or around the time of the events."

"It is too early to have the real results already, but the first results we see are quite positive."

Read this next: How coronavirus is affecting music