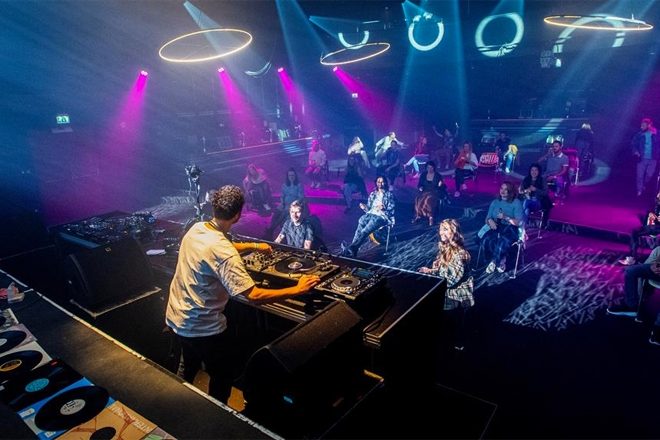 A seated, socially-distanced techno party has been held in the Netherlands.

Doornroosje, an 800-capacity venue in Nijmegen, allowed a small audience to enjoy an event called "Social D(ist)ancing. A 'clubnight'" during which 6 DJs played sets of 20 minutes.

30 people were allowed in for each set and were seated in chairs 1.5 metres apart. They were not allowed to mingle but footage from the party shows some members of the audience standing up and dancing on the spot.

The nightclub provided full sound and light production for the event, which took place last weekend.

One of the DJs, Mauke Rodermond, told Mixmag that "this event emphasised the ridiculousness of being obligated to stay seated during a dance event and therefore forms a statement from the (local) scene towards the current [lockdown] policy."

The Netherlands has relaxed lockdown restrictions but bars, clubs and restaurants are not allowed to open with more than 30 people inside.

As lockdown continues across Europe, people are coming up with inventive new ways to party, including car raves and police-sanctioned socially distanced raves.