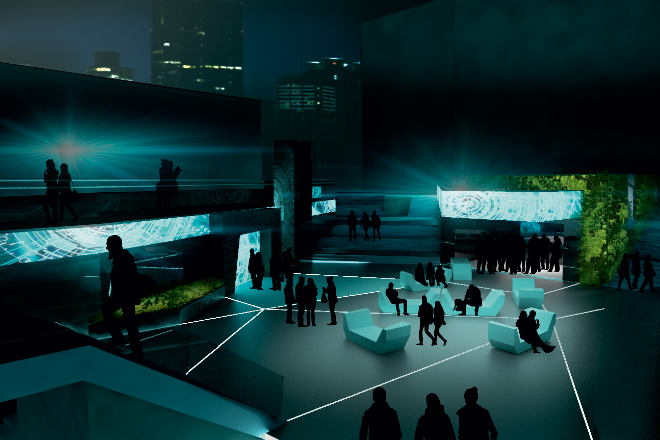 A new museum dedicated to electronic music will open in October.

Based in Frankfurt, the Museum Of Modern Electronic Music (MOMEM) will be the first of its kind -exploring the sounds, history and future associated with the history of electronic music.

Read this next: A new book is spotlighting 95 pioneering women of electronic music

Inside, visitors will be able to find exhibition rooms, performance areas and installations that bring together both architecture and sound. A library space will also offer a wealth of musical history, whilst instruments, turntables and software will allow guests to create music of their own.

On the exterior, the MOMEM building itself is thoughtfully matched to the museum’s contents: the design draws inspiration from 12” records, square sleeves and the metal mesh of soundsystems. Soundwave graphics wrap around the museum, whilst interactive areas allow passers-by to manipulate soundwaves through touchscreens.

To enhance the multi-sensory aspect of the museum, live gigs from local and international artists will be streamed on MOMEM’s facade, with viewers able to connect via Bluetooth.

The museum is under the charge of Director Alex Azary, who was inspired by his long-time friend, partner and Technoclub founder Andreas “Talla” Tomalla, who came up with the initial idea for the museum in 2011.

Plans for the concept were announced in 2015, whilst a pop-up version was launched in the city in 2018.

With his first-hand experience in electronic music history in mind, Azary is one of the leading cultural activists in his hometown of Frankfurt.