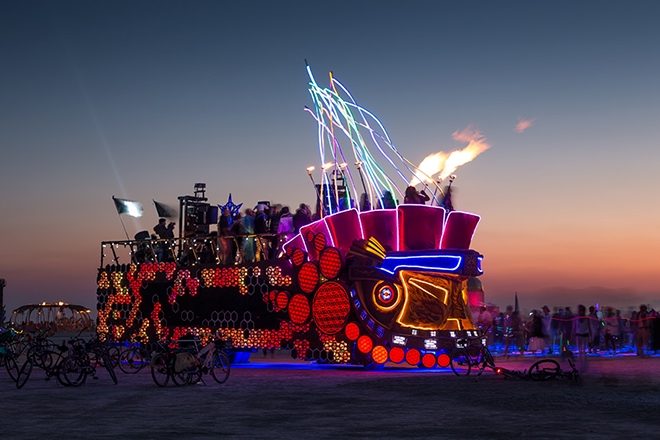 After making its impressive east coast debut in New York City at the Brooklyn Mirage back in June, the famous Mexican art car known as Mayan Warrior will set up shop at Grand Park in Downtown Los Angeles on August 4 for a massive showcase before making its way to Burning Man.

Presented by the first-rate nightlife organization Stranger Than and co-produced by Migration, the day through night event will be soundtracked by the crew's favorite as yet to be announced special guests. All proceeds for the event will go towards funding the art car’s journey from Mexico City to Burning Man this August.

First debuting at Burning Man in 2011, Mayan Warrior has been a fixture at the world-renowned gathering. The unique design is inspired by Mayan and Huichol art with a touch of modern tech and is a product of a new generation of Mexican artists led by founder Pablo Gonzalez Vargas. The crew involved in the project include a collective of artists, craftsmen, photographers, designers, technologists and architects from Mexico City and Northern California.

With the mission of presenting contemporary Mexican electronic music to the world, Mayan Warrior has established a reputation for putting together a wild visual and auditory experience that pays homage to Mexico's deep and ancient culture. Musicians like Concret, Dramian, Mandrake and Rebolledo have helped to establish its prestige for consistently delivering this mystical experience.

Mixmag had the pleasure of partnering up with The Brooklyn Mirage during Mayan Warrior's wild New York City debut to present a live-stream of the Pachanga Boys' dynamic performance aboard the art car.