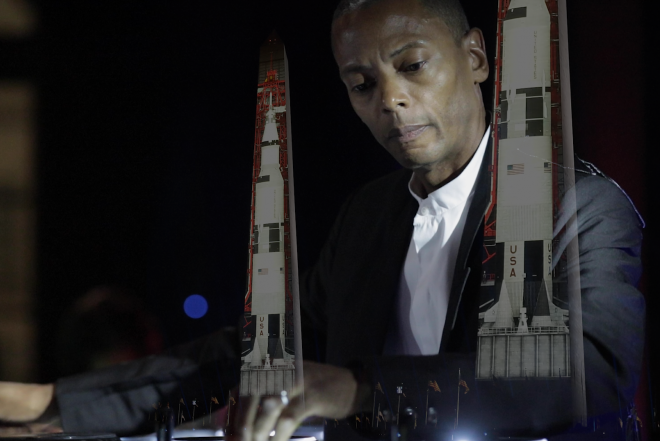 Earlier this year in Washington DC, the Smithsonian celebrated the 50th anniversary of NASA's Apollo missions to the Moon with The Apollo 50 Festival. At a special afterparty for the event, Detroit techno pioneer and innovator Jeff Mills performed a special live set, and Mixmag was there to capture it.

Coinciding with the unveiling of this unique live set is the release of Jeff Mills' 'Sight, Sound and Space' compilation. This next installment in his 'The Director’s Cut' series sees the Detroit icon dive deep into his own catalogue to hand pick tracks that epitomize his feelings on sight, sound and space. Now his deep-seated thoughts about these concepts will be sonically explained through this massive compilation.

'Sight, Sound and Space' will be released on October 4 via Jeff Mills' own Axis label. Purchase here

CD 1: Sight - A compilation of selected tracks that refer to compositions created for films, moving images or inspired watching something.

CD 2: Sound - A compilation of selected tracks that have a unique and specific type of sound to them.

Booket: And - This epic compilation contains a large booklet of 50 pages in which Jeff Mills wrote his own commentaries and stories behind each tracks he carefully selected.

CD 3: Space - A compilation of selected tracks that are related to Outer or Inner Space, Space Travel and or any celestial body or life form or entity.