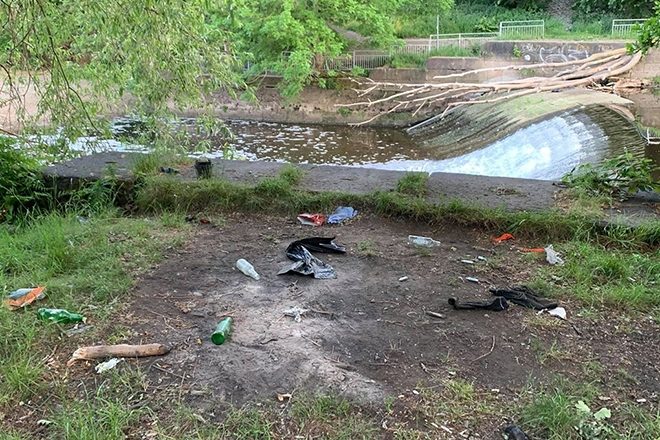 An illegal rave at the Kirkstall Valley Nature Reserve in Leeds attracted around 200 attendees on Monday night.

Three arrests have been made and sound equipment has been seized after the West Yorkshire Police shut down the lockdown-breaking party.

Revellers waded through the RIver Aire to access the island site.

Superintendent Chris Bowen said: "We would urge people to consider their own safety and the safety of others, particularly during the warmer weather and the ongoing period of lockdown.

“We will continue to work alongside our partners to engage, explain and encourage in a way that will influence people’s behaviours, using enforcement only in the circumstances that we have to.”

Read this next: How illegal rave crews are using custom apps to .avoid the police

Photos of the aftermath posted online show the remains of fires on the riverbank and litter left strewn over the land, where birds have been nesting. The body of a young magpie was also found near the edge of the dance area.

Alongside that Facebook post, a spokesperson for Urban Wildlife Leeds wrote: "Well the fine youth of Leeds ONCE AGAIN show NO RESPECT for wildlife in bird breeding season never mind lock down.

"Not content with the damage they caused at the last one in 2018 burning down meadows full of moths and butterflies and causing disturbance to waterfowl wildlife.

Local resident Paegan Ward told Leeds Live: "It's really beautiful down here, but it's been ruined.

“I'm really angry. I totally understand that people want to have a good time, but it's not just the rave and the mess that's made me angry. "We're in lockdown and it's just so disrespectful. It's a slap in the face to everyone who is doing their best to try and be sensible.”