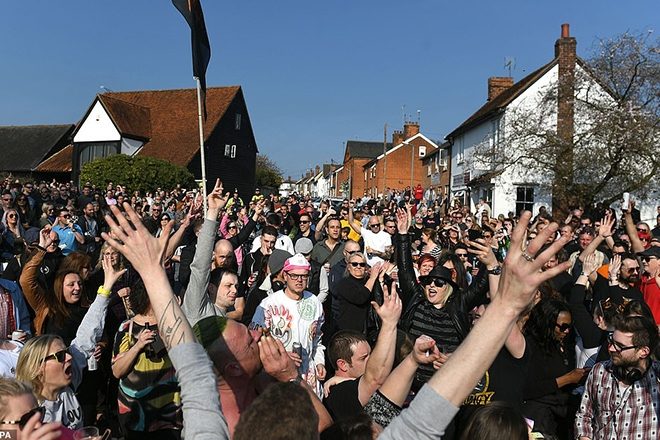 Hundreds people from all over the world and different walks of life took the day off of work today to travel to Braintree, Essex, and attend the funeral of The Prodigy's late frontman, Keith Flint.

Keith was found dead at his home in Dunmow, Essex, on the morning of March 4 from an apparent suicide. He was 49 years old.

Legions of fans packed the standing room only train to Braintree - cracking open cans of lagers with mohawks standing tall and sporting a range of Prodigy clothing and merchandise from over the years.

As Keith's casket was escorted down the streets of his hometown, the mood swung from wild raving to moments of respectful and somber silence - celebrating and honoring the original firestarter and all the high-octane energy he provided us with. Packed with motorbikes, memorabilia, soundsystems and ravers taking over the streets, it was a farewell Keith would be proud of.

Mixmag was on site to pay homage to Flint's life with the rest of his dedicated fans. Check out our live blog of the funeral here.

People raving on the streets of Braintree in celebration of Keith Flint pic.twitter.com/c4RIqc7wZ3

Huge crowds assembling outside the church to commemorate the incredible life of Keith Flint pic.twitter.com/JMOlcEf5IN

"We love you Keith. Live forever."