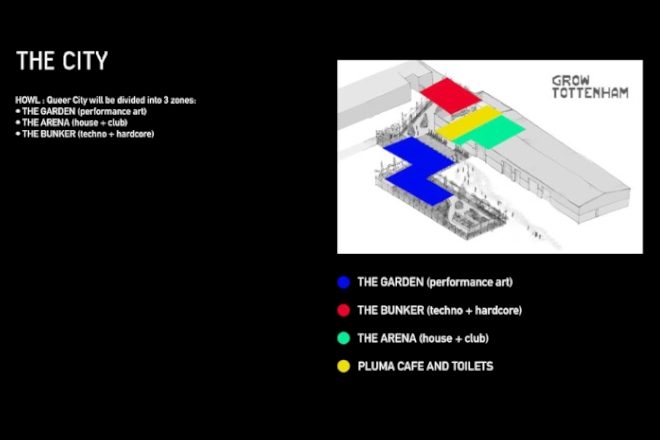 Today, HOWL are throwing their first party at Grow Tottenham, transforming the North London site into a "queer city" for 14 hours to "bring unity and solidarity during these fractious times."

The HOWL team, which comprises of Samuel Douek, Zoë Marden, Nicco Torelli & Fiontan Moran, explain, “We aim to launch an incredible queer festival that brings together performance art, house and techno under one roof for one event, transforming Grow Tottenham in to a sprawling metropolis of queerness”

Famous queer techno collectives HTBX, KAOS, OPULENCE will come together in support of the new format for the first alongside independent acts such as Otamere, Tanake, Fuego, Shay Shay, Pierre & Baby, Awkward N’dure and Bimini.

The 'day to night safe-space' will take place in three zones: the Garden, the Bunker and the Arena.

The Garden will be hosted by CAMPerVAN, a travelling LGBTQ+ performance art and community event space. It will showcase a variety of queer performance from live music and stand-up comedy to drag and dance; between 4 - 8pm, there will be six slots for individual performers, groups or several shorter acts.

The Bunker will showcase techno and hardcore, while the Arena will lean more into house and club sounds.

Grab your tickets here. You can buy discount tickets if you have the Feeld app (which must be shown upon entry) - proceeds will go towards donating funds for HOWL's independent queer performance artists and DJs.