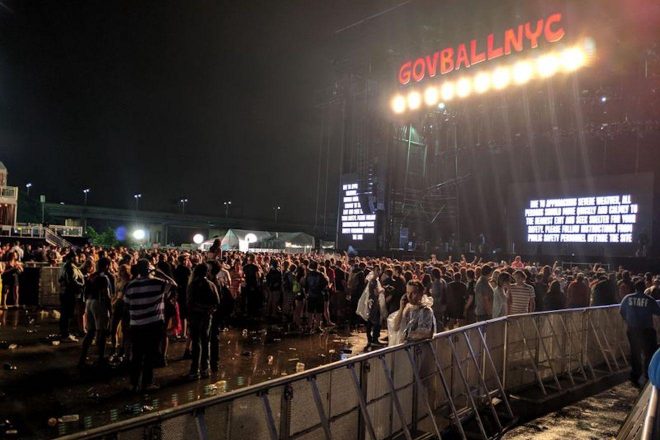 Inclement weather is a recurrent issue for New York City’s Governors Ball. Just as in 2016, this year’s event suffered thunderstorms on its final day, threatening the safety of attendees and event staff.

Yesterday’s patrons were held at the gates until around 6:30 p.m. due to severe weather warnings, before being allowed entry. Then at 9:35 p.m., just a couple hours after finally opening the gates, the event issued an emergency evacuation due to impending thunderstorms and flash floods. The remaining sets for the day, including The Strokes, SZA, Charli XCX, Soccer Mommy and SOB X RBE were all cancelled.

While being evacuated, large groups of attendees chanted “REFUND!” in unison, as they milled toward the exits. Others destroyed art installations with visible frustration and malice, with spectators exclaiming "FYRE FESTIVAL!" as they witnessed the scene.

One festival attendee, Trey Taylor, recalls the events vividly. “Nas played a great set, and when he ended the sky was clear and people were in good spirits,” said Taylor. “But then someone came on the mic and a message flashed on screen. He said, ‘This is a safety announcement. Everyone please make your way to the exit. Due to approaching weather storms…’ or something silly like that. He didn’t say the festival was over, or that we’d get a refund. Just that we needed to make our way to the exit.”

Tens of thousands of festival-goers were then trapped on Randall’s Island, awaiting either a ferry-ride back to Manhattan or a coveted seat on one of the MTA busses. Due to the thunderstorm, the ferry system was temporarily landlocked to wait out the storm. The scene quickly made a turn toward the cataclysmic, with patrons trapped under bus stops, while others tore down fences to escape the rain and find shelter.

“On the way out everyone was saying ‘Fuck you Gov Ball!’ to all the staff. One person came all the way from Madrid to see The Strokes and was so bummed. As soon as everyone got outside of the gates, the weather turned and the heavens opened up,” Taylor recalls with an exhausted grin. “It was pretty insane, we were trapped at a bus stop just watching MTA busses drive by because they were completely packed. I understand the reasoning for them cancelling the day, but their evacuation plan was virtually nonexistent.”

View more photos, videos and reactions from patrons during the fiasco below.

So Governors Ball ended the way ‘Jurassic Park’ began. Real solid emergency evacuation plan there, @GovBallNYC. We could all tell how important our safety really was. 🙄#Govball2019 #GovBall #GovBallNYC pic.twitter.com/UMcAkgpaeg

My fav performance of gov ball is the crowd of ppl who knocked down this giant fence so we could get the fuck off this island pic.twitter.com/XeqaUx0ruH

As someone who has supervised an event staff/fireguards of hundreds in the past I can say that gov ball’s evac plan tonight was a shitshow. Shrugging off attendees with questions and giving out conflicting information is really not cool.