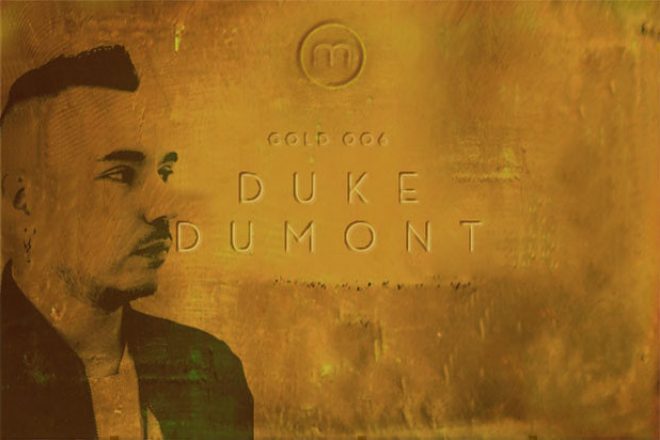 Mixmag Gold is a series dedicated to the DJs and producers who we think are making the strongest waves within dance music right now. Next up is London producer Duke Dumont, who surged to the top of the UK charts last year with the infectious 'Need U (100%)' and is currently riding high with brand new single 'I Got U'

Even though Duke Dumont had been a well-known name among the underground community since 2006, it wasn't until 2012 that a mainstream dance audience became familiar with him.

First gaining radio play that year with 'The Giver', which was released via Tiga's Turbo Recordings, the Londoner's big break then arrived in 2013 with the release of 'Need U (100%)' on his Blasé Boys Club imprint. Moving away from his previous, dubbier work, the track saw him adopt a catchier, song-based approach and his newfound pop/house crossover has become a firm favourite of the likes of Pete Tong and Annie Mac. 'Need U (100%)' ended up at number one in the UK singles chart.

But that success didn't come without any stumbling blocks. Following the release of his 'Regality' and 'The Dominion Dubs' EPs in 2007 and 2008 respectively and a host of remixes for the likes of Lily Allen and Bat For Lashes, the producer was ready to stop making music full-time when hit with a realisation that he wasn't making any real progress and it might not be a career that could pay the bills.

Six years later, Adam Dyment has toured North America and Australia, has a UK number one and Grammy nomination to his name and new single, 'I Got U' is slated to become his second chart-topper in less than a year.

As he applies the finishing touches to his forthcoming debut album, we chat to him about his newfound superstar DJ and producer status, how he's adjusted to life since 'Need U', dance music snobbery and DJs moaning about touring...

You're currently working on an album. How is that coming along?

It's starting to take form, I'm just adding the finishing touches to things. I'm about 60 to 65 per cent through it. Release wise, it's going to be this year via Blasé Boys Club through Virgin EMI and Astralwerks in America. It could be the summer, it could be early autumn. We'll just see what the label is saying and take it from there. It's getting there slowly but surely and I'm happy with the way things are sounding.

Is there a concept behind the album? Will it be similar to 'Need U (100%)' or see you veering towards your older, more club-based tracks too?

It's going to have a dynamic, without a shadow of a doubt. I had success on the back of 'Need U' in the charts and the momentum I picked up was incredible. I'm now in a whole different area off the back of that. Essentially though, I'm always going to do my club music and make music that I'm going to DJ. There is a slightly different approach to music in the Top 40 so I've now got one foot in that world and one foot in the club world which is where I learnt my craft. Saying all that, everything is merging into one now and the distinction between the two is getting very, very thin. Just look at Route 94 being number one last week. My goal is to make the best song possible in whatever context that might be.

How much has the success of 'Need U' changed your life?

Completely; it's given me security. For a couple years, around 2009 or 2010, it was tough. I gave myself a year to have a good year, otherwise I'd be back to doing a 9-to-5 in an office or something because I had no money. It was around then that I did a couple of club EPs on Turbo Recordings with the most successful song on those being 'The Giver'. Then 'Need U' came about and I was like, "OK, for the first time in my life I might be able to buy a house." It was a mixture of working my arse off and a bit of good fortune. I'm just so grateful for that track for many reasons.

What are the perks of your newfound superstar status?

Number one, I don't actually think I'm a superstar! Number two, if I can get security by doing what I love, I can't ask for much more. Most DJs moan about travelling but I love it. If I've got no deadlines and I'm travelling, I have the time of my life. I'm going to cities that I'd never think about going to and I'm getting paid for it, it's fucking great. When people are like, "Oh, I'm tired", shut the fuck up, you're getting paid to travel and to DJ.

How have you adjusted to the increase in touring in the last year?

I think I did about 120 shows last year and we're talking from the West Coast of America to the East Coast of Australia. It was quite hard but it was definitely a learning curve. I know the best kind of way to tour now. If you're doing a 20-date tour of America, don't get completely drunk in the first week! I've done that and the weeks that follow get a little harder.

You started out releasing heavier, techno-leaning tracks. What initiated the change in your style with the 'For Club Play Only' EP series?

It wasn't a conscious decision at all but I think that the more musical side of club music was starting to creep in. With more musical-based stuff, it tends to have a bit more shelf life as opposed to zeitgeist beat music. It's tough to make a song that's relevant about a year down the line. I think I'm going to make more conscious decisions to make dance music that has a bit more shelf life and connects a bit more than an instrumental track.

Did you produce 'Need U' with the intention of it breaking into the charts?

I did an instrumental for 'Need U' as part of the 'For Club Play Only' series and it just seemed to stick in my head a little bit with its distinctive qualities. I reached out to A*M*E just to see if we could make it into a song that could possibly cross over by structuring it around a verse and chorus. It was complete virgin territory and I was slightly apprehensive but she did the vocal and it was probably one of the best vocals she'd ever done. With Hot Natured breaking into the UK Top 40 around the same time with 'Benediction', it was like, "Wow, it's possible".

How do you think the dance music landscape will progress this year?

It's not about genres for me, it's about how good an artist is. Disclosure are really fucking good at making music and then there's Tessela who does stuff for R&S Records. He makes almost rave-like music in a similar vibe to Zomby a few years ago and it's fucking amazing. What I'm saying is that it's not genre specific, they're just really good artists. I try not to think of it that much because it starts to mutate a little bit and you start to lose your love of the music.

What are your views on people turning their nose up at certain artists once they've experienced mainstream success?

I used to make this mistake; I used to think I could do what everyone in the Top 40 does. You know what, it's fucking hard! It's not that easy to make a song that can sound good in a club, on the radio, on an iPhone and on laptop speakers through YouTube. I think people just need to have a little more respect rather than thinking artists aren't cool anymore for getting popular.

Do you think your fans would react negatively if you went back to making less mainstream, more underground-leaning tracks?

I really don't know to be honest but what commercial success does give you is a bit of freedom. If you want to continue writing music that could cross over into the mainstream, it gives you freedom to do that as long as you're good enough. People think what they think but if I'm happy with the music at a certain level then I only answer to myself. At the same time, I'm also grateful to the people that buy the records. 'Need U' ended up selling over 400,000 records. Apparently 1 in 100 people in the UK bought that record and that's just fucking mind-blowing.

Deadmau5 has recently said that EDM in America "all sounds the same". Do you think there is a chance of that happening with the house music crossover in the UK?

Of course there's a risk of that happening but it all comes down to the artist. If an artist is actively copying someone to try and reach commercial success then I don't think that's the pure form of how things should be done. People need to give a bit more credit for house music coming through as it's coming from a good place most of the time. Most of the people involved, whether it's Route 94, Disclosure or myself, come from a good place. House music is picking up momentum in the charts at the moment because people are going out again, hearing the music and buying the records. I DJ'd throughout the recession and it was grim.

We recently ran an article on snobbery in dance music. Have you noticed a difference in the scene since you began DJing?

On a personal level, it's got better. I used to DJ for really dodgy promoters. I remember back in 2008 before everything picked up, a promoter came up to me and refused to pay me while I was DJing. With regards to the crowds getting worse, it's the most disgusting thing I've heard. I've heard this whole anti-shuffling thing bandied around and it's like a classist divide. Who the fuck is anyone to say, "You can't appreciate this type of music"? The one thing I love about DJing now is the female to male ratio. When I first started out it used to be 80 to 90 per cent guys and the climate in the clubs used to be more sinister; you could feel an air of aggression in some of the venues. A lot of the places I play now could be 50:50 and sometimes it's 60:40 female. The only time I've ever experienced a climate like that was when I used to play at gay clubs in East London.

'I Got U' has just been released and it's being backed for number one. How do you feel about people backing you for your second number one spot?

There's no beating around the bush, it would be nice if that happened again. But I can only take responsibility for one thing and that's making the best kind of music that I can possibly make. It's really nice that it's picked up momentum and looks like it's going to have commercial success. Even if it doesn't but I'm happy with the song, that's enough for me. In the history of music, how many people have made music and gone to number one? Number one, two or 41, it's all good.

'I Got U' feat Jax Jones is out now on Blasé Boys Club. Get it here