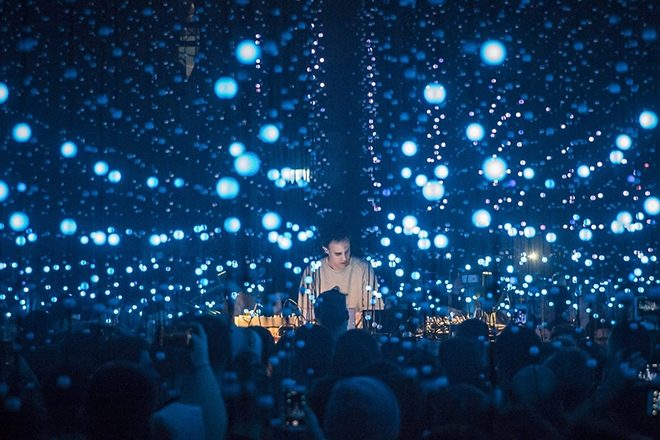 Four Tet has announced that his remarkable live show will return in 2019.

The initial announcement was made via Twitter, in which Four Tet wrote, "doing this again in 2019. Details coming soon."

Ever the innovator, the live show Four Tet created to support of his last album, 'New Energy', was seen as nothing short of game-changing. Back in February of this year, we went as far to say it's one of the best live shows, if not the best live show we've ever seen.

Stationing himself in the middle of the floor and covering each venue he traveled to head-to-toe in dazzling lights, the audience finds itself immersed in a magical light show that is all the while scored by one of electronic music's most treasured minds. The team responsible for the lighting is Squidsoup, a UK-based, international collective of artists who create unique, dynamic installations around the world.

Ticket to Four Tet's mesmerizing and serene live show sold out around the world while he was touring with the ambitious and genius installation this past year. This week, Four Tet revealed that his first live show of 2019 is set to take place at Alexandra Palace in North London on May 9.

Due to "unprecedented demand" as Four Tet put it earlier today via Twitter, a second show at Alexandra Palace has been added for May 9.

Tickets for both shows are available here.

It remains unclear whether this live showcase will be a one-time thing or whether Four Tet will continue to take the light instilation on the road.