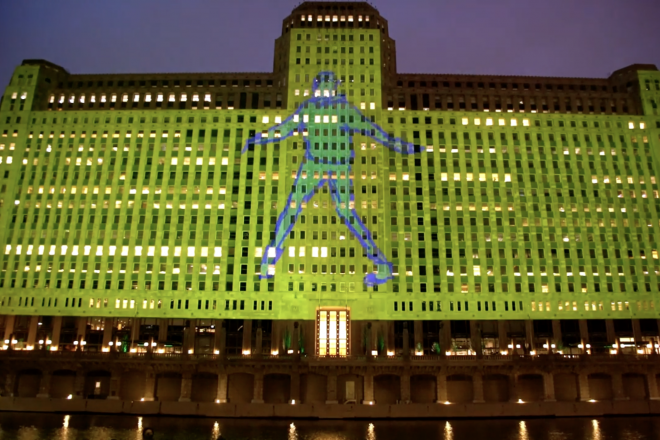 Footnotes, a film that tells the story of footwork and its early beginnings, is being projected onto Downtown Chicago’s Merchandise Mart every night until September.

From July 13 until September 16, the animated short film will screen from 9:PM in the middle of Chicago’s famous downtown, a city that helped to bring forward the seminal genre.

Screened as part of the Year Of Chicago Music project, the film documents the genre which came to a head in the 90s, taking influence from its jungle and drum ’n’ bass predecessors. At a speedy 160bpm, the new genre fuelled a wave of exciting new music across its parent city.

Projected onto the enormous 2.5-acre span of Merchandise Mart, this initiative comes from the Department Of Cultural And Special Events, who collaborated with Art On theMART to bring the project to life.

Announcing the project on Instagram, Art On theMART gave news of the festival launch night on July 6, where attendees could join for more activities:

“A DJ and live dancing, followed by remarks from Art on theMART Executive Director Cynthia Noble, DCASE Commissioner Mark Kelly, and artists featured in 'The Year of Chicago Music' series will begin at 8:PM,” they posted.

Litebulb - producer of Footnotes and part of the Era Footwork Crew - told The New York Times “It’s about damn time,” after news of the new project. “Footwork has been part of Chicago for 30 years,” he added.

The film predominantly focuses on footwork dancers who helped to bring the genre forward and includes music from DJ Spinn, the Chicago Buckey Boys, and Angel Bat Dawid.

Footnotes was directed by Wills Glasspiegel in collaboration with footwork dancer and animator Brandon Calhoun. Catch the film every night from 9:PM until 9:30:PM by Chicago Riverwalk on Merchandise Mart.