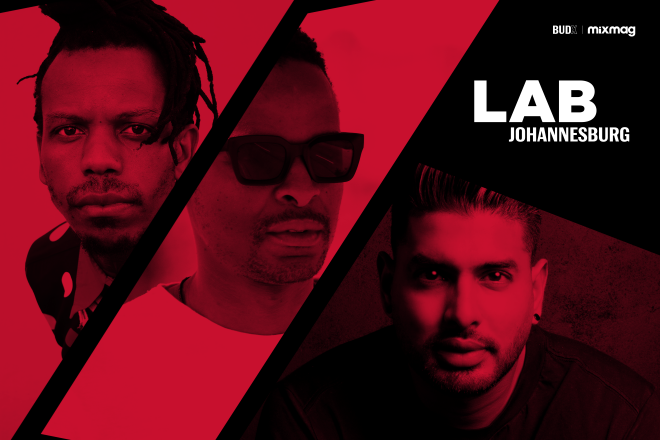 Mixmag and BUDX are proud to partner to bring you the newest destination of the Lab this summer: The Lab Johannesburg.

South African DJ Floyd Lavine is known for his African soul and rhythm influenced house sets, having a heavy presence in Berlin and Cape Town. Lavine is one of the creators of RISE, a Berlin-based record label throwing African-inspired events. RISE throws monthly events at Berlin’s Watergate club and other venues across Europe and Africa with headliners such as Black Coffee, Osunlade, Henrick Schwarz and Culoe De Song. Lavine’s unique afro house tracks have been released on Get Physical Records, Watergate Records, Upon.you Records and RISE music. He has performed at Glastonbury Festival UK, Berghain, Paris's Djoon, Rocking the Daisies in Cape Town and Oppiekoppie Festival.

With his home base in Gauteng, South Africa, Kyle Cassim has risen in popularity. Dropping his law degree to DJ full time, he has performed his vocal and uplifting house sets alongside well-known artists Franky Rizardo, Skitzofrenix and Jeff Doubleu. He has performed at Rage, Wonderland, H2O and many more festivals. Recently, he began a weekly Friday night show called “The Kyle Cassim Show” to share his “dirty, filthy, stanky house music” on the national radio station, 5FM.

Veteran, forward-thinking South African DJ and producer, Aero Manyelo reigns from Ivory Park in Johannesburg. His tracks such as “Mexican Girl” and “Mooki,” as well as his groovy, percussive sets have been supported by Diplo, Damian Lazarus, Dixon, and Oskido. He recently compiled and mixed the compilation “Body Language” including a remix from LA-based producer, Eagles & Butterflies. Manyelo has performed sets for both Boiler Room and Cape Town Electronic Music Festival (CTEMF).

For a chance to attend The Lab - Johannesburg on September 25, RSVP here.

Mixmag and BUDX present: Lab Johannesburg
5 rising South African talents you should know
Cover star selects: The sound of South African house
Why South Africa is one of the most exciting destinations for electronic music today
An essential city guide to Johannesburg
Get the best of Mixmag direct to your Facebook DMs