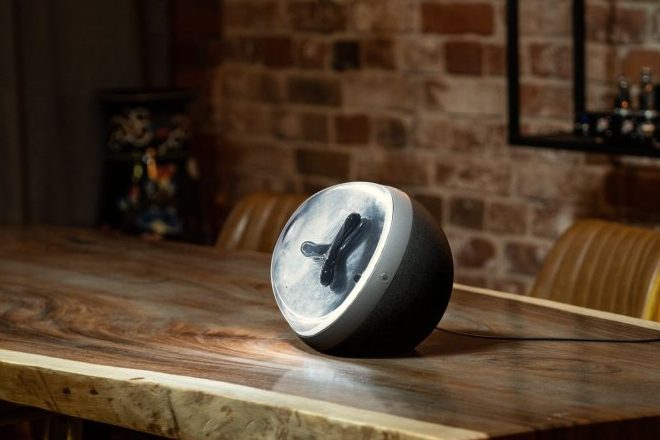 A revolutionary ferrofluid speaker that allows you to visualise your music is now available on Kickstarter.

The Van Der Waals speaker was designed by Sergey Kuznetsov, the inventor of the Claustrophobia escape room series.

Read this next: The 11 best Bluetooth and portable speakers

It includes a 9-inch visualiser with ferrofluid, a particular form of liquid with microscopic magnetic particles floating about inside.

This creates an alien-looking black blob will react to the device's electromagnetic field and dance about in tune with the music being played.

It was originally designed by NASA and used in rocket ships to regulate fuel in zero gravity situations.

Read this next: Sonos One is the "smart" speaker that plays music when you shout at it

The dancing black blob created by each user is unique.

Thanks to a high-quality design that includes the newest audio technology, the speaker generates crisp, clear sound. The sound quality is excellent due to the four speakers, which include two tweeters and two mid-bass speakers.

SBC, AAC, aptX, aptX HD, and aptX Adaptive are all supported by Van der Waals, which connects through Bluetooth 5.1. It comes with a USB-C cord and may be used on its own or in a multi-speaker system.

Read this next: Bluetooth Speakers: The weird, the wonderful and the wireless

Users can now also customise the speaker's turn-on sound fluid pattern, and a microphone will be included after some of the stretch goals are met. This means that the ferrofluid will be able to respond to noises in the environment.

In addition to black, the speaker will be available in white.

The features that come with the Van Der Waals speaker illustrate that it is not simply an expensive visualiser, with costs starting at $349 for the lowest tier bundle.

The name is a tribute to Nobel Laureate and Dutch physicist Johannes Diderik van der Waals, whose work centred on molecular physics.

Kickstarter is an organisation which "make ideas into a reality", they say on their website that it is where "creators share new visions for creative work with the communities that will come together to fund them".

Watch the video below which shows the speaker being tested in a music studio with various sounds.

Learn more about the Kickstarter product on their website here.