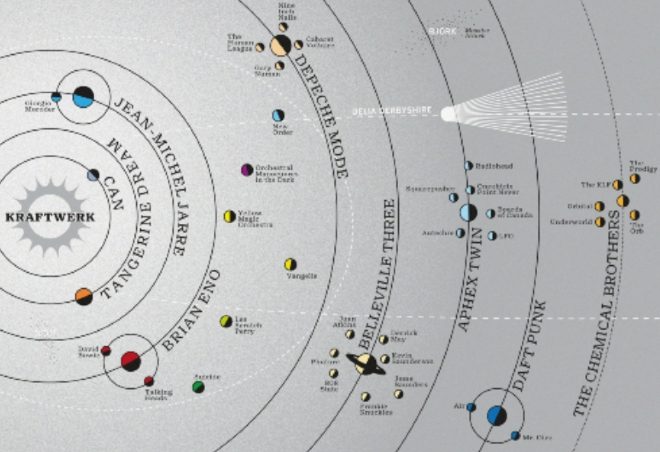 A creative studio in the UK has created a unique interpretation of modern electronic music's origins.

"The Electronic Solar System" and "The Alternative System," two art prints by Dorothy, a Manchester-based studio, reinterpret monuments of our solar system as key individuals in the history of electronic and alternative music respectively.

In the description, the company says: "Just like the planets orbit the sun and the moons orbit the planets, our new Electronic Solar System print maps out the massive pull and influence that bands like Kraftwerk, Brian Eno, Depeche Mode, Aphex Twin and Daft Punk have had on each other and the bands around them".

Influential performers such as Daft Punk and ambient music pioneer Brian Eno are included in the electronic music-focused edition.

The art's structure not only shows the genre's most influential contributors, but also the inspirations that likely influenced each artist.

Read this next: 10 iconic The Chemical Brothers moments

Iconic German electronic band Kraftwerk are, of course, firmly positioned in the centre of the universe - the sun. The group would go on to influence other musicians and be one of the genre's greatest success stories after debuting in 1969.

The Prodigy and Underworld appear alongside The Chemical Brothers, while Radiohead and Squarepusher emerge under the pull of the Aphex Twin planet.

Read this next: The best Prodigy tracks ranked

For full details about the print and to find options on how to buy it, check out the Dorothy website here.