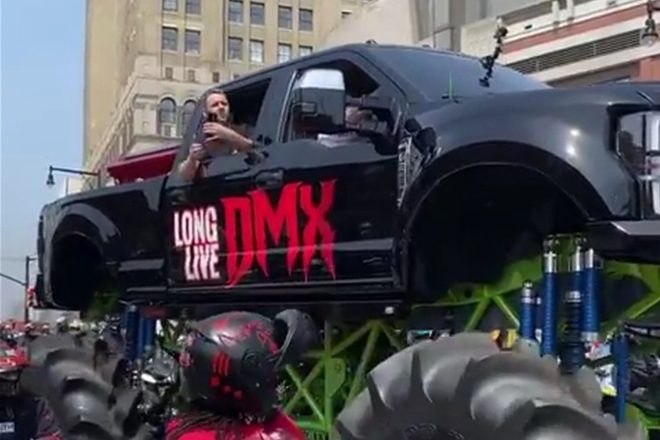 Respects were paid to DMX, the pioneering rapper on Sunday by family and fans alike, who congregated in New York for his memorial at the Barclays Center.

A monster truck with the message ‘Long Live DMX’ carrying the casket of the rapper drove through the city on Saturday, which was also flanked by thousands of motorbike riders. The procession attracted thousands of fans who had come to mourn his passing earlier this month. The ceremony was only open to family and friends, but was made available to stream on YouTube.

Read this next: DMX to be honoured in New York by having statue or street named after him

Many of his contemporaries were in attendance for the two hour ceremony, including Nas, Kanye West and Busta Rhymes. His children spoke poignantly of their father, and the impact he had on both them and the rap scene more generally.

His oldest son, Xavier Simmons called his father a "king" and an "icon" who "deepened" his "ability to love".

While another son, Manny, said “DMX was not just a rapper, he was the best dad ever.”

DMX, born Earl Simmons, was admitted to hospital on April 2 after having a heart attack. Representatives described him to be in a ‘vegetative state’, and many gathered outside the hospital in support of the rapper - hoping for his recovery. On April 9, he went into a ‘catastrophic cardiac arrest’ and passed away. He was 50.

Read this next: A new DMX track with Swizz Beats and French Montana has been released

He was best known for his bravado and energetic, provocative musical style. His first five albums hit No.1 on the Billboard charts, a first for any artist, and he proceeded to sell millions of records. The rapper was also nominated for three Grammy awards during his career.

Watch footage of the funeral procession below.

DMX’s casket has arrived at Brooklyn’s Barclays Center on a massive monster truck for his memorial service pic.twitter.com/Q2L7B2L04D

DMX memorial at Barclays: thousands of bikes and his casket in a monster truck. Incredible. pic.twitter.com/VDeeYS76M5