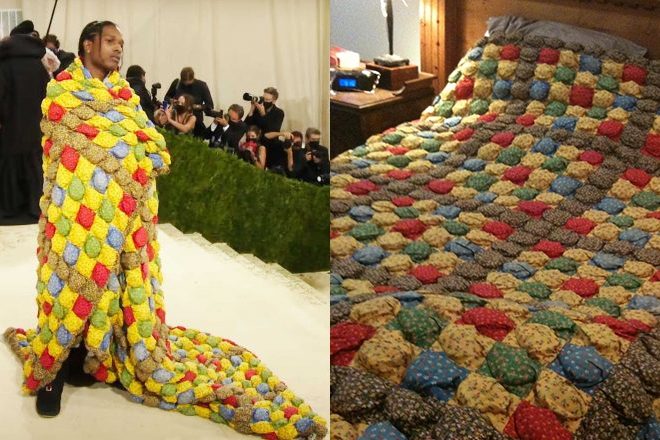 The quilt styled cape worn by rapper A$AP Rocky at the Met Gala was based heavily on a homemade quilt made by someone’s great grandmother.

Described by Vogue as “capturing the spirit” of this year’s Met Gala theme, ‘In America: A Lexicon of Fashion’, A$AP Rocky’s cape was designed by designer ERL (Eli Russell Linnetz).

Referred to as “fashion’s biggest night out,” the Met Gala is an annual fundraising benefit for the Metropolitan Museum of Art in New York City. The event invites a multitude of high profile celebrities.

Read this next: Watch A$AP Rocky talk about how the death of his brother made an impact on his rap career


Designer Eli Russell Linnetz said that during a visit to the young designer’s studio the rapper gravitated to a giant quilt in the ERL spring collection.

Then, a week after the Met Gala, Instagram user Sarah (@books_n_babies) posted about the quilt.

In an Instagram caption, Sarah wrote: “So my great grandmother's quilt was donated to an antique/thrift store a while back. When I saw the #metgala Photo I realized instantly that it had to be the same quilt. I read the vogue article about the designer finding the quilt in Southern California and with his office not that far from us in Venice California, I demanded that my mom go look for the photos of it on our old bed. Looks like great grandma Mary went to the #metgala."

Read this next: 20 east coast hip hop bangers that go off in the club


Sarah also stated that she was not accusing Linnetz of stealing her great grandmother’s design.

This isn't the rapper's first nod to grandma-core fashion as his love for accessories such as the 'babushka scarf' has made the elderly-inspired the mainstream.