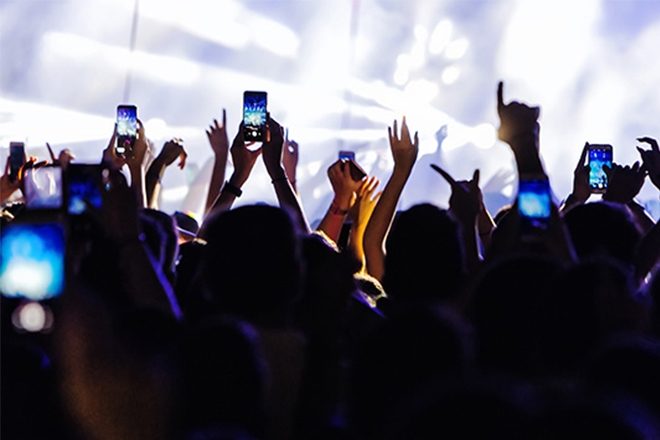 A new study commissioned by Eventbrite has found that 70 per cent of UK gig-goers who have attended a live ticketed event in the past 12-months believe people snapping photos and videos on the dancefloor with their mobile phones takes away from the overall concert experience.

Surveying a total of 1,031 British adults, the research conducted by ComRes has found that 69 per cent of those surveyed would support minimal action to minimize the disruption of fan photography at shows. 13 per cent would back "no phone zones" at venues, 41 per cent believe "gentle nudges to make phones more discrete" would get the job done while 17 per cent would support "audience spot-checks for over-filming."

65 per cent of respondents feel that taking the time to capture images at these events makes them feel as though they are "missing out on the live experience." Despite this, the survey reveals a major contradiction between the expectations of other people’s mobile phone usage and how they behave themselves on the dancefloor. Nearly half (49 per cent) of those surveyed have admitted to taking out their phones at music events to capture the moment on their phones.

Collecting feedback on the survey results from the Association for Electronic Music, Eventbrite spoke to one of the Association’s artist ambassadors - DJ-producer, broadcaster and Sous Records boss, Anja Schneider.

“As a DJ I want to entertain people," says Schneider. "I build a set, maybe it’s an all-nighter, or an after-party slot. You can’t then condense that down into a little piece of video filmed on a phone – three minutes or twenty seconds or whatever. Do I find myself playing to a forest of phones waving in the air? Of course, and for me that’s a problem because you can’t see the people, you can’t see the vibe. You can’t see people’s faces.”

Are mobile phones truly ruining the clubbing experience? Will this raging clubland debate ever be resolved?

Dive deeper into the discussion by going here