A Blue WKD haul worth £280,000 has been stolen by burglars in Scotland - News - Mixmag
Home Latest News Menu 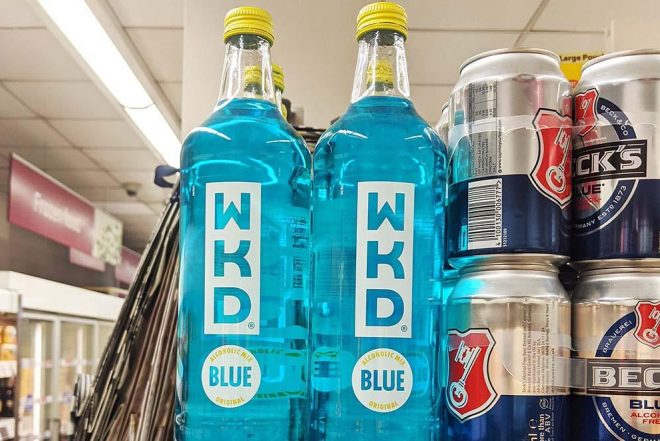 Almost £300,000 worth of Blue WKD was stolen by burglars in Kilmarnock, Scotland, on Monday in a convoy of lorries.

Burglars reportedly broke into a bottling factory in Cumnock to steal the alcopop drinks, loading them into three HGV lorries before driving them away from the scene of the crime toward Dumfries.

Police then discovered one of the three units on fire down the A76 late on Monday night at around 11:45PM, 20 miles East of Kilmarnock.

An estimated 100,000 bottles of Blue WKD were stolen by the burglars in the early hours of the morning. Police are asking for anyone with information on the alcopop thieves to come forward.

One Twitter user mused: "Imagine breaking the law on a £280,000 heist to find out, all you nicked was Blue WKD," while another joked: "I've been planning this heist my entire life".

I've been planning this heist my entire lifehttps://t.co/QDgXrnJttc

“I would like to speak to anyone who has any information on the actual break-in at Caledonian Bottlers or anyone who may have seen a convoy of three HGV vehicles leaving the premises,” said Detective Constable Hugh Dempster in a statement.

The officer asked for anyone who had been sold bottles of the alcopop for below retail price or at a discounted price to come forward.

He continued, “I’d also ask any drivers who were travelling on the A76 towards Mennock, late on Monday evening, to check their dash-cam footage as they may have captured one or more of the stolen vehicles.

Read this next: A TRNSMT attendee buried a bottle of Buckfast on site ahead of the festival

“Anyone who is offered Blue WKD alcohol at a much-discounted price is also asked to contact police immediately as this may be the stolen alcohol.”

Police officers in Scotland are now investigating the break-in, and are searching for the burglars who got away with £280,000 worth of the alcopop.