Before the space on the main dancefloor is even fully cleared, the crowd presses up closely and in layers to claim good viewing spots. They spill over, filling up the wire-guarded catwalk that wraps around all sides above the floor.

Earlier, tonight’s dancehall party got relegated to a side room upstairs. There, bathed in red light from Chinese rice lamps, punters danced to new and classic tunes as they waited for the birthday party below to wrap up. They were relaxed and sociable, but anticipation for the coming battle was palpable all night. Girls perfected their make-up and practiced dance steps wherever space was available: in stairwell corridors, at the food stand outdoors – even at the convenience store nearby. Impromptu and light-hearted dance circles broke out all night. And now that the main event is finally starting, hours later than planned, everyone rushes to see it.

Dance crews take turns showing out, with short choreographies set to familiar riddims beneath flashing club lights. The crowd shouts in approval, gun-fingers in the air over and over again as the dancers take turns performing their best group routines, complete with themes and costumes. This is Pum Pum Tun Up, a weekly dancehall party in the Philippines’ capital city of Manila, and tonight’s event is their first team-style battle, with half a dozen crews competing for cash prizes and recognition. The space they call home is Black Market, one of four connected venues in a renovated warehouse behind a mall in the capital city. It’s on a quiet, industrial side street that’s nearly empty at night, buffered from one of Manila’s many massive highways by overgrown train tracks. 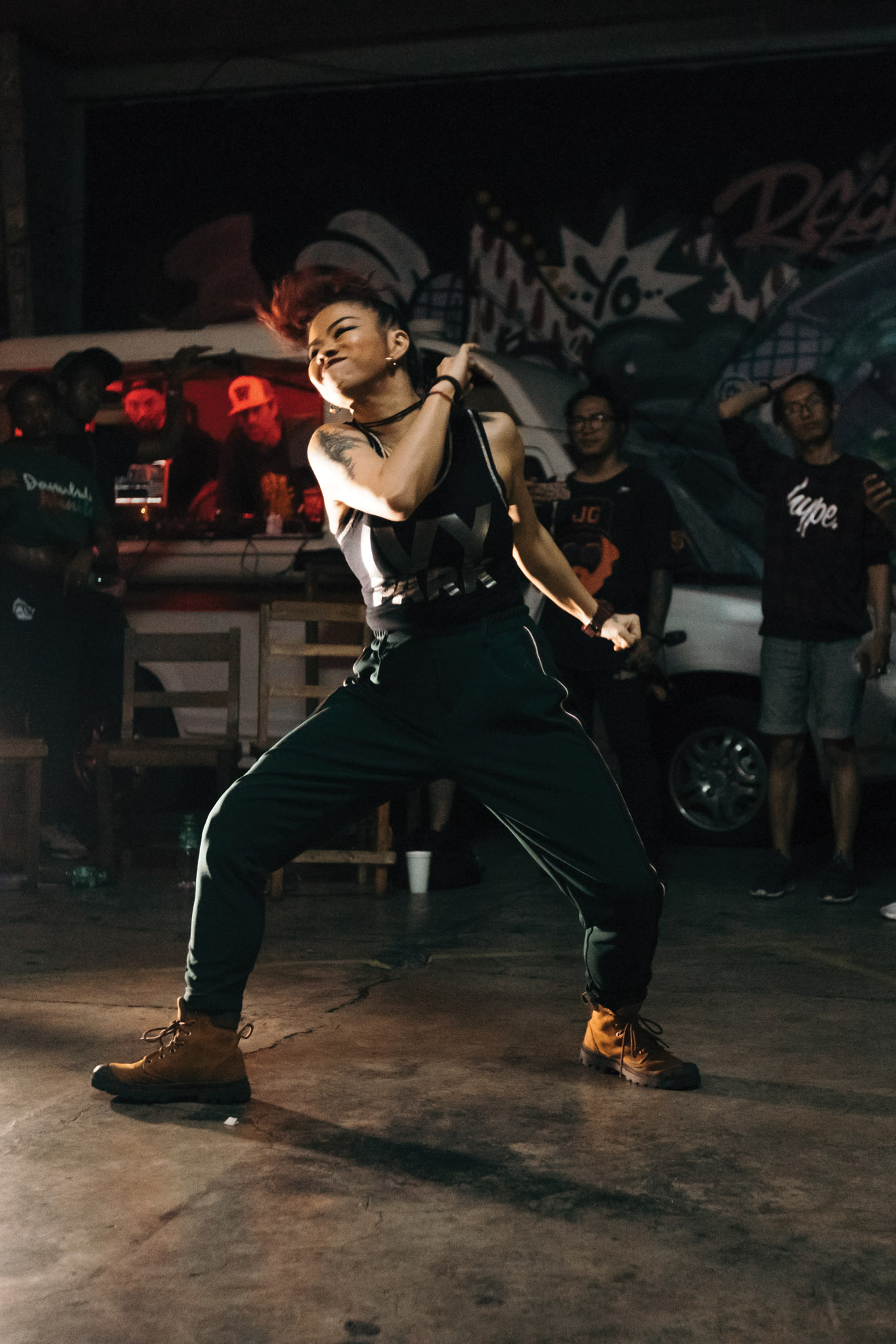 It’s difficult to get much further from Jamaica than here – it can take two days to fly between them – but the power of dancehall culture has allowed these distant island nations to find common ground. Dancehall is having a moment globally, climbing the charts with the help of international acts somewhat divorced from the actual culture itself. But in this south-east Asian city, the scene is a very social one that takes its cues directly from Jamaica. And it’s one driven mainly by female dancers, revolving around performances and battles.

Metropolitan Manila is sliced through over and over with multi-level super-highways and broad streets packed tight with pedestrians, motorcycles and jeeps all jostling for limited space. It’s comprised of 17 separate cities, each with their own mayor, and is home to a population nearly double that of London squeezed into roughly the same amount of space. Within this teeming megacity, dancehall has become a means for a young but thriving community to find each other and express themselves. 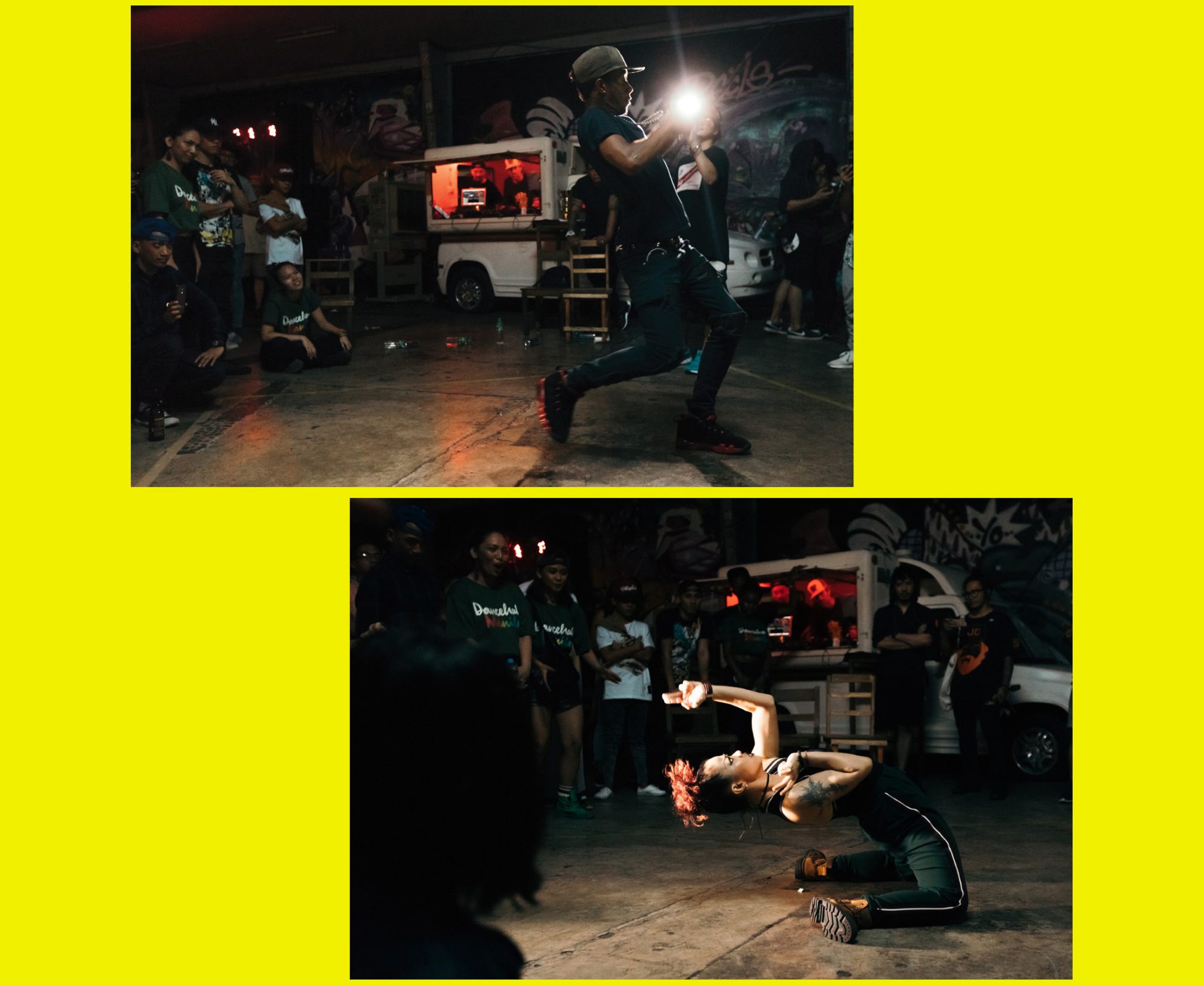 The scene here really only started about two years ago, and revolves around a couple of hundred dancers total. While some of them are spread out across the country, the heart of it all is in the capital region. A collective named Dancehall Manila, founded by Kristal Bermudo and Yen Caballero, is widely credited for setting the spark. Their home is a couple of weekly parties, but it’s grounded in the performances and battles held at those spots. The majority of dancers come from other styles like hip hop or contemporary dance, but are becoming increasingly focused on dancehall. While it’s made up mostly of girls, there are a few guys involved as well, and a couple of transgender dancers can be found in the circle from time to time. While interest and skill level varies, some of the most popular steps here are the Willie Bounce and Bogle Dance, which are both really just grooves involving the arms.

Dancehall had a presence in the club as far back as 1994, says Lema Diaz, but it was mainly partygoers, not serious dancers. She was performing on stage in the club as a teenager then, paid to get the crowd hyped, and the music she danced to was mainly a mix of hip hop and dancehall.

“There weren’t many pro dancers, it was mainly just people who liked to party,” she explains from her dance studio, a 40-minute cab ride from Black Market. Lema stays here with her fiancé, also a professional dancer, and his parents, who own the building. The light-filled space is covered in mirrors and ornate graffiti, and there are a couple of inexperienced but enthusiastic pieces on the street outside, painted by their eight-year-old son. “We all knew the steps though, including the crowd, even if we didn’t know the names,” continues Mama Lema, as the younger dancers refer to her now. “When Elephant Man would say ‘Give dem a run’, everyone in the crowd would do the step. It’s what you would see in the music videos. MTV was big here. Or dancers from out of town would come and bring the vibe. The club is more organic, it’s social dancing, sharing steps on the floor.” There were some dancehall selectors, like DJ Kimosabe, but they’d only play maybe a one-hour set on a night where you’d hear everything from funk and r’n’b to soul. 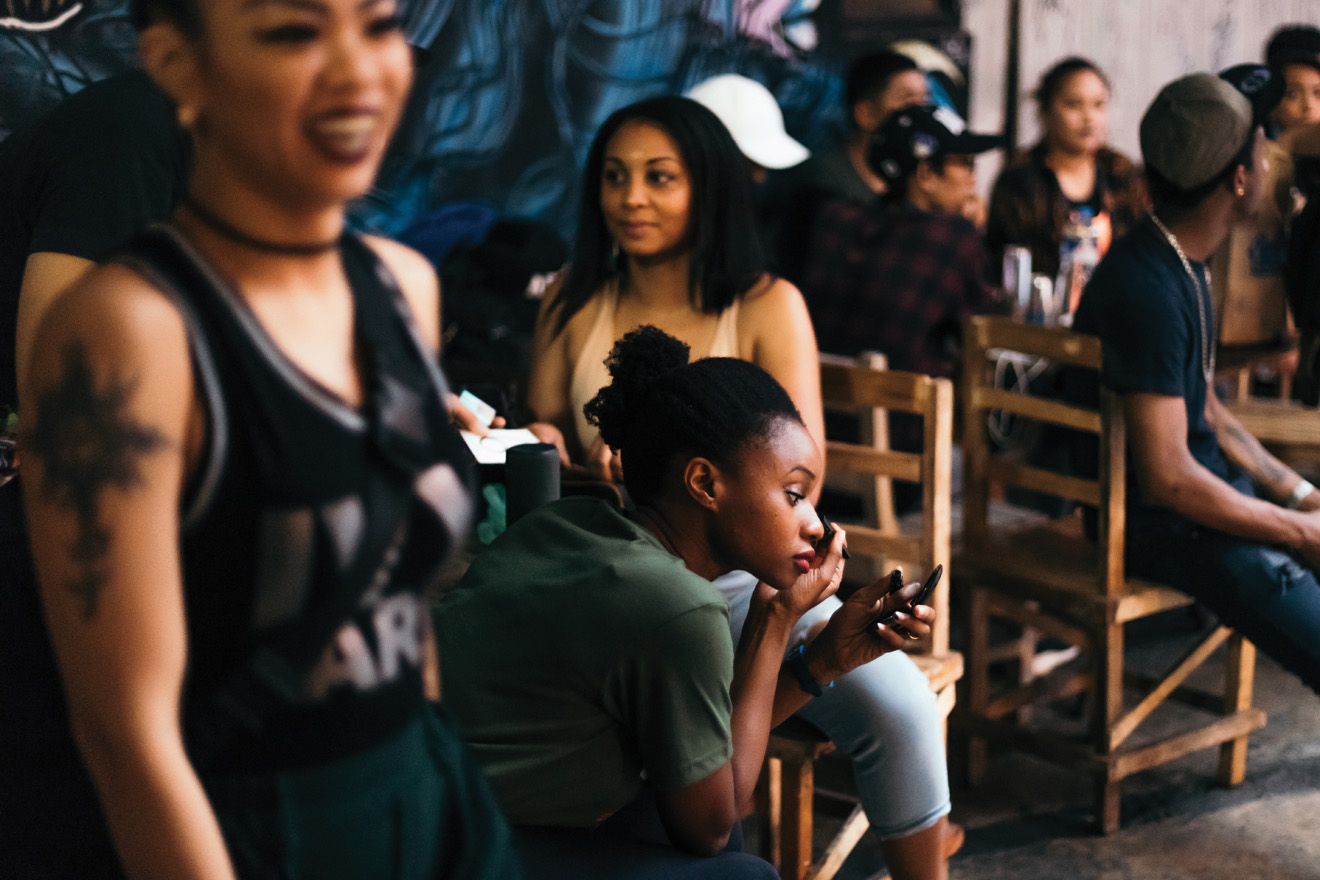 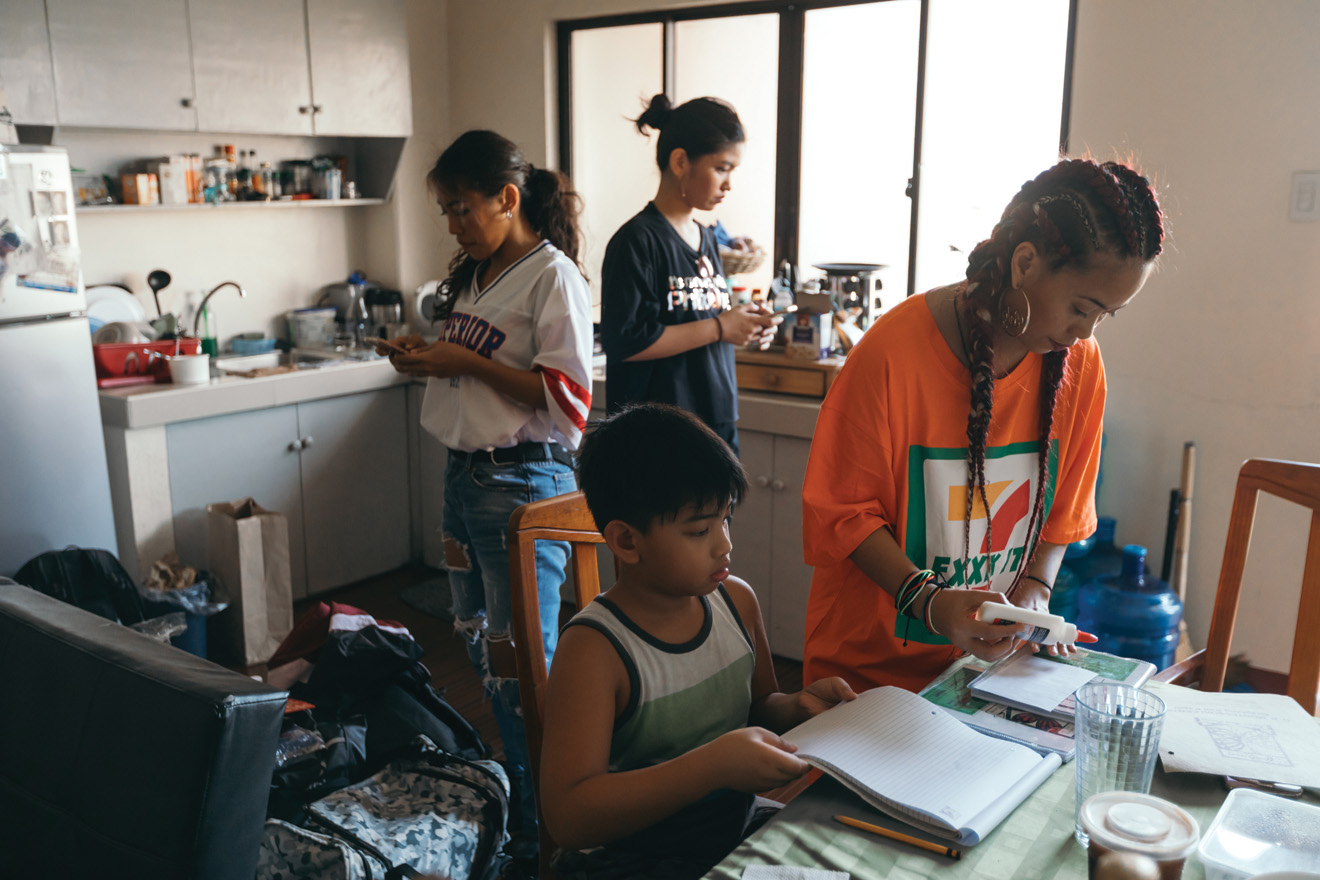 This went on until about 2008 when Lema says EDM hit and changed the nightlife scene, bringing club owners who no longer wanted to engage serious dancers who they feared may intimidate an inexperienced crowd.

The new beginning started for dancehall with Irie Sunday, a weekly reggae night at an open-air venue called B-Side that launched in 2010.

“Before Irie, it was mainly reggae bands, like Bob Marley cover bands,” says Masta T, a Japanese selector with long, dreaded hair who helped start Irie. He moved to Manila about 10 years ago to study English and never left. Within B-Side, a DJ booth is set up in a van parked along the back wall under an open skylight surrounded entirely by new high-rise condos that hint at incipient gentrification. Irie is one of only two weekly parties still happening there. They spin anything reggae-related, like dancehall, roots or ska. 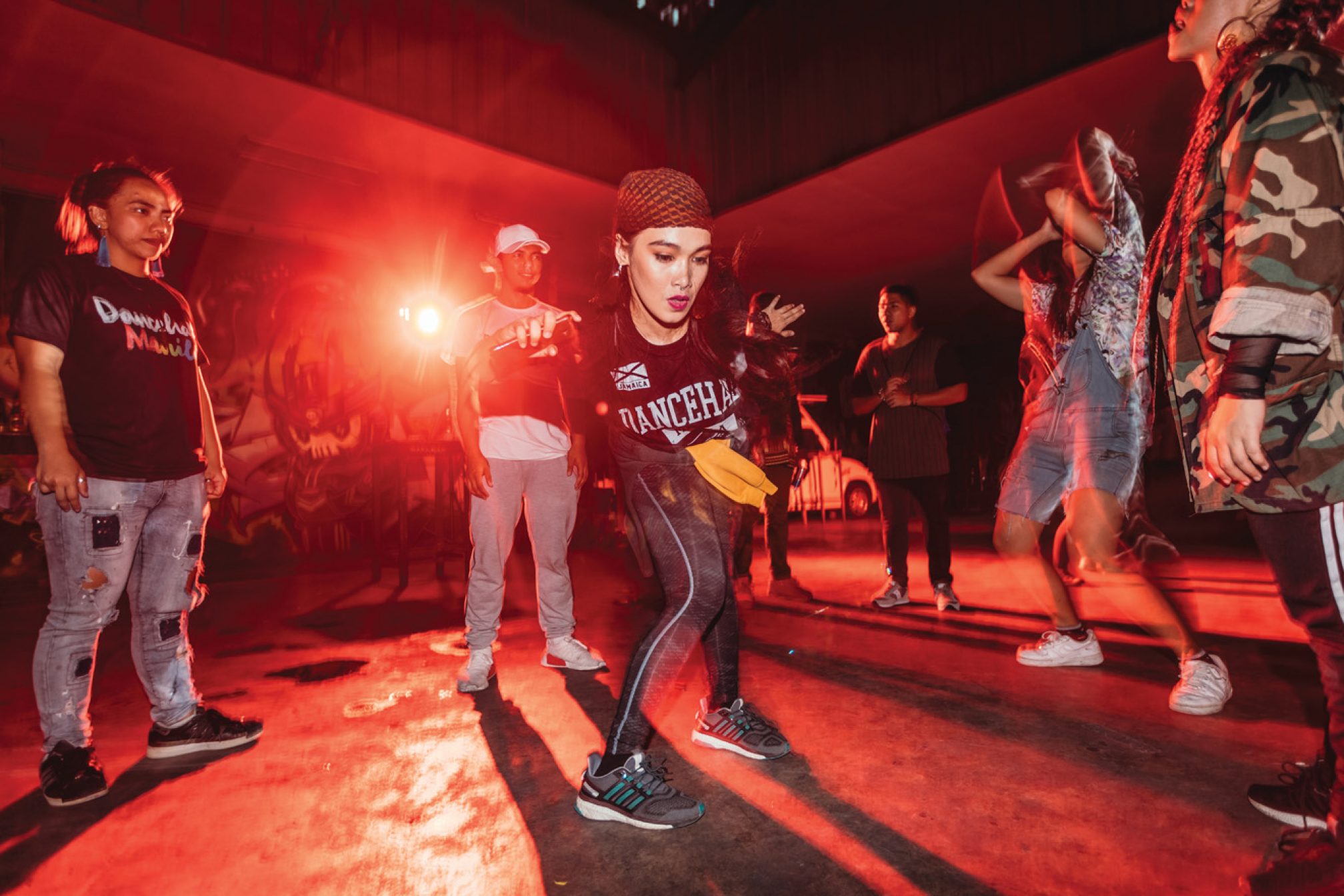 Irie Sunday didn’t focus specifically on dancehall until Phattymaria came on the scene. She’s a half-Japanese, half-Filipina dancer who got her start at clubs in Japan in the 90s.

“Dancehall was still underground then, so only unique people were going to the parties. It was so liberal and free,” she says. Japan would continue to develop a growing love for dancehall – as would Maria. She went to Jamaica to study and won Japan’s Dancehall Queen title in 2007. Although born in Manila, she was raised in Japan until 2011 when forced to move back due to radiation risks after the Fukushima earthquake. When she landed, there was no dancehall. But Irie Sunday asked her to do a showcase, andthen they teamed up for a monthly dancehall-themed version of the party.

At the tail-end of 2013, they decided it was time for a party dedicated exclusively to dancehall. “We’d been trying everything on Thursdays at Black Market but nothing worked. Since it was an off night, we figured why not put our money on what we like,” saysPJ Martinez, a venue owner and DJ. He’s a Filipino with closely shaved hair and a scruffy beard who grew up in LA, where he was first exposed to dancehall - indeed the Manila party is named after LA’s Pum Pum Tuesdays.

Pum Pum Tun Up struggled for a few years – much as Irie Sunday did at first. But the venues allowed them time to grow. “Crowds are scared to go to see acts they’ve never heard of,” says Anna Sobrepeña-Ong, who is managing partner at both venues, as well as at a few others across Manila. “But these events are what makes us different. It’s about the passion,” she explains, adding tellingly that her husband, who’s another founding partner and DJ, also has a day job in renewable energy. 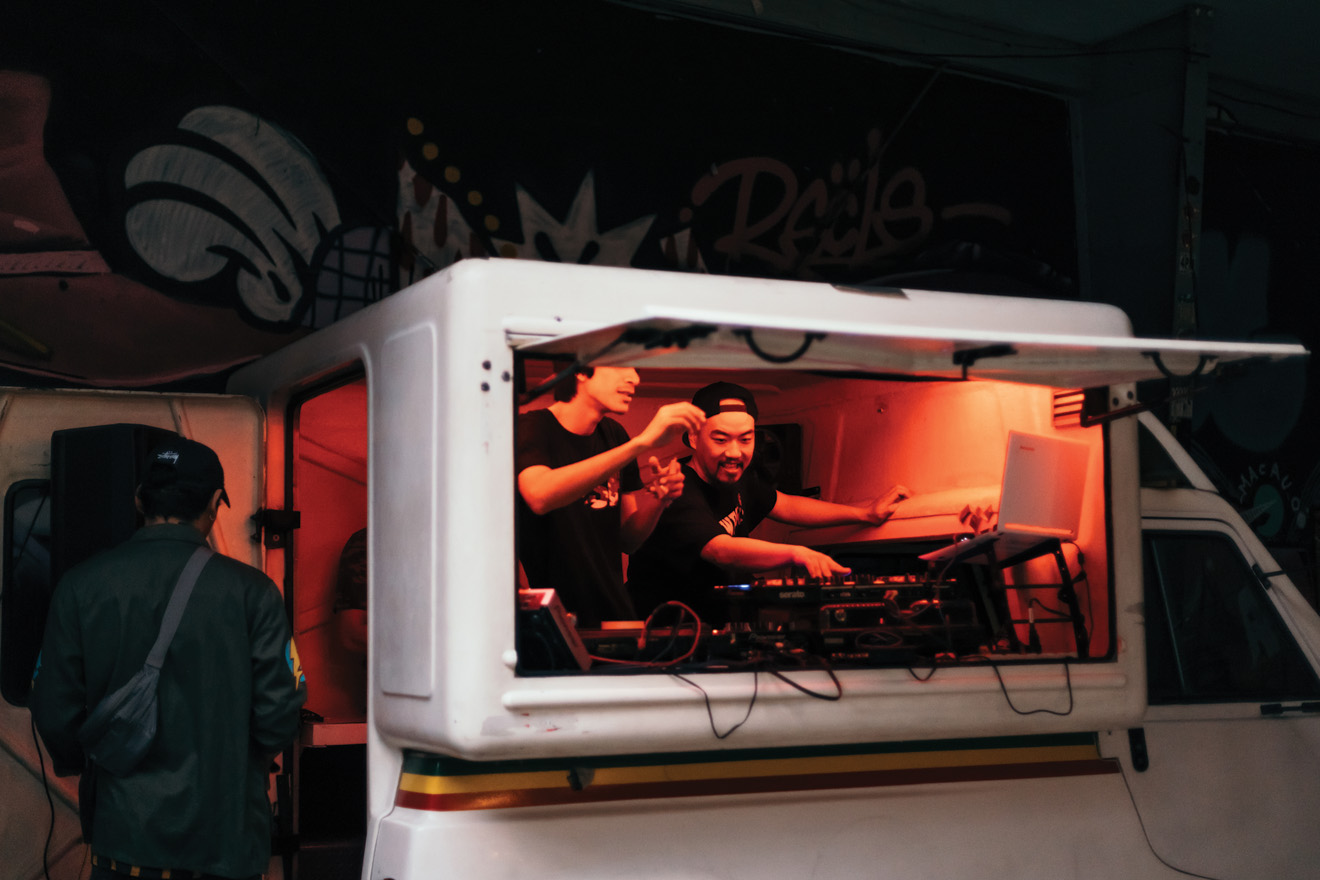 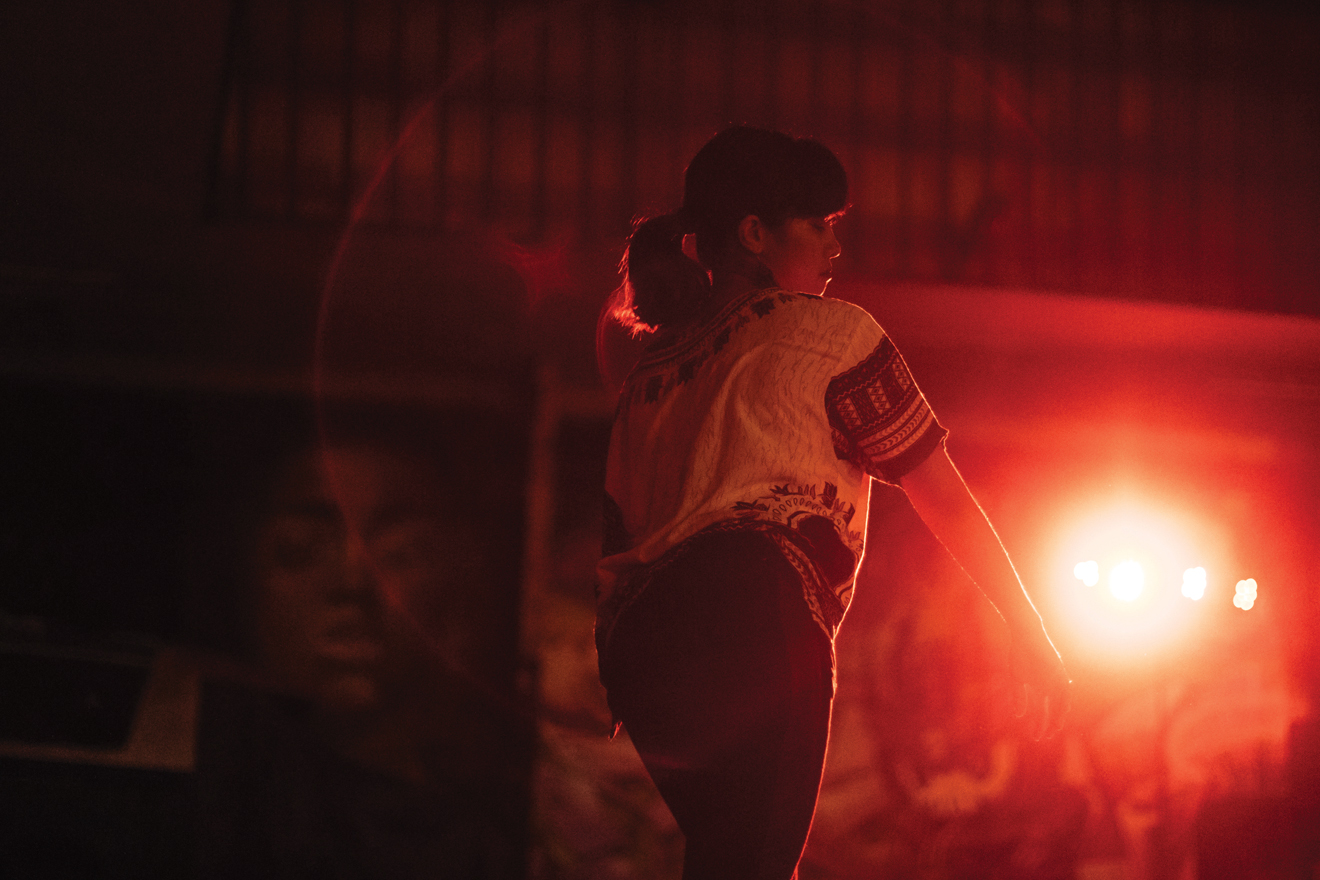 It wasn’t until the dancers made Pum Pum their own that it started to pick up. “There were a lot of dancers here, but they were coming from different styles – mainly hip hop,” says Maria. “So we started asking them to come to the party but to only dance dancehall-style. That’s when I met Kristal Bermudo.”

Petite and pretty, Kristal got her start as a cheerleader in high school and went on to become part of one of the Philippines’ oldest and best-known hip hop dance teams, The Philippine Allstars. She met Dancehall Manila co-founder Yen Caballero at Pum Pum Tun Up; the two clicked almost immediately, and founded the collective early in 2016. They managed to bring Kristal to Singapore, and the videos from their time there sparked a lot of interest at home, which continued to grow as they brought international dancers to Manila from Japan and Jamaica.

That momentum continues to build, as seen in the events Dancehall Manila holds over the holiday season. There’s the first international competition, bringing in girls from Japan to compete with Manila for a dancehall queen championship, full of dancers pulling out all the stops. One is brought into the circle in a gift-wrapped box that she explodes out of; the dancehall queen costume staples of wigs, leotards and fishnets put Halloween to shame. A Japanese dancer wins this one, but Yen is still beaming. “When we started, we weren’t even twerking. We didn’t know how to isolate our butts, but now they’re all doing these exhibitions,” she says of the progress the battle reveals. “The Japanese have been dancing for a lot longer and have been to Jamaica a lot, so I’m proud of my Filipinas. We’re inspired and motivated by it.” 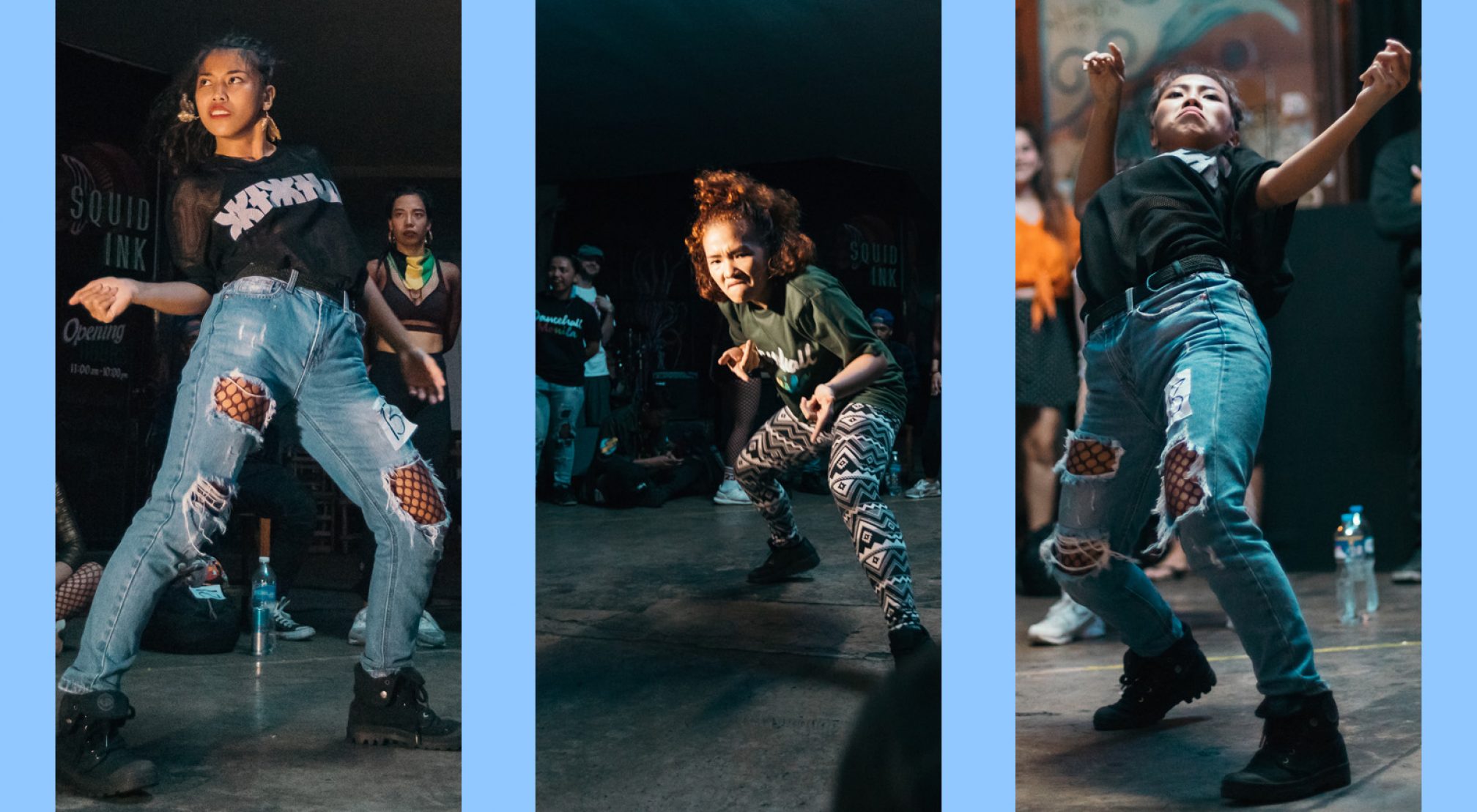 The team style and queen style battles following shortly after are further evidence that this young scene is rising. Lema wins the crew battle with two younger but talented girls, both in their early twenties and only dancing 'queen' style for about two years. They’re most passionate about dancehall, but their respective dance teams are hip hop-focused. The winner of the recent one-on-one battle, which has individual dancers freestyling against each other, has also only been interested in dancehall for two years and comes from a background in contemporary dance. “I look for the dancehall vibe, the authenticity of it, originality, musicality, and character. Also dancers who don’t repeat their steps,” says Kristal, who judges these most recent events but recuses herself from competing.

The movement is exciting to all of them, including participants from Jamaica. “To see dancehall culture travel this far is such a great thing,” says Craig Black Eagle, a Jamaican dancer who judges many of the above events, while helping to hand out awards after the crew battle. “You all should big up yourselves.”