Walking into La Grotta, the only nightclub on the Maltese island of Gozo, feels like stepping into the old photographs of Amnesia and Pacha so eulogised by dewy-eyed, first-generation ravers. You're immediately greeted by a stone dancefloor encircled by Roman pillars, open to the night sky on two sides, with classical statues emerging from lush foliage that are bathed in streaks of lasers and avalanches of CO2. This spectacular venue is more accustomed to hosting wedding receptions than UK ravers, but tonight is the opening party of the inaugural Abode On The Rock and the room is swarming with tattooed boys and girls dancing to PAX’s ‘Electric Feel’.

After a quick lap of the palatial club, we bump into Abode co-founder Kai Cant. As he looks around the heaving dancefloor his expression is a mixture of fervent satisfaction and joyful relief. It's quite the feat to convince thousands of ravers to take a punt on a new festival held on an island nobody's ever heard of and as it turns out, Kai's relief isn't just that everyone else has turned up, but that he made it too. Just a few hours ago he was getting an emergency passport in Barcelona after leaving his on a connecting flight. "I've got ADD, I forget everything. It was costly. It was long. But it was worth it in the end," he laughs. Over the course of the next seven days, the Abode crew will hold their first international festival here in Gozo, before jetting off for the opening of their new Thursday night residency at Amnesia. On the cusp of international domination, Mixmag will follow the crew through this most pivotal of weeks.

Abode has six residents in total and investing in such a big roster has gifted the brand an enviable depth of programming, meaning it can comfortably fill a night with residents alone. This wealth of talent is on full display at Friday's opening party, which is an all-residents affair. Jack Swift and Devstar open with a garage-meets-deep house set. They're followed by Will Taylor and then GW Harrison, who each play energetic tech-house sets. After GW, Manchester's Jimmy Switch takes over for an underground set spanning genres and tempos. Finally, Ellie Cocks closes with a heavy techno assault.

In keeping with the family vibe, Kai has a story about each one of his residents. "I met Jimmy when I was running a party called Fortay. A mate told me to keep an eye out for him and he started sending me his mixes. I got him to play for me a few times at Fortay and then when I launched Abode, he was our first resident. GW Harrison was doing all our artwork and graphics when we first started. He'd been doing a small party down in Kent and I got him to play on our second Abode show, everyone loved him and he's been with us ever since. Ellie, I was in Fire on New Year's Eve for Magna Carta, I went into Room 4, a tiny little room and it was absolutely going off in there. I'd never seen anything like it. 200 people, loads of girls behind the booth. I put a post up the next morning saying 'does anybody know who was playing in Room 4 at this time last night.' Everyone tagged Ellie Cocks and then I met her and she became a resident. Will, I'd been following him for like six or seven years. I tried to book him for the first Abode party, but he was living in Ibiza. We got him for the second one though and he's been with us ever since!" 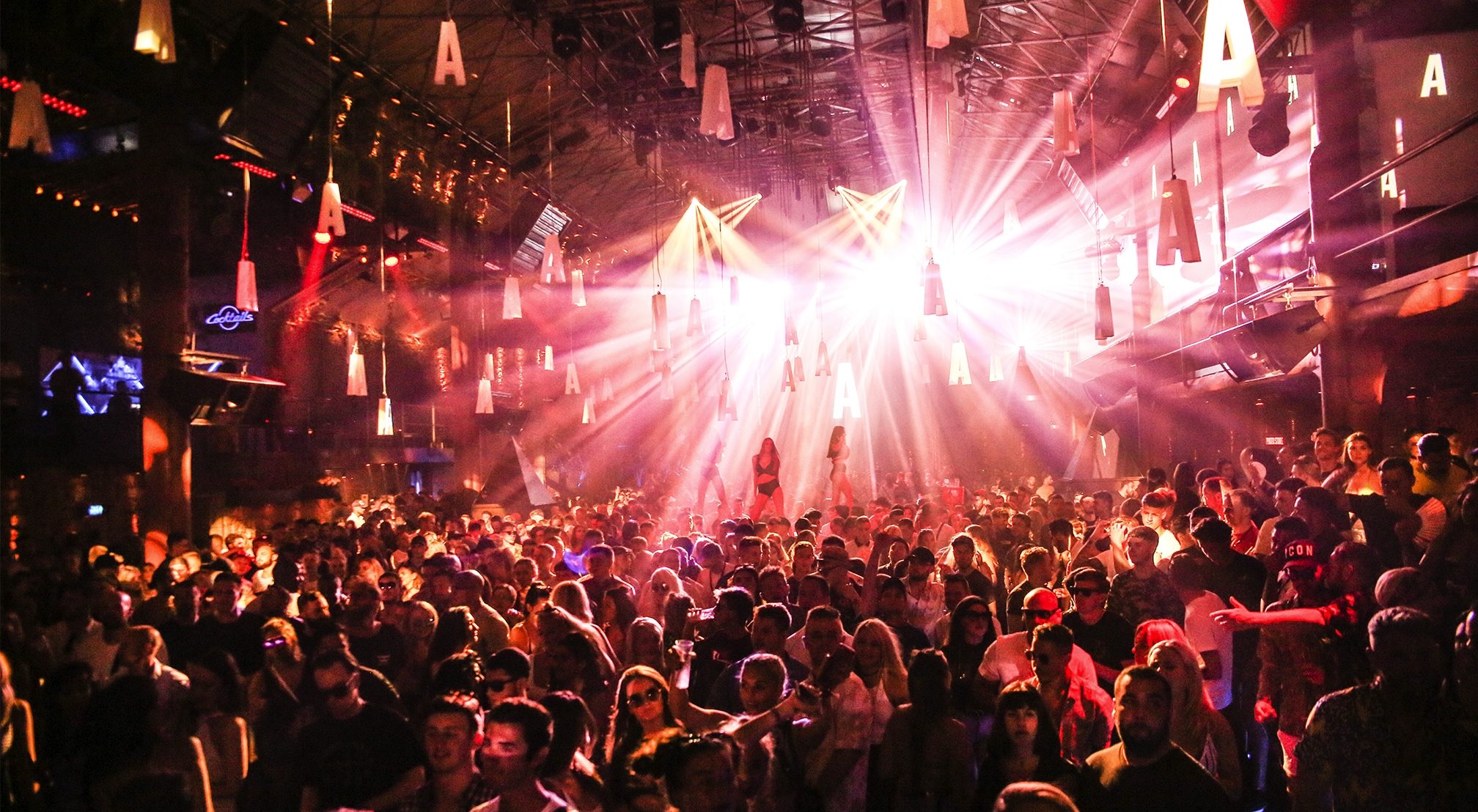 It's this little-bit-of-everything music policy that has endeared Abode to so many fans. When it began in 2014, brand-focused events such as Elrow and Glitterbox were still in their infancy and most parties lived and died on the strength of their headliner. For Abode to eschew big names in favour of low key DJs was a bold move. Despite booking names such as Nic Fanciulli, wAFF and Sam Divine in the early days Abode would promote them as a 'special guest'. "This meant we could book them at a cheaper cost and reinvest the money into the party, particularly into our residents, who deserve recognition for keeping the party alive," says Kai. It also meant they quickly grew a loyal following, who would come purely for Abode and their residents, rather than following music trends or hyped names.

Abode's music policy is such a hit with the fans that a record label was the next logical step. Launching in 2016, Abode Records has hosted not just releases from the residents, but an enviable roster of artists including Citizenn, Franky Rizardo and Alexis Raphael. This year saw it release its Ibiza 2018 compilation album, a huge 50-track affair packed to the gills with Abode-approved dancefloor destroyers. Nestled among tracks from Camelphat, Solardo and Steve Lawler, each of the Abode residents have contributed at least one track to the comp. It's many of these homegrown tracks that get the biggest reaction at the opening party, particularly Will Taylor's massive Cera Alba collaboration ‘Verano’. As Friday night winds down, talk quickly turns to Amnesia. Will and GW Harrison are so excited for the week ahead they're practically vibrating. "I went there for a soundcheck, I ran from the booth up to the balcony, to take it all in. I was out of breath by the time I got up there, the room is that big!" laughs Will. 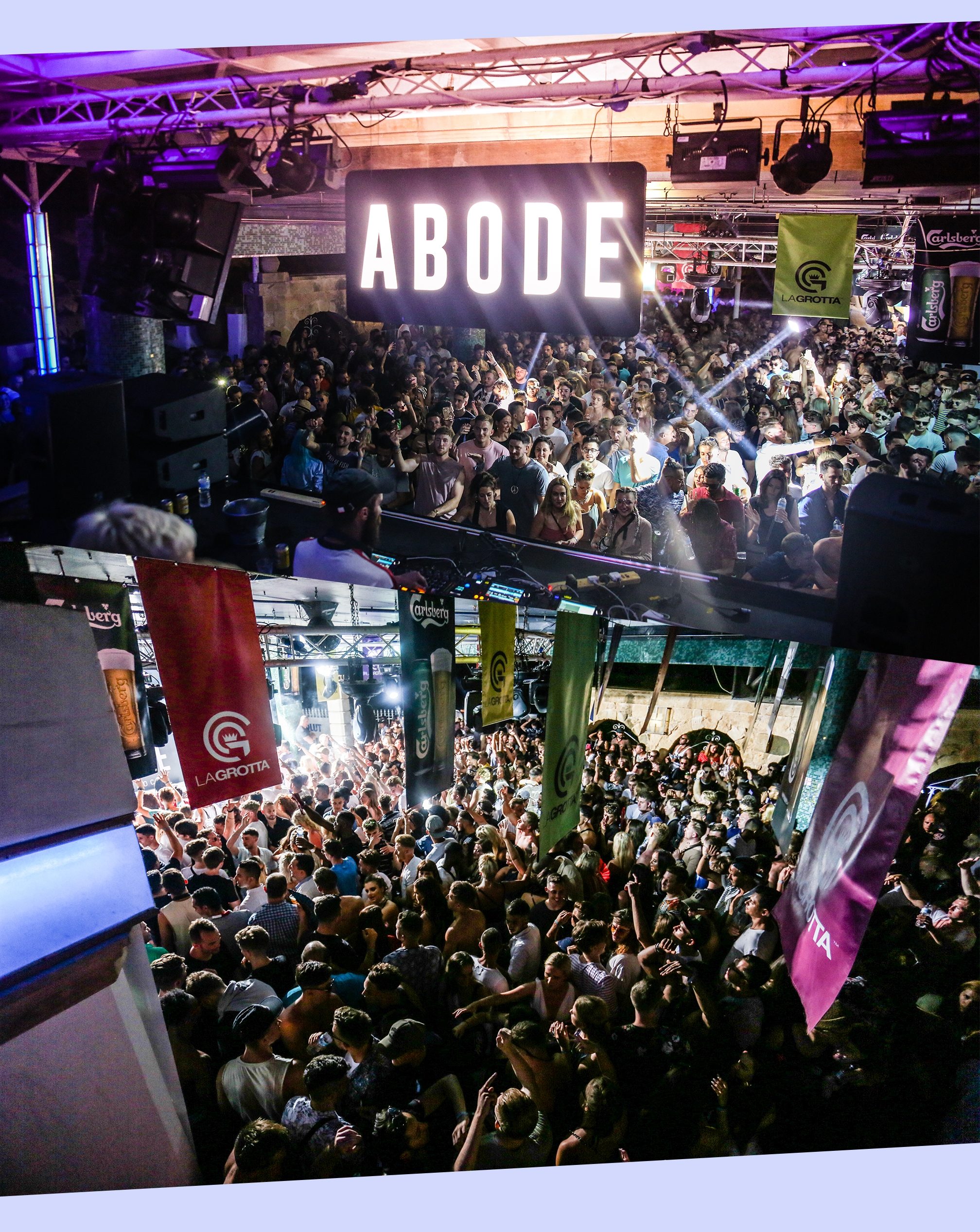 On Saturday it's all aboard the HMS Abode as we venture out into the Mediterranean for what's billed as a Bloody Mary Boat Party. There isn't a Blood Mary in sight, but nobody seems to notice as GW Harrison and Will Taylor are on deck and on the decks. Standing shoulder to shoulder in front of a custom-made Abode pirate flag, they take the party from hungover to having it before we've barely left the dock. Out on the seas, it's choppier than expected and some people are struggling to stay on their feet, but whether that's due to a lack of sea legs or fuzziness from the night before is anyone's guess. After a tour around the archipelago's stunning coastline, we come into port alongside a boat full of bemused sightseers. As we dock the inevitable 'one more tune' chant ricochets around the harbour and Will and GW indulge with upwards of five final tunes including the Booka Shade classic ‘Body Language’. Before the tunes finish Will climbs onto the roof for a dance, which sends the crowd into hysterics and the lifeguard into an arm-waving rage. 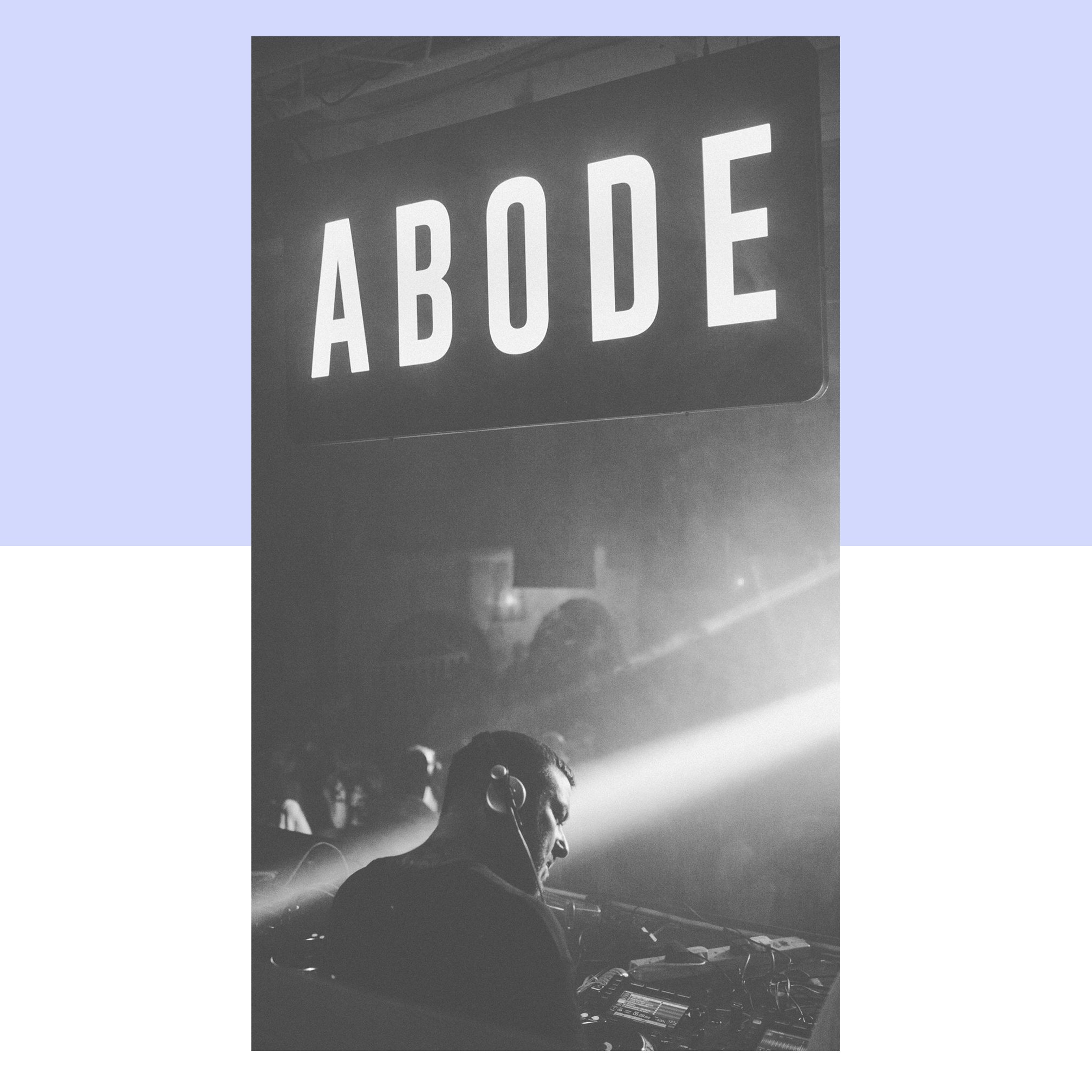 "In Gozo everywhere is 15 minutes," our driver, Josef, laughs when we ask how far it is to Sunday's Villa party in the hills. On arriving we're greeted by a Scarface-esque villa that would cost a king's ransom on Ibiza. Sneaking our way onto the roof, we look down at hundreds of ravers on a colossal terrace dancing away to Richy Ahmed. It's the kind of sight that suggests Malta could one day be a serious contender for Ibiza's crown. The blistering heat does nothing to bring down the energy, and sets from Santé, Richy and the Abode residents go off like firecrackers. It's a triumphant end to a debut festival and an impressive one at that. Held on an unknown island, with no past footage, photos or reviews, Abode managed to sell-out on the strength of its name alone.

For Kai the biggest success is seeing the whole event go off without incident. Abode was founded as a response to what Kai saw as an increasingly violent clubland. He has gone to great lengths to ensure his events are welcoming, problem-free affairs. Employing the strictest of door policies from the get-go and rewarding loyal Aboders with free parties, Kai was able to implement his vision of an aggro-free party, "Since we've been doing Abode I've never seen a single fight, there's never been any issues with knives or guns or anything like that. I think people know that we just won't put up with it."

Just a few days later, Mixmag is gazing up at a sea of capital A's hanging from the rafters of the Amnesia Terrace. Below the party is in full swing with tech-house hero Secondcity manning the decks for hundreds of dancers. Amnesia's massive DJ booth is overflowing as the Abode crew has come out in force. After a massive set from Solardo, the residents take over for the biggest set of their lives. Watching the full troupe swarming the booth, I'm reminded of my early days of raving, watching the Ed Banger crew partying together behind the decks. It might seem like a grandiose comparison, but in all fairness, Ed Rec never had their own festival; or an Ibiza residency for that matter.

The nervous energy from On The Rock has morphed into jubilation among the crew and the party is all the better for it. In many ways the night felt like a victory lap, a culmination of four years graft from a young and dedicated team. Whether the crowd was aware of this energy is hard to say, they were certainly giving it all they had, but then again this is Abode, that's pretty standard procedure. 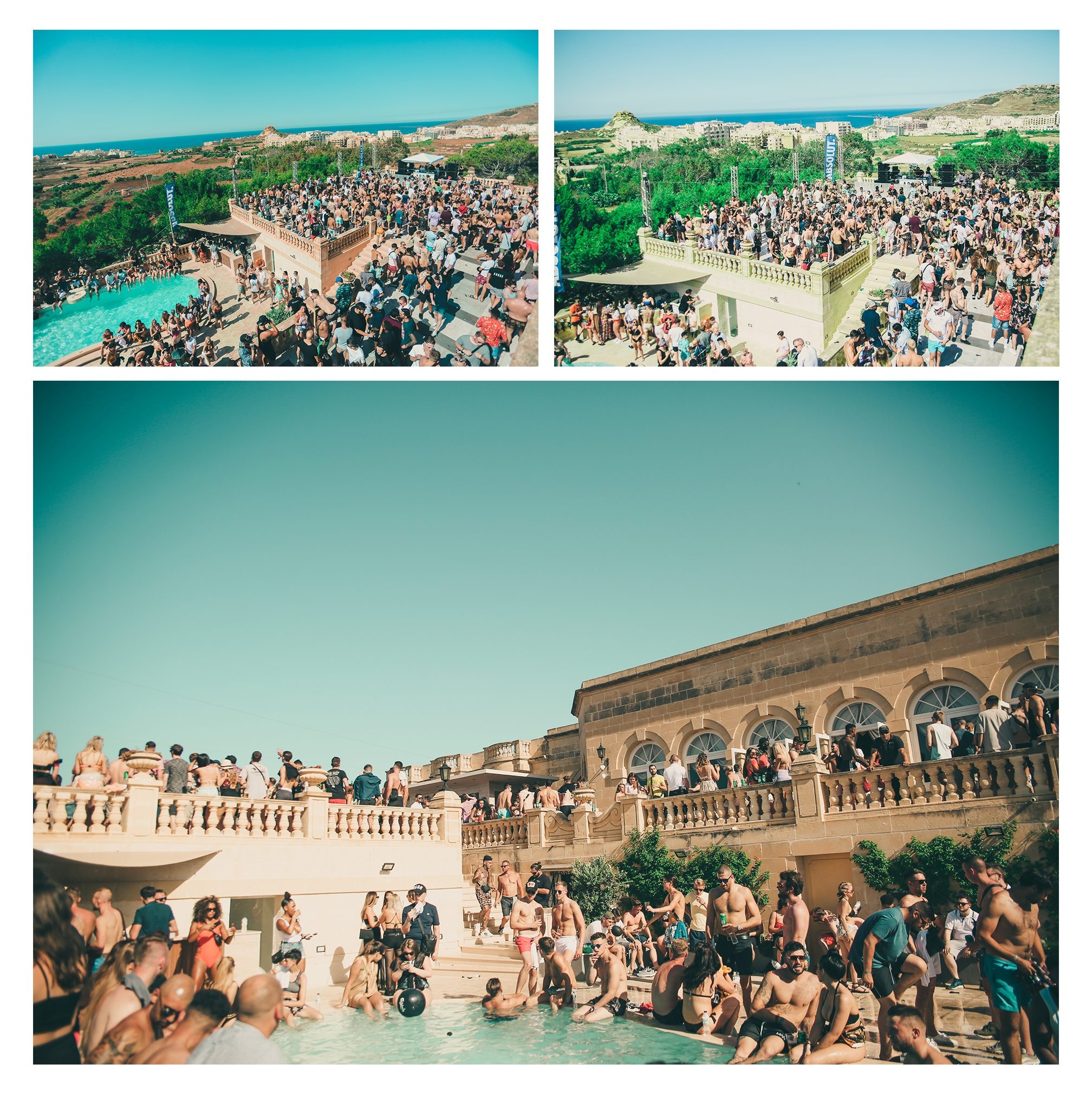 With such a rapidly ascending brand, It'd be easy for the team to focus solely on promoting, but charity work has become an integral part of the Abode family. Kai, who joined the army after leaving school with no education at 16, spent the first six years of his career travelling the world and being confronted with horrifying poverty. "I always dreamed of going back and helping," he says. Abode’s first fundraising event was in aid of a regular, Courtney, whose father had been diagnosed with terminal cancer. "He needed a specially adapted van to get him around and we ended up raising £30,000 and we gave it to the family to buy the van and to adapt the house."

After that, they raised £20,000 for children with Down's Syndrome and then with their third they raised money for a trip to Uganda. "I went about a year and a half ago and I bought the land, built a school, then I went back last year and built an orphanage. I'm going back in October this year to build a playground, a medical centre, kitchens and offices. It's nice to get out there and give back." When talking to Kai I was impressed to hear that it wasn't just a case of going over there, building a school and then leaving, "we pay the teachers’ salaries, kids’ medical bills, food, water. It's something I love. It keeps me on the right path."

Matthew Francey is Ministry Of Sound’s Managing Editor and a contributor to Mixmag. Follow him on Twitter here