Will they? Won't they? These are questions that have swirled around Daft Punk with increasing regularity as time goes on and their legendary status goes up and their annual public appearances goes down.

In their mid 90s to mid 00s heyday, the robots fronted magazine covers, turned out a legendary Essential Mix, DJ'd all over the place and embarked on two seminal world tours, not to mention release three groundbreaking albums. Their entry as one of the finest dance music acts of all time was confirmed very quickly but there was a mystique around them as soon as they adopted sci-fi costumes and constructed their futuristic live shows.

Since that explosion, the band have retreated from the limelight, choosing only to do select press and appear at A-list events like the GRAMMYs. And because their vintage only continues to age well like a fine French red, their fanbase remains at large and interest in them continues to peak at fever pitch. These days, rumours light up the internet like wildfire.

And because Daft Punk continue to subvert how a dance music act should look, act and behave, sometimes their actual stunts, like hosting the album launch for 'Random Access Memories' in a remote Australian town, are more outlandish than the rumours themselves. Nobody knows what to expect from them, or what's about to turn real in the Daft Punk universe, something Guy-Man and Thomas must revel in behind the scenes.

Here are some of the best rumours about the band, starting with the most recent...

The Weeknd played the 2021 Superbowl and Daft Punk fans went into overdrive with rumours that the rapper would recreate his 2017 GRAMMYs performance with the robots.

Although plenty moments from The Weeknd's performance went viral – including Daft Punk trending on Twitter – the robots did not make an appearance, leaving fans angry, disappointed and open to ridicule from internet memesters themselves.

Daft Punk last released a studio album eight years ago – perhaps the distance is making fans read a little too much between the lines.

The Weeknd ft Daft Punk - The Grammys 2017 Live from pierre hachach on Vimeo.

Don't even try to talk about new Daft Punk music unless it's 100 per cent confirmed. That's a lesson that cult Italian film director Dario Argento learned when he told Italian press that his forthcoming film Occhiali neri would be scored by the robots.

Apparently Daft Punk had got in touch with Argento after hearing he was working on a new movie, but just two days later a statement was released denying everything – even the conversation Argento said he'd had with the band.

Read this next: Unseen Daft Punk footage has emerged online

It seems fairly obvious that Daft Punk would be fans of Argento – his film Suspiria is a horror classic and its synth-laden soundtrack by Goblin is one of the best of all time. But the excitement around any new Daft Punk music is so high that it simply can't be teased through offhand comments to the press (we're flinching at the meltdown both parties' management must have had over this) and, with a slated release date of 2021, we're yet to see whether Argento's slip of the tongue ruined his chance to have Occhiali neri scored by the robots.

Given that reddit just wrecked the stock market, it's unsurprising that the internet's largest community has the power to launch fresh Daft Punk rumours at will.

Talk of a new Daft Punk album originated on r/DaftPunk in 2020 when record label 'documents' seemed to 'reveal' that the robots had a 13-track album on the way, complete with collaborations with some of the band's favourite musicians. 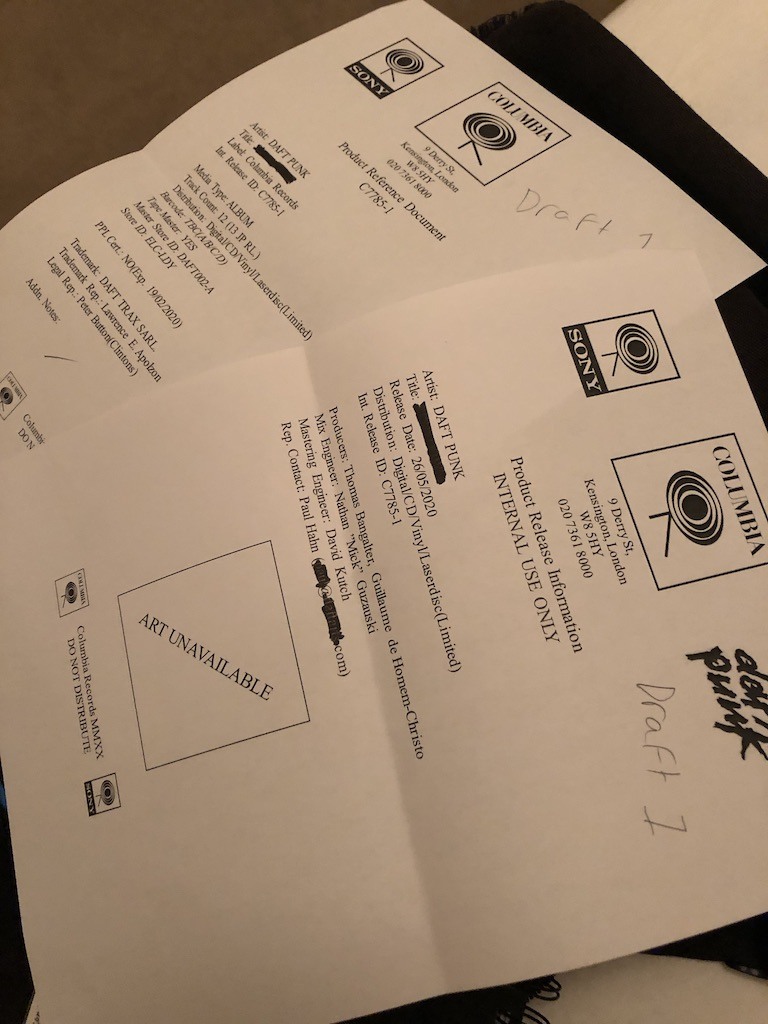 The 'documents' were painstakingly put together, complete with Sony and Colombia logos, legal spiel and – most brilliantly – Sharpie markings to cover up the track names and album title.

Such a fine forgery had the internet ablaze – but members of our staff had seen it all before and certainly weren't falling for it again (the Reddit user responsible for the original 'leak' also came clean after the news went mainstream).

An Italian Coldplay fan account on Instagram circulated the rumour that the band had collaborated with Daft Punk for their forthcoming 2019 album. The track, said to be called 'Mission A.B.O.R.T.', was part of a 'tracklist' that bears absolutely no resemblance to the LP that Coldplay did put out that year, the double-disc 'Everyday Life'. While the album was supposed to be a return to Coldplay's 'alternative' roots, we're still not sure how a Daft Punk collab would have fitted with their aesthetic. However, as mentioned before, nothing can ever be certain when it comes to the robots (apart from outlandish rumours, of course)...

Daft Punk rumours have become so powerful that up and coming producers are even using them to promote new music. In 2018 an artist we now know to be TIKNIK created an anonymous SoundCloud account containing a snippet of music claiming to be new Daft Punk material. The link was circulated on the – you guessed it – r/DaftPunk forum, which sparked debate as to the veracity of the music. After a generous amount of plays, TIKNIK eventually confessed that it was their creation and duly released it as an official track – 'Baby You Want', out on Sidekick Music.

The year is 2017. It's been 10 years since the Alive tour. Finally, new Daft Punk dates have been announced!

Mixmag got the exclusive on the announcement of the R△CK and R▽LL tour, which would take place over 25 dates across the world at venues like Lol Angeles Colosseum and Club Falso in Mexico City.

Read this next: Will Daft Punk ever tour again?

“Each show will be presented in 4D sound: this version of Daft Punk will be so real that you will be able to see, hear, touch and taste us," the band said, while a source close to the robots revealed that the pyramid structure would be back because “it’s been sitting in Guy-Manuel’s garage gathering dust for about a decade” and that “it would be a shame not to use it – for old time’s sake, at least.”

The Daft Punk universe went wild. Unfortunately the date of the announcement was April 1.

At the height of the EDM bubble when superstars like Steve Aoki, Deadmau5 and Calvin Harris were bagging their first residencies in Las Vegas, it was whispered that Daft Punk would follow suit. How naive to think our robot friends would entertain the masses with such frivolities as cake throwing and bottle service!

Every year without fail Daft Punk are rumoured to play the two biggest festivals on the planet: Coachella and Glastonbury.

Without fail some wise guy creates a 'leaked' version of the Coachella flyer, while Glastonbury's annual secret slots – reserved for friends of the festival or pop acts entering their golden years – are ripe for Daft Punk speculation.

In 2017 Pharrell was asked to comment on whether the robots would play Coachella for the first time since 2006 that year: "The robots are, like… they’re not repeaters. Who knows, right? They traditionally don’t repeat. They like doing things that you don’t expect them to do and in ways that you don’t expect them to, and when you freak out, and you want more, and it’s like, ‘No.'”

In 2016 hype around a possible Daft Punk performance at Glasto meant Emily Eavis had to publicly quash rumours saying "that's not true. I don't know where that came from."

Remember when we said that the period between '97 and '07 was Daft Punk's most prolific? Well, rumour has it that Guy-Man and Thomas were getting paid a million dollars each per show for their 47-date Alive tour in 2007. How much of that was spent on the production and actually running the tour, we'll never know, but we're betting that booking fee would be a lot more now...

Given Daft Punk's robotic get-up and epic pyramid live show, it's understandable that some naysayers would choose to think that Guy-Man and Thomas chose to be "hands-off" during their gigs, preferring instead to go through the motions and clap in time like the EDM superstars they were unknowingly paving the way for (epic stageshow, anonymous costumes, extravagant live films - yup, all Daft Punk). However this Mixmag spread proves otherwise, offering a view into the pyramid that clearly shows a range of hard and software.

We know that Guy-Manuel De Homem-Christo is the great grandson of Portugese military figure Francisco Manuel Homem Cristo who was exiled to France in 1910 and the grandson of Portugese poet Homem Cristo Filho. However, it's rumoured that further back in his family tree, he has ancestors who rode against Henry V in the Battle of Agincourt in northern France in 1415 during the 100 years' war.