RÜFÜS DU SOL are at their most powerful in the live arena. The Australian trio have become one of the hottest tickets in electronic music over the last decade, with the emotion and dynamism they pack into their surging sounds hitting hardest among a heaving crowd in the outdoors — ideally at sunset. Acknowledgement of this feeds into Sundream Tulum, the band’s debut destination festival, uniting all the key factors needed to tailor a next-level experience for their fans.

Read this next: RÜFÜS DU SOL are fast becoming one of the world's most popular live electronic acts

Held at Papaya Playa Project, a luxury beach resort on the shore of the Caribbean sea offering guests the chance to both party in paradise and engage in healthier practices, Sundream serves up four days of music and wellness activities in a blissful setting. A session of sunset yoga helps you limber up for dancing into the night when a different kind of sesh begins. 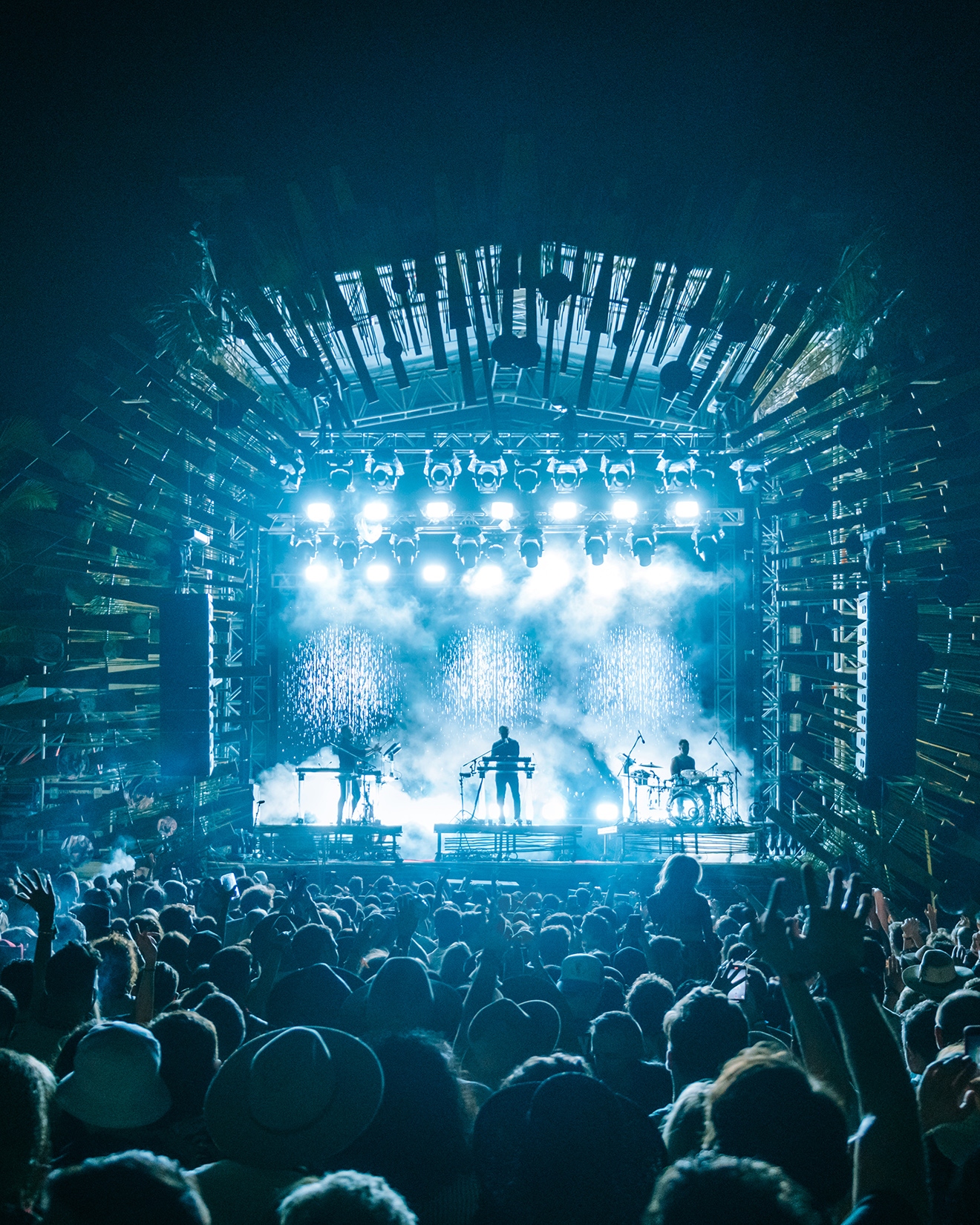 RÜFÜS DU SOL’s headline set on the opening night is immersive and compelling. While their roles in the studio are fluid with each member contributing to the instrumentals and lyrics, on stage they’re defined: vocalist and guitarist Tyrone Lindqvist is flanked on either side by synth player Jon George and drummer James Hunt, each member separated by their positioning atop mini platforms on the stage but uniting as a musical force. Their layered tracks are pushed to bold heights: at times Tyrone prowls the foreground of the stage as he belts out lung-busting verses that soar above Jon’s potent melodies and James’ sharp percussive hits.

A set climax is hit with ‘On My Knees’, a pulsating single from their latest album ‘Surrender’ which was largely written in LA during lockdown. That track in particular was inspired by yearning to get back out on stage. “We fantasised about that so often,” says Jon the following evening. “We were imagining the crowd being able to enjoy the feeling that we felt in the studio, and followed that vibe and idea to make it larger, grander, more dynamic.” You can feel catharsis in the performance.

Read this next: The Cover Mix: RÜFÜS DU SOL

Other highlights include the lofty synth sirens of ‘Innerbloom’ and the Radiohead-referencing ‘Wildfire’. The crowd are well up for it throughout: singing along word-for-word and losing themselves in the sounds and bright visuals created by creative director Katzki that reflect off the ocean psychedelically. “Merging nature and technology is at the heart of what we do,” says James. “That's something we are constantly exploring in the studio, sampling ambient sounds like the ocean and then sending it through a bunch of processing and delays, making it trippy.” The setting of Sundream helps build on that dimension to their music: by the midway point of the set there’s a small graveyard of shoes piled next to us as people discard their footwear to luxuriate their skin in the cool sand of the beach-turned-dancefloor. 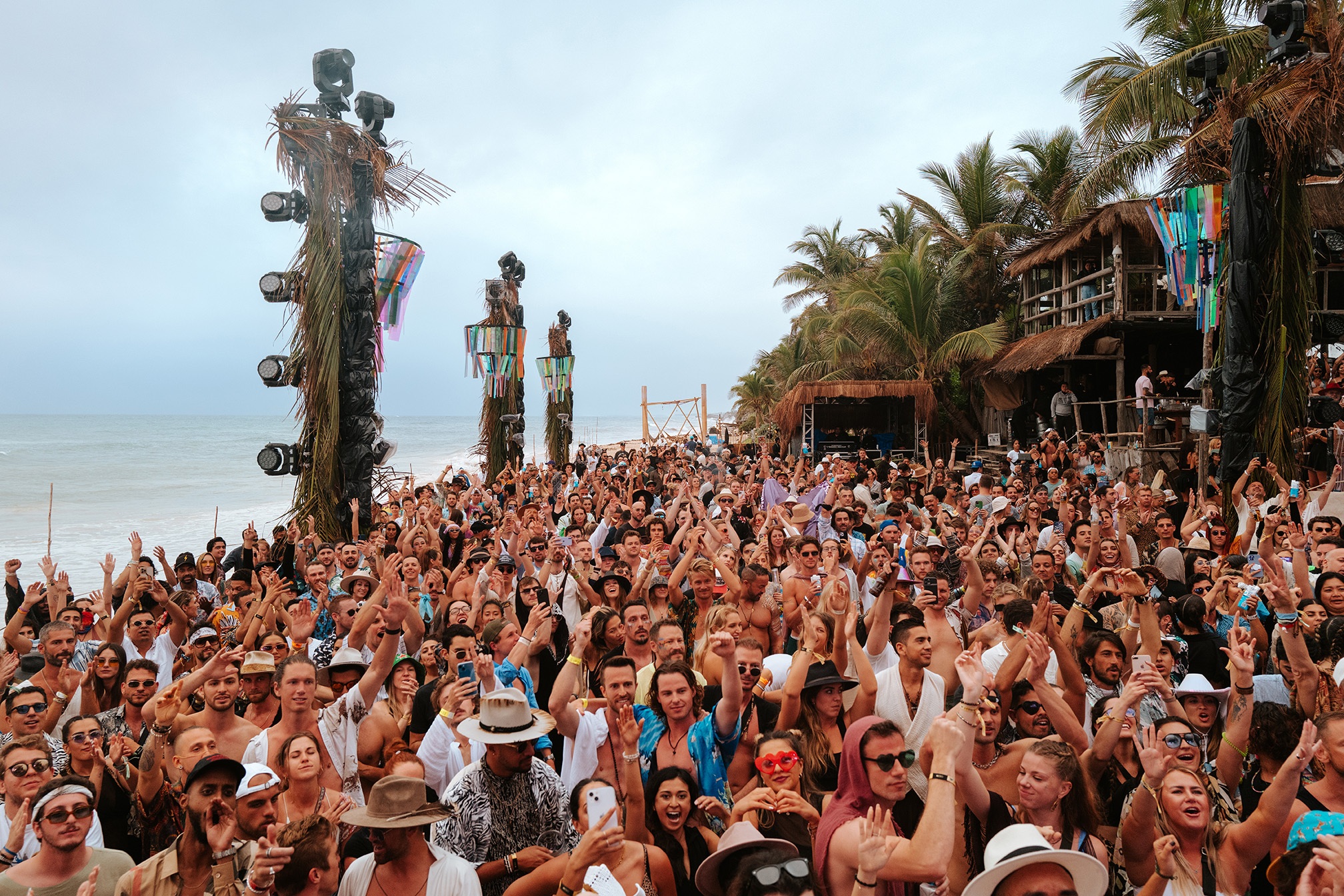 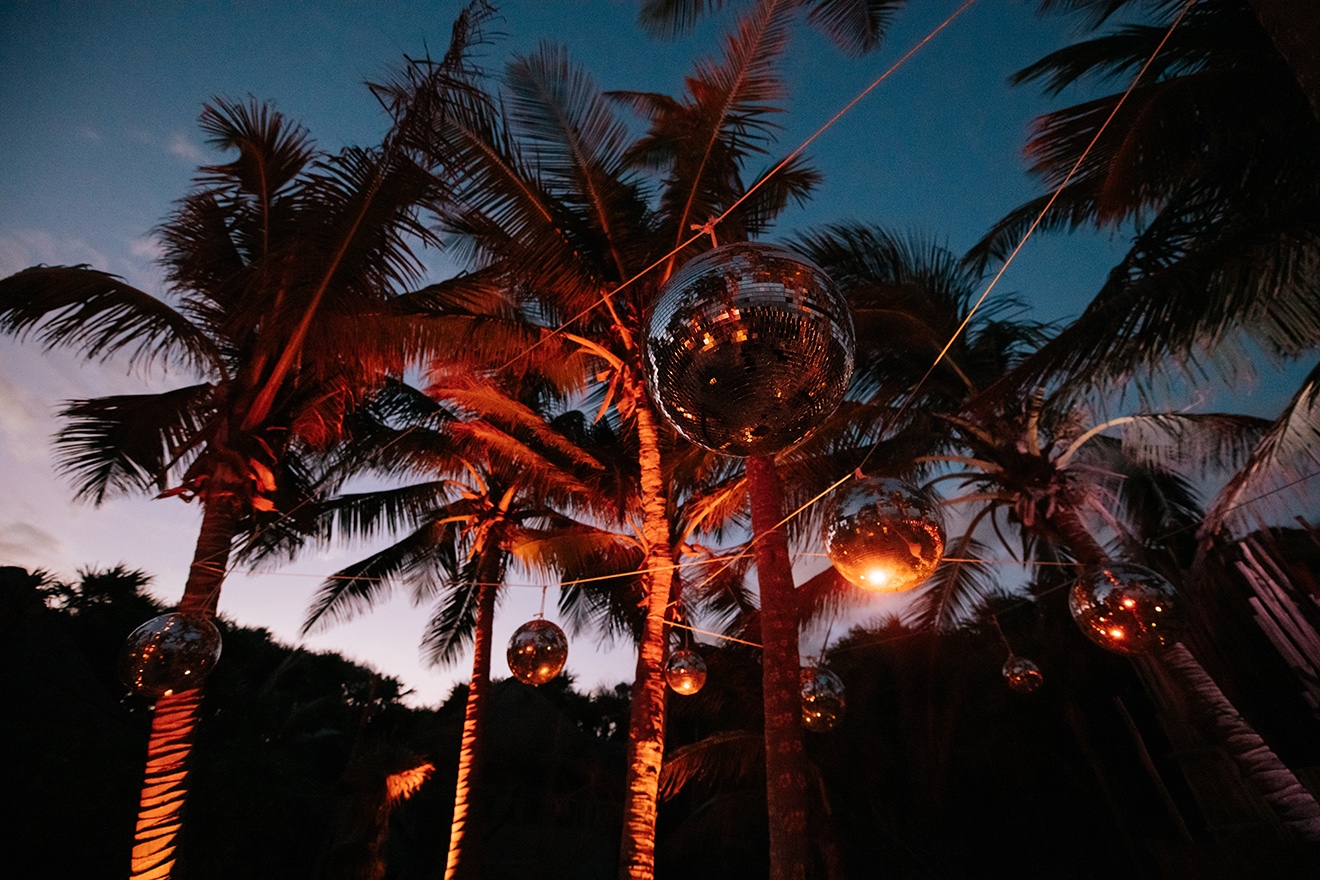 At one point Tyrone takes a pause between tracks to pay respects to the beautiful site and acknowledge the “custodians of the land”. “We're bringing a bunch of people and a bunch of infrastructure and a bunch of things into this place that we are not from, and we want to be respectful of that,” elaborates Jon the next day, noting that all merchandise for the event was designed and produced in Mexico. The best food stall on site is run by a group of Mayan women who serve up spicy tacos and sweet tamarind water.

The writing process of RÜFÜS DU SOL’s latest album, which features GRAMMY-nominated track ‘Alive’, was helped by developing a greater level of respect for themselves and each other. Their meteoric come-up came with parallel chaos, especially around their third album ‘Solace’. “We'd been running ourselves into the ground, the way we were writing music was staying up till 6:AM every night, not taking care of our bodies, not taking care of our relationships,” shares James. The pandemic brought an opportunity to reset and refocus.

Read this next: Have you got 'rave fatigue'?

While completing ‘Surrender’, they took a six week studio trip to Joshua Tree where they started each day with group meditation and intention sessions. “It’s made me feel a lot closer to the guys,” says Tyrone. “We've always been close in the studio and friends, we've worked together really well, but there's been conflict and difficulties over the course of years of being together and touring, and it all builds up. We didn't necessarily resolve a whole lot of things. Having that time and structure to expel our energy and talk about our feelings was very reparative. It felt like we were more compassionate and empathetic towards each other and probably towards ourselves.” 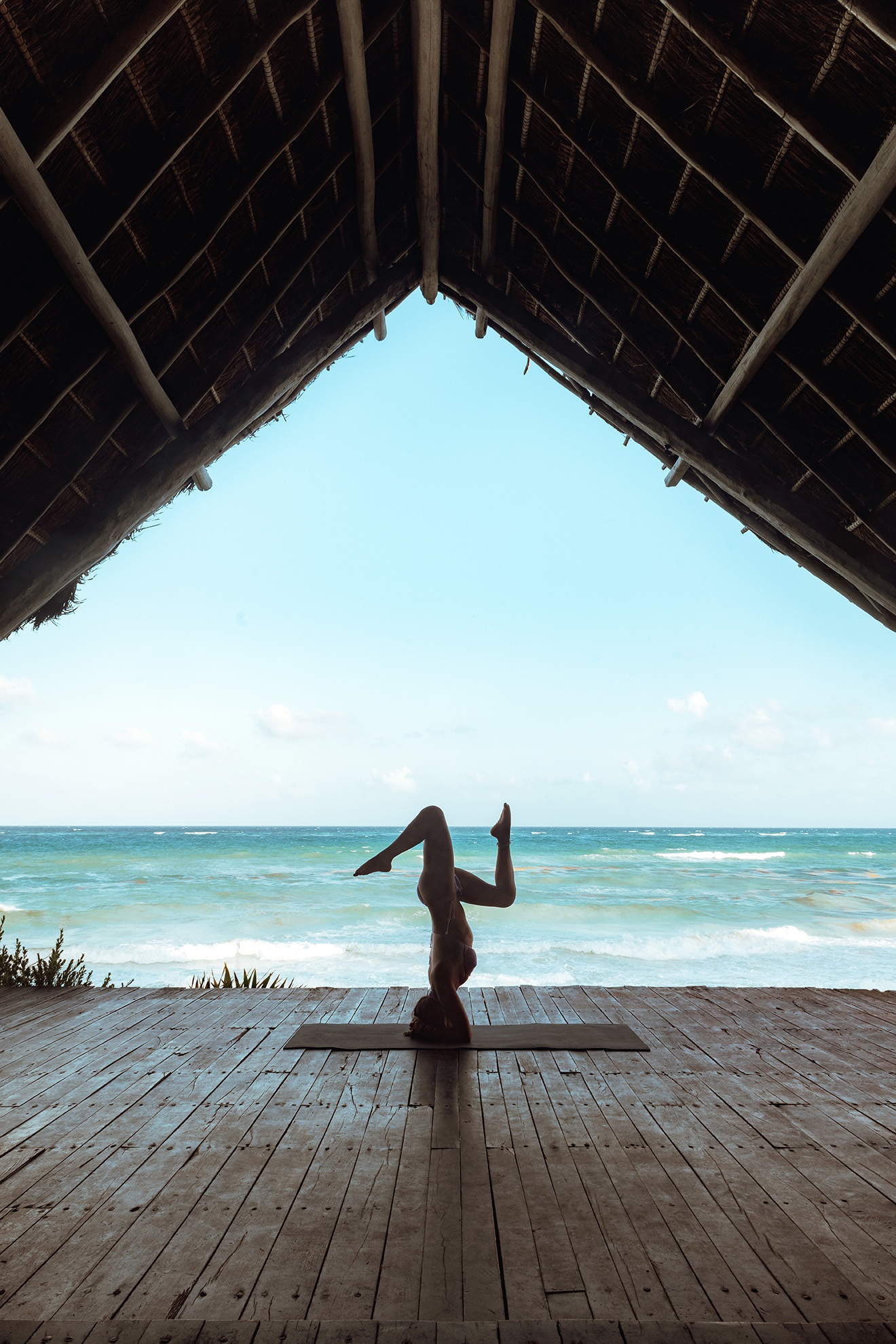 They’re now carrying healthier practices forward in their life outside the studio. “The way we were before wasn't sustainable. It was chaotic,” notes James. “Now we have our coach Ben come on tour, before shows we do ginger shots now instead of whisky. I can now come off tour feeling fitter than when I went on, whereas before it was very much the opposite. I enjoy it way more now.”

Those experiences inspired the inclusion of wellness activities into Sundream for anyone seeking the option. “It's never preachy. Everyone should be doing what makes sense for them,” notes James, with Jon adding: “We love to indulge and hedonism is not lost on us, because a lot of people who love our music are in a zone to come and not be judged. I just love the idea that we are there trying to indulge ourselves in all of the humanly possible wellness aspects, and then we're able to rave too.” 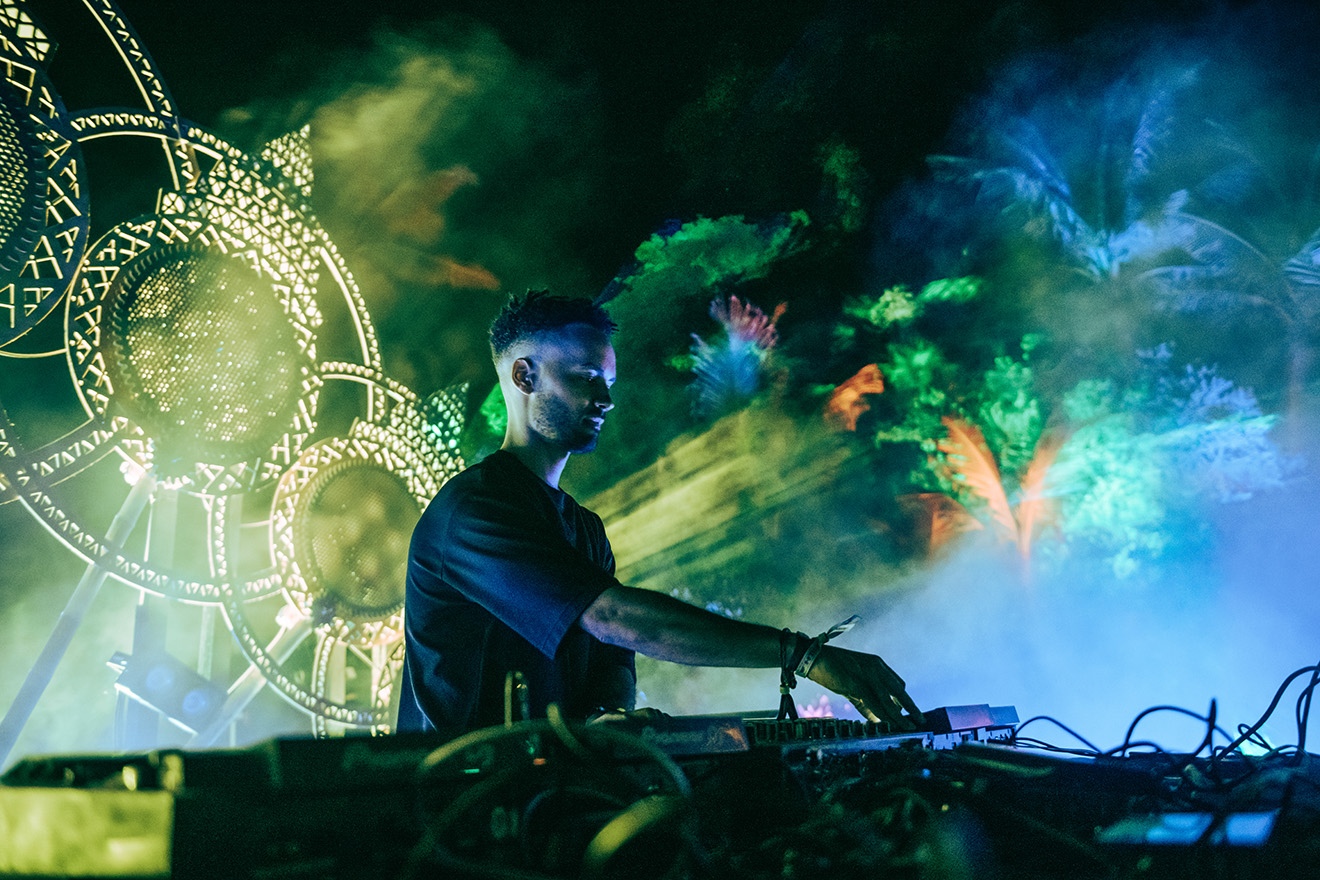 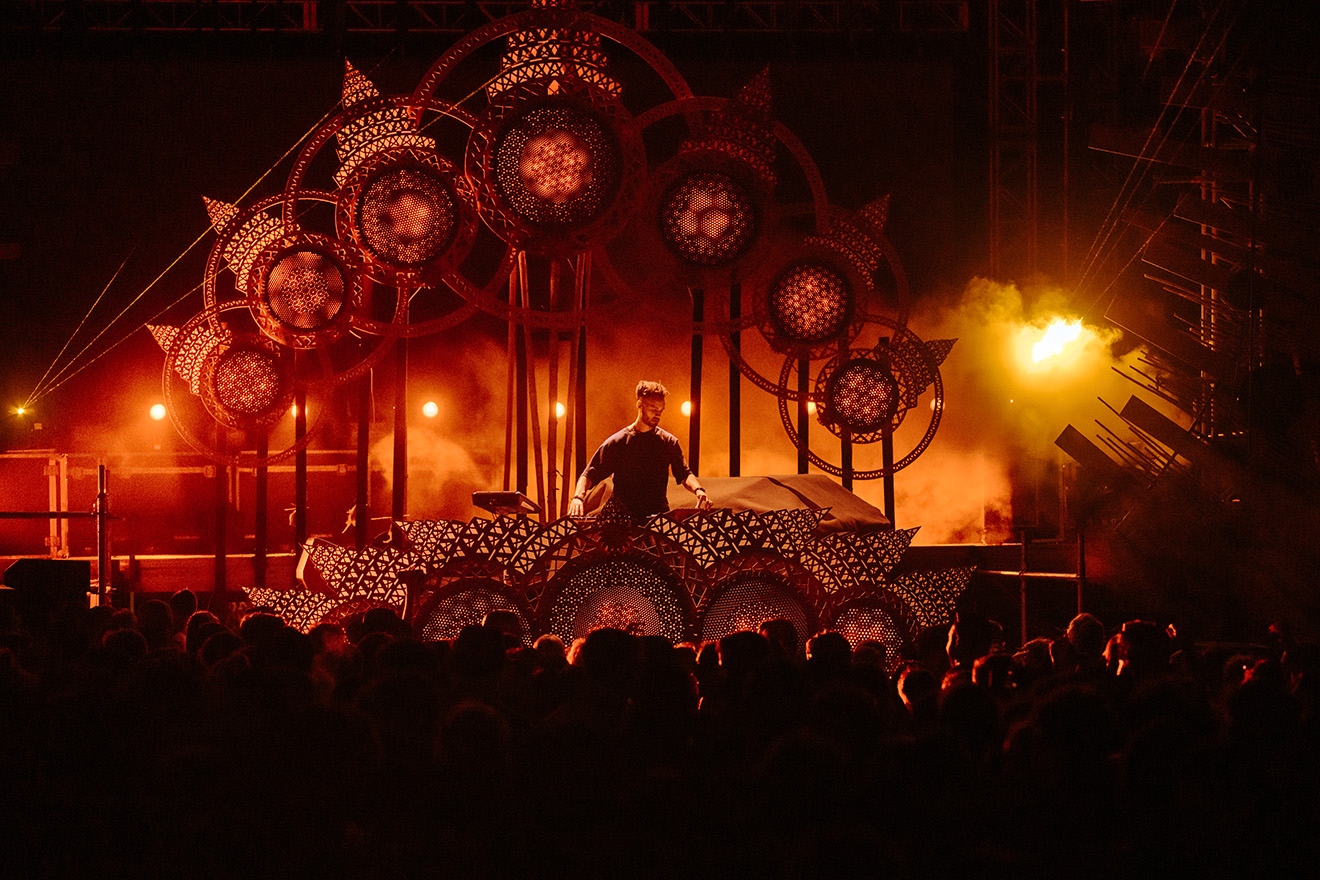 Papaya Playa Project presented the perfect setting for that combination. Initially opened in the '90s by Emilio Heredia, in 2011 a partnership with Design Hotels saw the German company's founder bring a team from Berlin club Bar 25, now Kater Blau, over to Mexico to develop the resort as a party destination alongside PPP’s incorporation of the local culture of wellness and spiritual healing. “Partying and wellness are connected, they’re a form of connection with yourself,” says PPP executive Raul Haro. “A lot of people requested to come to the wellness programme — it's cool that you can do both in the same window.”

The days on site are defined by a relaxed, easy-going atmosphere, as people chill on the beach, swim in the sea, explore local ruins, or take part in yoga sessions. Evenings are when the party ramps up. On Friday a trippy new stage that merges geometric shapes and hypnotic light displays is set up further down the beach to host a night of DJs. Jimeno, Sarah Kreis, AMÉMÉ, Eelke Kleijn, Cassian and Lee Burridge roll through sets that range from soothing to pumping as night draws in, while smoke and laser beams shoot through the dancing masses. 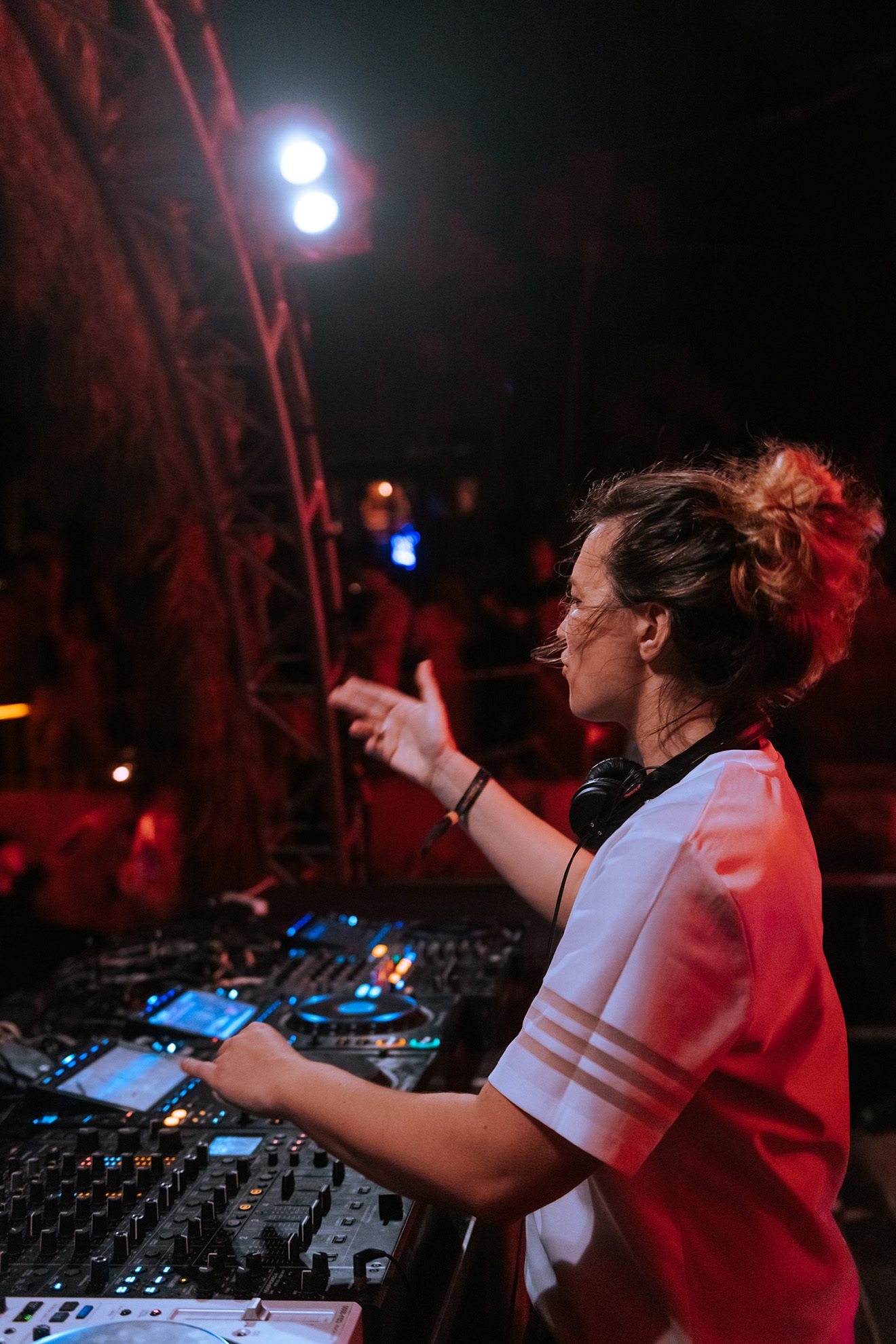 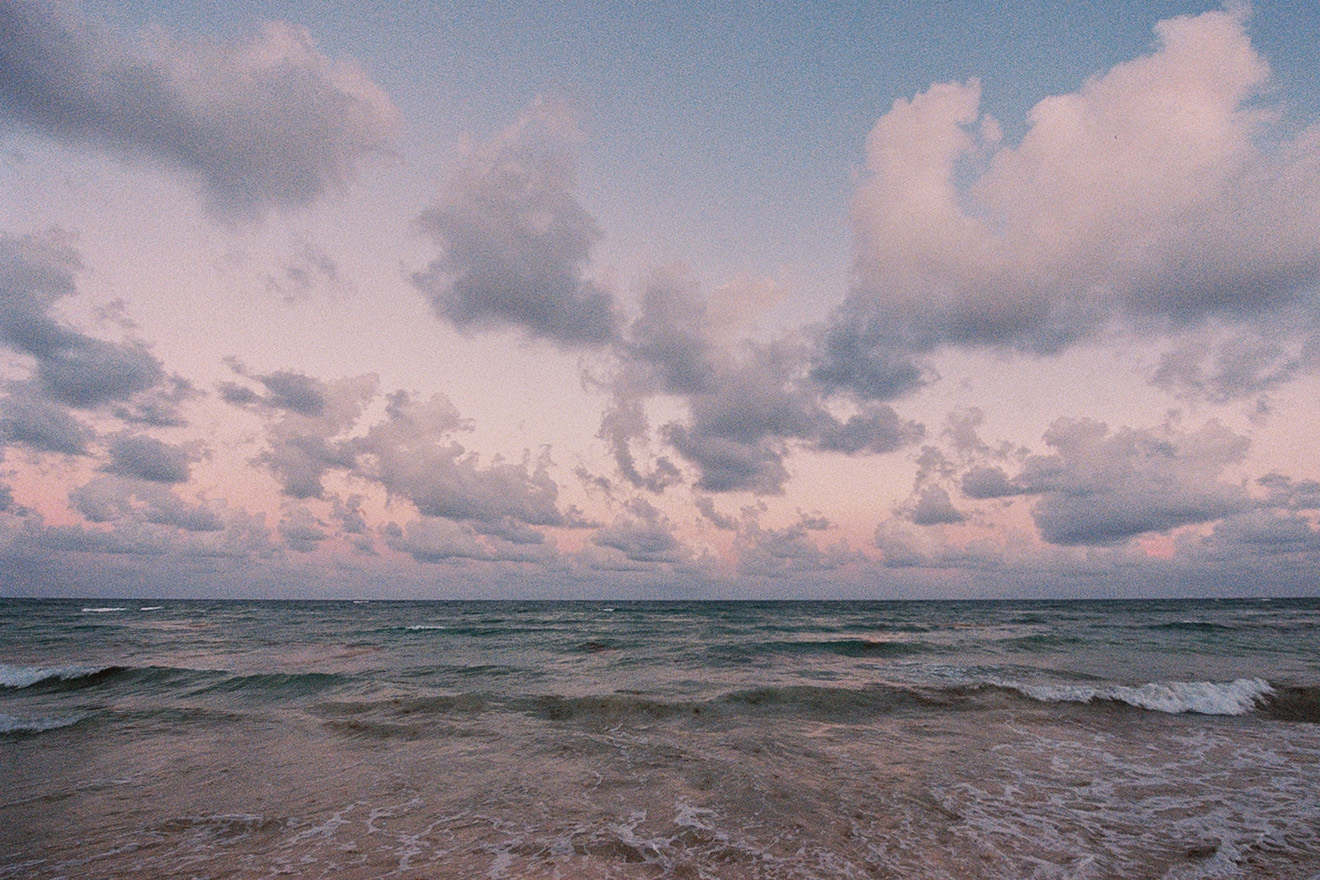 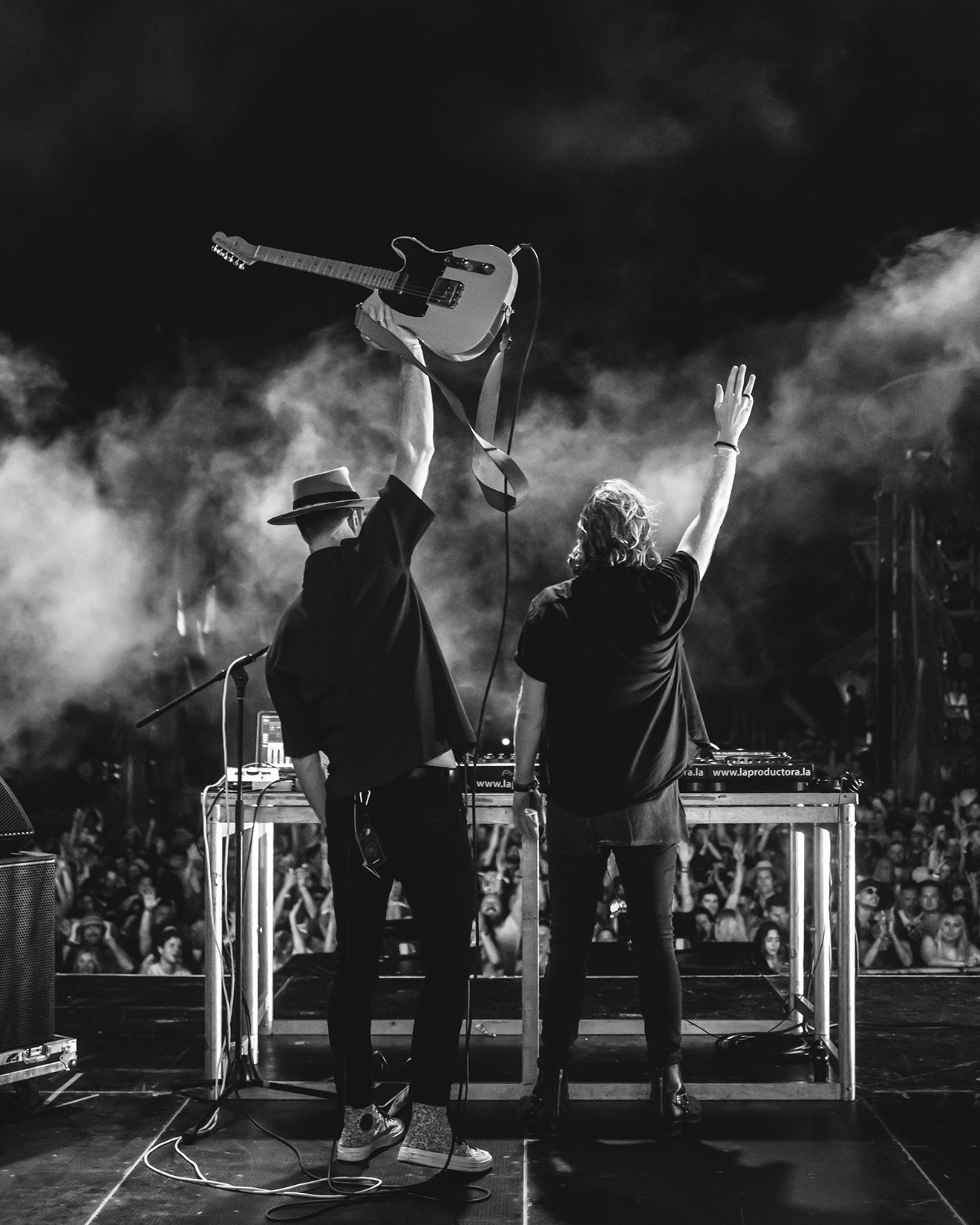 Saturday night is the big one: the music starts at the later time of 7:PM and rolls through to 5:30AM back on the main stage. There the likes of Sainte Vie, Bob Moses, Magdalena and RÜFÜS DU SOL’s Jon and James play correspondingly big sets of expansive house and electronica. As the sun begins to rise the sky conjures pinky-orange hues and the Caribbean sea glistens as it laps gently against the shore. An edit of Fatima Yamaha’s timeless ‘What’s A Girl To Do’ is drawn for as the euphoric accompaniment to this vista in a transcendent high point.

The closing day is devoted entirely to mind and body activities, including sound bath meditation and an ‘authenticity journey’, where a group of teachers guide a session aiming to inspire astral projection, accompanied by narration and ritualistic music. Wrapped in a blanket and lying down under the sky as the sun sets, it induces a state of deep relaxation that sees the 90 minutes pass quickly. While I don’t manage an out of body experience, it’s a restorative culmination to the weekend that has me feeling restored and ready to do it all again. Which, by popular demand, is exactly what RÜFÜS DU SOL have planned with a second sold-out weekend incoming. No doubt any future editions of Sundream, in Tulum or elsewhere, will draw equally high demand.