Standing onstage in front of roughly 10,000 people, swaying between red strobes and deep shadows, Maya Bouldry-Morrison, aka Octo Octa, is a sight to behold. She presides over her machines with a kinetic intensity, long hair swinging back and forth in time with the kick. During a live set, everything comes together in equilibrium, and Maya moves fluidly among the synths and their patches, coaxing forth exactly the right sounds. We come up out of a deep house odyssey into a bright melody backed with jiggling breaks, and the ecstasy – in the truest sense of the word – is palpable.

A year later, 4,000 miles away from Barcelona in a Greenpoint, Brooklyn hotel room, Maya looks back at her catalytic performance at the 25th iteration of Sónar Festival. “It was a moment where I was like, ‘Oh, I can do this in front of a lot of people!’” she exclaims. “I’d much rather be in a club with 150 people, that’s what I grew up on. But I walked away from it like, ‘That felt great! I feel good at what I do.’ It felt really wonderful.” She lets out a full-bodied laugh, as she does often when something is especially ridiculous, or as if to say, “Oh, life!” at the general goings-on of the world. You get the sense that she gets a kick out of herself and the novelty of it all, and why shouldn’t she?

The accomplished live musician and DJ is coming up on a ten-year career, her third full-length album, ‘Resonant Body’, the start of her own record label, T4T LUV NRG, and bookings from Berghain to Unsound to Dekmantel in 2019 alone. When she’s not touring, she lives in a cabin near the sea coast of New Hampshire with her two partners, her high school sweetheart Brooke and fellow DJ and producer Eris Drew. They’re isolated from the madness of a big city, but a car ride away from the Boston airport. In their spare time, they’ll go antiquing, or to the beach, or for walks in the woods around their house, or they’ll reseed their front yard because a brood of wild turkeys ripped it up. At night, they leave the windows open and listen to the frogs that live in the marsh behind their house.

“When I was giving [the new album] to my agent, I was like, ‘I’m just gonna warn you, this might be the happiest record I’ve written yet,’” Maya recalls, laughing again, as we sit on the couch eating doughnuts – chocolate frosted for her, blueberry glazed for Mixmag. Every now and then she takes a long, reflective puff on a purple-toned iridescent vape, which matches her long pink dress and the two crystal necklaces she’s wearing. Throughout our conversation, she speaks with the matter-of-fact demeanour of someone who doesn’t have time for anything but blunt honesty. “‘Resonant Body’ is very positive because of things in my life and how I’ve been feeling. I use music to access the emotional part of me and to realise myself and send messages that I care about,” she says. 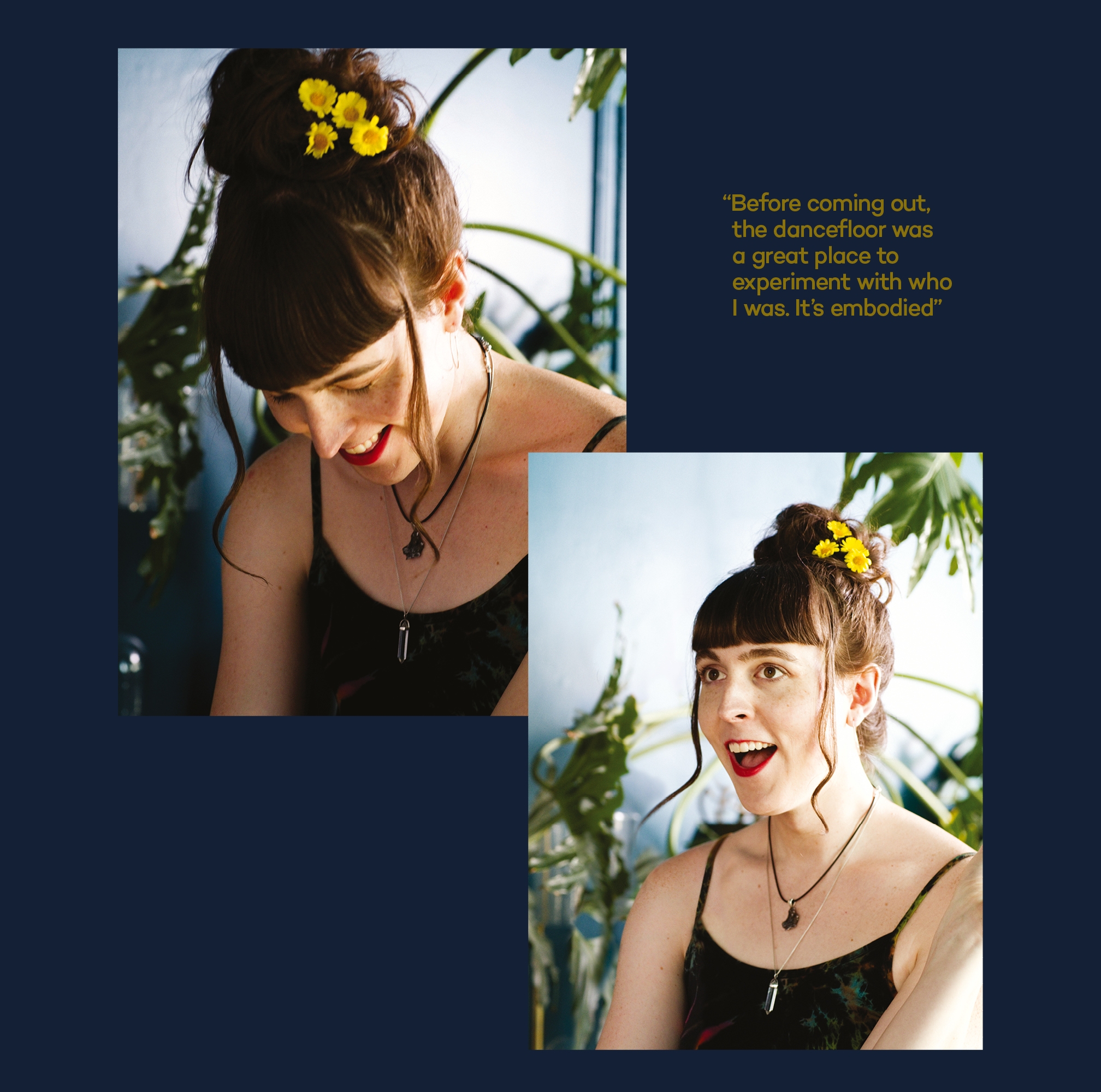 Maya isn’t shy about what specific messages she’s aiming to send with her work. After releasing a stream of emotive, melody-rich house compositions on the Los Angeles label 100% Silk, 2017’s ‘Where Are We Going?’ broke Octo Octa through to a wider audience. She credits this to the album being released on Honey Soundsystem’s label HNYTRX, as well as her newfound involvement in the queer dance scene after publicly coming out as trans in 2016. “I had wanted to [be a part of it] the whole time, but I was seen as a cis dude,” she says. “So much hiding!” She refers to 2013’s ‘Between Two Selves’ as a “coded message” about what she was grappling with at the time, while ‘Where Are We Going?’ was a nuanced and cathartic statement about the interpersonal processes that unfold after coming out.

“Whatever Maya is experiencing in her life at the moment becomes a part of the narrative of her music,” says Kellam Matthews, who co-founded the intimate Brooklyn party Frendzone with her. “It charges her music.”

As an example, on the last track on ‘Where Are We Going?’ you’ll hear Maya looping her own vocals into a murmured, mildly anxiety-inducing chorus: “Do you feel better?” It’s a frequent, frustrating and somewhat invasive question for a trans person to be asked. “It was something that was said to me all the time [after coming out],” Maya explains. “I obviously did something in my life to make myself feel better, you see that I’m a happier person or that I’m interacting in a different way, so asking me ‘do I feel better now?’... how are my actions not expressing that to you already? My transition happened the moment I knew who I was. I was at the end of the journey one second after I decided where I wanted to be.”

It would be hard to construe ‘Resonant Body’, out in September, as anything other than an expression of happiness. To start, it’s the second release on T4T LUV NRG, the label that Maya and Eris started in June as an outlet for their own music and mixtapes. The eight-track LP is a euphoric, largely upbeat collection of songs, influenced by Maya’s long-standing love of vocal house and more time spent approaching music with a DJ’s ear, rather than that of a live performer. Tracks like ‘Spin Girl Let’s Activate’ and ‘Ecstatic Beat’ are some of the most club-oriented music that Octo Octa has ever released, the former leading the charge with a jacking bassline and the latter an ambitious ode to breaks. It is music that unashamedly centres the moving, dancing body and its pleasure.

“If you’re not a ‘great dancer’, what does that even mean?” Maya asks. “If you’re expressing with your body in any way, you’re good! The dancefloor can be loud and dark, and for me, before coming out, it was a great place to go out and experiment with who I was and how I wanted to interact with the world. It’s embodied.”

With ‘Resonant Body’ especially, it’s clear that her music is – and has been – informed by understanding the power that can be found on the dancefloor, from crying in the club with Eris and Cleveland’s In Training crew a few years ago on a trip to the Midwest, to clubbing in New York for the first time when she moved to the city after college. In high school, before she had gone to any clubs, her friend would DJ jock jams at homecoming, and she would manage to sneak in a drum ’n’ bass record at the end of the night as everyone was leaving.

Drum ’n’ bass was teenage Maya’s punk rock. Though it isn’t really the standard coming-of-age genre for someone growing up in the United States (specifically Concord, New Hampshire), anything was possible by way of the Internet. At 13, she remembers, iTunes had launched their radio feature, which had a station called Bassdrive. “I was like, what’s ‘drum… and… bass?’” She chuckles. “And I clicked on it, and my little head exploded.” She tapped into the immediate viscerality that her friends had found in punk, and went on to explore the IDM of Warp and Rephlex, then breakcore (“harder and faster, more splattery… everything everywhere, shit-mad”). 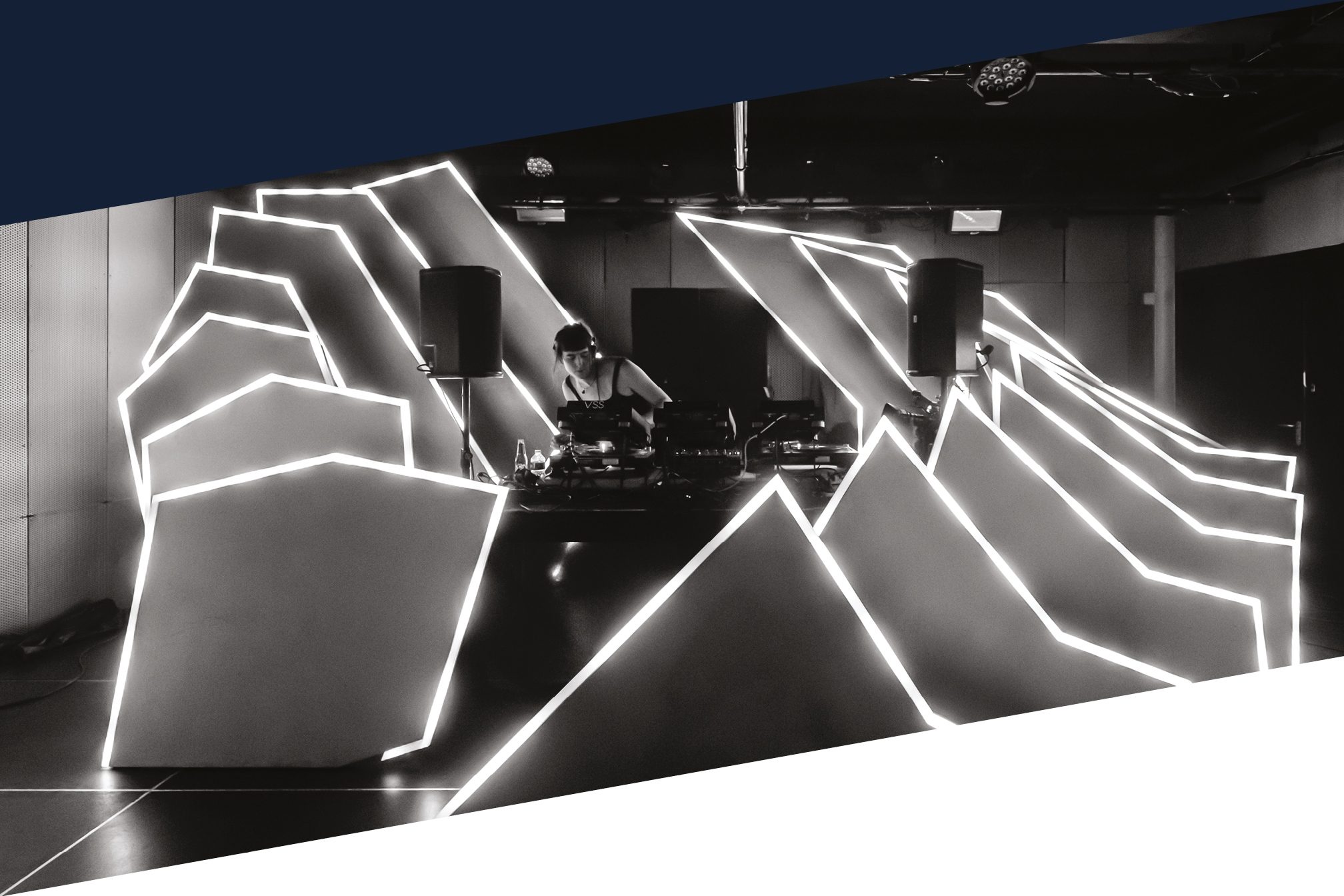 She began an instant love affair with the harder, more crazily syncopated sounds of electronic music. Maya got her first turntables – two Numark belt drives and a two-channel mixer – and began to acquire gear with whatever cash she had. Seeing her two friends play a live electronic set in another friend’s basement (the last act after three punk bands, of course) was a major turning point. “They brought a computer and a MicroKorg, maybe a Roland MC307. I didn’t know that we could make electronic music,” she explains. At the weekends, she and her friends would go to Salvation Army and Goodwill to find kids’ toys to circuit-bend (which would inevitably break in two weeks), and afterwards, it was Magic: The Gathering every Friday night and Dungeons & Dragons every Saturday.

“The whole party went up,” she reminisces, exhaling a thick stream of vapour and shaking her head as if she still can’t quite believe what happened. “Everyone started dancing a lot, and I was like, ‘That’s what I’ve been looking for this entire time!’” She pauses. “I love drum ’n’ bass because it engages my reptile brain at a very base level. House music does that – and it also engages my heart.” After college, she moved to Brooklyn with Brooke and produced and grew as a DJ there, putting in time playing “small shows to nobody, which is how it’s supposed to be,” throwing Frendzone parties, and touring when she was able. 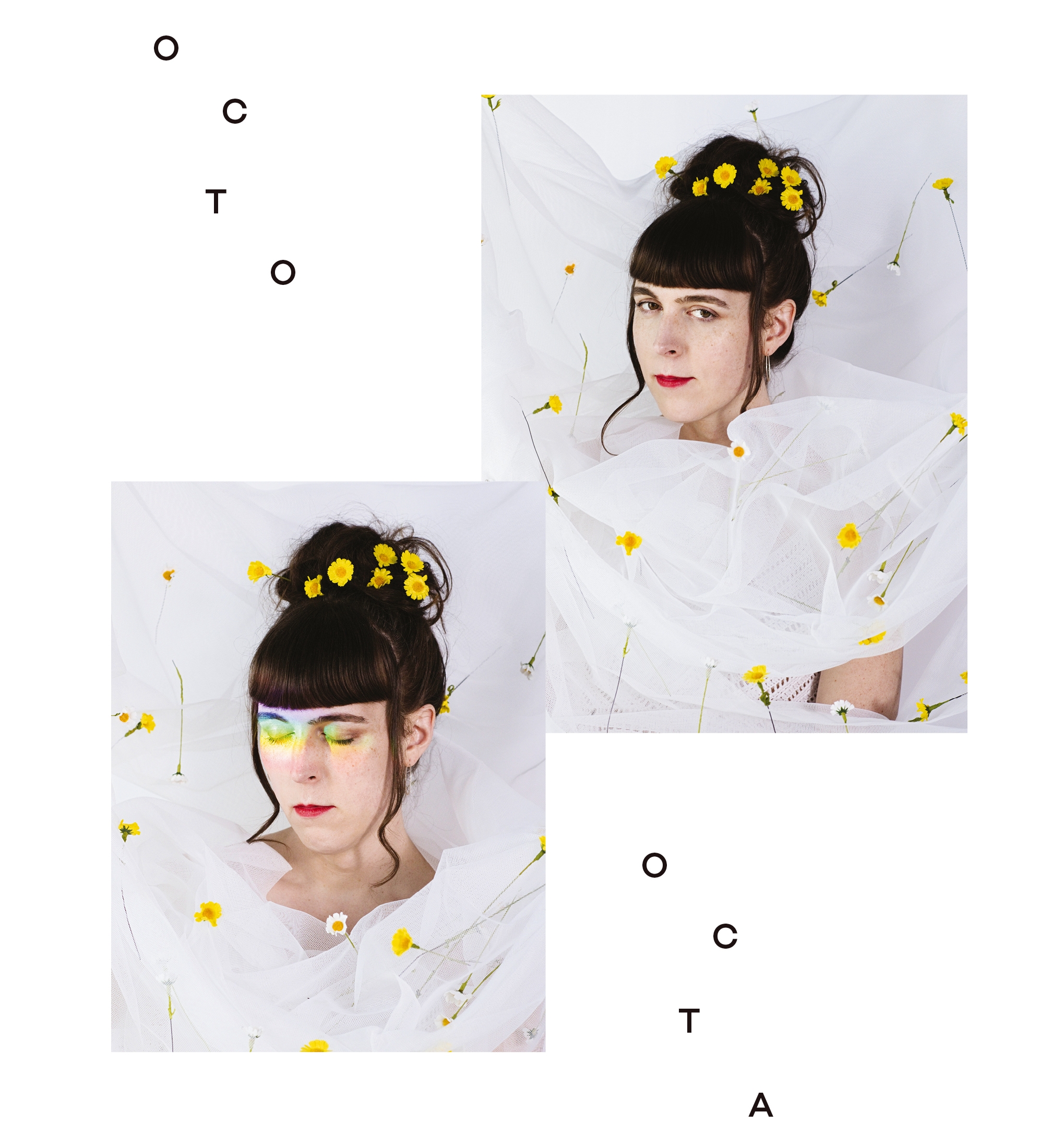 “For me, the highest value in this insane world of electronic music is truthfulness to self and however that manifests itself through the creative process,” says Juan. “I’ve watched Maya really come into her own as an artist by remaining true to herself as a human being and by putting in absolute dedication to the art forms of DJing and production.”

Maya and Brooke lived in New York for seven years and ended up moving back to New Hampshire in 2017; Eris moved in in May. It isn’t an exaggeration to say that the house is a magical space. The synthesizers in Maya’s loft studio, and Eris’s downstairs, literally resonate throughout the structure, and fill it, she says, with an energy that intensely connects the woods, the space, and its inhabitants. “What can happen in that house felt very right for what I was trying to do with the record,” Maya says. “It just felt like it had to happen there.”

“[‘Resonant Body’] is more connected to nature than [Maya’s] prior work and also more spiritual,” Eris says. “This album asks no questions. The message of physical embodiment, transcendent love and communal togetherness in the music is demonstrative. The magic it contains manifests to anyone willing to open their heart and listen.”

The penultimate track on the record, ‘My Body Is Powerful’, is a calm, ambient moment that unfolds piece by piece, with bird calls reverberating against gentle melodies and ethereal chimes. The sample came from a record Maya found in a Concord antique store, with a message inside that alluded to, of all things, a polyamorous experience – “someone was like, ‘Thank you Deb and Linda for the wonderful night in the cabin, it’s something I’ll never forget that we shared together,’” she recollects, smiling cheekily. Some things are simply meant to be.

Given Maya’s penchant for sending messages out into the world, we’d hazard a guess that it’s no coincidence her first single was called ‘Let Me See You’, and the centerpiece of ‘Resonant Body’ is called ‘Can You See Me’. The new song is a warm, glowing, and highly danceable T4T (trans-for-trans) anthem with a sample that soothes and reassures: “I know exactly how you feel!” Sometimes that’s all you need to hear. It’s hard not to become part of something bigger than yourself when you’re dancing to Octo Octa; through her productions and her DJing we can imagine, if even for a moment, the best possible world for ourselves.

Octo Octa in The Lab NYC
The Cover Mix: Octo Octa
The 30 best vocal house anthems ever
Get the best of Mixmag direct to your Facebook DMs