"It's strange because Glastonbury is huge; over 200,000 people are walking around", Matthew Phillip, Notting Hill Carnival's Chief Executive Officer notes. "But we're used to manoeuvring around millions — to us, it was like empty streets," he laughs. Kicking off on the festival's second day (June 23), Notting Hill Carnival sent a mini version of its colourful parade around the Somerset farm as part of a collaboration with Block9 — utilising a 100% battery-powered float, a steel band, DJs and of course dancers dressed-to-the-nines. It's odd to see the colourful feathered costumes moving against the deliberately muted greys of Block9 East's industrial stage. Still, as soon as hundreds of smiling (and a little surprised) Glasto-goers approach the truck doing laps of the field on Thursday, it's like they've always been here.

The collaboration between the West London street party and the festival's South East Corner institution marks the first time Notting Hill Carnival has had an official presence in Worthy Farm — a "no brainer" as far as Phillip is concerned, who'd been in talks with Block9 founders Gideon Berger and Stephen Gallagher since 2020. "Why hadn't we done this before? That's what I was thinking. It just all fit so naturally." The partnership came about through a shared British Arts Council contact, initially with the cancelled Glastonbury 2020 in mind. "It just seemed like the right thing to do," notes Gideon, "we wanted to look at how two titans of UK culture might be able to work together." 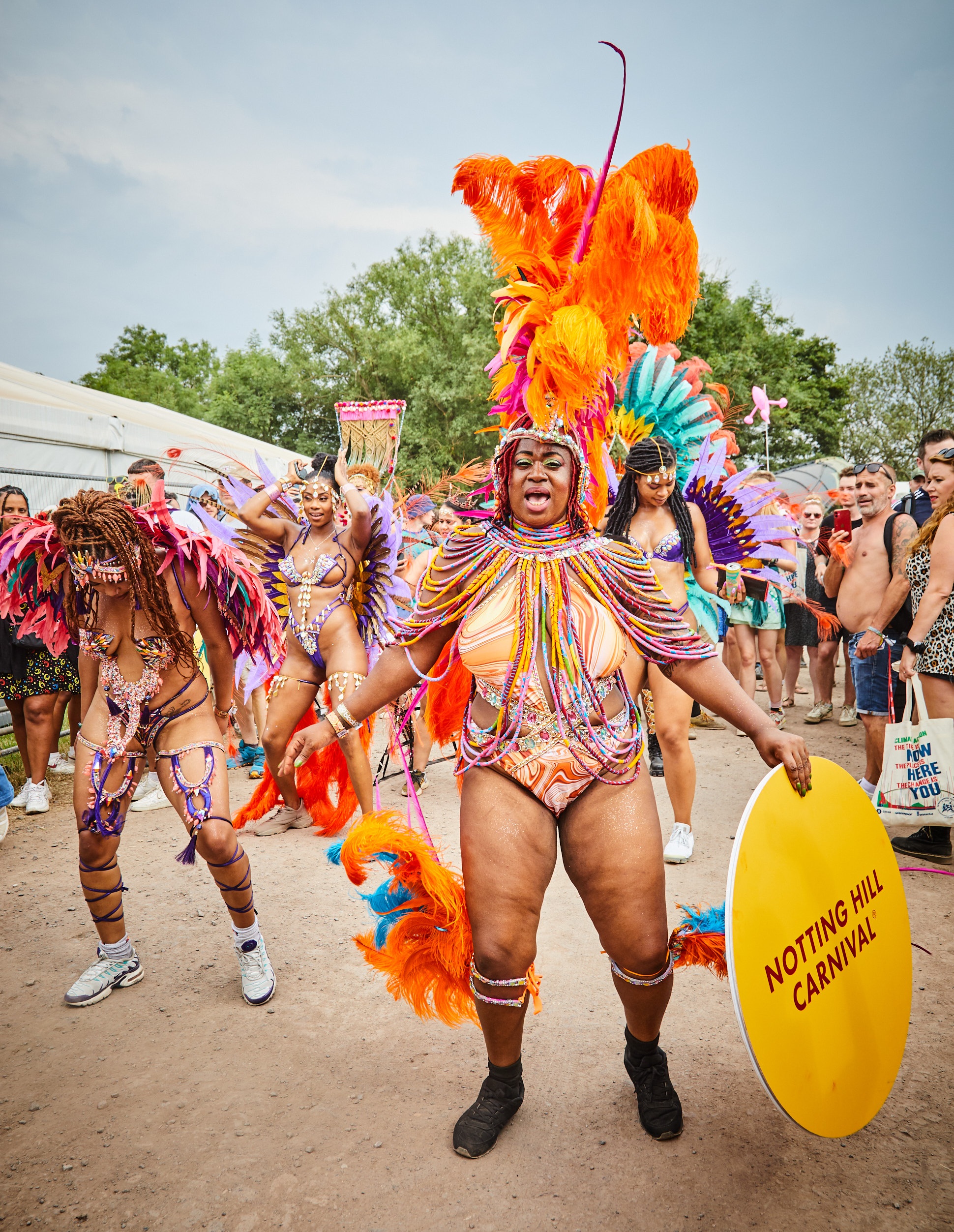 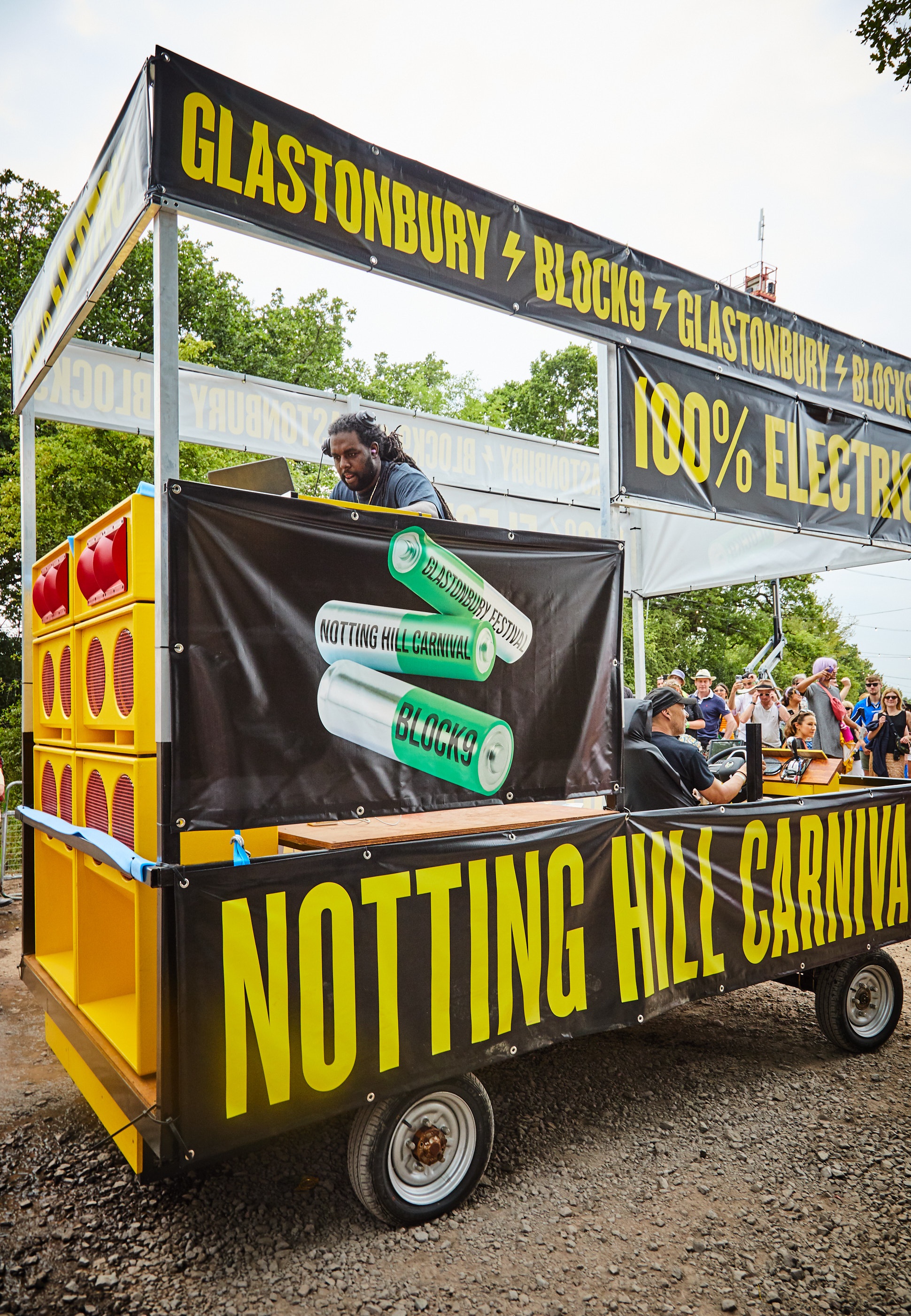 It's an exciting time for both camps to be once again organising a large-scale, all-encompassing event — for the first time in three years. "It feels so good to be off Zoom and in the real world," comments Gideon. "The effect of having non-stop incredible music playing on these giant soundsystems for five days is so good for the body and soul — it should be prescribed on the NHS."

Read this next: DIY defiance: Genosys Sound System brought the spirit of 90s rave to Glastonbury

The Notting Hill Carnival x Block9 programming is a proverbial teaser trailer for the return of the main event across the August bank holiday this year. There's a procession featuring high-energy soca from resident road DJ Nassen, accompanied by dancers (formed from a mixture of different troops, regular to Carnival), masqueraders and moko jumbies — all rounded off with a cooldown session with the stars of the show, current National Panorama champions: the Mangrove Steelband. However, it's less of a cooldown and more of a cacophony — as the DJ continues to play on the float soundsystem and the dancers, moko jumbies and various elements of the NHC team linger around and party into the night. 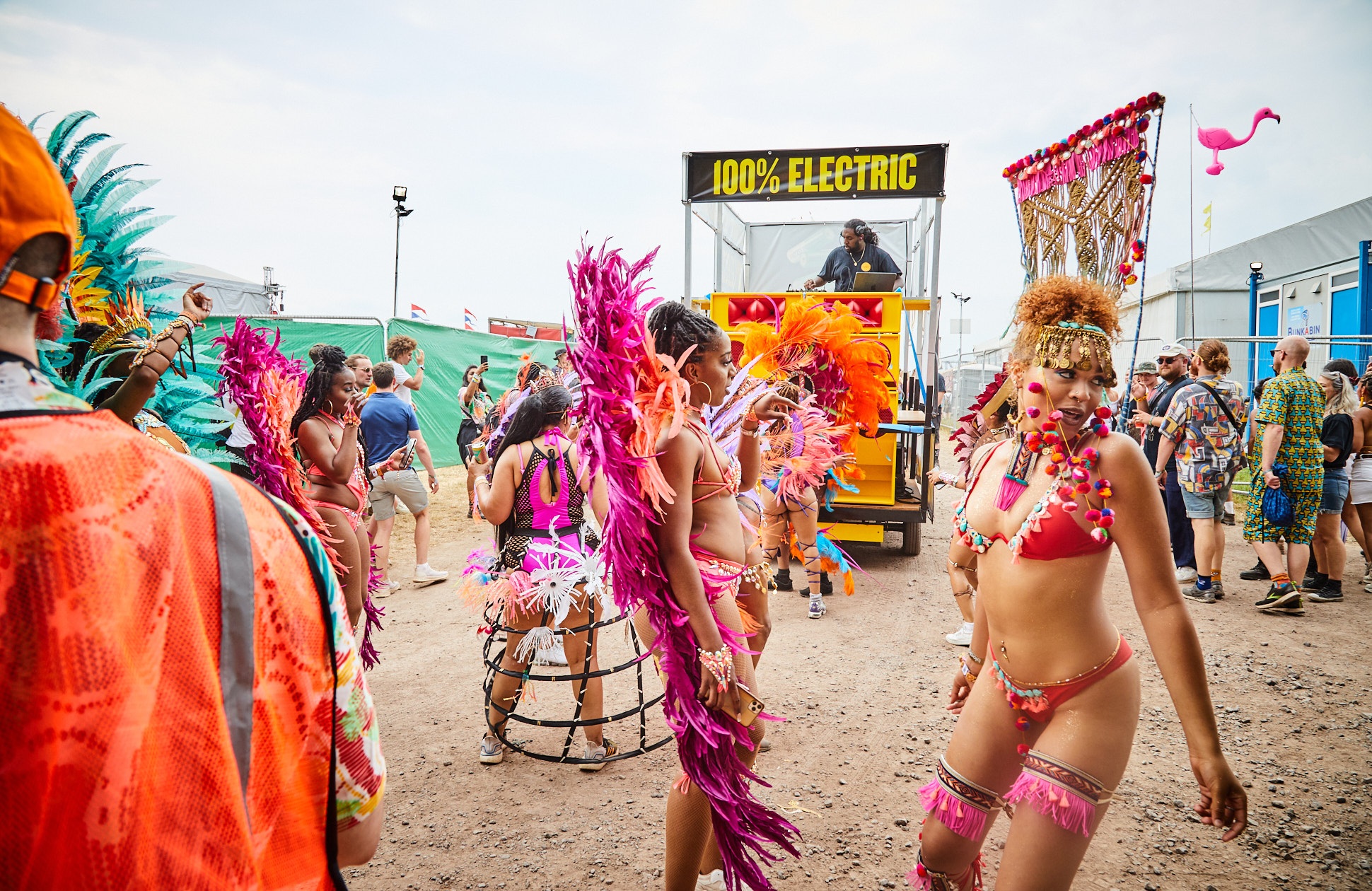 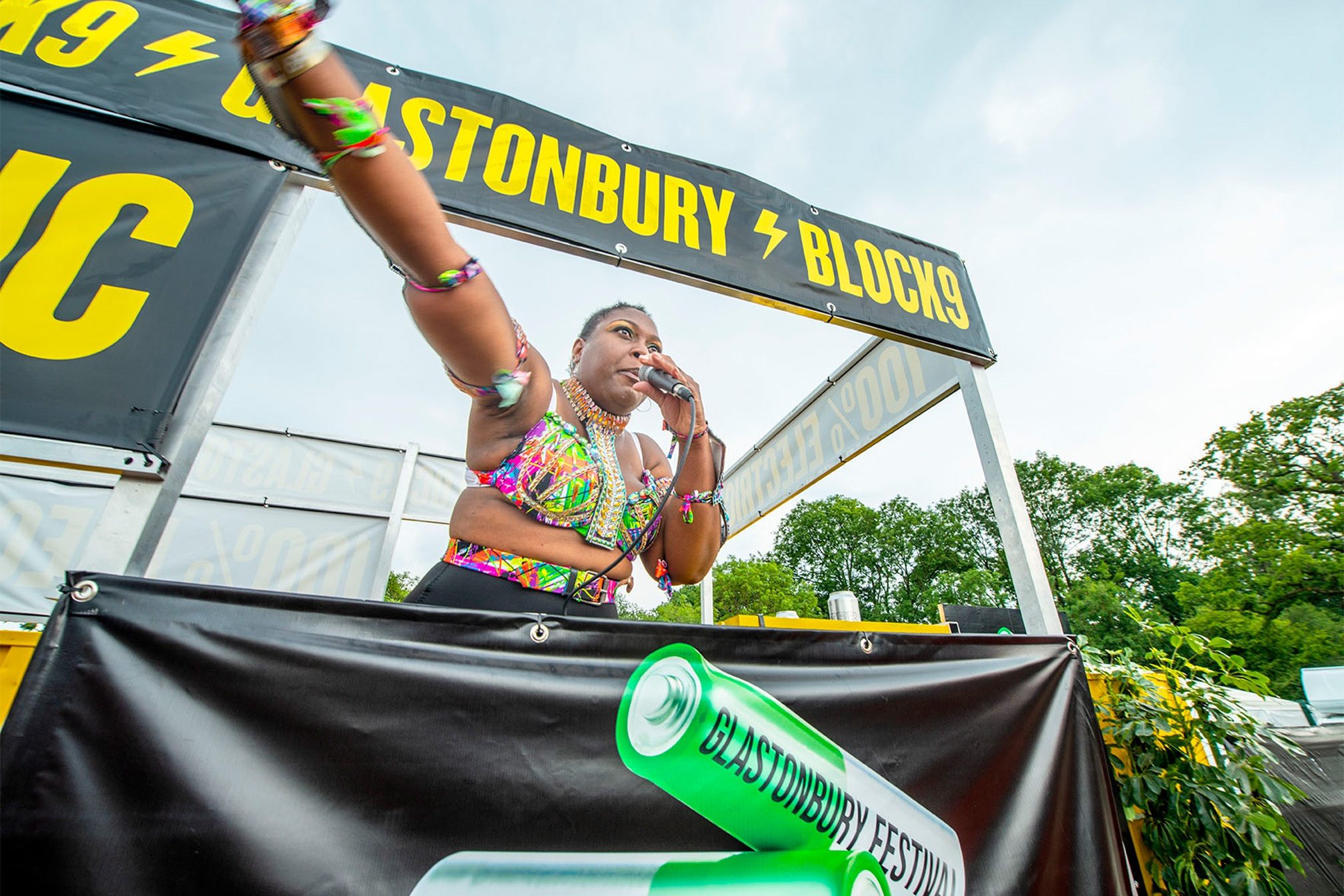 Alongside this, costume designers hold workshops outside the Park Stage to instruct the curious delegations on how to craft headpieces. It's an emotional sight for Phillips: "You see children who have attended the workshops spotting the float and then running to join in dancing around it. It's scratching the surface of what Carnival Arts can do."

"We had a massive crowd waiting for us when we arrived at Block9 on Thursday, so much audience participation. Since then, we've had so many comments saying, 'I didn't really know what Carnival is about.' That's why this has been so successful — Carnival was always about participating rather than spectating, and everyone here is willing and keen to learn. We wanted to bring a little flavour to Glastonbury; parading is what we do."

Read this next: Listen to two fiery sets from Afrodeutsche and Ishmael Ensemble at Glastonbury's Arcadia

For teams behind Notting Hill Carnival and Block9, there's an obvious synergy between the street party and Glastonbury Festival. Both have a somewhat atypical approach to organising on a large scale, opting to give free rein to performers, artists, volunteers and stages that come under their umbrella to maintain a community spirit and a loyal set of dedicated creatives, diligently working to make the events the very best they can be year-on-year. The "for the people, by the people" approach, is perhaps what has placed them as the country's most popular gatherings. "Gideon and Steve can programme Glastonbury however they see fit, as long as they meet loose criteria," notes Matthew. 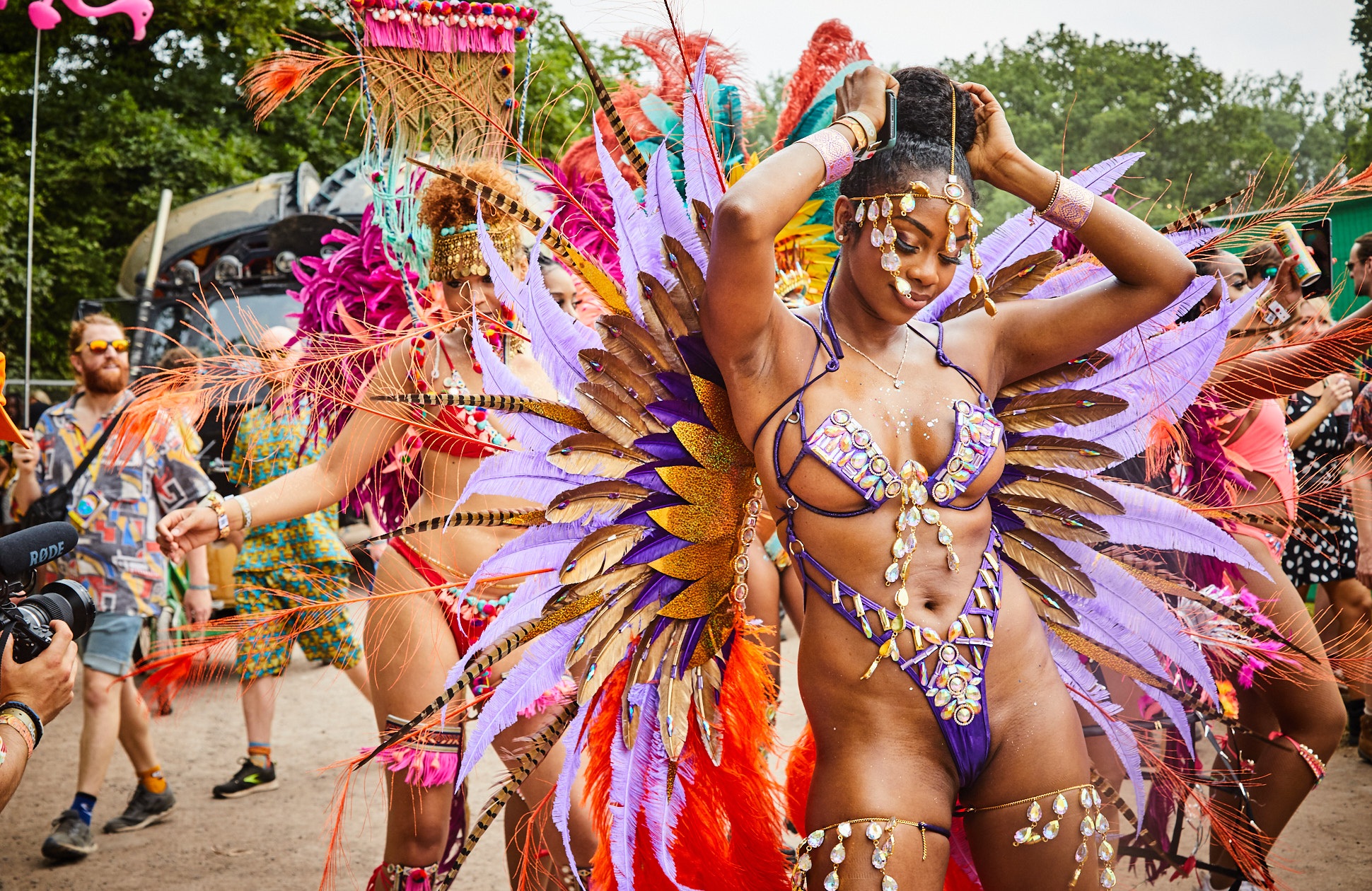 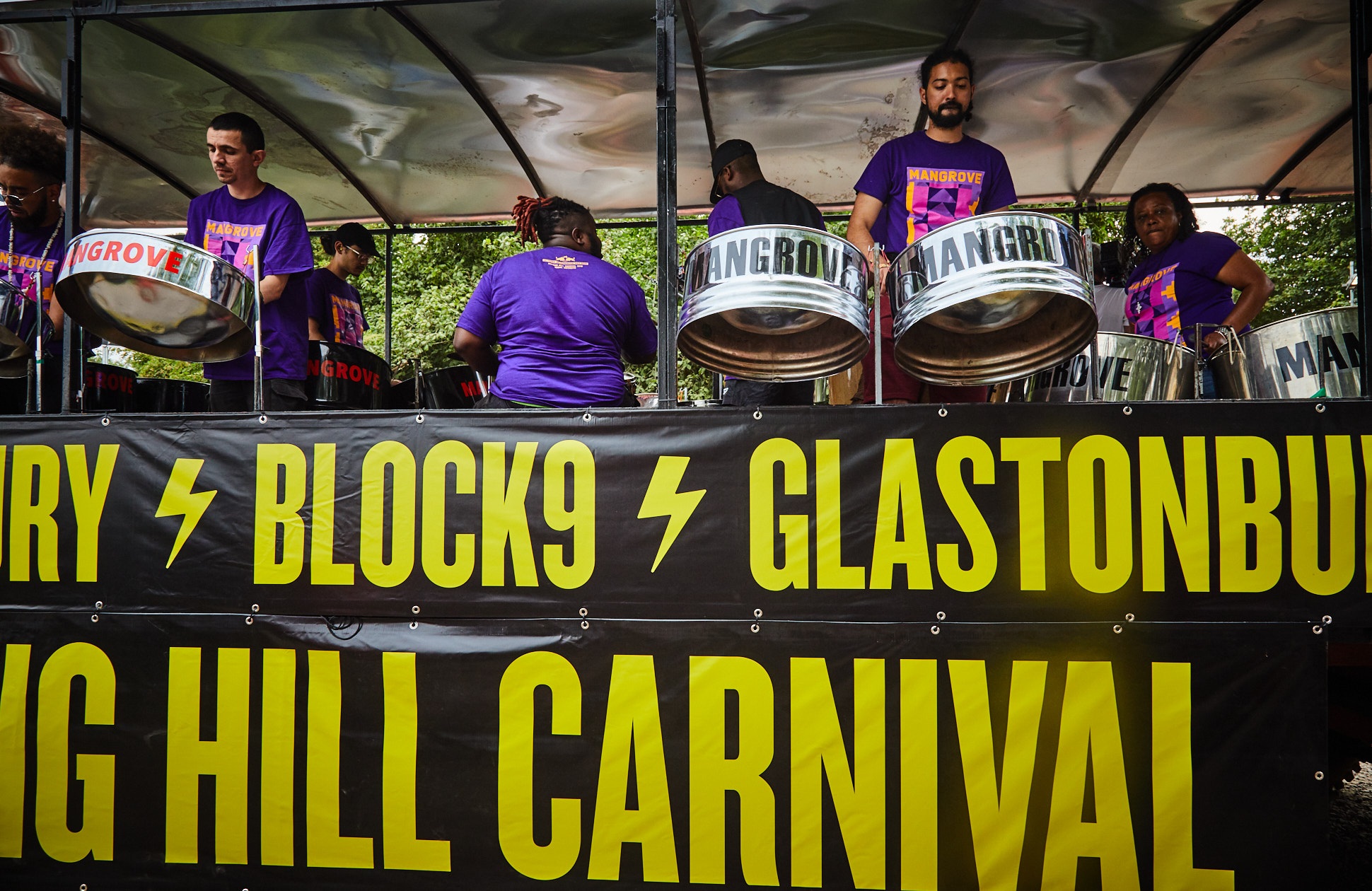 "We're the same; I really noticed how similar Glastonbury and Notting Hill are this year. We give independence to our artists and contributors — the costume bands, the steel bands, the DJs, everyone is given free rein to play and organise however they like; the only thing we ask is that there's no hate speech, there's no offensive language."

Read this next: There's a petition to get Notting Hill Carnival UNESCO Heritage status

Similarly, neither is run for profit. Notting Hill Carnival is a free event and therefore doesn't make any money from attendees as an organisation; Glastonbury sells tickets — but donates all profits to its Worthy Causes: Oxfam, Greenpeace and Water Aid. Both provide employment for their local community and the rest of the country, not just in the days running up to the event but much of the year. Gideon notes that the shared cultural values of Notting Hill Carnival and Glastonbury hit him during the festival: "It was such a natural fit. The politics of community and music's central role in the UK's rich, vibrant cultural landscape are all central aspects of the philosophies of Block9, Glastonbury and Notting Hill Carnival." 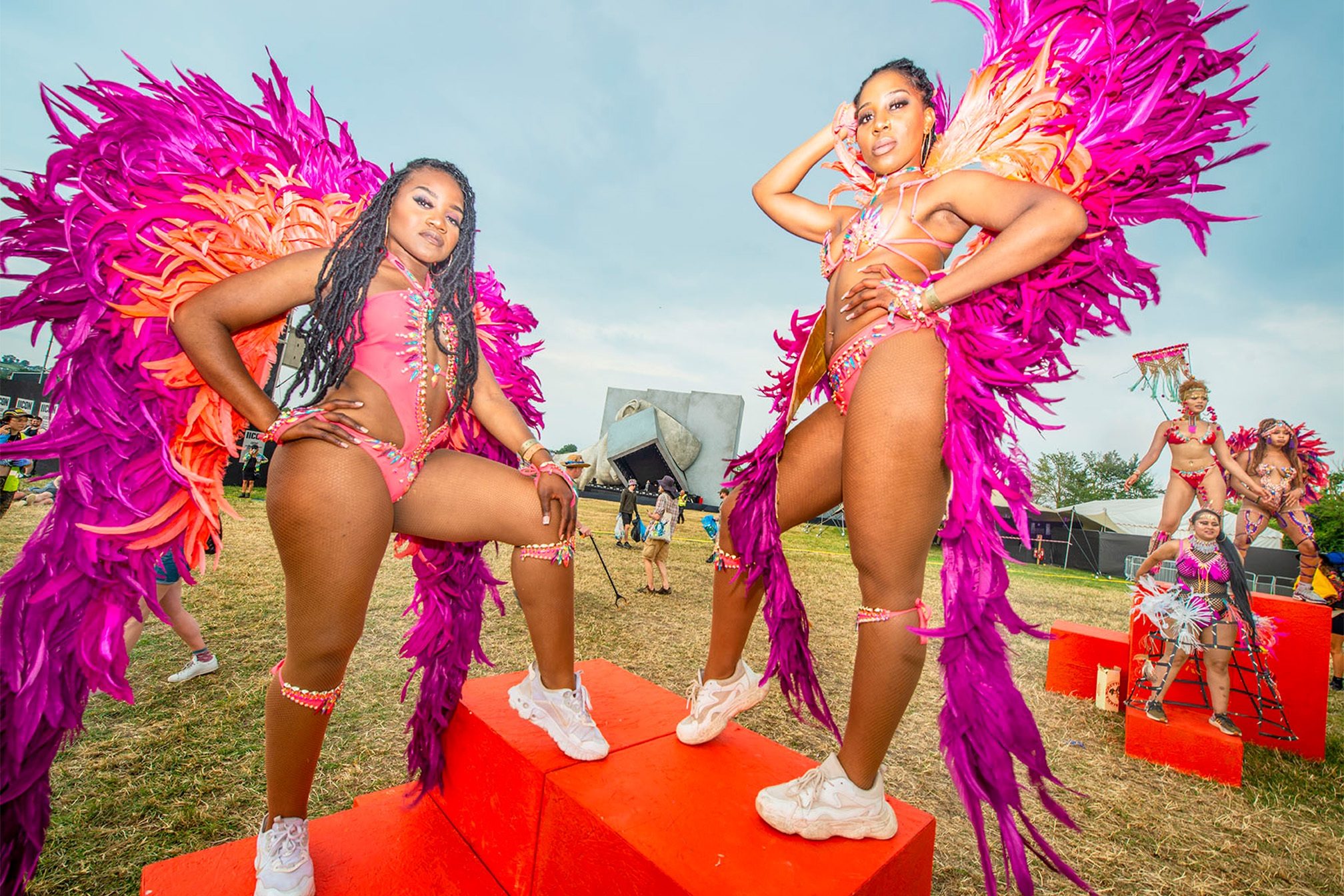 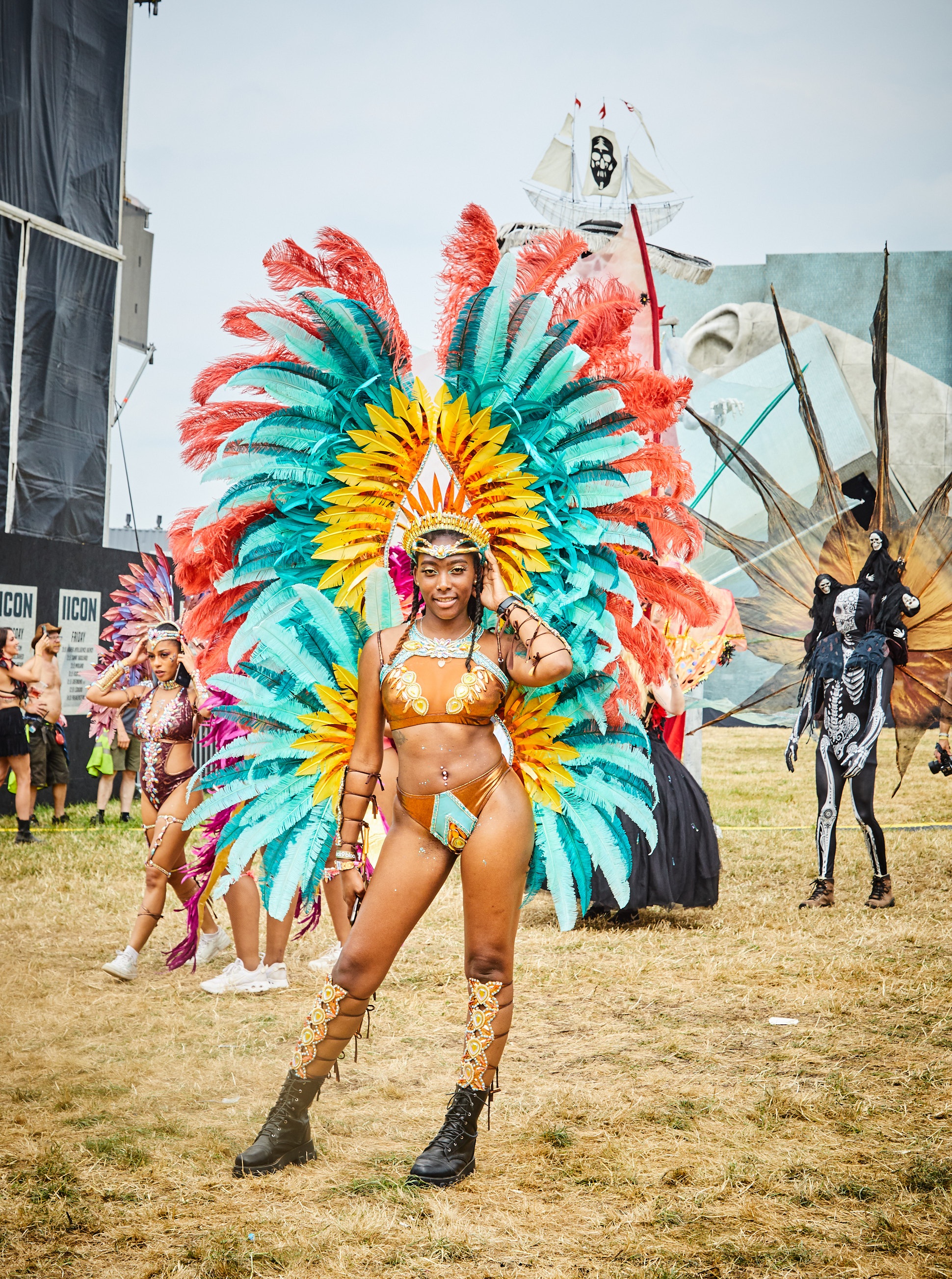 Both teams seem to be anticipating another collaboration next year, with Matthew sharing that after 2022's "trial run", he has sights on "a full carnival village" for next year's festival. "Imagine the food, the art, the performances. We could create something special." But for now, with just a month to go until Notting Hill Carnival is expected to welcome over two million people to the streets of West London, the Carnival camp may be slightly occupied — for the next few weeks at least.

Upon reflection post-festival, we catch up with Gideon to talk about the shared values and plans of the two events. "We have a connection with Carnival — they really invented this concept. Days of music, days of celebration, days of hedonism. It's so good for your mental health, your community and humanity."