For a long time, jazz seemed about as cool as a musical Christmas card. Perhaps we can lay the blame squarely at Jamie Cullum and Pizza Express’s Jazz Nights. But then, something changed. Flying Lotus and Thundercat started making jazz-indebted, forward-facing albums and everyone remembered that Miles Davis was basically the sickest individual to ever walk the planet. A fertile, diverse and experimental jazz scene has sprung up in the UK. And there’s one man dressing it. Menswear designer Nicholas Daley launched his label in 2015 and since then, has dressed the likes of Yussef Dayes, Mansur Brown, Alfa Mist and Shabaka Hutchings. Ahead of his spring/summer ’20 ASTRO BLACK collection that draws inspiration from legendary afro-futurist group Sun-Ra Arkestra, we sat down with him to find out more.

How did you end up in the fashion industry?

Growing up in Leicester, I worked at a streetwear store called WellGosh that’s still there now and sells brands like Stussy, Fred Perry and all the other big streetwear labels. That was my first real introduction into the world of fashion: working on the shop floor and being a part of the streetwear subculture.

My family’s history and heritage certainly led me that way too, though. Dad’s West Indian culture always meant him, my uncles and cousins always wore their Sunday best and would look very dapper in either two or three-piece suits. They wore Clarks Originals and they always had to be polished.

As I grew older I wanted to take that further, and I applied to study at Central Saint Martins. I managed to get onto their BA menswear fashion design course and study at the same university as Alexander McQueen, which was special to me.

I read that your parents owned a reggae club in Scotland back in the late 70s...

They ran a place called The Reggae Klub from about 1978 to 1982. They were in their mid-20s at the time, and British roots reggae music didn’t really have many spaces in Scotland. The Reggae Klub kind of represented a home for it, and for other genres of music that didn’t have a fixed abode.When I told them I wanted to make my SS19 SLYGO collection a homage to The Reggae Klub, they couldn’t understand why. They couldn’t see why I wanted to use an old T-shirt as inspiration, or why I was rummaging around their old Reggae Klub stuff looking for inspiration. In the end, I reproduced The Reggae Klub T-Shirt 2.0 which became a key piece in the collection. That was special, because my parents never really made any money out of anything they did with the club; they did it for the love of it, and because no one else was doing it. It’s that passion and love for something that’s really inspired me. 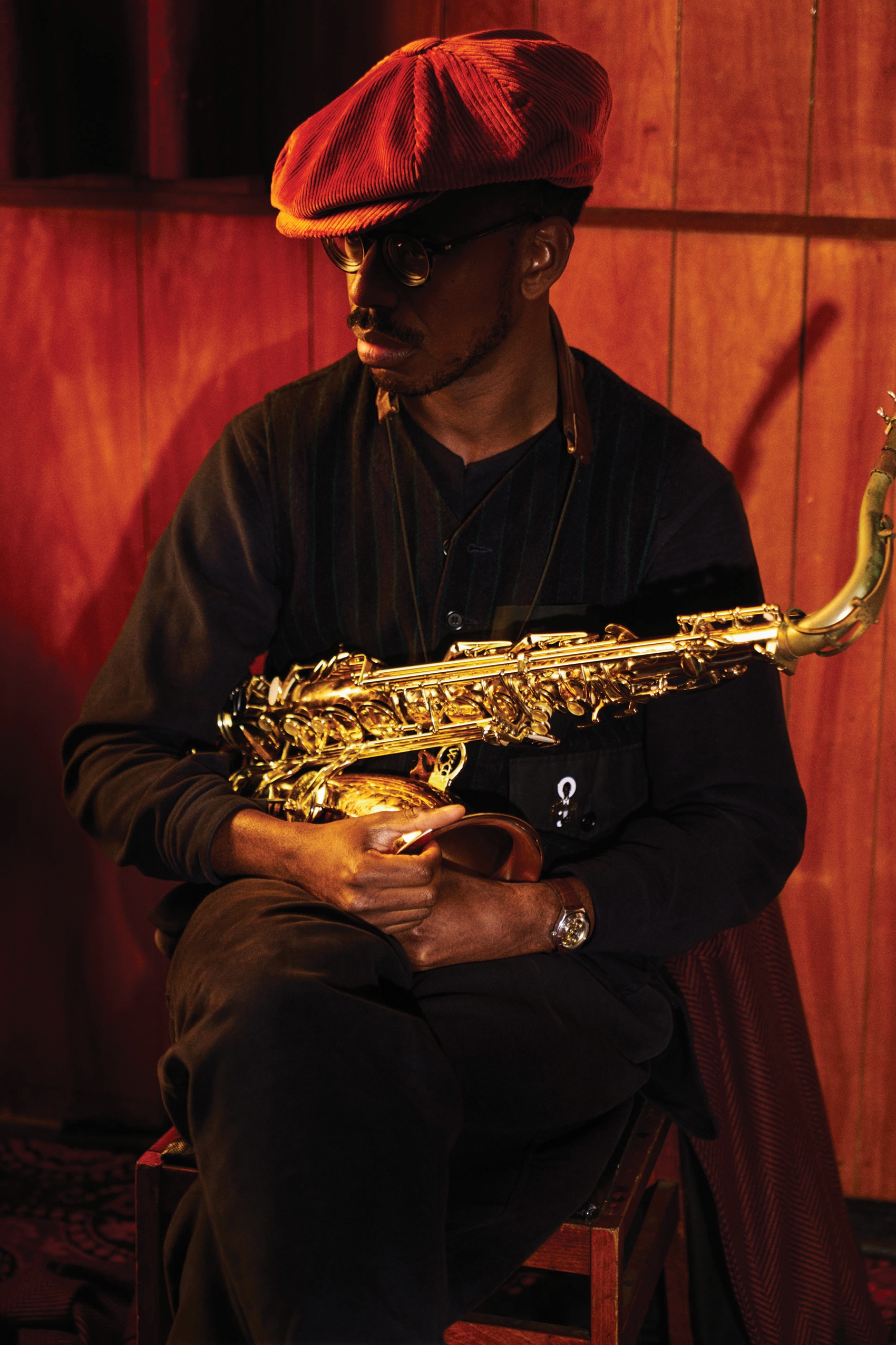 Your work has become synonymous with the scene. How has jazz inspired you?

It’s a funny one, because my parents were never really big into jazz. I was first introduced to it through my love of hip hop, and then listening to Jazzmataz and The Roots. Then I began listening to people like Miles Davis and John Coltrane, and since living in London, I’ve really connected with its jazz scene. I wanted to embrace it more within my shows as it’s something that really interests me. The movement and excitement around UK jazz is something I love at the moment.

What’s it like to dress particular people in the jazz scene – Shabaka Hutchings, for example?

Styling Shabaka was a personal highlight. He’s one of the best saxophone players of our generation and connecting with him and his aesthetics is an amazing feeling. When I styled his band Sons Of Kemet for the Mercury Awards last year it was great to see them perform in the clothing I’d chosen, and everything coming together between our creative worlds – Vogue even mentioned they were best dressed at the awards night! 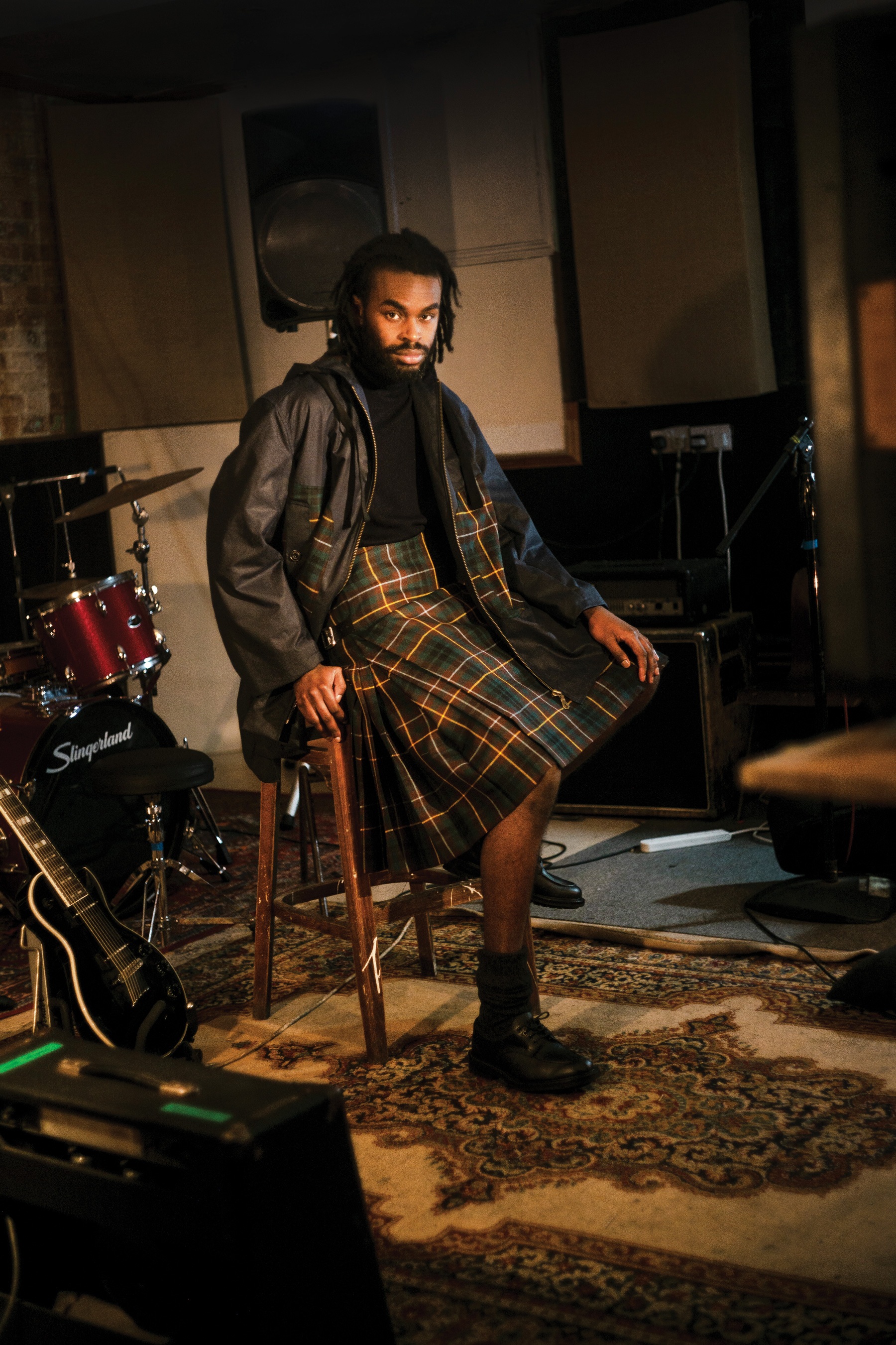 How do you think jazz itself has influenced your design process?

The Red Clay collection I did for AW18 was inspired by a Freddie Hubbard album that has this amazing rising sun image in a deep, rich, burnt orange colour that I really liked. I also created some tweed in Scotland that was inspired by some Blue Note record album sleeves and what some of the musicians on them were wearing; the styles and the cut of the jackets the older jazz musicians were wearing, the raincoats, the baker boy hats and the shoes. I take inspiration from styles I like from all different walks of jazz and intertwine them into my work.

What else inspires you?

I’m half Scottish and it’s something I’m very proud of – it keeps mum happy, too! That’s inspired me a lot, whether I’m designing kilts in Motherwell or developing tweeds in Hawick.

Who’s the most stylish jazz musician of all time?

I’d have to say Miles Davis. He adapted and changed his style throughout his career with various cuts and fabrics – he was very much at the forefront of jazz fashion. To be honest, all of the jazz legends dressed well. They all had their own individual styles.