The stage at Kentish Town Forum is decked out like a weed factory: plants (presumably fake) tower in clusters, a skunk jungle flourishing under hydroponic strip lights. Birmingham rapper and man of the moment Mist emerges as a haze of dry ice rolls across the stage. Resplendent in a dazzling white trackie, he inspects his plants appraisingly with all the calm assurance of a master of his domain. His producer and DJ Steel Banglez drops the buzzing opening bassline of ‘Hot Property’. Mist delivers the first lines and the crowd shout them back: “Another level, next step”. It’s a mantra that has run through Mist’s meteoric ascent.

“I’m trying to bring my visuals to life; in a way I’m looking to give people a real experience when they come to my shows,” he tells us over the phone the day before the show, in between taking drags on what he’s calling “happy cigarettes”. This visual flamboyance has built his brand – but crucially, it hasn’t overshadowed his own talent. Beneath the weighty video budgets and ostentatious lifestyle he’s aware that the core of his appeal is the fact that the stories he tells are relatable. 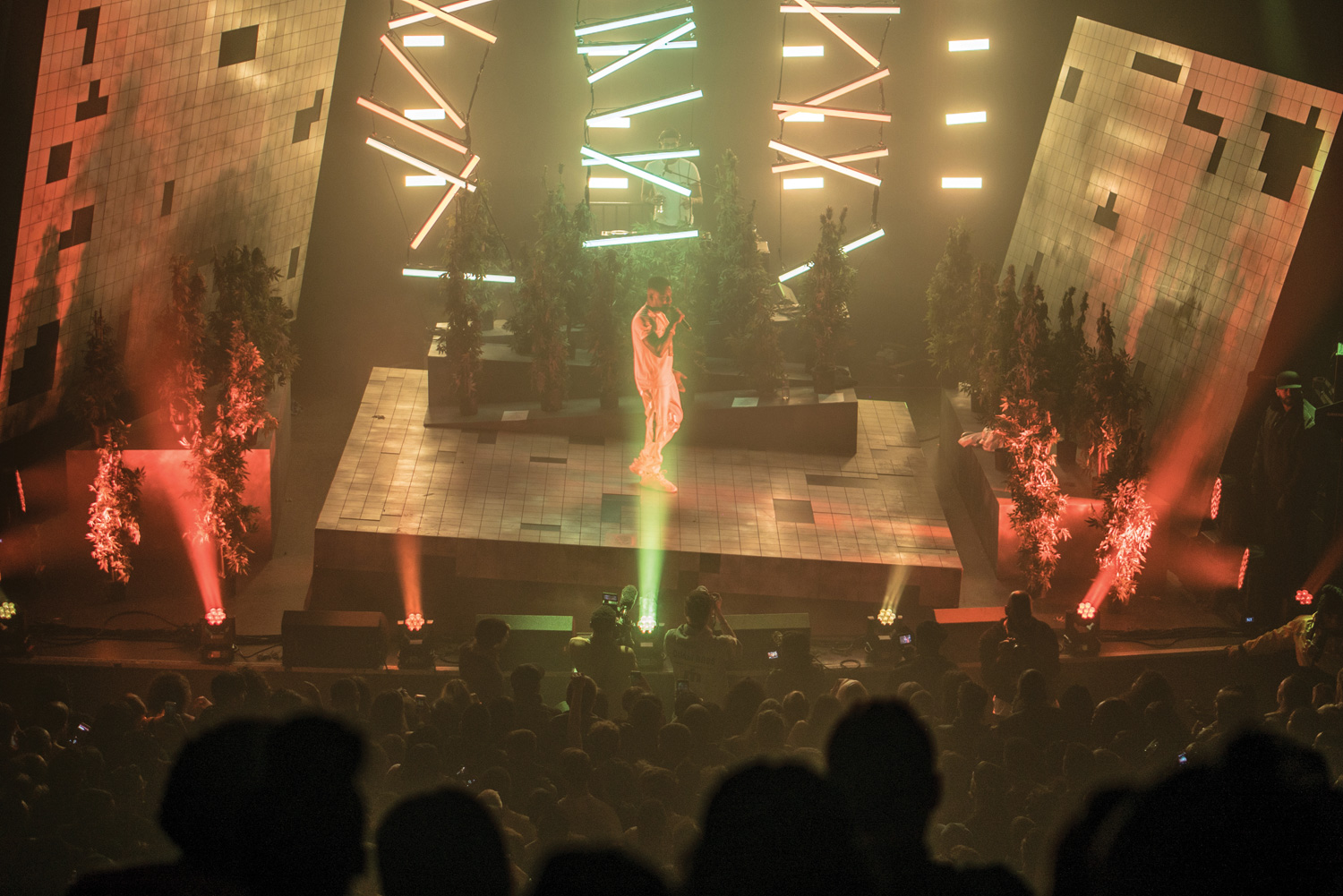 His breakthrough track ‘Ain’t The Same’, showcasing Steel Banglez’ inimitable form of hip hop beat – a kind of 100 bpm rendition of the vocal warble and warm bass of UKG – was a high water mark in UK rap videos. It featured Mist taking part in a mini-movie set in Dubai that featured quad biking in the desert and lounging on yachts with sheikhs, and signalled a game change in UK videos, with an arms race starting amongst MCs competing to appear in the most luxuriously exotic locations imaginable. Mist stayed a step ahead; while other artists were trying to catch up with songs shot in the sunshine, he was rapping from a helicopter in ‘Madness’, or on a sleigh being drawn through Alaska by a team of huskies for ‘Hot Property’. But crucially, his everyman lyrical content shone through; ‘Madness’ is about Mist’s bewilderment to see himself in these positions: “Yeah, all this fame is a madness / I blew off my pain it’s a mad ting / But my mom’s in the grave it’s a sad ting / But when I feel pain it’s a lab ting / Life is a madness / Fame is a madness.”

And it’s this mix of wild stunting and a constant kind of double-take that he’s the guy doing it that appeals to Mist’s fan base. They see him in Dubai or Alaska and think that, had the dice rolled differently, maybe that could be them.

“A lot of people have told me they can relate to what I rap about,” he says. “People who’ve gone through the same shit I’ve gone through, for example losing their parents – when they hear that in the rap they can really get it. I get a lot of messages from people who say that my tunes have helped them through a time in life that’s hard, and that to me is… it’s proper, man. I never thought I could tell my story and make the world understand where I’m coming from, and enjoy it.” 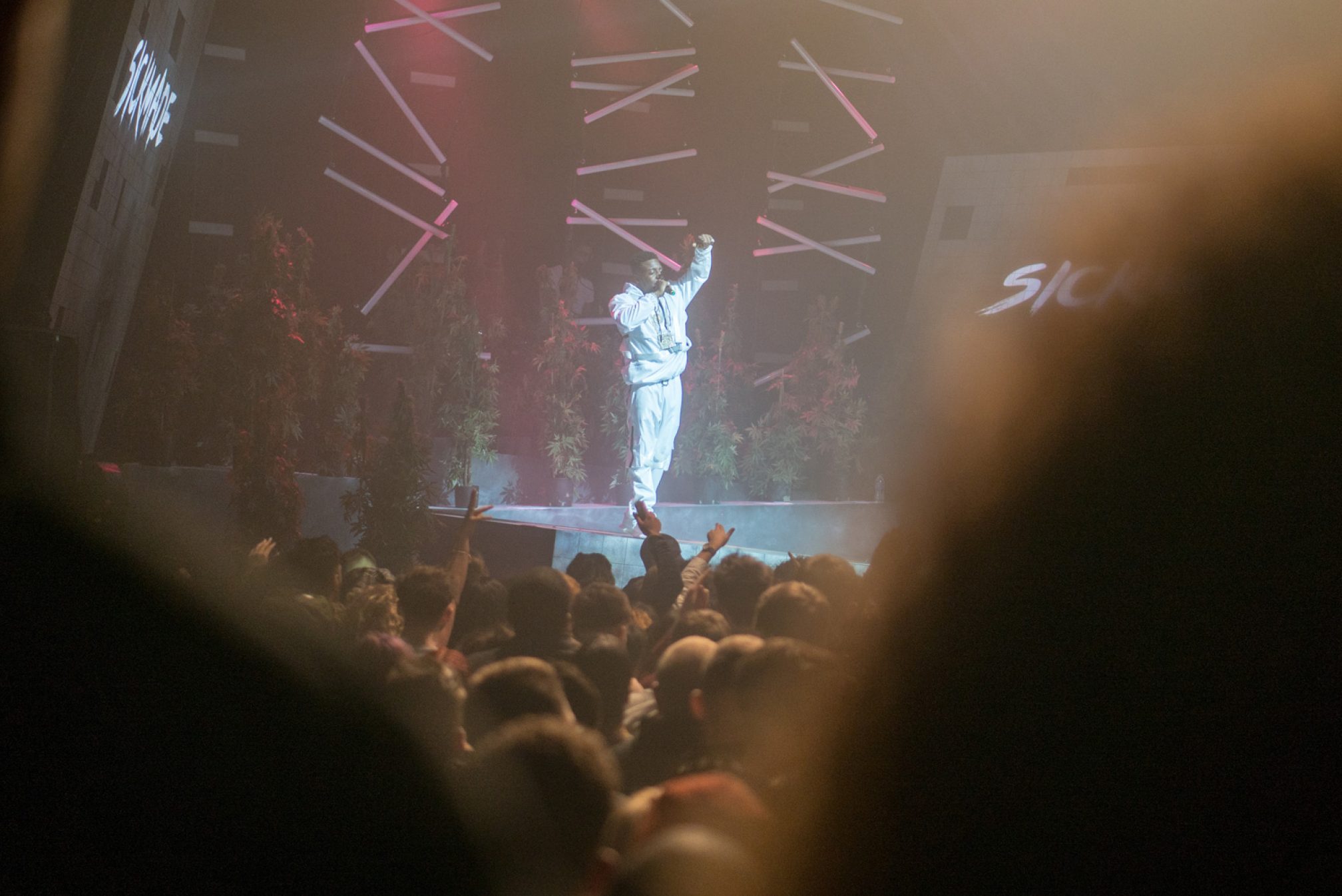 Based on the London show, ‘enjoy it’ is an understatement. The crowd are singing back every word, even on the new tracks that have been out for less than a week. New cut ‘Moshpit’, recorded with regular collaborator Mostack, has the venue doing exactly what its title suggests. Pulled up a good three times, it sounds like a festival classic in the making (indeed, it’s been created as result of Mist’s newfound confidence gained from seeing the effect his music could have on a festival stage – it’s part of the Mist persona that this rise to festival-smashing performer is another thing making him shake his head in wonder.)

“Last year was the first time I’d been to any of these places – Wireless, or We Are, or Glastonbury. Glastonbury’s like a little city of festivals, seeing the crowd at the main stage was immense – it was inspirational for my career. I remember first going there thinking, ‘Ahh this is gonna be weird, Glastonbury ain’t gonna know about me’. But when I came out the reaction off the fans was serious, very serious.

“Festivals have changed a lot – I feel like it’s my era,” he continues. “Before, there wasn’t really urban music there, but now festivals have taken in grime music and UK hip hop, UK rap a lot more and it’s such a great thing to be part of it – to be able to go to a festival and make people mosh off rap! It’s a great feeling.”

And as he closes his set in the Forum with a triumphant rendition of ‘Madness’, the crowd roaring back the bewildered, exultant lines ‘all this fame is a madness’, it’s clear that that great feeling is going to be lasting for some time yet. Mist, humble and triumphant in the middle of it all salutes the crowd, Banglez pulls up the tune, and they drop it one more time.

‘Diamond In The Dirt’ by Mist is out on Sickmade now