Sub-zero winds are howling down Mabgate. Another flurry of snow coats 50-odd people as they try and turn their backs. Nobody knows how long they will be standing here because, like every month at 11:30pm, this party is already one in, one out. But despite the cold, no-one budges, as inside the vast former iron foundry is one of the UK’s most revered soundsystems, and one of its most special club nights.

Behind us and beyond a flyover the John Lewis car park glows ice white, and next to us yet another block of flats for ‘young professionals’ is rising from the ashes of what was once a hive of warehouses turned cheap-to-rent creative spaces. These very visible encroachments are threatening the existence of Cosmic Slop– but also something much more important.

Income from this monthly party, started in 2008 by Tom Smith, Kat Soutar and Charlie Stobbart, is used to fund MAP, a pioneering charity that provides BTECs in Creative Media and Art & Design, alongside qualifications in Maths and English, to 11 to 16-year-olds who have been removed from school for various reasons. Around 15 of them study in different rooms of the once glorious foundry, which has high ceilings but flaking paint, heavy double doors and ornate plasterwork and pillars throughout. Within the next 18 months or so the landlord wants to sell to developers as the town centre expands. He’s given the current inhabitants the chance to buy him out, but it will cost £2.4 million. 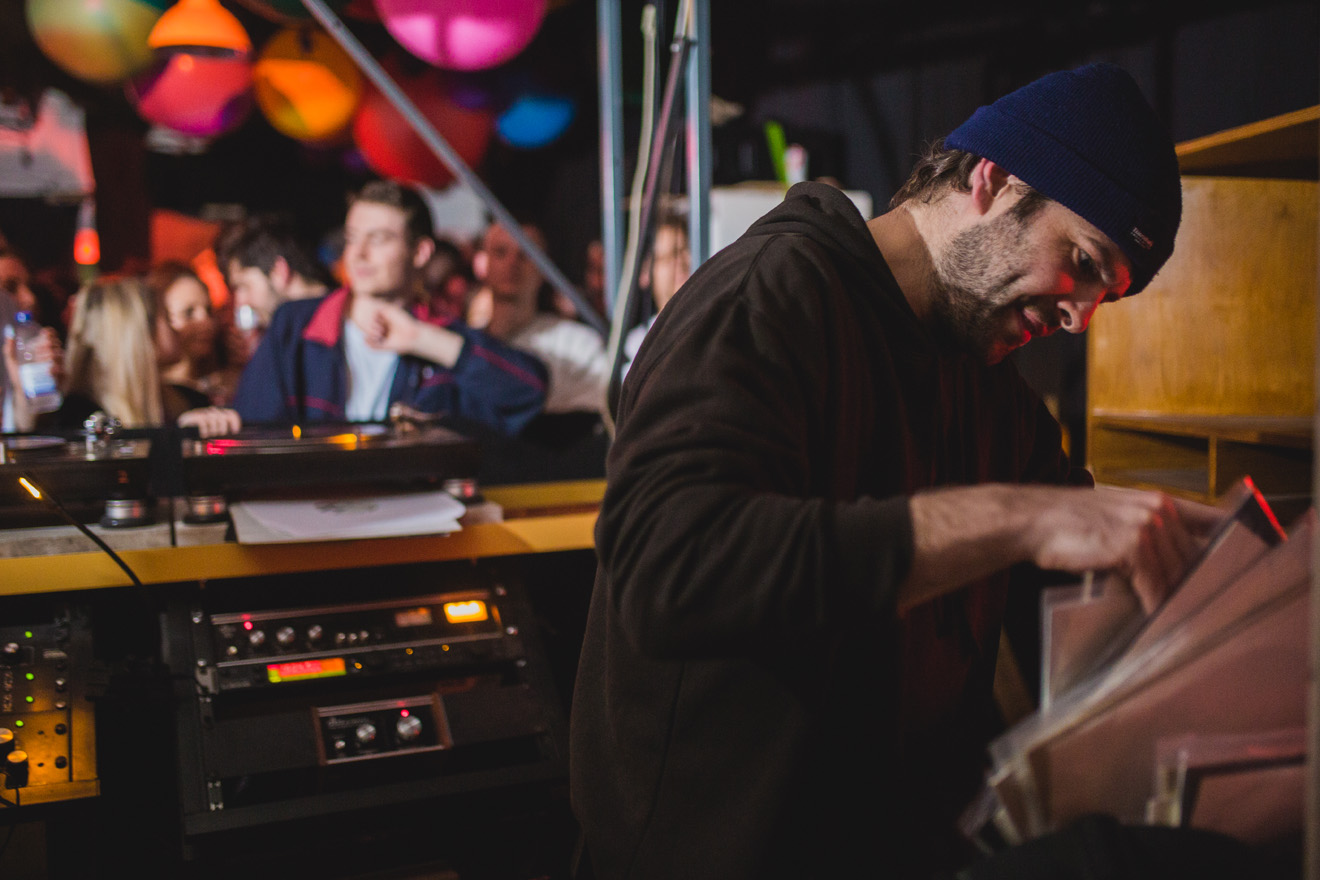 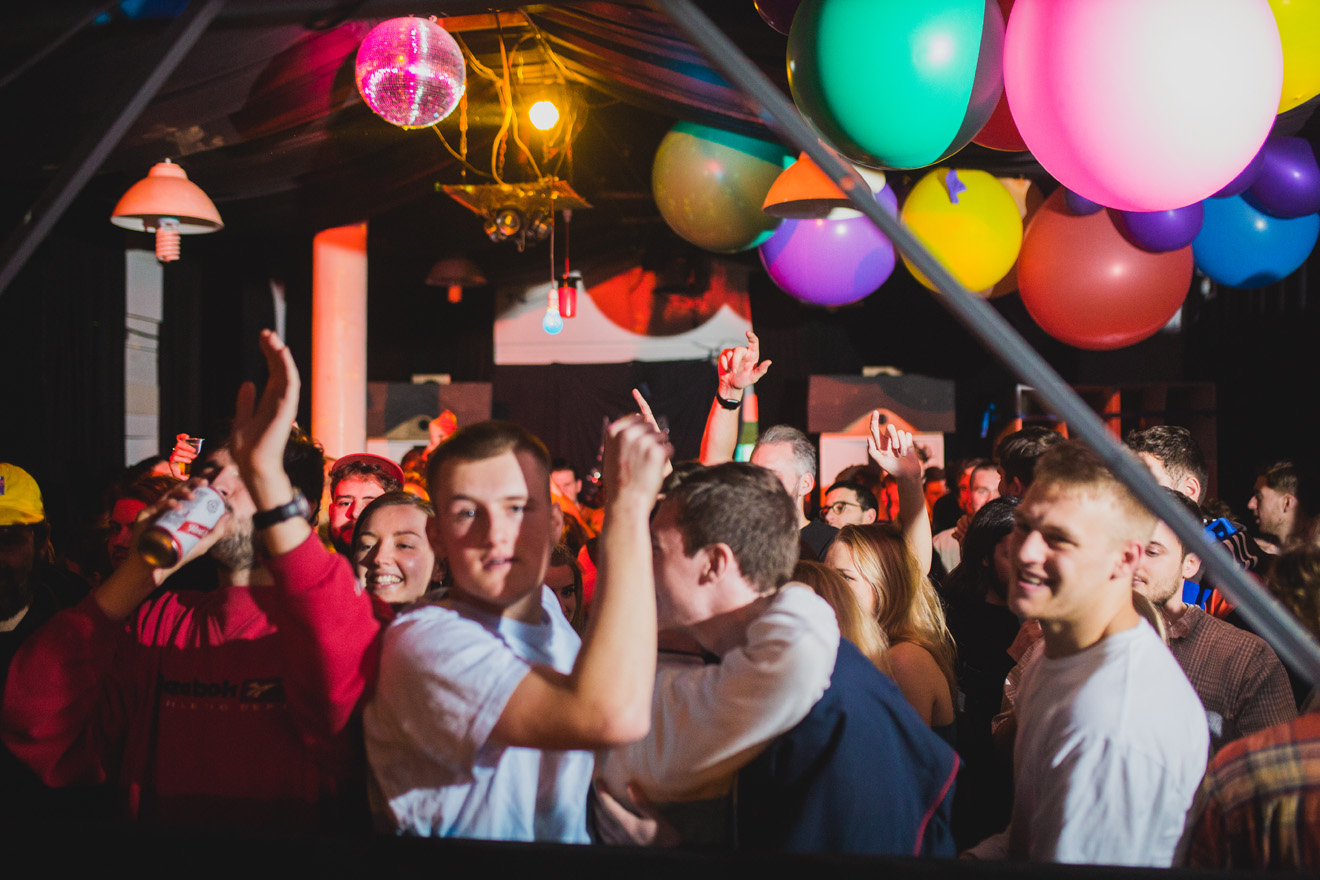 At 36, Smith is an infectiously inspirational character, and isn’t cowed by the challenge. With a small team he is taking it head-on and, if successful, hopes to convert some of the unused spaces in the building into a student-run café that uses fruit and veg grown on the roof. Various independent printers and woodworkers currently use the basement space and are the basis of his grand community vision.

After a briefing in a small holding room from a friendly bouncer who tells us where to catch taxis and find the closest cash machines, a batch of us enter the 200-capacity party space, which is a bit like a living room with curtains lining the walls and beautiful parquet flooring. Giant wooden speaker stacks fill each corner, and the floor-level booth is made from scaffolding. The soundsystem was hand-built by Smith in his early twenties, using money from a late grandfather, parts from eBay and a wealth of instruction from François K’s long gone Wave Music forum. Floating Points rates it as the best in Europe, and DJs such as Theo Parrish often pop by to check it out when they’re playing elsewhere in town. 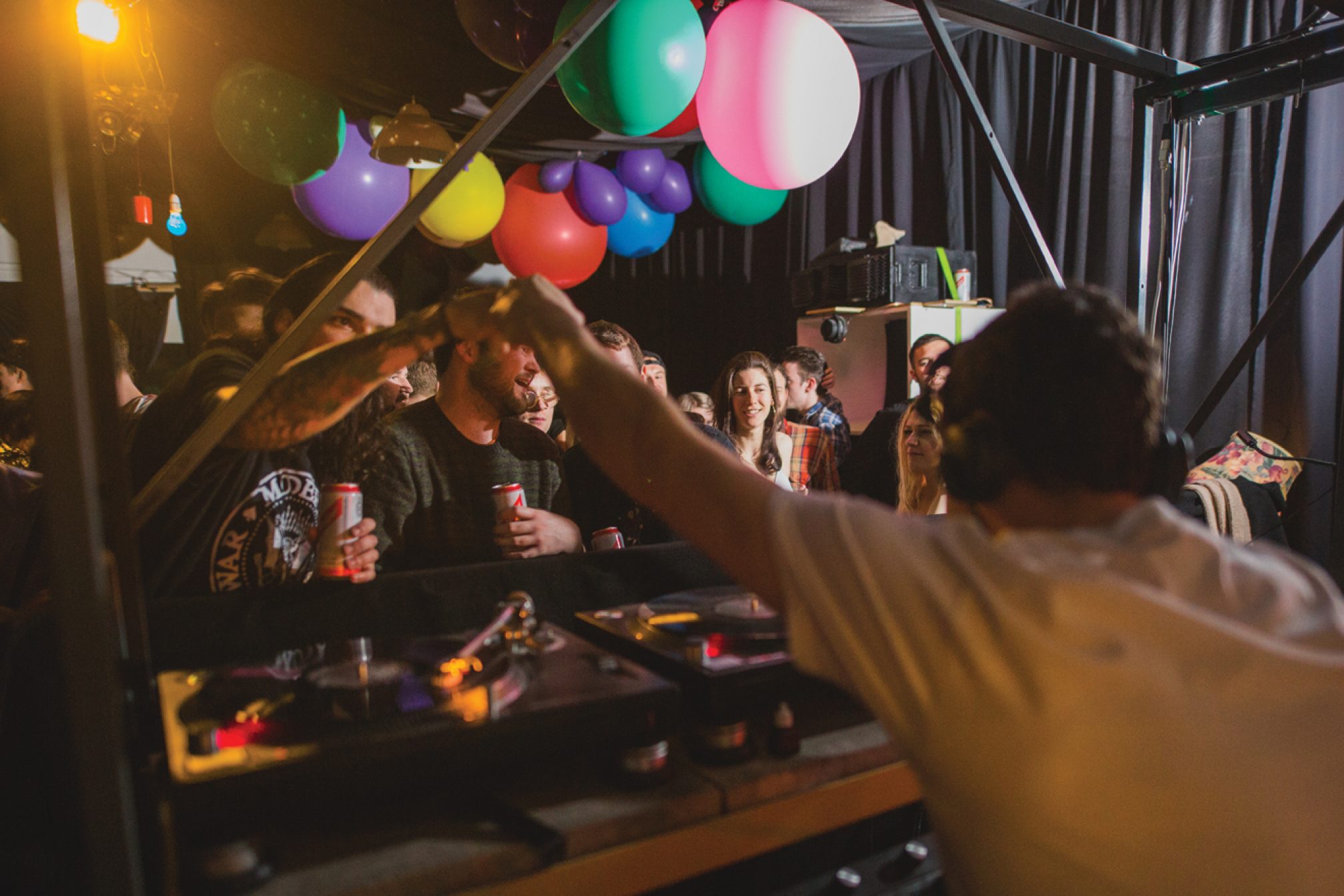 Tonight, resident-since-day-one and charity trustee Mike Greenwell and Smith are playing back-to-back all night. Unannounced guests regularly include the likes of Floating Points, Four Tet and Mr Scruff, who all play for free. The lack of promotion and hush-hush headliners has kept Cosmic Slop a word-of-mouth favourite for years, but now the city has caught on. It means the crowd is younger than it once was, but just as diverse: Slop – as regulars call it – is home to a broader spectrum of skin colours and sexualities than any other party in Leeds.

“We see Leeds heads [coming] down, students, out-of-towners,” says Mike as Smith drops an un-Shazamable grime track before sitting back to enjoy it as much as those on the other side of the decks. “Everyone settles into our vibe quickly. Because of this we have always played right across the board, and thankfully we have a loyal fan base who enable us to, so newcomers know what we’re about.” 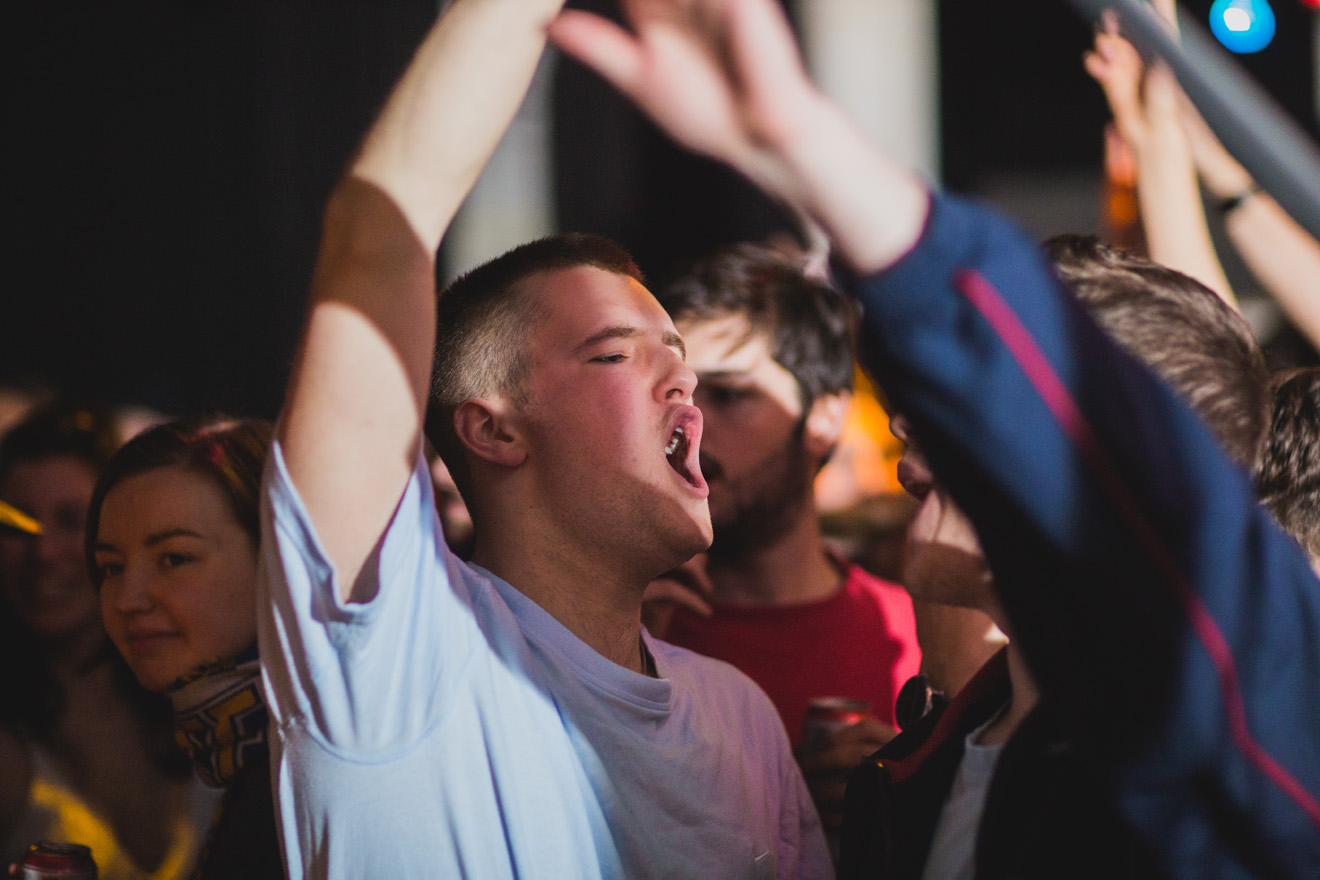 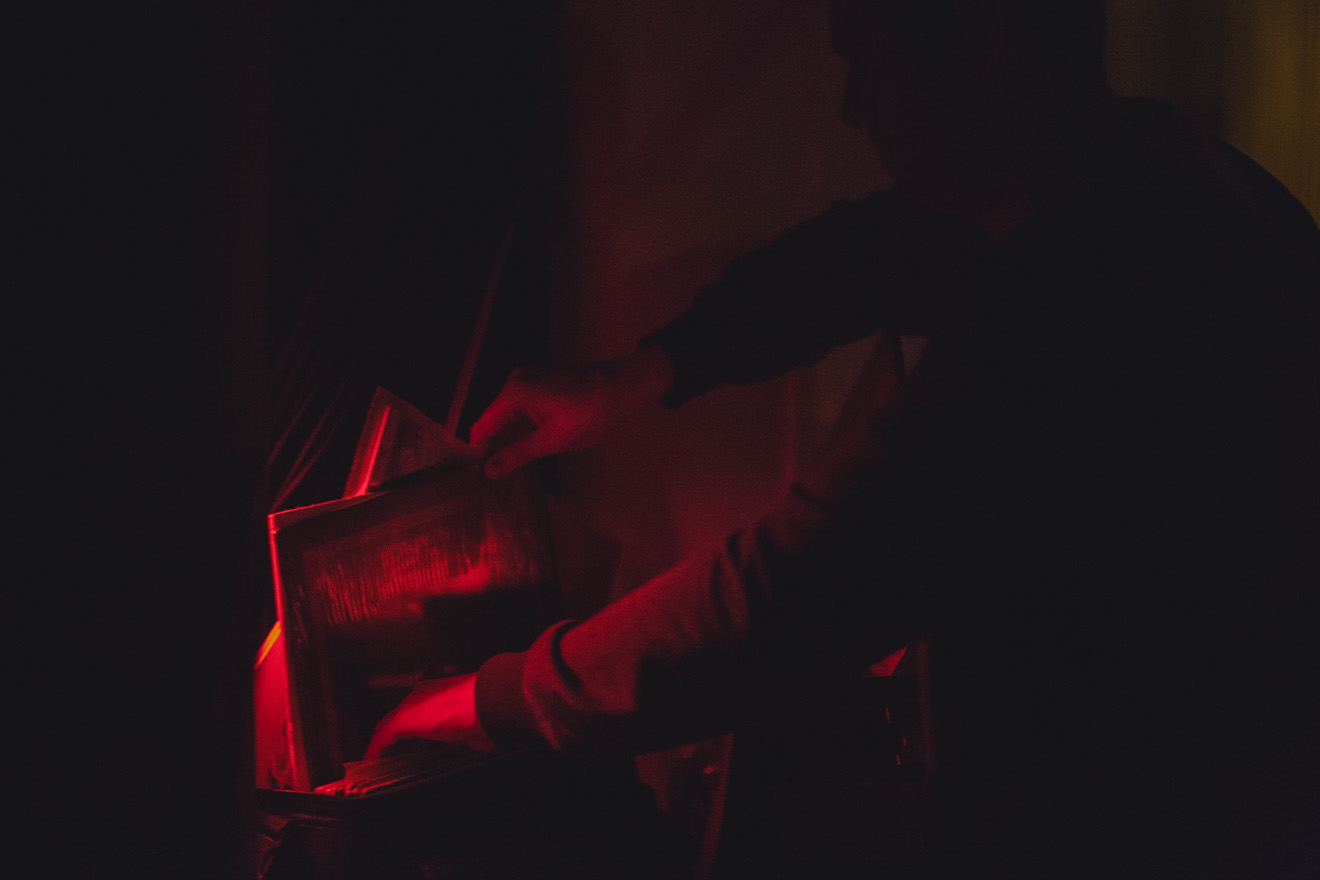 This is not an intense drug club. No-one looks wasted, not the 18-year-olds nor the 50-year-olds. It’s more of a friendly listening session where real music, rather than tracks and mixing, are the focus. Throughout the night, people are smiling and hugging, climbing on each other’s shoulders and sipping a basic selection of beer – the limited range excusable because of how cheap it is. David Mancuso’s Loft parties are a clear inspiration: as at his events, fresh fruit and cake is available for free, and copies of the JBL bullet tweeter arrays designed for the New York legend hang above the floor. In the corner a giant sculpture of a heart made by MAP students hangs down, and is said to have fully inflatable ventricles.

Around 1am, Plastikman’s ‘Spastik’ tears out of the speakers. The lights go out, and for a few minutes this is a rave. But just as quickly, it’s over. Warm red and blue lights re-heat us all and super-rare afro grooves lift the mood before a Skepta track ignites a communal skank. Music with meaning is a big feature at Slop: synth jams like ‘Love Is the Message’ resonate next to gospel disco anthems from The Clark Sisters, while obscure jazz and Brazilian beats can follow more house-led cuts in blends that would jolt other crowds. But not here. This is a grown-up party with a grown-up goal, and the fact that it all plays out in a building called Hope House is perfectly poetic.

Donate to the MAP charity here