“This is kind of my ideal week” says Martijn Deijkers, sipping green tea in the sunshine by Camden Lock the morning after setting 93 Feet East bouncing with a set of deep and intense jungle-tempo rollers. “One night playing techno, one night playing drum ’n’ bass with Bailey and Grooverider, then the next day a radio show playing jazz, then a night at Rye Wax playing my new album...” This is what Martyn (as he’s professionally known) is all about: a musician and DJ who can not only turn his hand to whatever style he wants, but earn the respect of that scene. In 20 years, he’s helped kickstart drum ’n’ bass in his native Netherlands, created a celebratory dubstep anthem that soundtracked the genre’s global breakout phase (and put Hessle Audio on the map to boot), become one of the defining voices of multifaceted 2010s bass music, worked with everyone from Ben Klock and Steffi to Four Tet and Flying Lotus, mixed the prestigious (and still brilliant) Fabric 50, released albums via Brainfeeder and Ninja Tune, and now finds himself a resident at Berghain and putting out his stunning new album on the club’s Ostgut Ton label.

And there’s a powerful reason, too, why he’s counting his blessings rather than resting on his laurels at this stage: he nearly died last year. “I was
in the studio on my own,” he says, his conversation as wry and fluent as ever despite the dark subject matter, “and I blacked out. I don’t remember anything until I woke up on the floor with a bad headache, and straight away because of the headache I thought I’d had a stroke.” In fact it wasn’t: the headache was caused by one of his keyboards falling on his head as he keeled over – “a small one, luckily!” – and he’d actually had a heart attack. 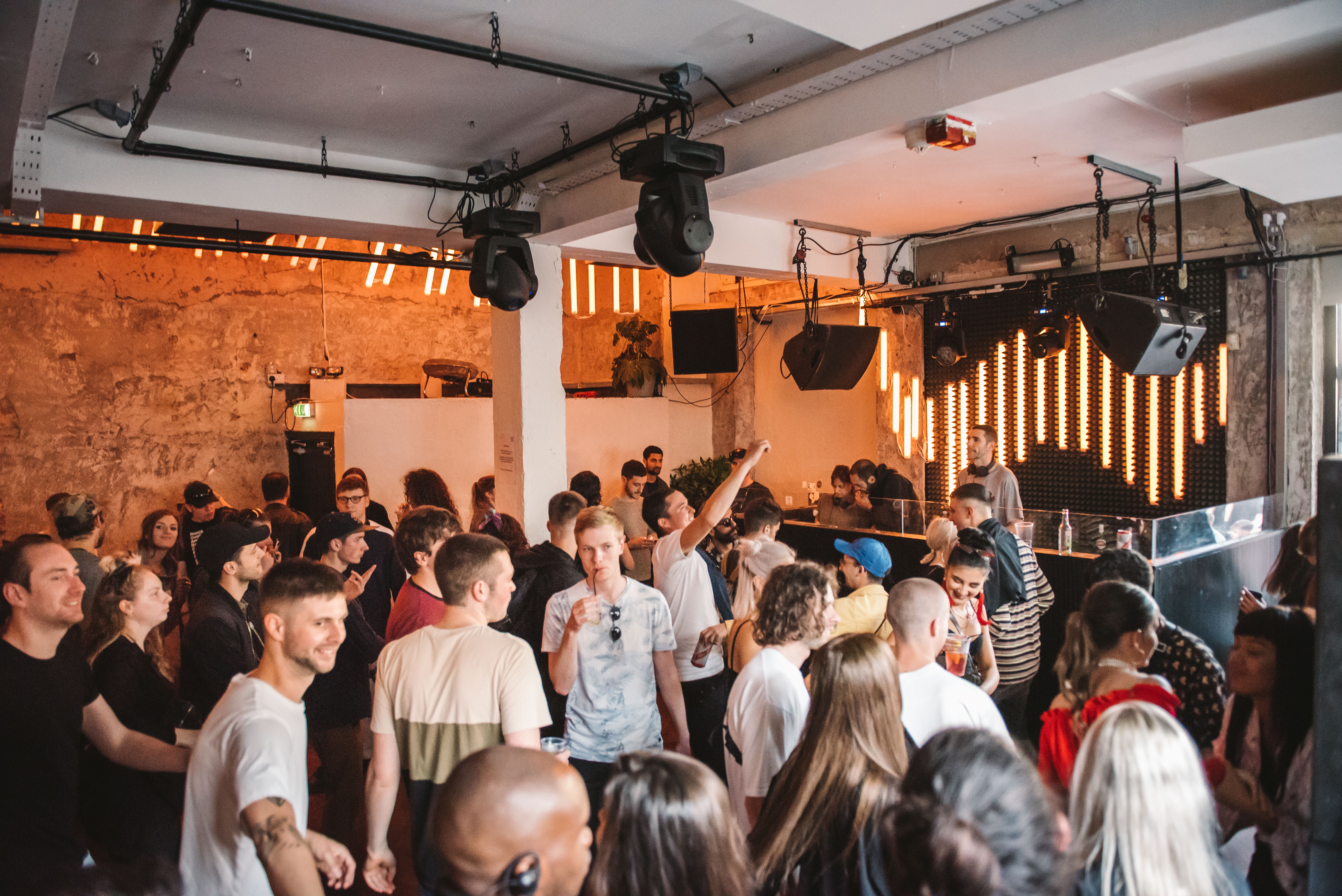 Thankfully, though, the congenital condition that caused it had been diagnosed in 2004 and he’d been fitted with a pacemaker in 2011. The pacemaker restarted his heart; if it hadn’t have been for that he’d be dead. By the time the ambulance arrived he was up and walking; they didn’t believe at first that the slim, smiling man waiting by the door could be the 43-year-old heart attack victim they were looking for.

Physically, he was OK, but as he recuperated in hospital the psychological impact was major, not least because it was only a month after Marcus Intalex – a close friend, and one of Martijn’s earliest supporters in underground music – had died unexpectedly. It was less than three years, too, since the tragically early loss of another good friend and collaborator, Stephen Gordon, aka Hyperdub main-stay The Spaceape. Taken together, life was thrown into stark relief. “I thought a lot about what was important,” says Martijn, “but also what was not important. In life it reminded me not to waste my time, especially with people who demand attention for no reason... and in music, too, I remembered that what you leave out is one of the most important things.”
It was this thinking that led directly to ‘Voids’, his first album for Ostgut Ton, which, as the title suggests, is full of deep spaces – and is some of his finest work yet.

The revelation about musical space came while listening to a 1979 jazz percussion record (Max Roach’s ‘M’Boom’) in hospital. It triggered thoughts about his music in the here and now, but there was also a connection to the very beginning of his musical life. Two of his cousins were jazz drummers, and hearing of their exploits – like an avant-garde performance with drummers in different rooms of an empty house that was broadcast on Dutch TV – was one of his first realisations of how ambitious music could be. 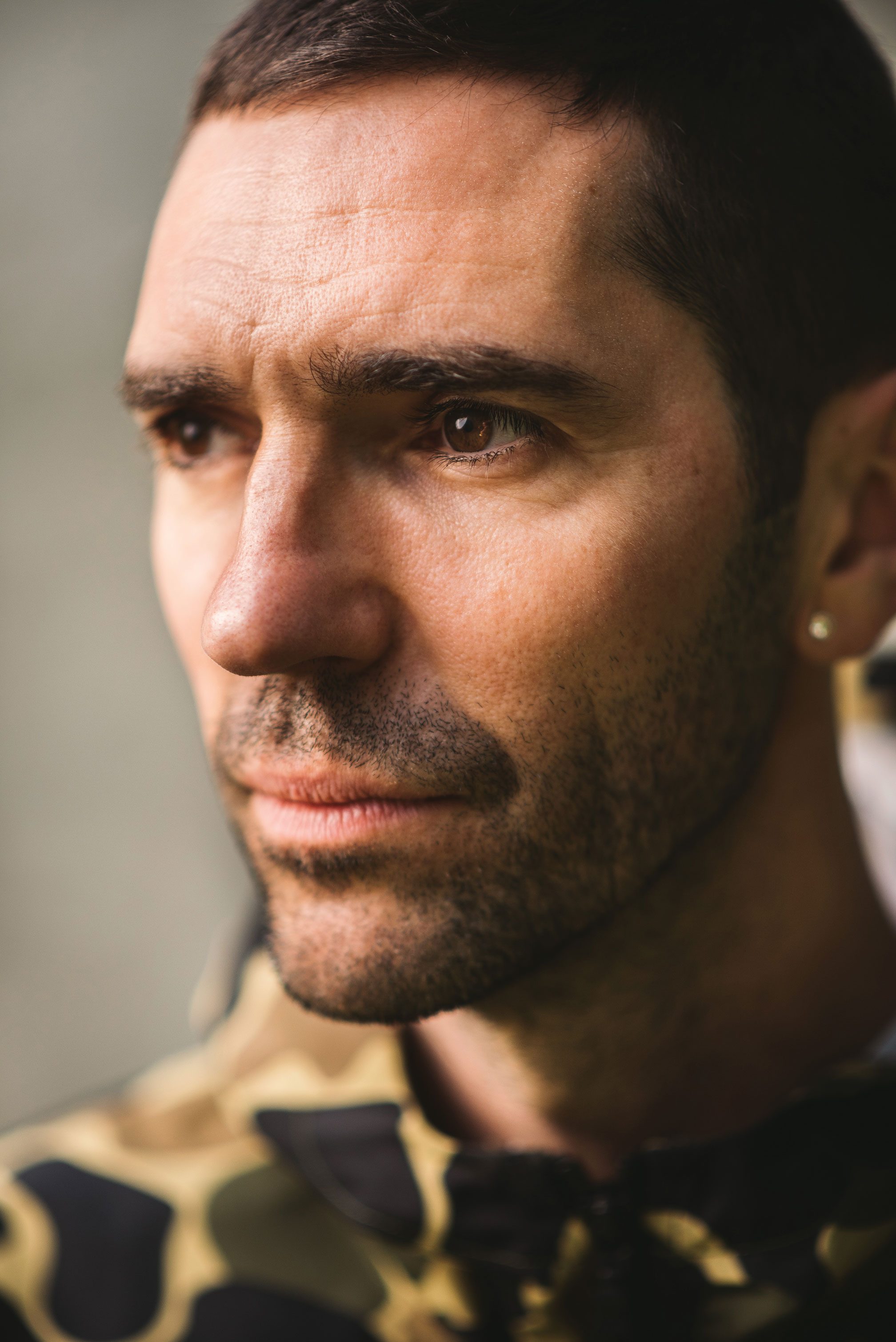 Nobody in his immediate family was so musical, but his father Gerrie Deijkers was a pro footballer – a successful striker for PSV Eindhoven, in fact – and travelled widely, bringing back records from “Ireland, the US, Southern Europe, wherever he went” – so Martijn grew up with more of a sense of music as something globally diverse than most kids in the pre-internet age could hope to. Indeed, as we walk past Camden Market on the way to the interview, he suddenly recalls his first international crate-digging experience. “My dad brought me here in 1989 when I was 15,” he smiles. “I remember buying some hair metal thing, an Inspiral Carpets 7”, and a Suicidal Tendencies record.” Then he has one of the musical join-the-dots moments that constantly pepper his conversation. “Of course,” he continues, “[bassist and Flying Lotus collaborator] Thundercat ended up playing for Suicidal Tendencies, so without knowing
it I made a Brainfeeder connection even then.”

His late teens conversion from skatepunk and indie fan to electronic music head came, quite simply, “from raving”. Eindhoven was the home of foundational techno labels Eevo Lute and DJAX, with strong connections to Detroit, and “even in our little local after-hours club, you could hear Kenny Larkin and Stacey Pullen.” Detroit techno gradually became wired into Martijn’s musical makeup, but there was still something nagging at him. “All the techno guys were older than me,” he says, “and though I enjoyed it I didn’t feel like I could participate on the same level as them.”

A ferry trip, a weekend in London, and discovering jungle would provide what he was looking for. Invited to stay with a friend in Peckham, he and a friend had a raving weekend, and were instantly besotted with London’s scene. They started going over whenever they could, out every night, shopping at Black Market in the day, “always ending up at Metalheadz at The Blue Note on Sunday, then getting the ferry home on Monday.” Metalheadz was his true clubbing baptism. “I loved the excitement of not knowing what you’d hear,” he says. “They didn’t even bill the DJs, so you’d see Doc Scott in the crowd and go ‘Wow, what’s he going to play?’ or Bailey would arrive and you’d know that meant you were about to hear some new Dillinja dubplates.” 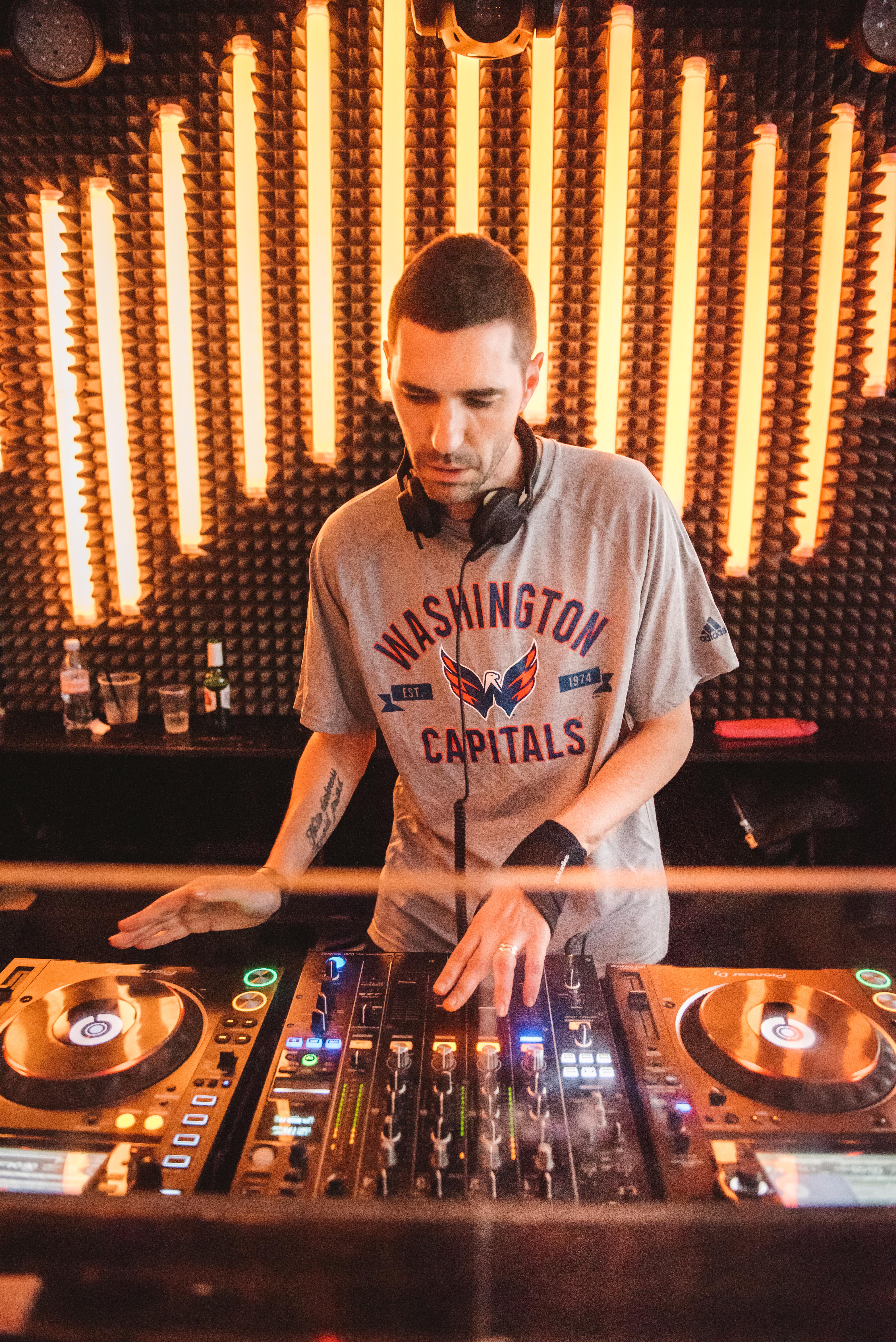 Giddy with the newness of it all, Martijn and friends thought “we’d be able to recreate Metalheadz in Eindhoven!” Of course, they could never capture the same vibe, but they made a good fist of it, becoming their own warm-up DJs (“really bad at first but learning on the job”), and eventually getting to the point where they could attract 1,600 people to their monthly raves. At last Martijn was in the driving seat of a scene, instead of following someone else’s. Getting British guests over kept them connected – and when he started producing, anglicising his name to Martyn, it was Marcus Intalex who gave him his first release, on his Revolve:r label.

Martijn’s dad died relatively young in 2003, and with his own heart diagnosis in 2004, which forced him to reassess his life – “no smoking, no drink, no drugs at all” – it’s not surprising there’s a certain seriousness that suffuses everything he does. His sound was cool and high-tech – “I didn’t realise it at the time,” he smiles, “but all that Detroit techno had rubbed off on me” – but with a deep, affecting melancholy, and a promising career in d’n’b began. But then, around 2005–6, he heard Burial and Kode 9’s early releases, and began to get a yen to make “non-d’n’b”, as he laughingly recalls people on the scene describing any music not at the strict 170–180bpm.

Again it was Marcus Intalex who had faith in him, taking a punt on releasing the dubstep-influenced ‘Broken’ and ‘Shadowcasting’ in 2007. It made a few ears prick up, but it was his remix of Romanian producer TRG’s ‘Broken Heart’ for Hessle Audio the following year that turned everything upside-down. Kode 9 hammered it (“which meant I’d achieved what I wanted!” says Martijn), the rest of the dubstep scene followed suit, and suddenly new avenues were opened up. He scarcely owned any dubstep records, so along with his own productions he drew for the UK garage and broken-beat records he’d played in Eindhoven bars as a side hustle – and found himself regularly playing alongside the likes of Oneman, Jackmaster, Scuba and the Hessle boys in what was starting to be known as ‘post-dubstep’. It was Scuba, incidentally, along with Martijn’s then agent Paul Spymania, who put the Berghain connection in place by inviting him there to play their Sub:Stance sessions – the night that really broke UK bass in Berlin. 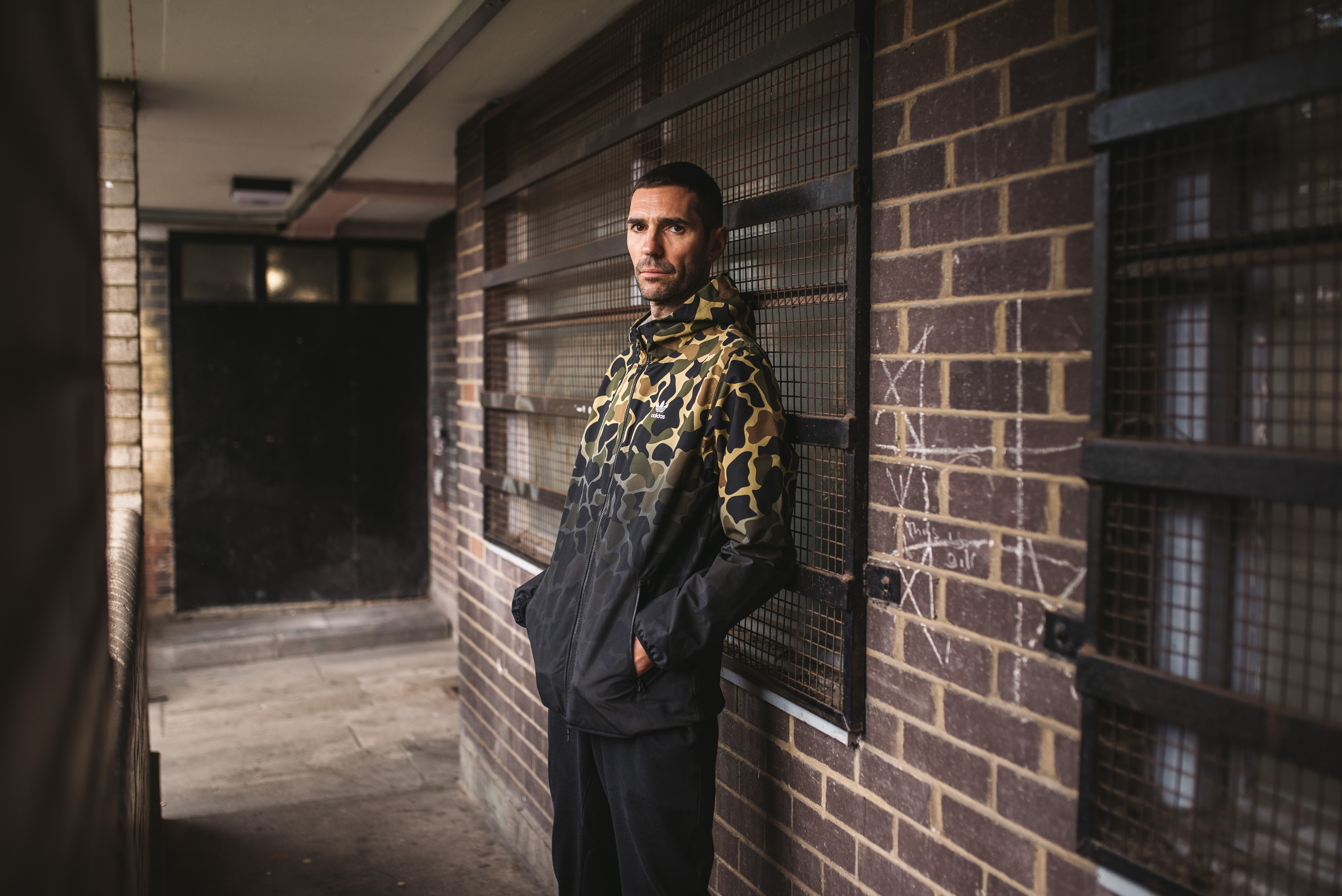 Since then, relentless work has cemented Martijn’s ability to connect wherever clubbers are open-minded. His day-to-day life is removed from the scene: after a brief sojourn in Rotterdam he moved to the suburbs of Washington DC with his American wife towards the end of the 00s, and became a US citizen in 2012. When he first moved there, he couldn’t drive; he recalls walking a mile or two every morning to get a coffee at the nearest gas station, meeting the Mexican day labourers who’d wait there in the hope of finding work, and thinking, “If these guys will go to such lengths to make it in this country, I have no excuse not to do everything I can.” The fact that he doesn’t indulge – though he’s perfectly comfortable socialising with those who do, as Mixmag witnessed at his d’n’b session – means he has a lot more time than most, not just to hone his productions, but to sate his hunger for knowledge. As befits a former journalism student, he investigates ideas to their fullest, and is currently in the early stages of writing a book on musical history.

Much like the Washington DC ambulance crew, Mixmag finds it hard to see Martijn as a man who’s not long ago had a brush with death. Perhaps it’s his palpable appetite for life: though he looks low-key in his all-black everything and cropped hair, and though he has a scholarly conversational style, his enthusiasm constantly shines through. As tourists and hustlers bustle past, our discussion in the Camden sunshine rolls on – from the love of 1991 bleep ’n’ bass rave he shares with Ostgut friends Steffi and Shed, through the jazz Gilles Peterson played at the Dingwalls venue visible across the canal from us, through ice hockey, the history of various British cities and the quality of BBC documentaries...

Finally, Mixmag asks whether his confrontation with mortality has affected his thirst for music and knowledge. “I guess it has,” he says, pausing for thought. “I was always proud that I worked hard and could prove myself in lots of areas. But when you know how little time you might have, it reminds you
to put all your focus on what you really love.”

‘Voids’ is out now on Ostgut Ton