Having driven 10 hours and battled an almighty storm to arrive at Groningen in the Netherlands, George FitzGerald is relieved to have even made it to Eurosonic festival.

“I’m really sorry, we didn’t get time to do a soundcheck, we drove straight into the storm,” he politely apologises to the crowd of music-savvy festival-goers and industry types. Dressed in black skinny jeans and a jumper, with light stubble peppering his face, George has a look of concentration on his face as the bass reverberates around the restaurant-turned-gig-venue Huize Maas and he starts to manipulate Moog and Roland keyboards to craft emotive vocal loops. As purple strobes accompany bleepy synths and drums, the towering speakers on either side of the stage are pushed to their limits to create hypnotic electronic soundscapes that maintain a pumping beat. While some appreciate the musicality by nodding or swaying, a group of young Dutch treat it as a rave, getting right down the front early on. Joined by a drummer and keyboardist, George – an expert in gradually layering and looping vocal samples with instrumentals – is focused on giving a performance.

Trying to perfect a live show, though, is a somewhat strange concept for a producer who’s more used to DJing for hours on end. “I was in survival mode for the first couple of tracks,” the 32-year-old admits minutes after finishing his live set. “I was on autopilot, and then I started enjoying myself. It’s a completely different experience to DJing because you’re living from moment to moment.” 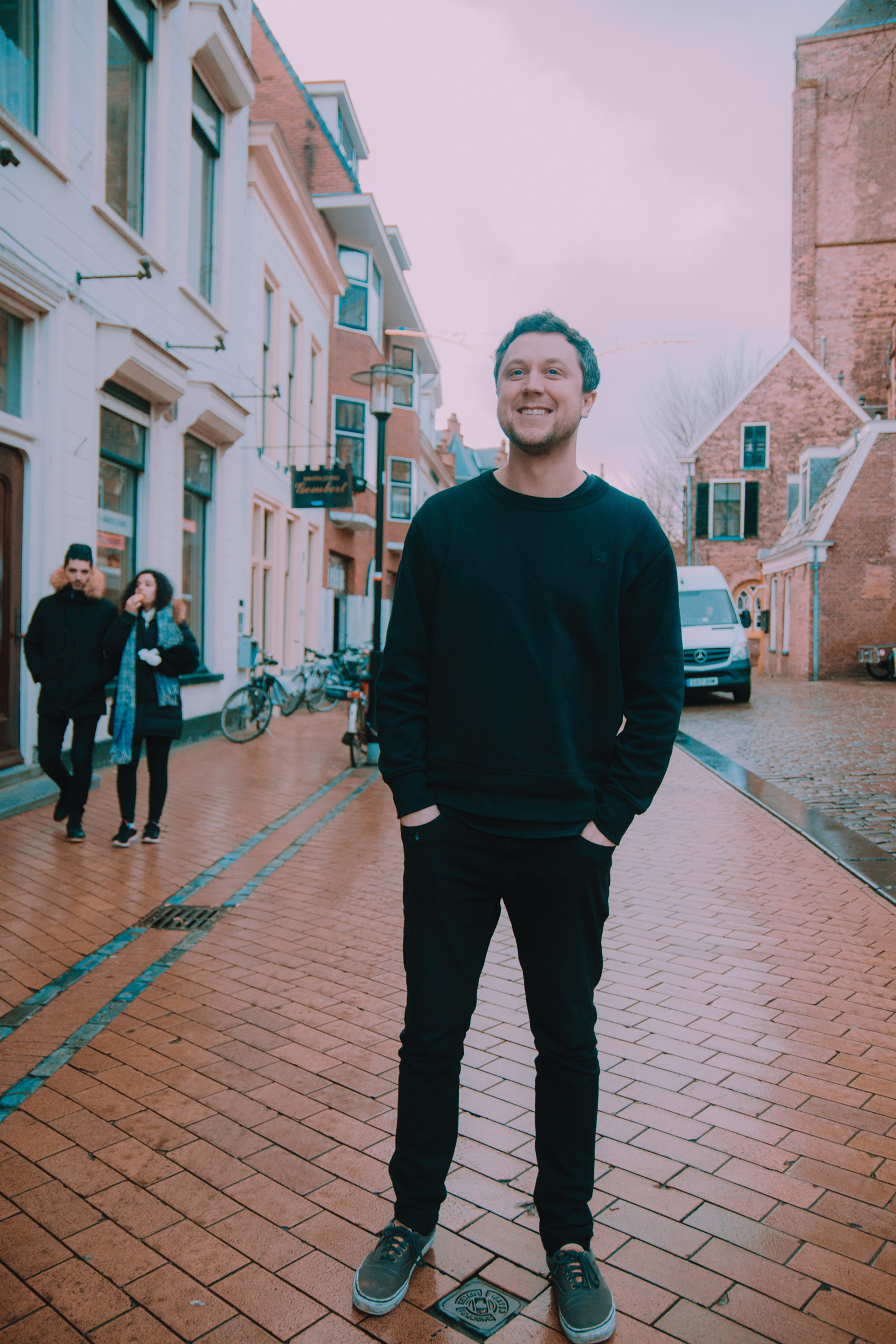 Moving into live performance – and away from creating music that’s solely club-focused – is a natural progression for George. “It was about me wanting to make these changes in my life and career and this is the way to do it,” he tells us backstage, before describing performing live as a more intense experience. “I’ve only done four shows but everyone tells me it never goes perfectly. With DJing, you can step back and take a breath after you’ve put the first track on, or if something goes wrong you’ve got time to deal with it, but performing live you’re always fire-fighting – though there’s something quite fun about that.”

Having become a father for the second time since his debut album was released in 2015, George’s new one, ‘All That Must Be’, is a reflection of how his life has changed. “It plots a course through having to grow up very quickly and being torn between a previous, hedonistic existence, and then suddenly having to fix up. A lot of the record is about learning to become a dad, getting a bit older and trying to take things at a slower pace,” he says. “Now I’ve got some grey hairs and two daughters, life is just different – so you write different music. I’m a bit more patient with my music now.”

Like the man himself, the album is subtle and unassuming, but quietly impressive. Each track on ‘All That Must Be’ flows into the next, from gradual opener ‘Two Moons Under’ to the emotive synths and light drums of ‘Frieda’ to the effortlessly hypnotic lead single ‘Burns’. It occupies a similar space to Bicep’s hugely successful debut from last year, and ‘Burns’ is already pushing an impressive three million plays on Spotify. 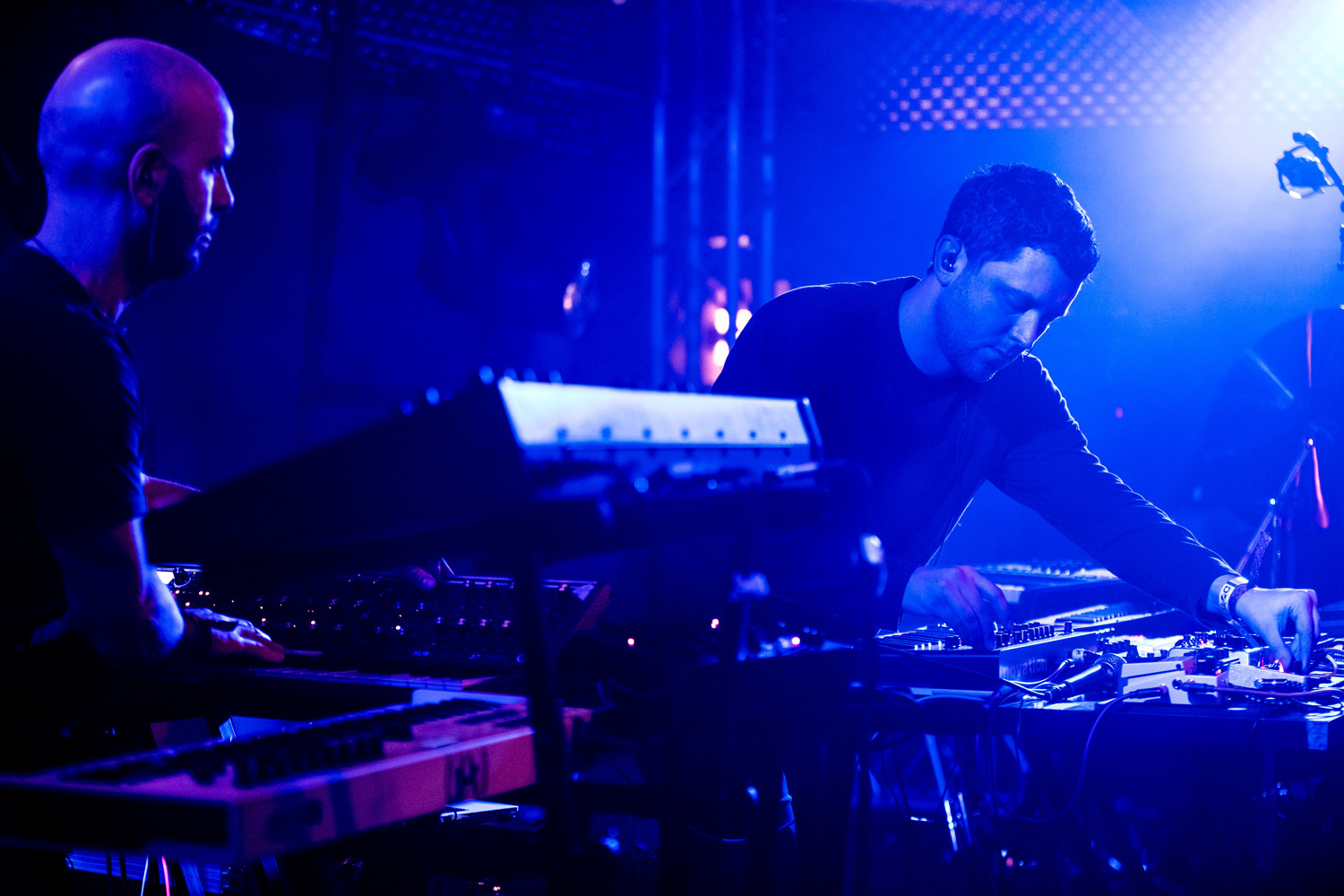 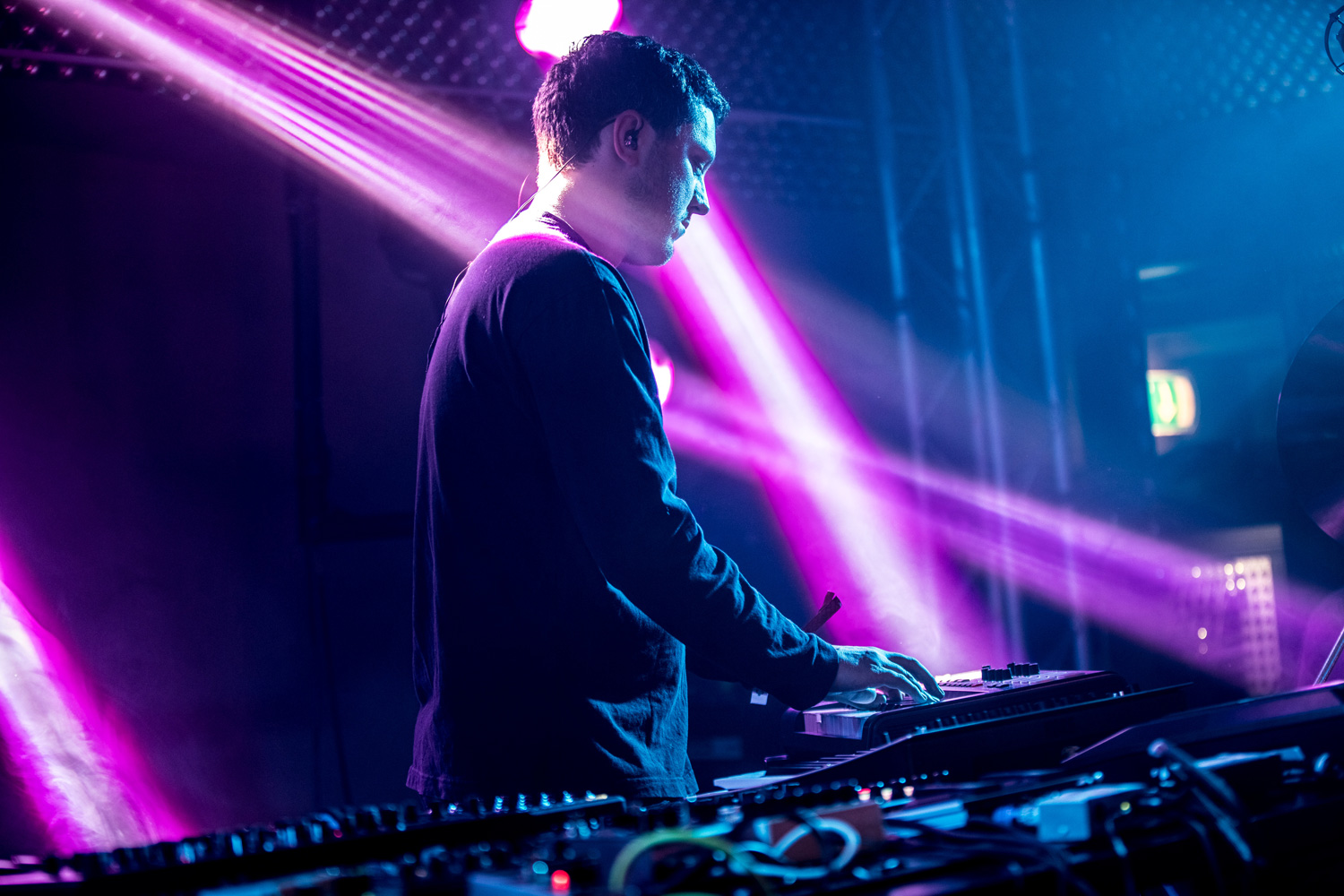 The album sees George collaborate with one of his musical heroes, too: Everything But The Girl’s Tracey Thorn lends her vocals to ‘Half-Light’. “I’ve been trying to get her to sing one of my tracks for years, and this time my pot-shot worked,” he says proudly. For the nostalgic ‘Roll Back’, he enlists the emotional, almost haunting vocal of longtime friend and collaborator Lil Silva, and he works with Bonobo, an artist whose trajectory is surely the model, on reflective instrumental voyage ‘Outgrown’.

Recording the album in London and Berlin made sense to George, having split his time between both over the last decade. “It speaks to both cities and the relationship I’ve had with them. Those two places are home – Berlin’s been home for ten years,” he says affectionately. Having moved there to work as a translator, it wasn’t long until the dubstep-loving 20-year-old was taken to Berghain. “I made friends with these big gay guys at the gym and they said, ‘You’ve got to come to this club!’” he recalls. “I’d never been to a 4/4 club in my life; I was into garage and dubstep then. I went and thought, ‘Yeah, this is cool, but I can’t stand 4/4 kick drums all night’.” But after a few more visits, he was converted. “I had an epiphany. I remember thinking, ‘This is the shit. It’s incredible’.” Since then, he’s decided Berlin is the best place to go clubbing – although says the scene there is less musically diverse than London. “There, the amount of stuff you’re exposed to, it’s a real multi-cultural melting pot,” he says. “Whereas Berlin, at least in my experience, felt a bit narrow – it’s just about house and techno clubs.”

Before his daughters were born, George was getting jaded with dance music – mainly as he was playing and going out so often. “I used to go to Berghain on a Sunday like it was the pub… I’d just sit at Panorama Bar. I certainly don’t do that any more – not that I could get away with it anyway!” Interestingly, deciding to step out of the club more has allowed George to fall back in love with it. “I used to have both feet in the club. Now I have one in and one at home, which means I really enjoy it when I’m there,” he explains. “Sometimes it felt like I was going to lose my mind because I’d play until six or seven in the morning, come back and my daughter would have just woken up as I’m getting in. It’s fucking weird,” he admits, “but it makes you appreciate it in different ways.” 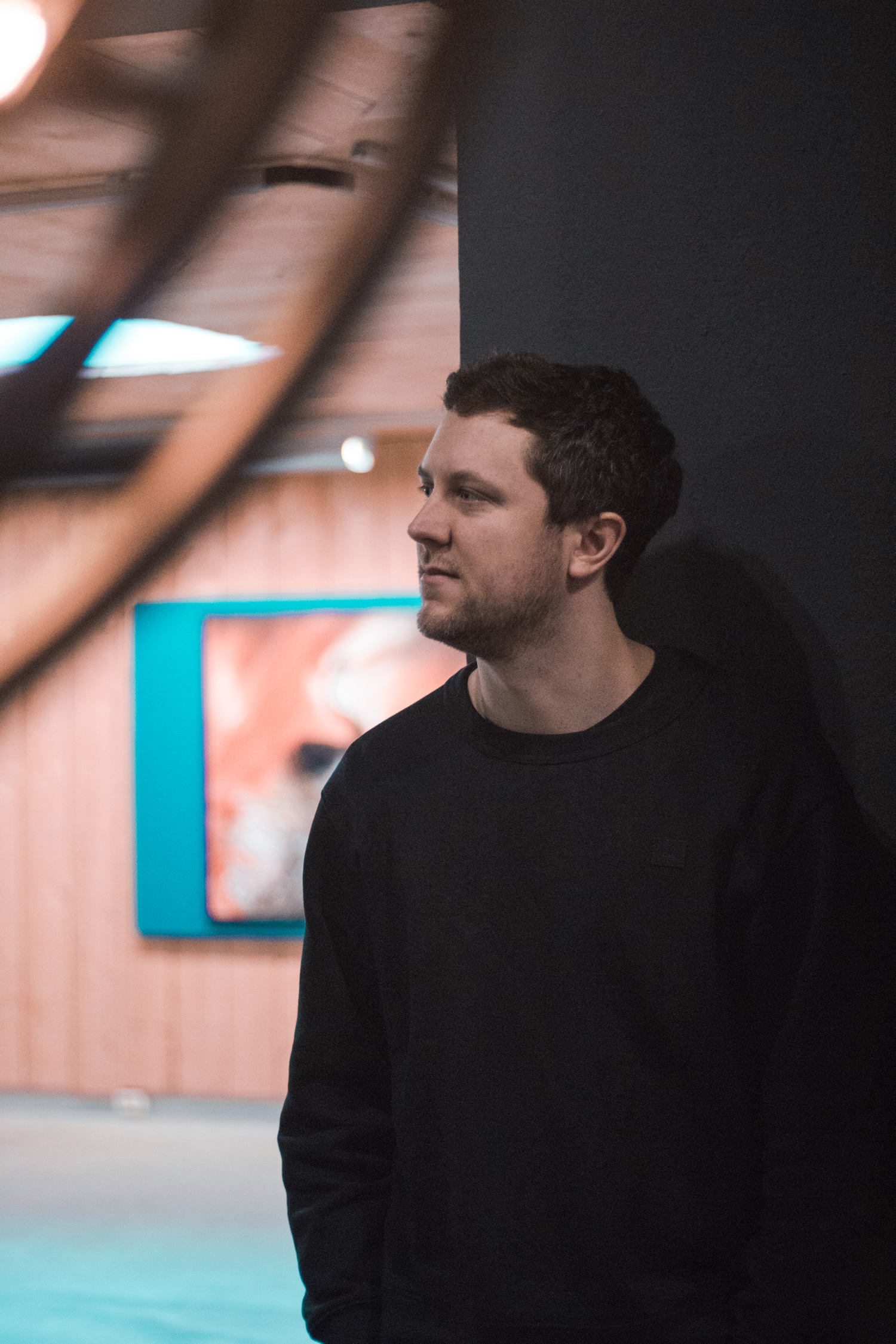 When he isn’t writing, recording, touring or spending time with his kids, George’s life is still consumed by music. “On this album I got back into learning the piano. I played it to a decent standard as a kid, and I’ve dedicated a lot of time to being able to score things and learning music theory. Since having kids, I want to be able to explain music to them. It’s all very well sitting down and saying ‘Dad fucked around on the keys and found a nice chord progression’, but I want to be able to tell them why and what makes that chord progression work.”

Compared to 2012, when he released ‘Child’ on AUS Music, he thinks dance music is almost unrecognisable today. “The way it’s gone, things get so big so quick and people get famous almost overnight,” he says. Rather than success coming from whether a DJ or producer is technically good, he argues that more emphasis is placed on the artist’s image. “Back then it was about whether you could write good tunes, but you’d have to really grind it out. Whereas now, people just come from nowhere. It’s fun, but having a really dope Instagram and saying edgy shit on Twitter – it’s just not me to expose myself like that.”

When he started DJing as a law student over 10 years ago, George had humble musical ambitions. “All I wanted was for my records to be out on wax. Then I’d train as a music solicitor and that would be my life.” Now, his horizons have expanded: spending more time in the studio, scoring TV shows, films and, eventually, producing for other artists. “If another Kelela comes along at some point, or an artist like FKA Twigs, it would be amazing to write with someone with enough magnetism and star quality that you’d get to shape something around them,” he says. “That would be really fulfilling, being behind the scenes – but things don’t just fall into your lap. You have to keep working for them.”

‘All That Must Be’ is out March 9 on Domino