There’s no entry fee. There are no DJs, no synced pyrotechnics, C02 cannons or state-of-the-art visuals. The venue isn’t a club, it’s a small café in a railway arch between New Cross and Deptford in south-east London, a couple of miles down the road from one of the country’s biggest and most well-specced venues, Printworks. There’s a tiny bar that only serves beer and wine, the furniture is mismatched and third-hand. It’s down-at-heel, bohemian, a little bit shabby, yet there’s a long queue to get in and it’s one-in, one-out all evening. Mixmag is at Steam Down, London’s most exciting club night.

“It’s centred around the eight-piece core band,” band leader Ahnansé, known to his friends as Wayne Francis, tells Mixmag, “with a large extended family of friends, some rap artists, videographers, graphic designers, dancers and other people that have been around as it’s developed over the last couple of years.”

For someone who carries themselves on stage with such presence, it’s a shock that face to face he’s so slight. Wayne is dressed casually: loose shirt, big hair, quick to smile, with the air of a man perfectly capable of helming a massive live band, both on and off the stage. If he’s suffering any pre-gig nerves there are no outward signs,and he settles comfortably into his chair and delivers a set of carefully considered and articulate answers. 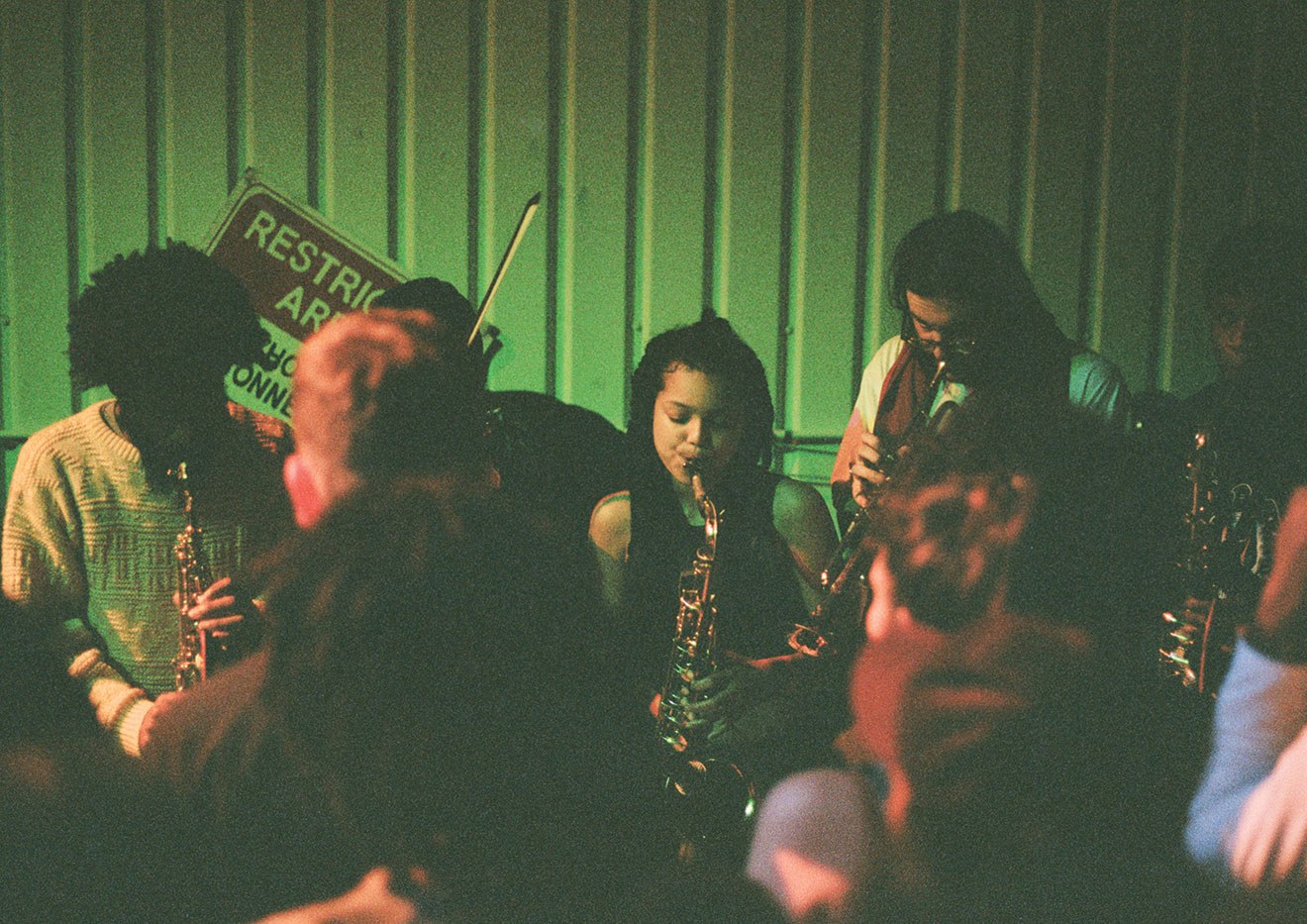 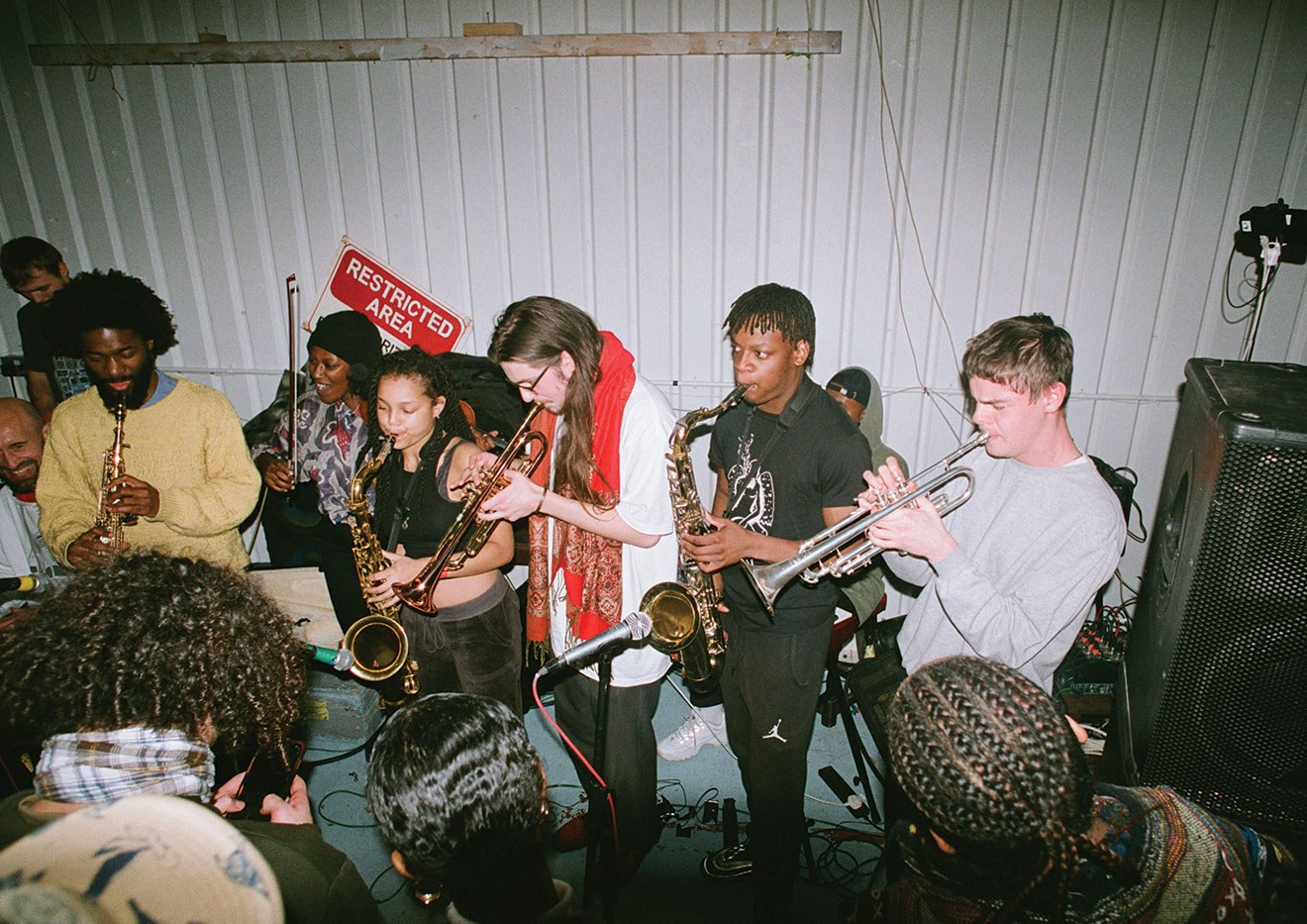 Steam Down is a weekly club night, a band and a creative collective which Wayne describes as “a live amalgamation of multiple genres found predominately in London but also some genres from the African diaspora… there’s a whole lot of different stuff that gets sprinkled in there.” Steam Down is part of the current UK jazz renaissance that includes We Out Here festival, Joe Armon-Jones, Moses Boyd, Sons Of Kemet, KOKOROKO, Tenderlonius, Ezra Collective and more, although Wayne is quick to point out that this isn’t straight-up jazz, as their music also references afrobeat, funk and grime: London soundsystem music, basically.
“I don’t necessarily see Steam Down as completely part of the jazz resurgence, with our rappers and poets and singers taking a core role and things being based around the songs and not necessarily being that instrumental; and also, I guess people always think it’s jazz because there’s a saxophone there, but actually funk and afrobeat and all those things have saxophone in them.”

Due to the reality of life for touring musicians, Steam Down has a core eight-piece band with a fluid, larger membership who can fill in when needed, and artists like Ezra Collective, Nubya Garcia and Kamasi Washington have all guested. Indeed, it was the fact that touring constantly can isolate musicians which motivated Steam Down’s launch a year and a half ago.

“I wanted to have a space where musicians can have a home,” says Wayne. “In London, it’s really difficult to find a place where you can meet up with other musicians who are going on tour really regularly, and if you’ve been on tour for too long you can lose connections with each other.” 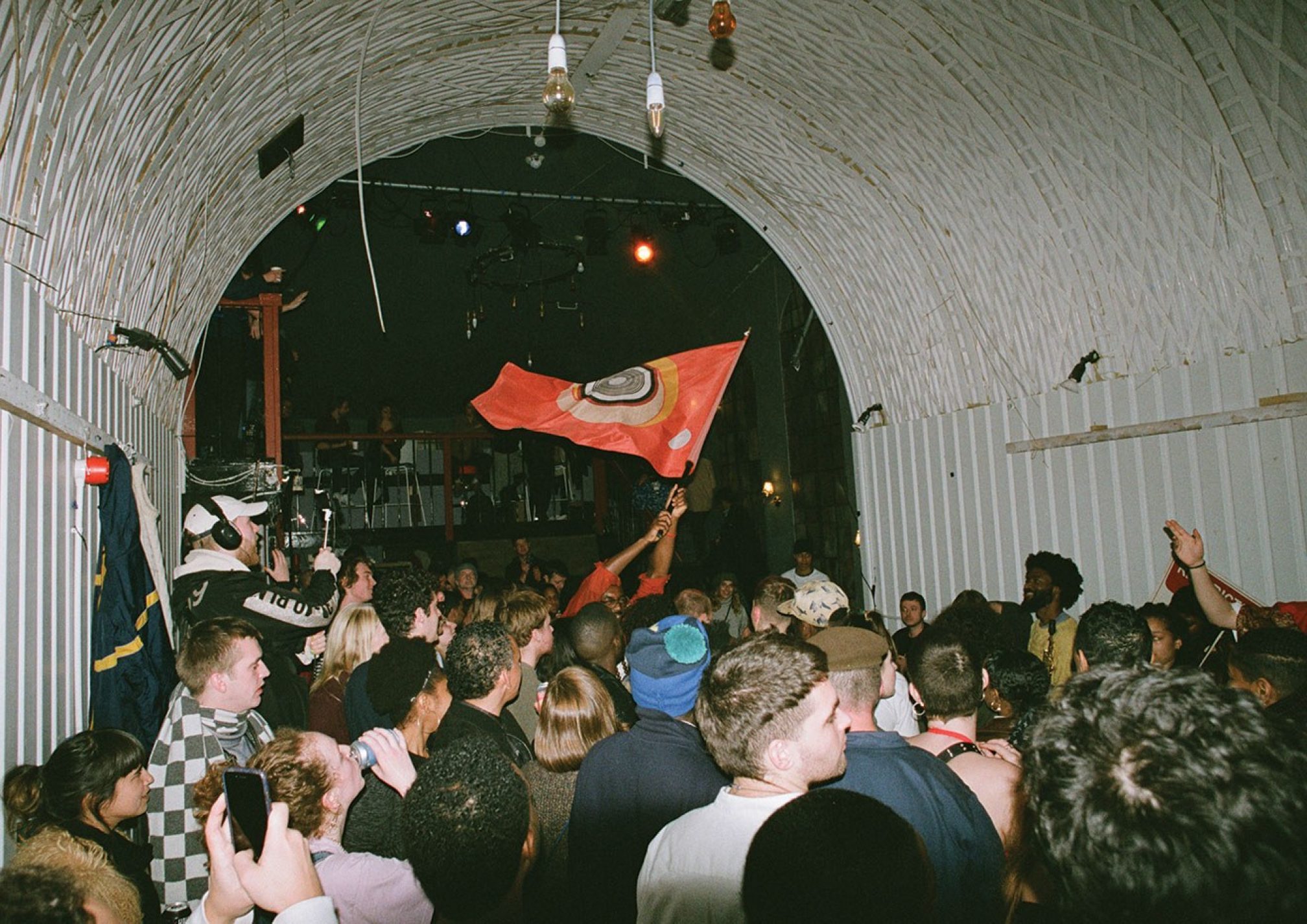 From that simple impulse Steam Down has flourished. The band have received two Jazz FM awards this year, performed a sell-out show at London’s Village Underground, appeared at We Out Here, Maiden Voyage, Love Supreme and Glastonbury, scored a record deal and released their debut single ‘Free My Skin’. Although Wayne intended to create something successful, he’s been surprised at just how quickly it’s all taken off – but the driving impulse has remained the same: bringing people together, both the musicians and the audience. “The whole idea is that it’s a space for connection. If you’re an audience member you should connect with other audience members; if you’re a musician you should connect with other musicians; if you’re creative you should connect with other creatives – and I think this space is always open for people to connect.”

Tonight is the last Steam Down of the year, and the young crowd – lots of students from local art college Goldsmiths and plenty of South London locals – are out in force. Each week the faithful and new converts gather, they all know the house rules, announced as a trimmed-down version of Steam Down take to the stage for the first of two performances. “If you wanna use your phone,” says Ahnansé, “go outside!”

The room responds as one. “If you wanna talk?” “GO OUTSIDE!”. With one final pronouncement: “And remember: NOOOO BAD MAN TING!” we set off on a Wednesday night urban jazz odyssey.

In terms of atmosphere, Steam Down is like a club night with a resident DJ who knows their crowd, and a fiercely loyal crowd who love their resident. The room itself is tiny – there’s maybe 100, 150 people here in total – and there’s no need for the usual low lighting associated with places for dancing. It’s a brightly-lit cafe but there’s a glorious lack of self-consciousness among the crowd, who get dancing hard just as soon as the band unleash. 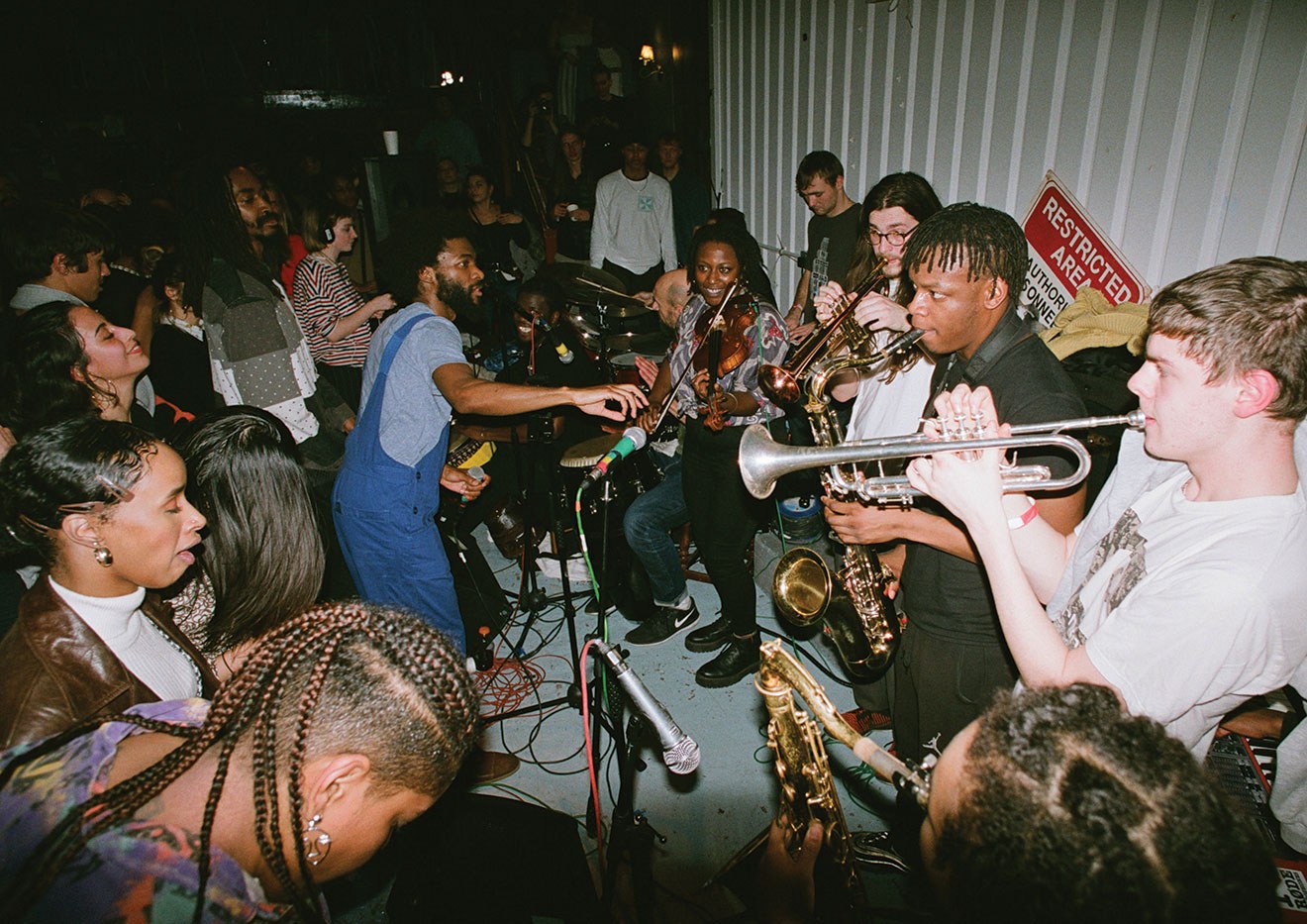 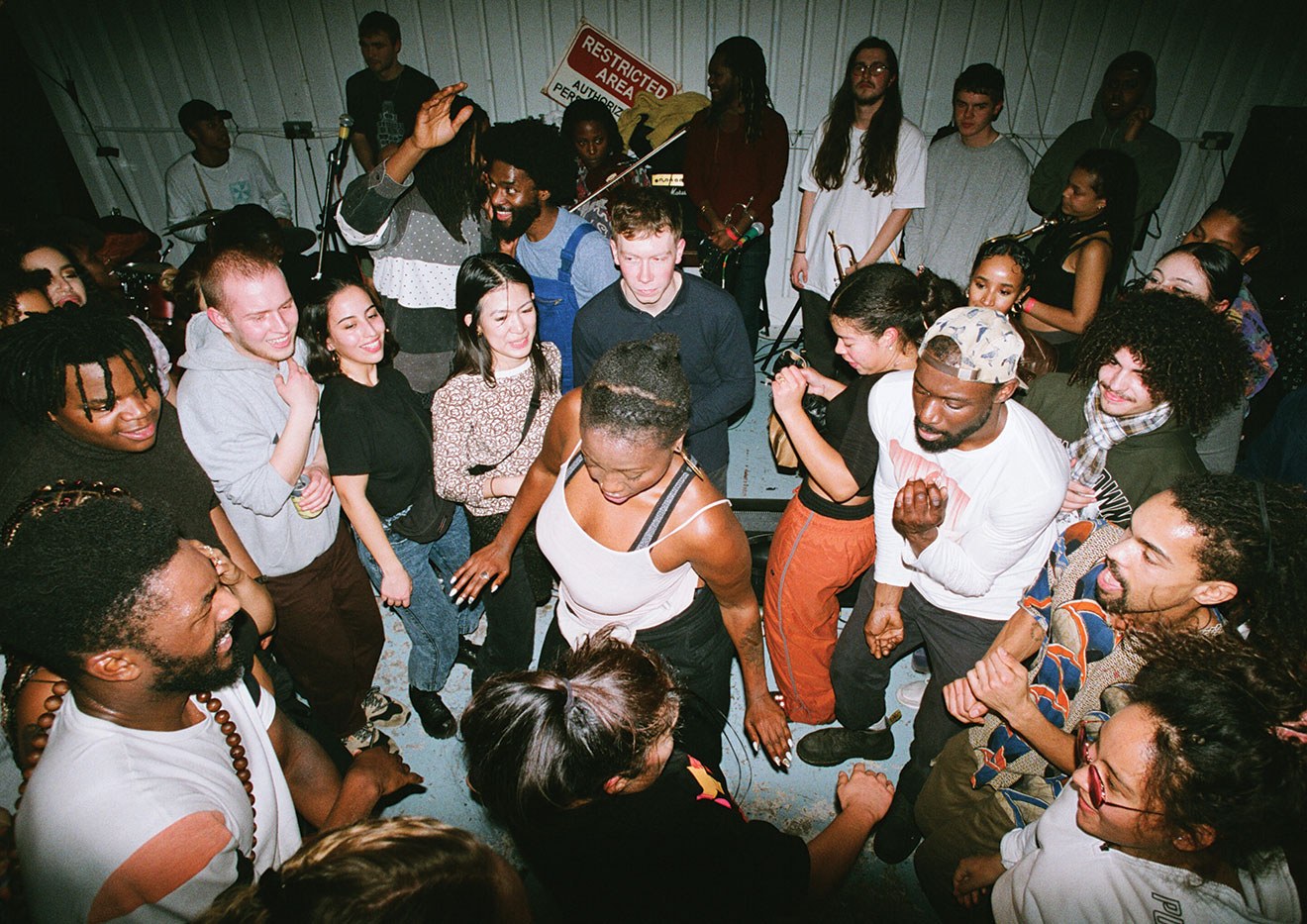 And how they unleash. People bring their own preconceptions to the idea of jazz: as music to listen to, perhaps, rather than to dance to, but this... this is tight. The bass is at proper London soundsystem levels and the bass player switches from upright to synth for the second show of the evening. The drums and the two late-arriving percussionists are high up in the mix and when it locks in, this isn’t beard-stroking cocktail bar background jazz, this is rhythmic sound pressure: pure dance music. In addition to the extra drummers, a full horn section take to the ‘stage’, such as it is, for the second show along with an eye-poppingly adept violinist who makes her instrument sound like a synthesiser.

The feeling in the room is not dissimilar to London raves of the very early 90s. Standing at the back, you can almost see the energy emanate out from the stage and into the bodies of the crowd as the music rises to crescendos, the players coaxing each other back and forth with the dynamic ebb and flow oftheir cosmic-afro-bashment-jazz. Those near the stage pick up on it first and arms rise in the air as they start to whoop and shout, before a wave of euphoria ripples out across the tiny room up to the balcony. There are people with eyes clamped shut, arms raised, bathing in the sonic assault. There’s a dude wandering through the crowd waving a huge flag. People are dancing on the stairs and on the balcony. A group of South London girls are making space for themselves by the bar to dance with true abandon, busting out serious moves. On stage Steam Down look like a 21st century Sly And The Family Stone, multi-gendered and many-hued, all of young London represented.

Before the gig Wayne told us that another reason behind the creation of Steam Down was to have “a space for people to experience music at its purist point of creation, before it’s fully formed in that spontaneous moment, and how that honesty interacts with everybody. I think it can unify people in a powerful way. Ultimately this is all about bringing people together.” Mission accomplished.