The afternoon sun beats down on a kiosk (a small hut, really, with a scattering of plastic chairs) in a public square next to Lisbon’s Avenue Ribeira das Naus, where a squad of guys in brightly coloured shirts and jeans unload a sound system from a white van. Later tonight, a 10-hour party is planned here that’ll showcase live acts and DJs playing an array of African styles. While an accordion is unpacked and a guitarist sits on an amp tuning a Fender, Wilson Vilares, the man behind the Lisbon label Celeste Mariposa, heads to the kiosk’s counter and orders a beer. Nearby, a table of DJs and producers from Lisbon’s Enchufada label are drinking ahead of their Na Surra party, which is due to start later in the day at B.Leza, a nightclub dedicated to African music.

More than a decade since Lisbon’s distinctive blend of African and Latin-influenced electronica first started making waves internationally, the city is seeing a new boom in musical activity. Innovators like DJ Marfox and the live act Buraka Som Sistema, which both made groundbreaking releases in the mid-2000s, have paved the way for a new army of bedroom producers and professional musicians who are continuing down the same path and combining the music ofthe city’s migrant communities with Western electronic sounds in new ways. At the forefront are a handful of artists gaining global recognition for experimental tracks that use elements of genres like kuduro, kizomba and funaná.

One of the producers leading the way is Nidia, who grew up in the ghetto of Vale da Amoreira and started posting tracks on SoundCloud when she was 15 under the name Nidia Minaj, a homage to the rapper Nicki Minaj. The only woman signed to Príncipe, a Lisbon-based label dedicated to raising the profile of DJs and producers from Lisbon’s peripheral ghettos, she has carved out a unique sound with finely crafted polyrhythmic beats and disorientating loops. Her convention-defying 2017 album ‘Nídia é Má, Nídia é Fudida’, which transalates as ‘Nídia is bad, Nídia is dope’, was named as one of Rolling Stone’s 20 best electronic albums of 2017.Nigga Fox, another mind-bending rhythm experimentalist who, like Nidia, grew up in one of Lisbon’s peripheral ghettos, has also seen success on the global club circuit. His genre-scrambling ‘Cranio’ EP was released on Warp in March this year, to critical acclaim, and his output has been used as percussive dancefloor ammunition by Aphex Twin.

Enchufada, which was founded by members of Buraka Som Sistema in 2006 and leans towards a more melodic and produced sound, has also been developing the artists now forming the spearhead of the new wave of Afro-Portuguese electronica. These include the rising star Pedro, formerly known as Kking Kong, who collaborated with label boss Branko on the funky tribal track MPTS, which was released in February and became an anthem for the label this summer. 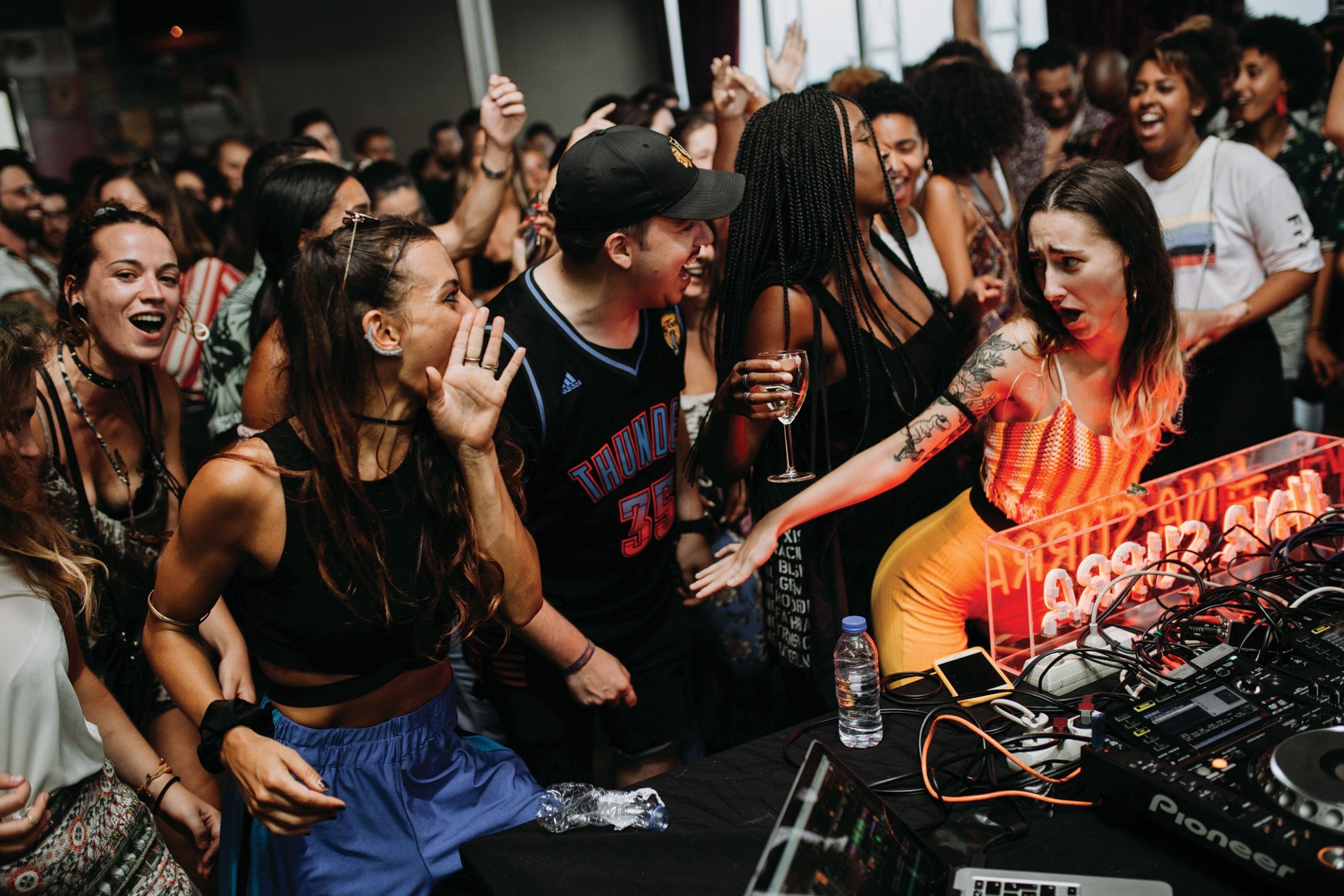 At about 5pm, the Enchufada party kicks off. B.Leza is a small venue in an industrial-looking building with a glass wall along one side, set on a stretch of road by the side of the river. The 300-capacity venue is already full as Pedro takes to the decks. After starting out as a minimal techno producer, Pedro changed direction when he heard Buraka Som Sistema’s first EP, released in 2006 and the inspiration behind his experiments with African and Latin beats. At B.Leza his selection sets the tone for the rest of the afternoon, rapidly cycling through tunes in a set that draws influence from a myriad of genres and continents, and incorporates several of his own productions. These include ‘Chibaria’, a funky afro-bass track that raises the temperature on the dancefloor, and ‘Drenas’, another bouncy tune with a floating synth line and intricate, kuduro-influenced drum patterns.

Thriving music scenes and nightlife, low rents and good weather have prompted a surge in the number of musicians and DJs moving to the city, both from former Portuguese colonies and from western musical hubs like London, Berlin, Paris and New York. The melting pot of influences at this global maritime hub, once at the centre of Portugal’s far-flung colonial empire, has opened many of them to new influences and styles.

The French producer iZem was passing through Lisbon in 2013 when he stumbled on a club night showcasing batida, the city’s ghetto mutation of Angolan kuduro. It led to him settling down in the city, where he has become a key player in the growing new wave of underground afro-electronic music producers in the city. “Every day I speak to more DJs who are moving here,” he says. “At first I intended to stay for a couple of weeks, but the music scene was totally unique. The hybrid approach really grabbed me – the way local producers reference Brazilian and African music, but remain connected to European and American sounds.”

And since moving to Lisbon, iZem has really drawn on the African styles that saturate the city. His ‘Beni Lane’ EP came out on Enchufada in June and includes some of his most frenetic and dancefloor-orientated tracks to date. Both the bubbling title track from his EP, and ‘Frikii’, which features vocals from the Irish-Sierra Leonean afro-futurist Fehdah, stand out during a mesmerising set heavy on layered vocals and weaving in snippets of classic Brazilian bossa nova and US hip hop. 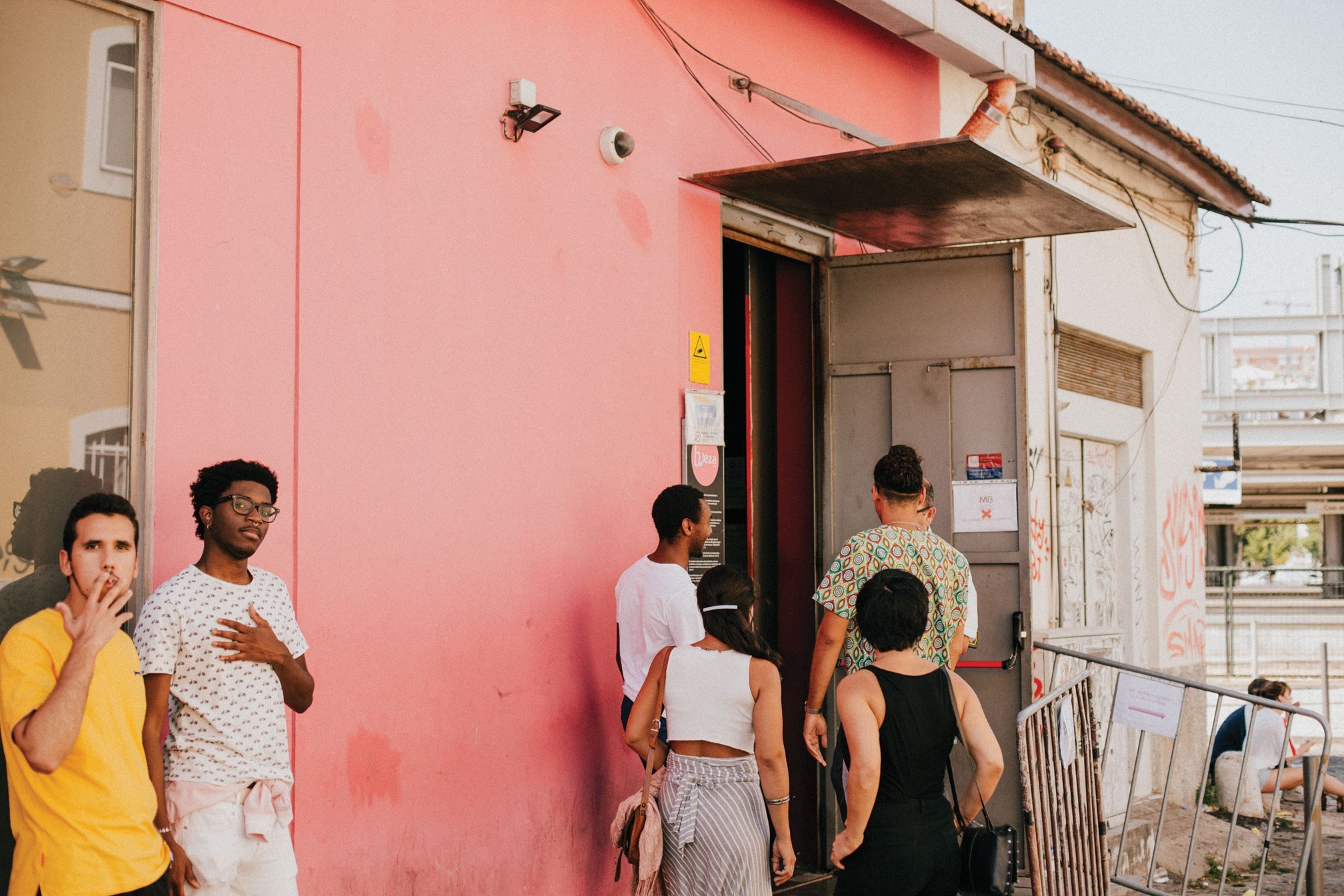 Later, as the sun sets behind the huge, 260’ statue of Christ on the opposite bank of the river, Branko drops his edit of Badsista & Tap’s ‘Na Madruga’ from last year’s ‘Na Zona’ compilation. As the golden evening light shines through the glass wall of the club the tune’s distinctive flute-line sparks hooting and whistling from the now sweat-drenched crowd inside. When the tune drops and the droning bassline kicks in, a circle opens up on the packed dancefloor. In its centre, a man in a red and black patterned Angolan shirt is popping and locking next to a girl in white hot pants expertly winding her waist to the rhythm.

For a moment they are cheered on as they move to the grinding, trap-infused baile funk, then the crowd closes in and they are surrounded by dancers once again. As the set progresses, cheering circles around dancers break out with increasing frequency as the music draws on a influences that include South African gqom and Caribbean zouk. “This is pure Lisbon music,” the man in the patterned shirt tells us later at the bar. “You won’t hear something like this anywhere else.”

One of the consequences of Lisbon’s boom in afro-electronic music has been an erosion of the social barriers between the city centre and the isolated ghettos on its peripheries. For more than a decade DJ Marfox, one of the original pioneers of the batida sound, struggled to get booked by the clubs in the centre of the city. “My music was associated with poverty and crime,” he says when we meet him in his neighbourhood, Quinta do Mocho, 30 minutes by car from central Lisbon. It was only in 2014 when Príncipe started its monthly club night at Music Box that DJs like Marfox started to get regularly booked in the city centre. “Now, DJs from the ghetto are spending months away from home flying all around the world to play in clubs and at festivals. It’s a massive change,” he says.

Increased international recognition of genres that have come out of Lisbon’s ghettos has in turn helped to change the image of neighbourhoods like Quinta do Mocho, according to Marfox. “People are beginning to understand that the ghetto is a place like any other,” he says. As we walk through the neighbourhood we pass residents relaxing on street corners with beers or selling African food on the side of the road, and Marfox points out the large murals that deck the blocks of flats. “It’s just the beginning – but the ghettos have started to become associated with creativity and not just negative things like violence and crime,” he says.

At 10pm the Enchufada party ends and the crowd floods out of B.Leza, with many heading back to the kiosk where the Celeste Mariposa party is still in full swing. The deckchairs are swept aside to accommodate a crowd of dancers, and Vilares is sweating behind the decks as he churns out a heady cocktail of synth-driven funaná from Cape Verde and low-tech Angolan kuduro from the 80s and 90s. “There is so much of this amazing music floating around in the neighbourhoods and ghettos of Lisbon,” he tells us after his set. “It is the music today’s best producers were brought up on.” After years of raiding attics and record collections in migrant neighbourhoods, in 2016 Vilares selected tracks for ‘Space Echo’, a compilation on Analogue Africa that showcased music created in Cape Verde after a shipment of state-of-the-art synthesisers was washed up on the country’s shores in 1968.

The cargo, which included dozens of the latest products from Moog and Korg, was seized by the local government and distributed across the islands, where it sparked a boom in cosmic electrified funk. According to Vilares, the increasing integration of Lisbon’s ghettos and the ongoing flood of musicians moving to the city should help to propel its home-grown afro-latin electronica to new highs in coming years.“ Exciting new music often comes from a combination of isolation, technology, and a clash of cultures,” he says. “It was true in the 70s on the islands of Cape Verde – and it’s true right now in Lisbon.”