I first heard about Human Traffic, naturally, in Mixmag. In 1999, the UK’s club culture was exploding, starting to penetrate the national consciousness, but it was also – paradoxically - like a secret society that met at the weekends. Without today’s digital connection, its disciples would know each other by certain symbols, the equivalent of Oscar Wilde and his green carnation in the lapel. A copy of Mixmag was one of these symbols. Written in a language that took a few issues to penetrate, populated by a cast of characters who never seemed to come down, picking up a copy as a student in Glasgow was like getting my passport to the promised land. An umbilical cord to the weekend, something to sustain me until Friday night came around again.

The June ’99 issue (with a cover that asked ‘200 days to go to the millennium, where will you be?’) screamed ‘HUMAN TRAFFIC: WHY EVERY CLUBBER MUST SEE THIS FILM’ above the masthead, had a feature inside that announced ‘It’s fucking great!’ and carried recommendations from the likes of Boy George, Jon Pleased Wimmin and Danny Rampling. The rumour at the time was that the cast had actually taken drugs to make the club scenes even more authentic.

Of course I saw it at the cinema the week it came out. And it was fantastic. The cast was incredible, particularly John Simm, all wiry intensity as Jip, Lorraine Pilkington regal as Lulu and of course Danny Dyer’s Moff, daft as a brush but with a wounded charisma that leapt off the screen. It’s no wonder some of them went on to be household names. The soundtrack was equally stacked, though it did have the strange effect on me of not being able to hear Brainbug’s ‘Nightmare’ for years without thinking of erectile dysfunction. 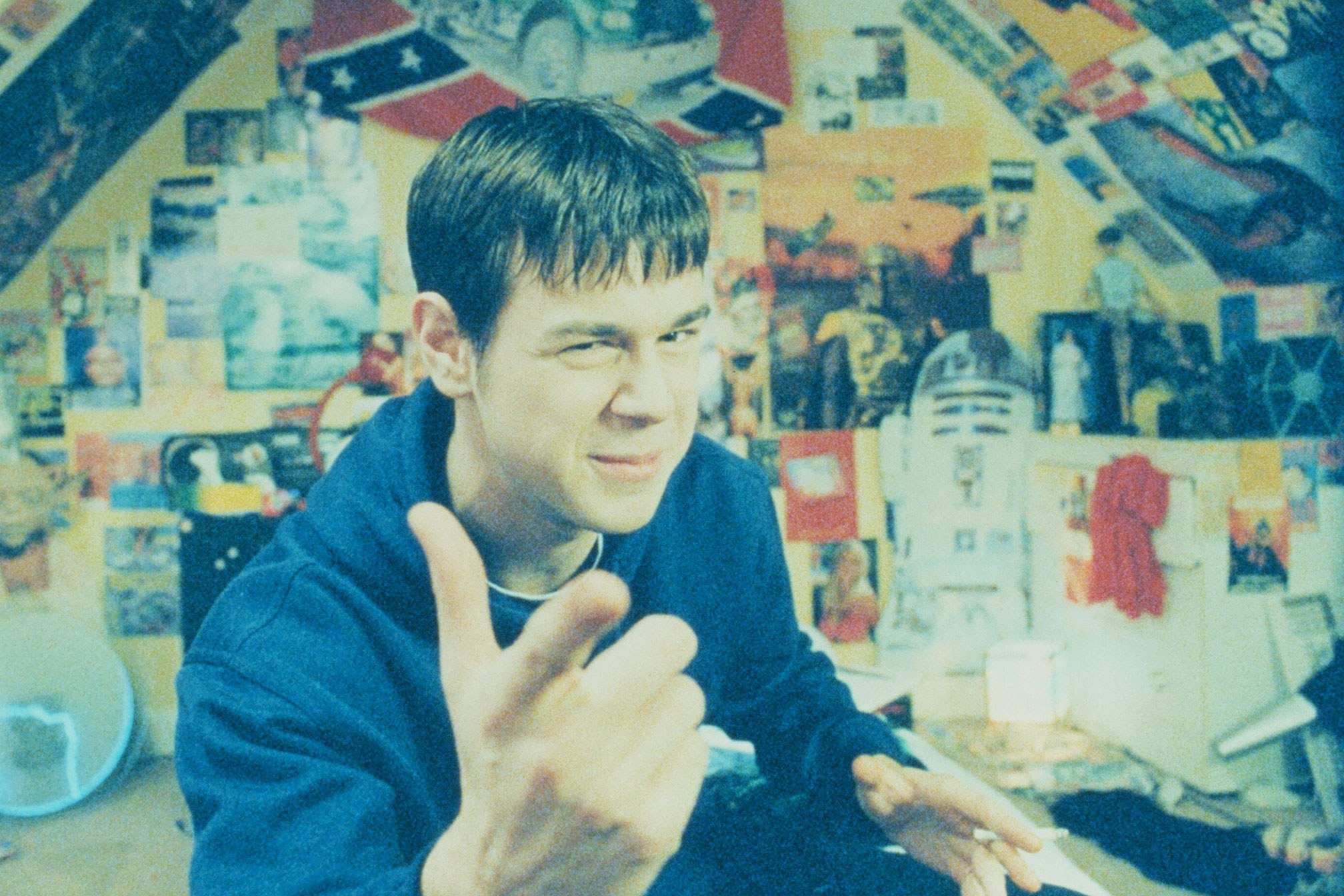 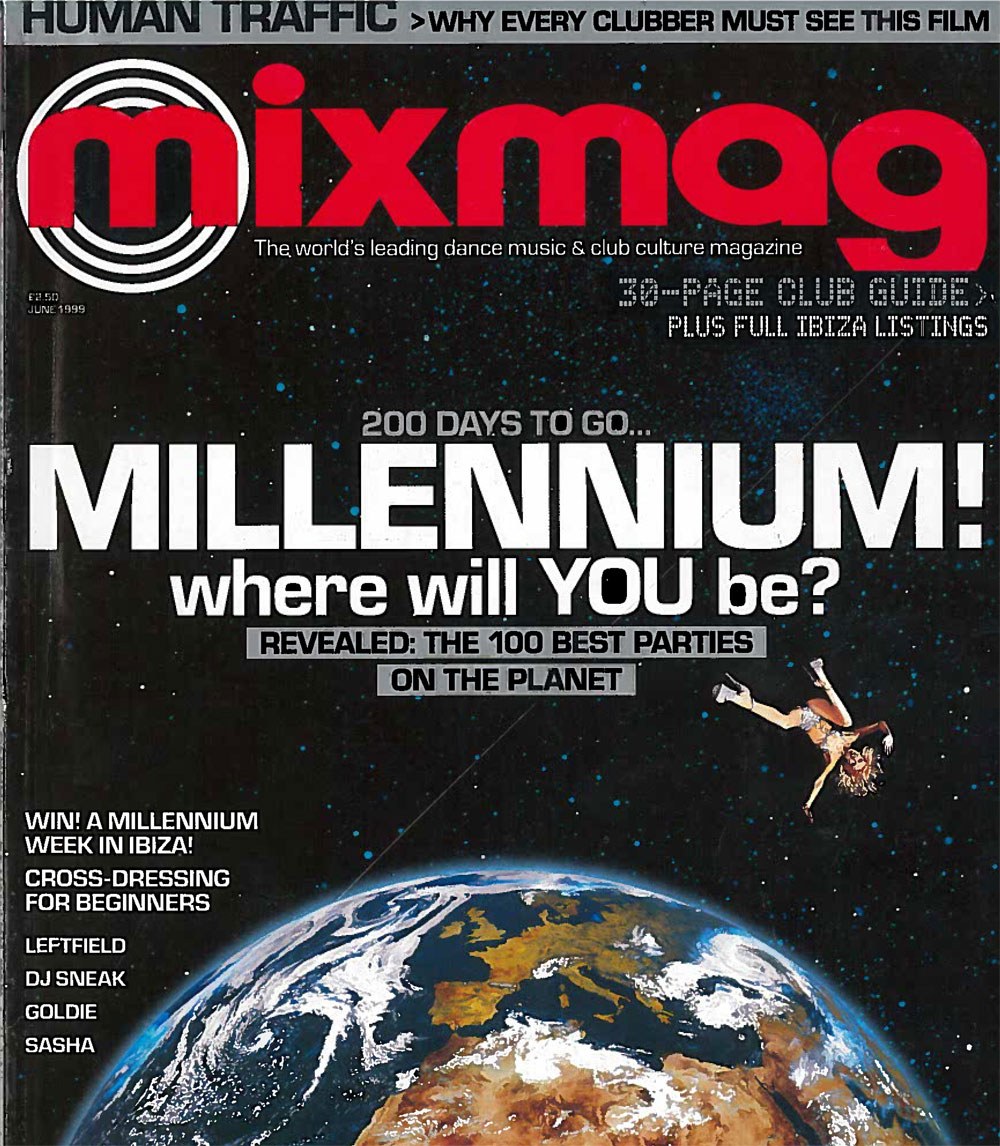 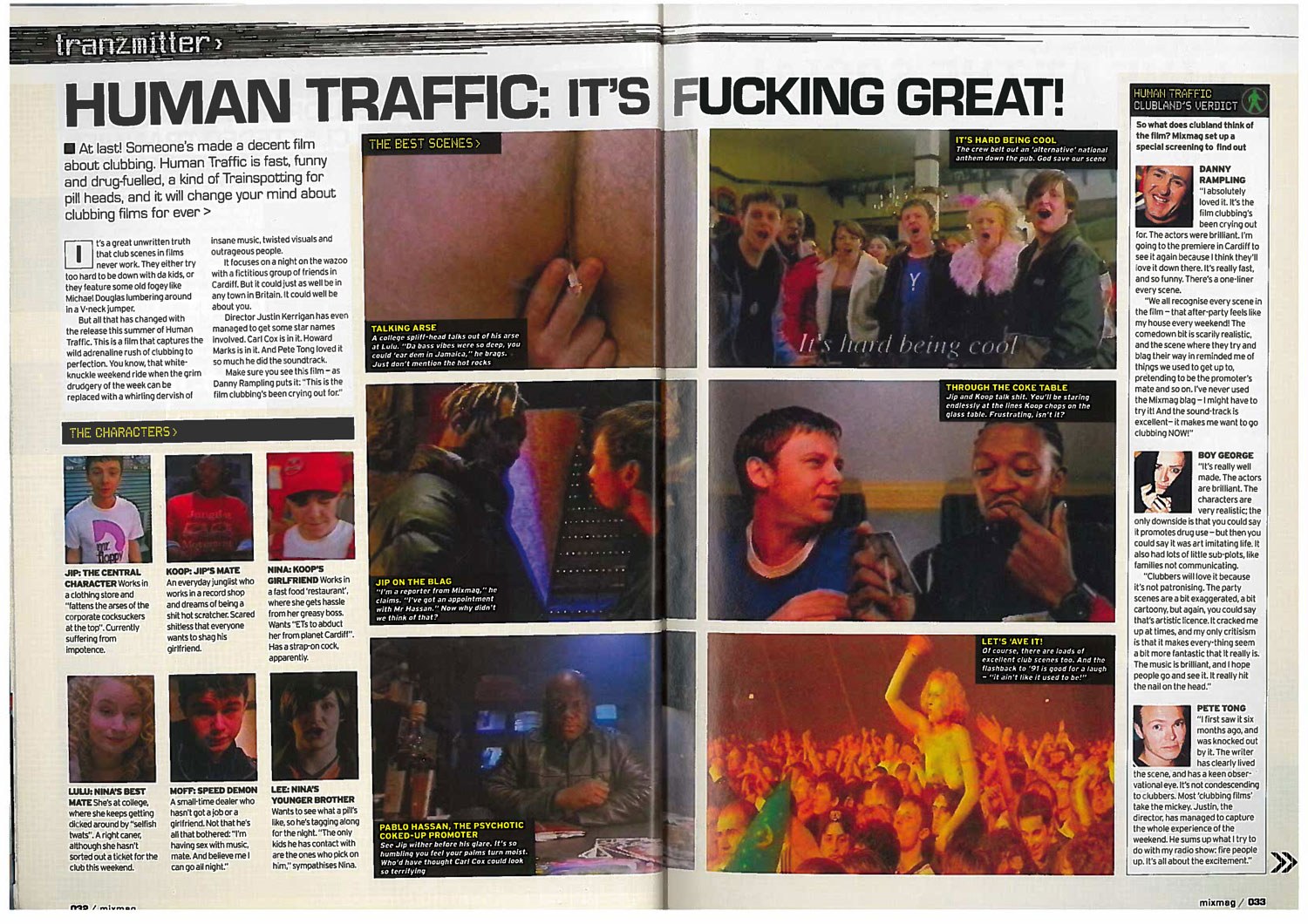 What I remember most, though, is the excitement of seeing the clubbing experience, of seeing our culture, up there on screen. Not as a historical artifact from some faraway, lost-to-the-ages cultural moment like Woodstock or Studio 54 or even Acid House. This was 1999, five years after the criminal justice act (acknowledged in the intro, in a sort of Watchmen style potted history) had sounded the death knell of rave culture, and this movie was about High Street, mass market clubbing: provincial, non-elitist, viscerally exciting, and at its peak. Somehow they got this film made before the thing it portrayed went out of date – in most towns in the UK you could step out of the cinema at 10pm and straight into it. That the film was set in unfashionable Cardiff was a masterstroke, and made it far more relatable - to me at least - than anything set in London could ever be.

The ‘simple day/night in the life of’ plot is straight out of every teen movie ever written. The first part of the film, setting up the misery and pointlessness of the working week via magical realism – Nina’s Weinstein of a boss, sperm-covered and slimy, Jip’s corporate shafting at the hands of his - echoed the iconic ‘Reason Why’ ad campaign going on at the time for Cream in Liverpool (‘It’s why I go to work all week’). At least Moff (drug dealing), Koop (record store) and Lulu (student) seemed to have some life outside of the weekend – for the other pair, the week is the shadow life. The weekend is the only time they are truly alive. Plus ca change: these days they’d be worse off, on zero hours contracts.

Some things do change of course, and it’s always a fear, revisiting your favourite 90s movies, that they might now make you wince. Human Traffic holds up better than most. The female interactions pass the Bechdel test, and the female characters, though not written with the complexity of the boys, are also a lot less passive. While it takes a cathartic night out (or a comedown) for Jip and Moff to start trying to deal with their demons, Nina and Lulu begin the film by throwing off their own shackles – Lulu in the form of her useless cheating boyfriend, and Nina walking out of her job and the sexual harassment of her slimy (literally) boss. 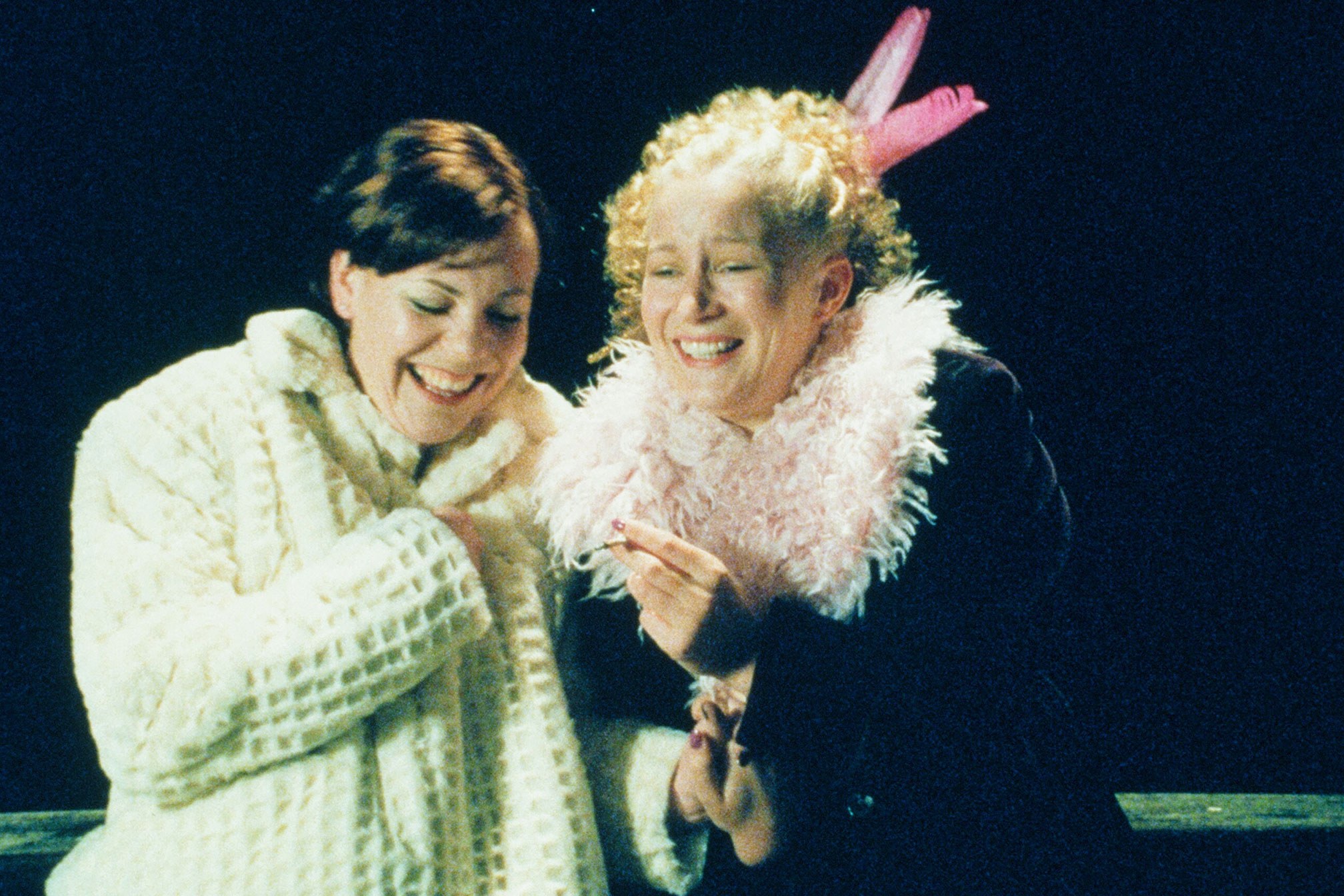 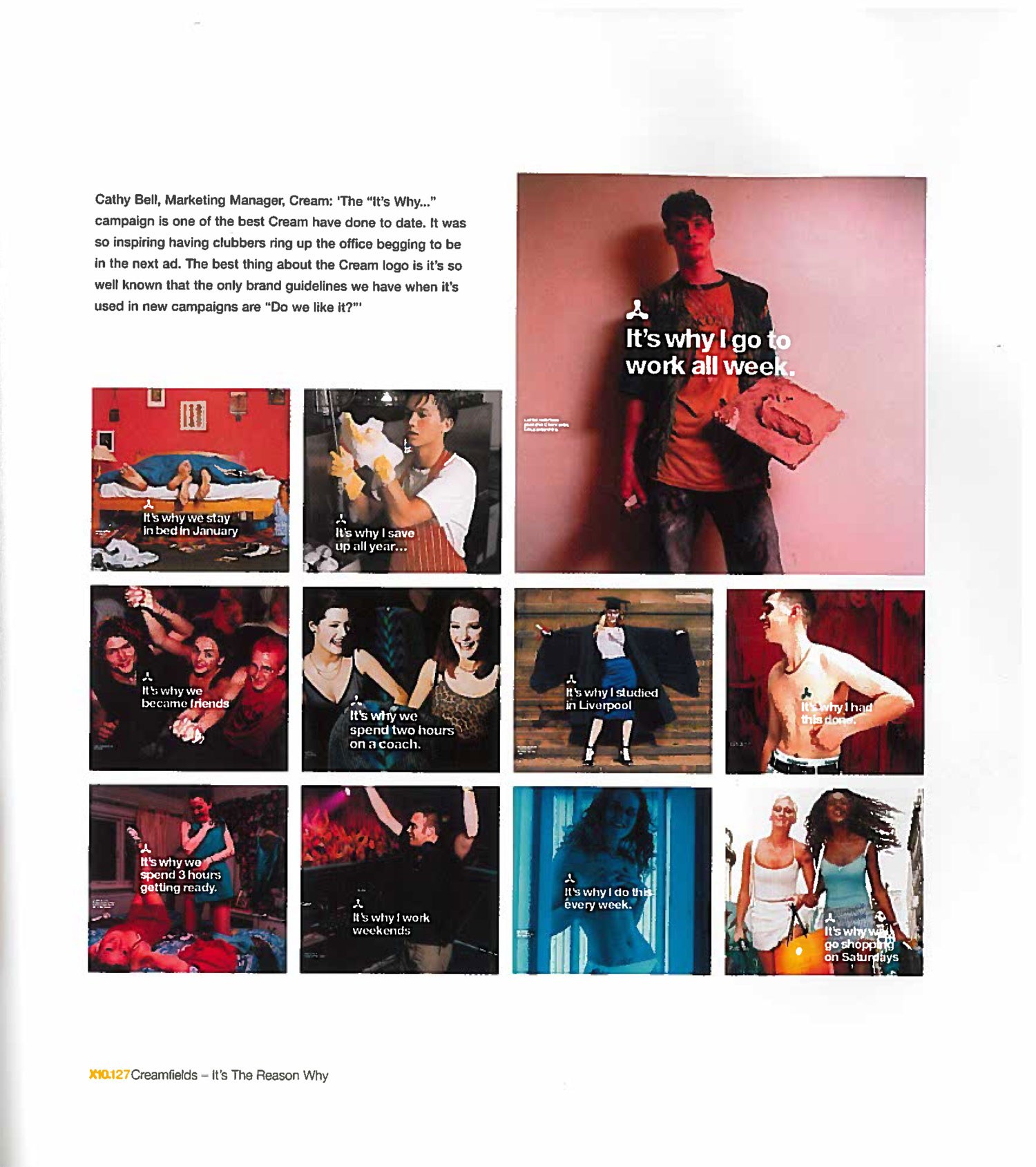 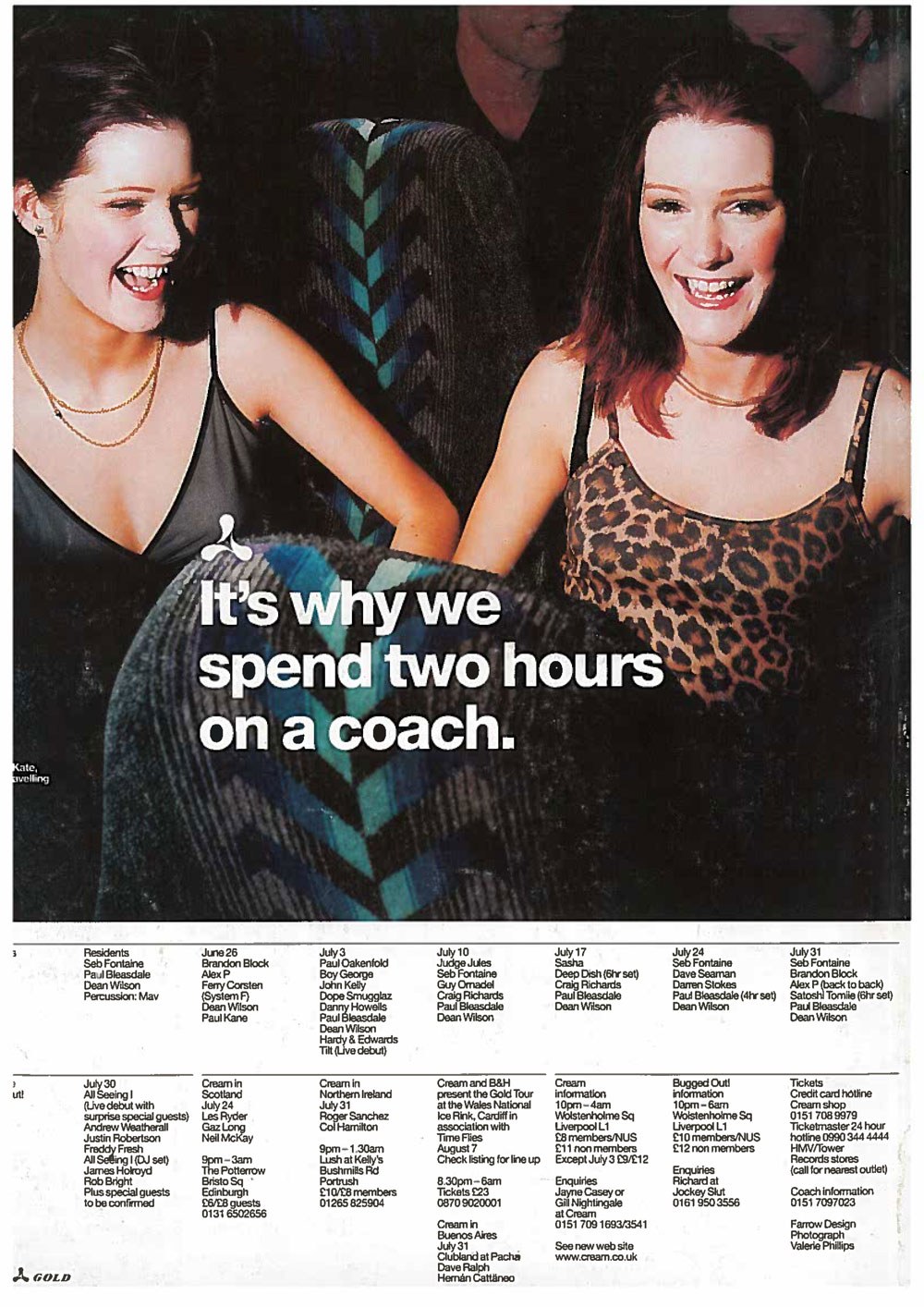 Our male heroes are fucked up, but they are the post-ecstasy generation, able, to an extent, at least to recognize and talk about their feelings and vulnerabilities – Jip’s impotence, Moff’s alienation and loneliness, Koop’s sexual insecurity. Lad culture, which would take its toll on clubbing (and indeed on Mixmag), had not yet leached its pollution fully into our world. One thing that does stand out is Koop’s – admittedly unvarnished, but also unaddressed - toxic jealousy. I don’t remember screaming ‘run a mile!’ at the screen when I first watched him raging at Nina for ‘flirting’ with other men in a way that looks like a prelude to domestic abuse. The gang jumping in a car with a driver ‘pilled oot his heid’ terrifies me as well. That aside, the attitude to drugs still seems pitched pretty perfectly - MDMA might have brought this gang closer together, might have broken down their emotional barriers, but it’s also starting to fuck with a few of their heads. And perhaps fittingly, the second half of this movie has always seemed an anticlimax, just like the second half of a good night out. Indeed I watched this movie a dozen times back in the day, and I still couldn’t remember how it ended, though that makes it even more of a bonus to hear Jo Brand as the voice of God.

Watching it back, twenty years on, I found Human Traffic an incredibly powerful reminder. Not that clubbing was better back in the day (the film itself acknowledges the tyranny of nostalgia, with two pilled up idiots - one of whom is the Walking Dead’s Andrew Lincoln, or ‘Egg!’ to my 90s crew – reminiscing futilely about the glory days of ’91). Not of my own first tentative steps into the clubbing world either, blagging my way in to / getting chucked out of Glasgow’s nitespots (of course I tried the Mixmag thing, well before I had any right to).

It was the section at the start of the film where the gang are getting ready to go out, sorting out their schedule (by landline, and with a lot of indoor smoking) that really got me. It communicates the excitement of that time when the night is as yet undiscovered, a promised land of possibilities and expectation stretching out ahead. It reminded me that that part was always my own favourite back in the day – the build-up, assembling a team of friends to take on the night and enjoying their company just as much as the DJ or the production or the million other things that get in the way. 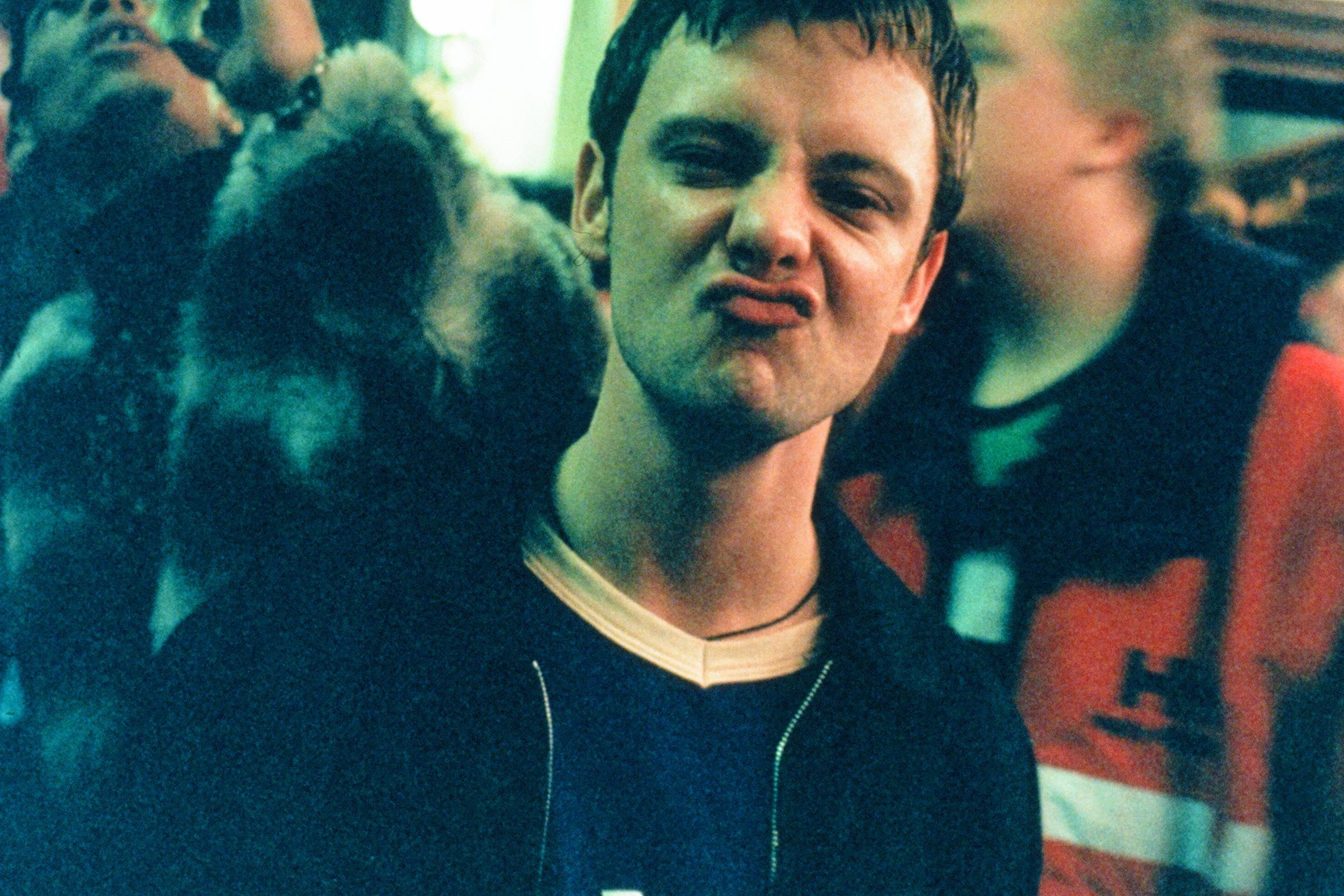 In my job, going out for a living for years now, spending too many nights with a mission in mind and never having to worry about buying a ticket, it’s possible to lose that sense of anticipation, lose sight of the simple fact that the journey and the friends are every bit as important as the destination. Watching this movie again reminded me how important it is - as a clubber and as an Editor - to keep that feeling, at the forefront of my mind, now and for always. As Jip says on the phone to Lulu, in a scene that still gave me goosebumps just this morning: “All your best friends, who love you: they all want you to be there. Come on, we’ll have a fucking blinder!” The fashions and the technology may have changed (though actually Moff’s baggy branded sportswear look is very 2019), but club culture as community and possibility never will or should, and those themes are the reason why this film still works 20 years on.

Having said that, watching this again, it’s another line that resonates with me most on a personal level. Nina this time: “It’s not like we’re gonna be doing this forever. I mean, we’ll all get bored of it eventually.” Speak for yourself Nina. I SAID NICE ONE BRUVVA!!