The story behind Hot Since 82’s new album is heartbreaking: the traumatic life experiences, addiction and suicide of his best friend. But by talking about it, and with the album proceeds going to mental health charity MIND, Daley Padley hopes he can help others

Daley Padley appears to be a man with everything: an effervescent Yorkshireman with the jet-setting lifestyle of a globally in-demand DJ and hit-making producer. As Hot Since 82 he’s enjoyed huge success all over the world, playing and creating house and techno for big rooms and peak times.

One of Ibiza’s favourite adopted sons, Daley built his reputation on epic, sprawling sets, a skill he learned 15 years ago in the bars and clubs around his home town of Barnsley. It was here he met Paul ‘Coop’ Cooper, a towering bon viveur who was to become Daley’s travelling companion, best man to be, and trusted confidante.

“We were thick as thieves,” says Daley of his ‘wingman’, a friend who was always there for him – like the time Coop scooped a fainting Daley from the DJ booth after the Knee Deep In Sound label-head perforated an eardrum following a riotous 12-hour set at Montreal’s world-renowned Stereo.

But as he prepares to release ‘8-Track’, his first album-length collection of Hot Since 82 material, Daley Padley is still trying to cope with Coop’s death from suicide in May 2017 at just 36.

The suicide figures in England and Wales are striking. Nearly 6,000 people took their own lives in 2017 – an average of 16 people a day. The suicide rate is three times higher for men than women, and it’s the most common cause of death for men aged 20 to 49.

Unsurprisingly, the album hints at a more reflective approach than Hot Since 82’s standard club bangers, and is inspired by Coop’s story, with all proceeds going to support mental health charity, MIND. Daley opened up to Mixmag about the tragedy of his best friend’s death, its aftermath, and the lessons he has learned. 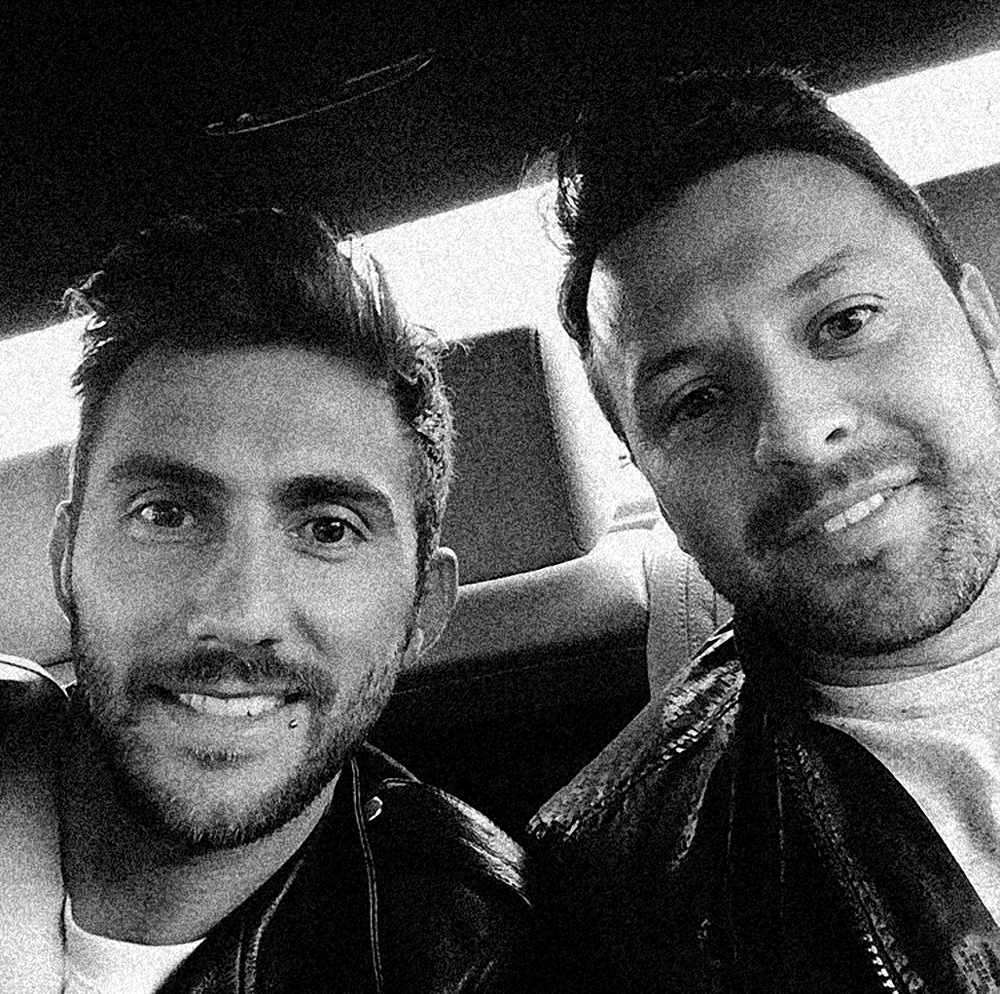 What kind of friend was Coop?

“Nearly everyone has that special friend that you always call first. Paul was that guy. I’m not sure what people think of me – I’d imagine that I come across as being friendly, always smiling – but actually, I can be quite introverted. This job can be demanding, especially the social side. Yet no matter how tired I’d be, I always had time for Paul. He demanded nothing of me.”

How did you meet?

“Coop used to be a police officer in some of the most run-down areas of south London. He saw some traumatic things in the five or six years he was in the force – dead bodies, stabbings, shootings – and I think that really hurt him. I’d describe Coop as a gentle soul. He eventually left the force due to depression and that’s when I met him, in 2005, when he was on sick leave. I’d always DJed in my home town (Barnsley), knew everybody, but then this new group of people appeared. Paul and I just hit it off. He had the most beautiful smile. Intelligent, and so quick-witted. We called him the Big Bear because he was a cuddly lad, always wanting to give you a hug. I never had that kind of male interaction growing up, as my dad wasn’t there. I’d be like ‘Ooh, gerroff!’, because I wasn’t used to it. But I’d do anything for one of those hugs now.”

Where were you when heard that Coop had died?

“I’d just landed in Frankfurt, turned my phone on and it started lighting up like a Christmas tree. I didn’t answer at first, but 20 seconds later my fiancée called. She said ‘It’s Paul…’ and burst out crying. And I just knew. I froze. I put the phone down, couldn’t function. I felt like all my emotions had left me – couldn’t cry, anything. I made my way back to Leeds to figure out what had happened. To be honest, it took me about eight months to figure it out.”

This was a crucial time in your life, wasn’t it? Summer 2017 and your first ever residency at Pacha in Ibiza – Labyrinth – was about to kick off.

“Yes, two weeks after Coop died. I had all this responsibility but I was mourning my best friend at the same time and I couldn’t handle it. I was partying a lot, drinking too much. I was heading up this new night at Pacha, trying to be normal. My friend had lost his life, and I completely lost my head. I wasn’t talking to anyone, not even my partner.”

What have you learned?

“That the happiest-seeming people can be hurting inside. I’ve learned that you should never be too shy – or too proud – to put your arm around someone and ask if they’re alright. We don’t talk so much, men; we don’t let our feelings be known. And we don’t want to go to the doctor. But it’s important to speak up. We need to teach people that there is help and that we aren’t a failure if we go and seek it, whether that be medication or whatever it is. You don’t know who’s hurting around you. So that little hug, that little word, that smile… well, it could save someone’s life.”

Have you watched the Avicii documentary?

“No, but so many people have told me to. Thing is, today you are not just a DJ. You need the full package: DJ, producer and have a presence about you when you perform. There’s a lot more to it than going into a dark, sweaty corner of a club and just playing records. I finally came to my senses at the end of that summer [when Coop died] and said to myself, ‘Daley, why are you doing this to yourself?’ That’s when I stopped everything and went clean. And when the season ended, I had a full year off Instagram. There are a lot of positive things about social media, but it can also be very cynical and a bit tatty, can’t it? You’re selling this image. You have to go here, drink here, drive this, own this watch. It’s quite sad.”

Tell us about the tattoo on your left forearm...

“It’s just a little sailing boat, stencilled on. I had some beautiful artwork for my album done of waves and a little boat on it. Some waves are calm, some heavy. Three days before Paul passed, I was shopping in Leeds and got a message from him out of the blue: ‘Can we meet up, been too long’ etc. I wanted him to just explain what was up. And he replied that he couldn’t go into it, that life was too short: ‘Just remember, this ship never sinks.’ The ‘ship’ he meant was friendship. It was the last text message I got from him. People have said that people who’ve made their mind up to end their life have a few days of tranquillity, but I still feel guilty: maybe I could have saved him. That will always lie heavy on my heart. It’s something I have to live with.”

Tell us why you’ve made the decision to give the proceeds from your new album, ‘8-Track’, to the mental health charity MIND?

“It was Paul’s parents’ charity of choice. There are people out there who want and need help. I wanted to contribute to that. The album itself is centred around mental health. I just wanted to know that I had contributed something, and hopefully the money will help save lives. I want people to enjoy the music and understand where it has come from – and the more we raise the better.”

'8-Track’ is a little more subdued than what we expect from Hot Since 82 – it’s music with a message, isn’t it?

“For me, making it was part of the process of healing. I was writing for Paul, writing for myself and for people to gain something from it. It’s probably not something that you’re used to hearing from me. Some kids just want big basslines, banging records, 5:AM main-room stuff, but this wasn’t about that. There are one or two records that you could probably play peak time, like ‘Tilted’, in which I tried to capture the mood of Ibiza, because that was a place that was an important part of my and Coop’s relationship. This was therapy for me. Is it the best work I have ever done? I don’t know. Is it the most personal work? Definitely.”

Are any of the tracks directly about Coop?

“There’s a secret track on the long-player, ‘Rest Your Head’. I wrote that the week after he died. I didn’t want to listen to a dance beat then. I had a picture of Paul stuck on the monitor – it’s still there – and I was staring at it, wondering how you write to that feeling. So it’s more of a broken beat, dubsteppy vibe. It hopefully captured the sense of loss behind the project.”

Where are you right now as a person?

“I have more clarity than I have ever done. I’ve changed a lot in the past year: more sensible, more compassionate and I’ve got more time for other people – and that’s more important than my job, really. Things have happened lately that make me think I really do have someone watching over me.”

‘8-Track’ is out on Knee Deep In Sound on July 26. Every year, one in four of us will experience a mental health issue. MIND believe no-one should have to face a mental health problem alone and offer support and advice to anyone who is suffering. See www.mind.org.uk for more

Hot Since 82's Labyrinth took Ibiza's good times to Tobacco Dock
Hot Since 82 b2b La Fleur in The Lab LDN
Mind dimension: DJs are finally opening up about mental health
Get the best of Mixmag direct to your Facebook DMs