Take Ibiza’s newest state-of-the-art superclub, stir in three of the biggest tech-house acts on the planet, garnish with thousands of wild-eyed ravers under the age of 25 and what do you get? Hï Ibiza’s colossal new Tuesday night residency, BODYWORKS, headlined by a triumvirate of superstar residents: Solardo, Fisher and CamelPhat.

We arrive on the stroke of midnight. It’s normal for parties in Ibiza to start slowly, but tonight the side rooms are already packed with ravers. The crowd are noticeably young and giddy. It looks like 75 per cent of the attendees are from the UK; it looks like 75 per cent are under the age of 25. Boys in designer sneakers and branded socks sit in a tepee tent smoking cigarettes while a crew of girls wearing neon dresses stand outside the entrance, chatting. Bum bags filled with foreign notes, chewing gum and hotel keycards are zipped and unzipped, zipped and unzipped.

Pushing through the crowd, stopping to talk now and again, it quickly becomes apparent just how much of an impact Solardo, Fisher and CamelPhat are having on dance music’s next generation. “Going to a tech event in Manchester is what you have to do when you finish high school,” says Molly, 19. “Get yourself a fake ID and buy a ticket to one of the big events. That’s what I did. That’s what everyone does!”

“Literally everyone goes to The Warehouse Project,” adds Grace, 19. “Tech-house has become such a big thing that people go there even if they don’t like the music.”

“I remember hearing Solardo for the first time at Parklife,” explains Darcie, also 19. “I was immediately hooked. After that I started to discover other DJs and other sounds. Then, before I knew it, I was raving at Awakenings. Now I’m spending five days in Ibiza partying at Hï and Ushuaïa!”

Like many of the teenagers visiting Bodyworks tonight, Molly, Grace and Darcie are devoted tech-house fanatics. They’re wildly talkative and constantly interrupt each other in a frantic effort to debate their chosen subject, delivering a rapid, almost bewildering exchange of insights on everything tech-house related. They may not be wearing furry boots, but their passion for clublife reminds us of the 90s Cyber Kids, those fun-loving, luminous party freaks who were jacked into a social movement that not only defined their weekend but also their lives. Likewise, Molly, Grace and Darcie are purist ravers in the making. And just like those Cyber Kids of yesteryear they consider themselves part of a collective movement – a movement they refer to as ‘tech’.

By 1am the party is already going off in the Theatre. The line-up is so hot that Heidi is on warm-up duty. Her output is chugging and groovy. She pays homage to the old-school by way of Green Velvet’s ‘Preacher Man’, before shifting gears into the wonderfully rolling ‘Iz Diz Houz?’ by Bjorn Wolf.

At 2:30am CamelPhat step into the booth. It’s a booth they know well, having supported Eric Prydz here in 2018. Last summer they had to fill the stylistic gap between Prydz and Cristoph, which meant switching up their usual style somewhat. But this year the shackles are off, and we’re getting to hear what CamelPhat are really all about. Their sound is euphoric, progressive and reassuringly chunky. When it comes to creating tech-house journeys CamelPhat do it better than most. Recognisable classics like ‘How’s Your Evening So Far?’ by Lil’ Louis merge with Simon Shaw’s hip-shaking acid monster ‘Cut My Hair’ and straight-up techno cuts like Satoshi Tomiie’s ‘Resonant’.

“It’s the launch party tonight, so we thought the sound needed to be quite epic,” CamelPhat’s Dave Whelan explains after he and Mike Di Scala exit stage left. “We felt as if everyone needed to go away with the memory of at least one record in their mind. But at the same time, we learned last year that in a room like the Theatre you have to play a bit harder and heavier, more progressive, more techno. We were definitely aware of that. Ultimately I think we did OK, because as you can see everyone is having a great time! This new generation of clubbers have come into the scene and they’re really connecting with the music. To be fair, they’re coming in hard. They’re into Drumcode, Adam Beyer, Alan Fitzpatrick, Amelie Lens – those guys are like superheroes to this new generation, which is amazing. It can only be good thing for clubland that these kids are becoming obsessed by the more intelligent extremes of dance music.” 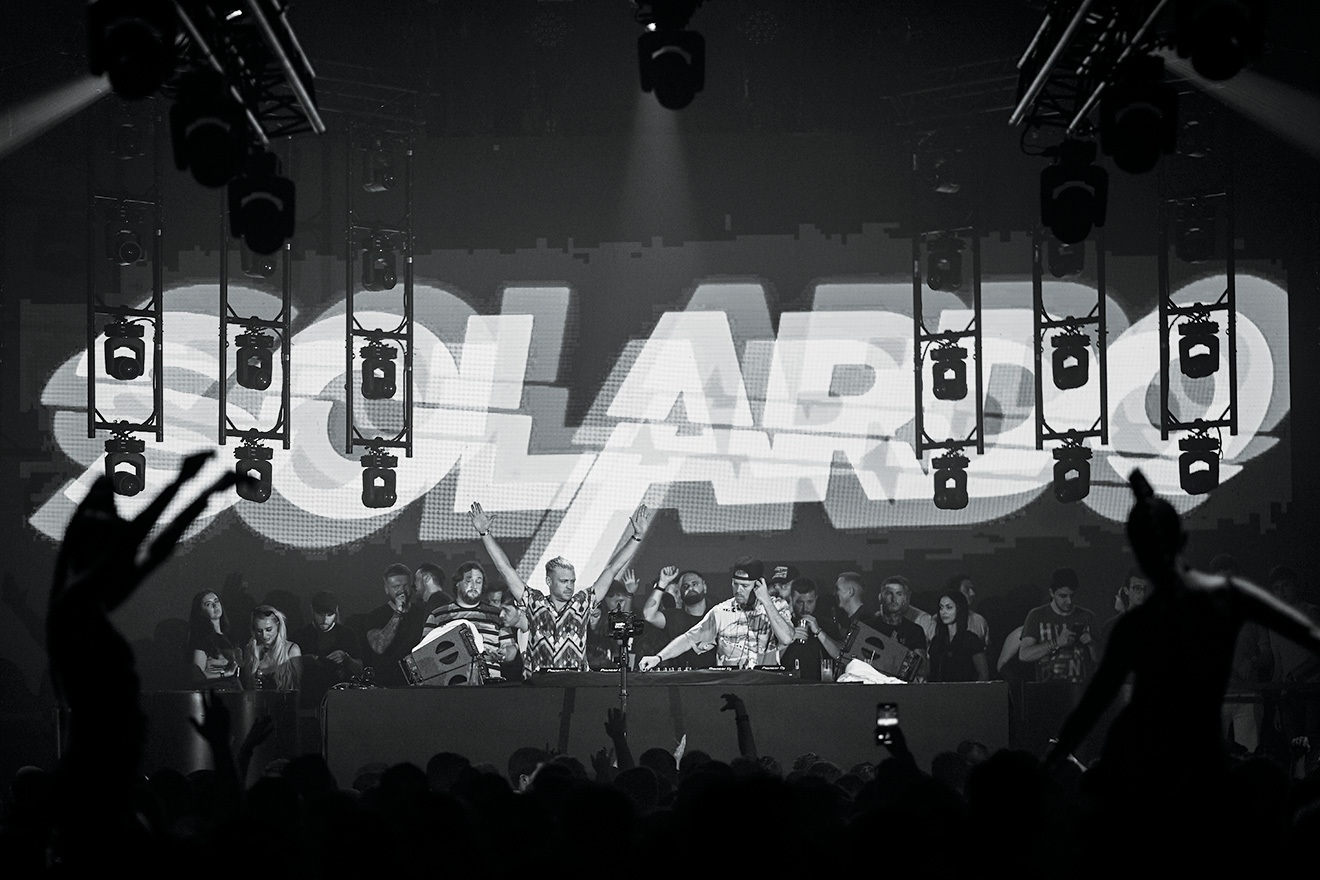 Over in the neighbouring Club room, Aussie tech-house phenomenon Fisher is centre stage. Like his personality, Fisher’s sound is boisterous. In terms of technique, he doesn’t stay long in the mix. When Fisher gets bored of a tune he simply rams in the next accessible, infectious banger with expert aplomb, often accompanied by yet another shot of hierbas or tequila or whatever it is he’s drinking. Clearly Fisher is living in the now. He’s as wild and crazy in the flesh as his Instagram account suggests. And the crowd here at Hï Ibiza love him for it.

“I think everyone feels as though Fisher is just part of the gang,” says Neil, 22, from Milton Keynes. “He just doesn’t give a shit. He’s one of us. That’s why there’s such a bouncin’ afterparty atmosphere in here.”

Everyone we ask is in total agreement. They follow Fisher’s mad antics on social media (Follow The Fish TV) and consider his persona as accessible as his music. It’s a hot combination that’s seen the ‘Losing It’ star break out to become one of the most in-demand DJs on the planet over the course of the last 12 months. And looking out over the Club room tonight, which is rammed to bursting point, ravers hanging off the girders, Fisher’s upward trajectory doesn’t look like levelling out any time soon.

4:30am and we’re back in the Theatre. Mark and James of Solardo – wielding giant basslines and catchy vocal loops – are the last of the big hitters to appear. Like Fisher, they had a hugely successful 2018. In Ibiza, their versatility behind the decks saw them score multiple bookings across the island for different promoters. In addition to performances at Hï and Ushuaïa, they were also booked to perform for Circoloco and Paradise at DC10. Now they have their very own Ibiza residency, and perform in the US at least once a month. But like CamelPhat and Fisher, Solardo’s accomplishments are no fluke. They’ve had to work extremely hard to obtain everything that’s come their way.

“Three years ago when nobody was really going hard in Manchester, we were really pushing it,” Mark explains. “A key show for us was playing The Albert Hall in 2016. We sold 2,800 tickets, despite being relative unknowns. To be fair we’ve never really looked back.”

“Neither has the scene,” James adds. “It’s mad what’s going on. It’s so nice for us to see this shift in musical taste. Even the North American festival market is starting to get its head around these sounds, which is great for us.”

It’s also good news for the underground dance movement in general, because thanks to DJs like CamelPhat, Solardo and Fisher, and forward-thinking promoters like Hï Ibiza, there’s now a fresh supply of young clubbers entering the scene. And it’s a scene that looks and feels vastly different to how it looked and felt even three years ago. Tech-house is now rivalling EDM as a principal gateway into clubland. That’s a given. But if the young rave devotees we partied with at BODYWORKS are anything to go by, in the coming years tech-house might just knock EDM off the main festival stages, too.

A new legacy: Hï Ibiza opening proves the superclub isn't messing around
The 10 best new parties in Ibiza in 2019
Gotta get up: Meet the dancers of Ibiza
Get the best of Mixmag direct to your Facebook DMs