Goldie and James Davidson are sitting in a Japanese tea-house in Islington discussing their collaborative project, Subjective.

“When I first work with producers and engineers I like to test them, to break their ego right down,” says Goldie. “It’s about pushing them to the limits of their capabilities. The first time I worked with James I set a massive booby trap in the form of ‘Prism’ [from Goldie’s ‘The Journey Man’ album], a track that goes from three-four to four-four, with time-stretched cymbals, live processed drums… but the trap didn’t work.”

“I took the cheese and ran away,” Davidson laughs.

“I came back and he was just licking his lips, cheese toppings everywhere,” laughs Goldie.

“I may have been a bit daunted before I worked with Goldie, but it’s like a skating competition,” says James. “If you do the first round without stumbling, you gain confidence – and feel unstoppable.”

The mousetrap analogy, and their sparring, capture the friendly energy at the heart of their joint project Subjective, the first fruit of which is the album ‘Act 1: Music for Inanimate Objects’, a mellower affair than anything either producer has made in the past, its spirit somewhere between Brian Eno and Soul II Soul, underlaid by progressive drum ’n’ bass complexity.

“I wasn’t going to do another music project after ‘The Journey Man’,” says Goldie, “but we’d booked two sessions for that, we worked really well together, completed the album quickly... so we thought, ‘Fuck it, let’s use the other session to start a new project! Let’s get all Eno on this!’ It’s like some eighties project, the Tom Tom Club or David Byrne: do something else, something completely different.” 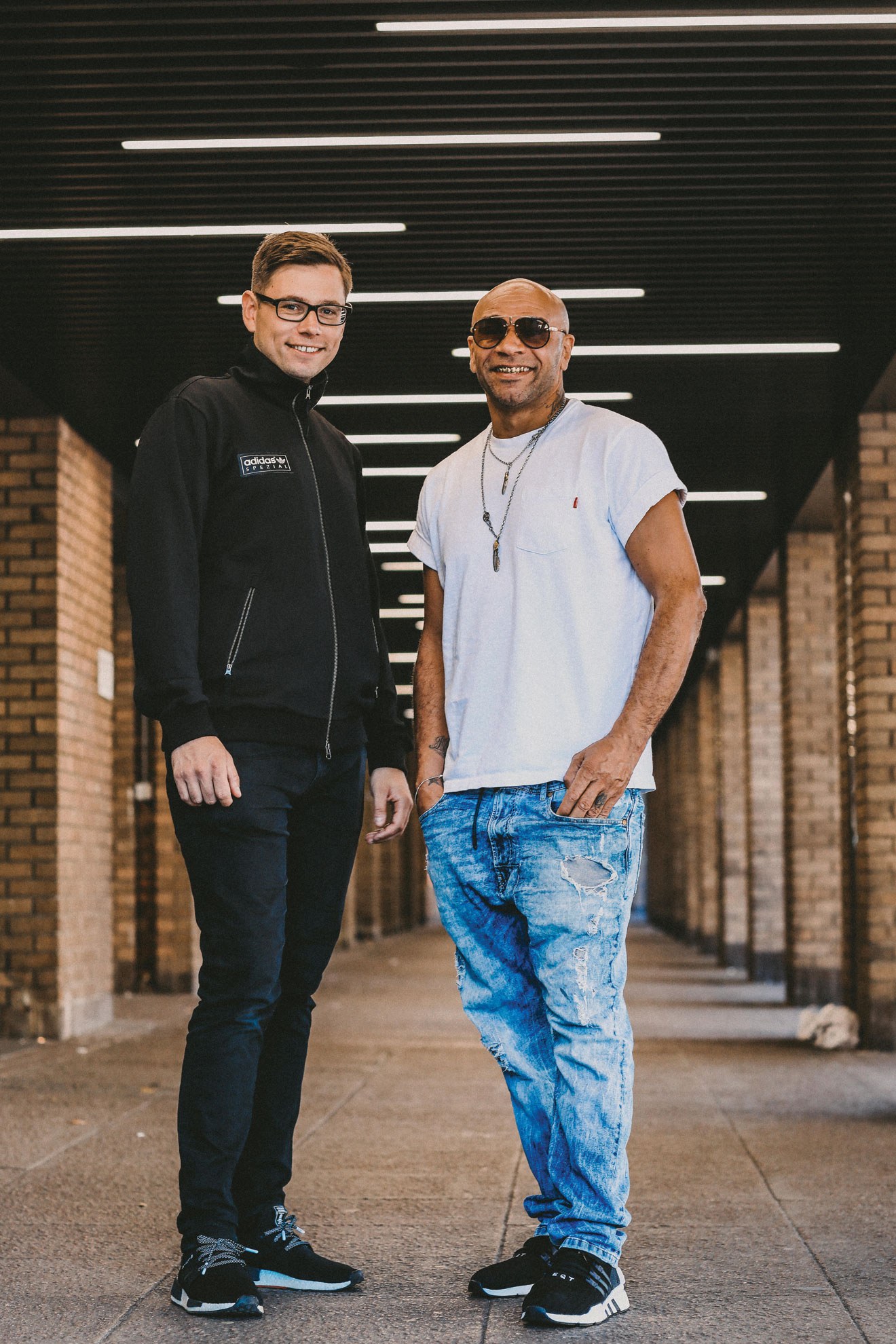 The whole thing clearly took on a life of its own. Indeed, the problem for Mixmag is keeping them focused on the debut album because they’ve already laid down and titled its sequel which doesn’t even have a release date yet (‘Act Two – The Art of Simple Complexity’. “It’s jazzier”). They’re even well into preparing a third, ‘The Epilogue’ – “Not sure what the rest of the title will be but I like the idea of a triptych”. The pair are fired up, talking about all three.

Goldie emanates the kinetic energy of a mind that won’t sit still. With his Canadian-Japanese-Dutch wife Mika sitting nearby and his six-year-old daughter Coco regularly hopping onto his lap, he attacks a matcha green tea brownie with two wooden spoons, his train of thought often spinning in multiple directions at the same time. At one point he leaps up and, walking up and down, starts loudly singing his 1998 hit ‘Temper Temper’ into his phone, oblivious of everyone – something to do with arranging a live performance.

James Davidson, on the other hand, has the calm of a craftsman, a counterpoint to his partner’s scatter-shot liveliness. Where Goldie’s career has rampaged across the decades, from seminal 90s d’n’b to David Bowie to James Bond films, from the 1980s graffiti/breakdance scene to 21st century reality TV to an MBE, Davidson’s only began much more recently, a part of the Metalheadz stable with his critically acclaimed Ulterior Motive duo, with Greg Hepworth.

To the wider world, Goldie is one of dance music’s most high profile figures so it might seem strange that he should chose to share equal billing for the first time, aged 52, with a relative unknown. After all, he could just have had Davidson work as a credited engineer, as he did on ‘The Journey Man’. Goldie is quick to counter such ideas.

“There is no glass ceiling to what this guy can do,” he explains. “I’ve always seen music – synaesthesia plays a big role in that. The fact is that James can see it too, he gets it. Engineers look at the screen, where I look at the whole canvas – and so does James. He can design sounds as fast as I can think of them. I was in Kuala Lumpur and had left him with an early sketch for a track, and then he came back with this awkwardly good arrangement – too good! It made me want to race back and get in the studio.” 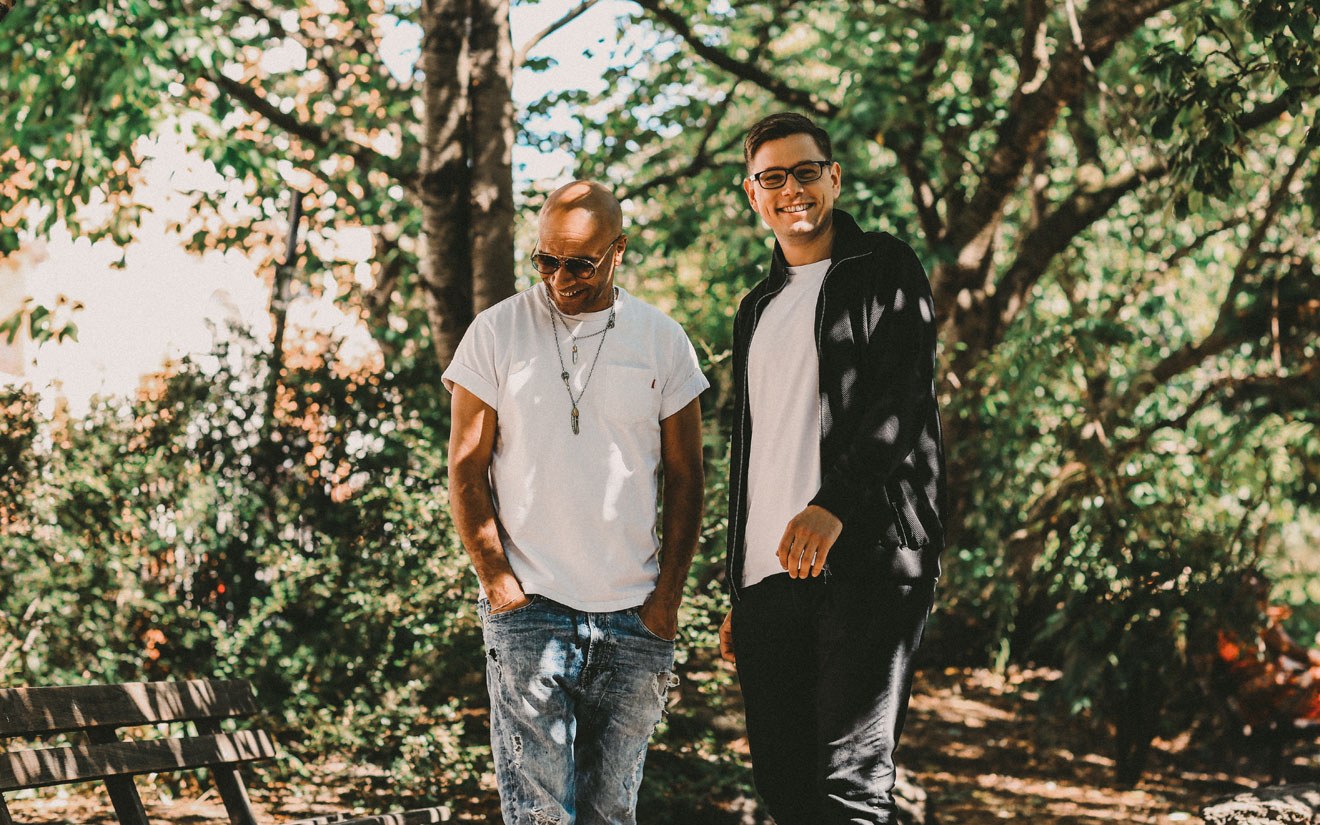 When Mixmag puts it to him that many producers might call in from Kuala Lumpur to see how ‘their’ tune was going and would just be happy to hear things were progressing while they weren’t there, Goldie’s having none of it.

“Fuck that,” he spits; “That’d do my nut in – couch potatoes ordering crisps and sandwiches from their mum while someone makes a track for them. Never been me. I’ve always lived with that bane of people going, “He’s not an engineer, he doesn’t make the tracks.’ Rob Playford did not make ‘Timeless’; Goldie made ‘Timeless’. The fact is, I write my music.”

And James Davidson, originally from Lymington near Bournemouth, is happy to back that up. He explains their process: first he heads over to the Phuket region of Thailand where Goldie now lives and has a studio.

“Thailand really is a factor,” he says. “You open the studio door, two double glass basement windows, and it’s just the jungle. That’s why the music isn’t dark and angry; it’s peaceful and connected with earth. We have quite different musical upbringings, but Eno crosses over so, for instance, on ‘Re-Entry’ we put a NASA video feed time-lapse going over the earth on one monitor, and scored to that rather than just write a tune. ‘Re-Entry’ follows on from ‘Silent Running’ and the idea is that ‘Silent Running’ is orbiting the earth, then ‘Re-Entry’ uses a lot of the same sounds but with a techno twist, coming back through the atmosphere, burning up. We worked on it all together.”

‘Act One’ wanders about musically. ‘Re-Entry’s chugging rhythm and Africana recall the likes of Damian Lazarus, while opener ‘Midnight Monsoon’ is more of an ambient jazz affair, alive with found sounds from Goldie’s Thai retreat, sea and cicadas, and by the end there’s even a ballad-style slowie, ‘Landscape – Portrait’. The overarching feel throughout is jazz and soul filtered through a modernist electronic sensibility, rather than bangin’ drum ’n’ bass. Vocalists play a key role, including established singers such as Natalie Duncan, Tyler Daley (of Children Of Zeus) and Terri Walker, and there are contributions from Jon Dixon of Detroit techno legends Underground Resistance. The album is also accompanied by four videos by Flying Lotus’ visuals wizard David Wexler, drawing influence from cinematic eco-collage masterpieces such as ‘Baraka’ and ‘Microcosmos’.

“It’s the first time I’ve had fun making music rather than making it through wretched trauma,” Goldie laughs; “That’s what happens when you do music at 100 BPM – it’s fucking easy!”

“Yeah, I’ve found my drum ’n’ bass has got a lot angrier because of all the nice stuff we’re doing,” James adds; “It gets it out of my system.”

A Goldie project as whimsical as Wes Anderson? It’s not what we were expecting, but we’re more than a little intrigued.

‘Act 1: Music for Inanimate Objects’ by Subjective is out now on Sony Masterworks